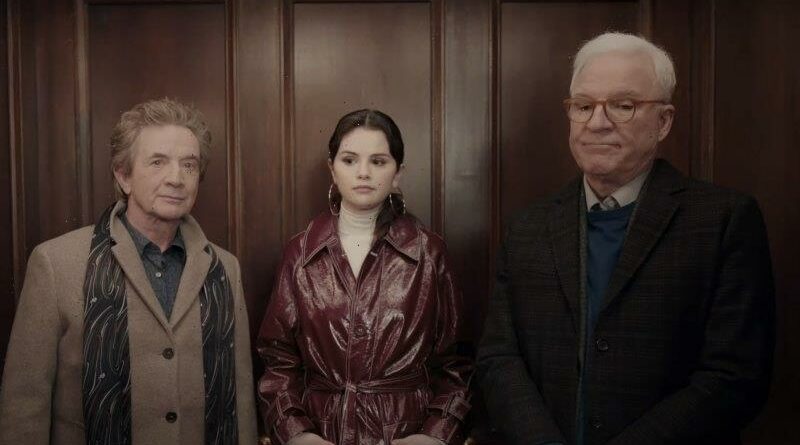 Spoiler alert: The following contains major spoilers from the season one finale of Only Murders in the Building”.

Oliver was right to be suspicious of Jan all along.

In the Season 1 finale of Only Murders in the Building, Amy Ryan’s pun-spouting bassoonist is revealed to have been Tim Kono’s (Julian Cihi) killer. She poisoned and shot him when her lonely neighbour ended their torrid affair.

But is that really all that happened? The finale of Hulu’s delightful murder comedy starring Steve Martin, Martin Short and Selena Gomez, about three acquaintances who start a podcast to investigate the death of one of their neighbours, at first appeared to answer all the fan questions about the murders in the New York apartment building, but after a twist ending (and some general unease from the characters), it appears the mystery may not be as fully solved as it first appeared. But don’t worry, the series has already been renewed for a second season. 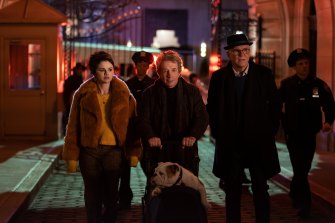 Selena Gomez, Martin Short and Steve Martin share an obsession for crime in the comedic murder-mystery Only Murders in the Building.Credit:Craig Blankenhorn/Hulu

Only Murders is one of the year’s most enjoyable shows, mixing its detective elements with light humour and an appealing trio of Gomez, Martin and Short as Mabel, Charles and Oliver, respectively. The finale doesn’t disappoint: It (sort of) wraps up the whodunnit; finds Martin flopping around on the floor for several minutes; gives Ryan an evil monologue and sets up a new dilemma for our podcasters to try to weasel their way out of in a second season. It’s an engrossing and very funny half-hour.

One major improvement to the season would have been not to start it with a flash-forward to Mabel standing over a bleeding body. As I watched the finale, I was anticipating the twist rather than shocked by it. I know barely anything more about why Mabel accidentally killed condo board president Bunny (Jayne Houdyshell) than I did in the premiere. But there’s always time in the second season to fix little problems.

The finale opens with Mabel and Oliver rushing to tell Charles of their suspicion that Jan was sleeping with Tim, and thus might be responsible for his death. That follows Charles catching Jan in a lie about her position as first bassoonist for the symphony. 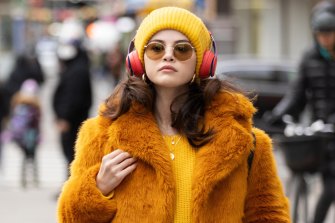 But Charles doesn’t want to believe his girlfriend is a killer. He kicks out Mabel and Oliver, but they decide to search Jan’s apartment. Charles is stewing at home when Jan shows up at his door, apologising for lying about the symphony. She makes Charles a drink, grabs some ice for his bloody nose and the pair sits down to talk. At first, Charles pretends he doesn’t believe Jan is the killer, but when she asks why he’s not drinking his cocktail, he accuses her of the crime and she gleefully confirms she’s the culprit. At the same time, Oliver and Mabel discover a stash of poisons in Jan’s apartment.

Charles lays out the case against Jan and gets her to further elaborate on her crimes, but then his speech starts to slur and he collapses. Jan poisoned the handkerchief she wrapped around the ice for his nose. She leaves him collapsed on the floor, and suggests she plans to flood the building with gas. Charles has just enough fight left in him to get to his phone, which recorded Jan’s tirade (presumably both for the podcast and the police). Although it’s not all good news: He also accidentally makes Siri play Fields of Gold by Sting, giving the singer one last hurrah in the series.

Charles crawls his way into the elevator, just missing Mabel and Oliver, who come to rescue him. He’s a mess on the floor, but the other building residents and the doorman assume he’s drunk. Mabel and Oliver finally find him and discover that Jan has leaked gas in the building. They load Charles onto Oliver’s dog stroller and head to the basement to try to repair the leak, but are greeted by Jan with a gun pointed at them. Mabel tackles her (and punches her in the face for killing Tim). The police come, arrest Jan and Charles gets taken to the ER. Bunny reluctantly agrees to let the trio stay in the building, and Mabel and Oliver unleash a few choice insults for her. 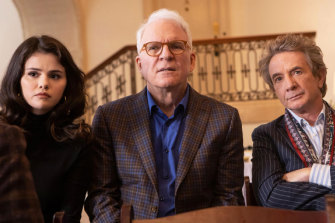 Everybody then gets their happy ending: Oliver reconnects with his son; Mabel and Oscar (Aaron Dominguez) are in love; and Charles reaches out to Lucy, the daughter of his ex that he misses after their bad breakup. The podcast wraps up with a sentimental finale and a Champagne toast on the roof.

Of course, anyone wondering how Only Murders could return for a second season, or what that flash-forward scene in the premiere was really about doesn’t have to wonder for long. Mabel points out there are still some loose ends, but Oliver waves off her concerns. In the middle of their toast, Mabel runs downstairs to grab more bubbly from her apartment as sirens sound in the distance. Charles and Oliver receive text messages from an unknown number that read, “Get out of the building now!!!” They run downstairs to get Mabel.

But that’s when they find her, covered in blood over a body in a tie-dyed hoodie. It’s Bunny in an Only Murders podcast hoodie. Mabel says her death was an accident; Bunny stumbled into her apartment and fell onto her large knitting needle. But before anyone can process the news, the police burst in and arrest all three of them. Mabel, Charles and Oliver are marched out in handcuffs in front of the whole building and podcast extraordinaire Cinda Canning (Tina Fey) and her assistant, who suggests a new podcast titled Only Murderers in the Building, which Cinda immediately steals.

Ant that’s where the episode ends. But Mabel was right: There are unanswered questions. How many other people did Jan murder? Was she really just a crazed serial killer, or was there something bigger at work? Why would Bunny wear the sweatshirt for a podcast she hates? Who texted Charles and Oliver? Who tipped off the police so quickly? And who will walk Oliver’s dog while he’s in jail?

Like many a true-crime podcast, Only Murders will attempt to outdo itself in a second season. Let’s hope it goes better for the Hulu comedy than it does for most pods.

Only Murders in the Building streams on Disney+.