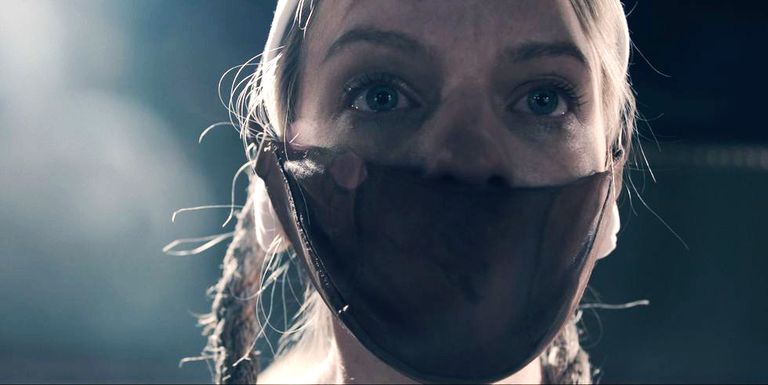 Author Margaret Atwood regularly points out that The Handmaid’s Tale is not a work of science fiction. Everything that happens in the dystopian world of Gilead has really happened at some time in history, somewhere in the world. And the blood-curdling opening minutes of this week’s Season 2 premiere are no exception.

As the episode picks up, June’s ambiguous fate at the end of Season 1’s finale seems about to be resolved in the darkest possible way. June and a group of other handmaids are muzzled and herded into a mysterious location which turns out to be Boston’s iconic baseball field, Fenway Park. There, a row of nooses awaits them. In an agonizing, extended sequence, the camera lingers on the handmaids’ helpless terror, their faces frozen in the absolute certainty that they’re about to die—until the lever is finally pulled and nothing happens. This was a mock execution, yet another of Aunt Lydia’s inventive forms of torture, but also a very real method employed by regimes in the world today.

Shworunner Bruce Miller told BAZAAR.com that the inspiration for the scene came out of asking what would realistically happen in a regime like Gilead, which needs to generate terror without actually harming its handmaids and their viable ovaries. As illustrated by Aunt Lydia’s “let this be a lesson” speech directly afterwards, mock executions can also be used to inspire gratitude and subservience in captives, who expect to be killed only to be spared at the last moment.

“We looked into cultures that exist now that are like Gilead, and how they threaten people, how they punish people – especially people they don’t want to hurt physically,” Miller said, noting that mock executions have been used as a form of torture for hundreds of years. “Many of our people who were taken hostage in Iraq, every morning they’d take them out and pretend to shoot them. They line you up, and you’d hear guns, you’d hear ‘one two three,’ and then they take you back to your room.”

There are numerous real-world examples of this horrific practice. British computer expert Peter Moore, who was kidnapped in Iraq in 2007 and held captive for more than two years, revealed that he and the four security guards captured along with him were subjected to regular mock executions, which saw them “placed on their knees, blindfolded, a gun pointed to their heads and a different gun firing off elsewhere in the room.”

Following his abduction in 2012, American journalist James Foley was one of many prisoners subjected to mock executions by ISIS. His former cellmate Didier Francois recalled “seeing Foley, a Catholic, forced to pose against a wall as if he was being crucified.” Spanish journalist Javier Espinosa, who was abducted by ISIS extremists in 2013 and held for six months, said that his captors “took pleasure in telling their more than 20 hostages each day that they would be beheaded.” Counter-terrorism officials have concluded from scrutinizing video footage of ISIS hostages that “some captives appeared compliant before being killed because they had already faced repeated mock executions on camera.”

As viscerally upsetting as that opening scene is, The Handmaid’s Tale doesn’t traffic in sadism for its own sake. Every horror depicted in the show highlights something real about the world—sexual slavery, female genital mutilation, mock executions—and is all the more powerful for it.