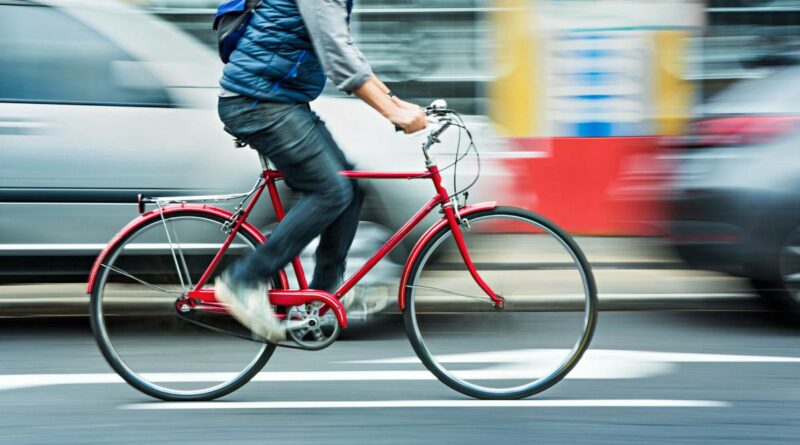 One of the first news stories I read this morning was one that hit pretty close to home. Australian news broadcaster Paul Barry posted confronting images of himself in hospital after being hit by a car while cycling.

The host of ABC’s Media Watch programme posted an image of himself to Twitter, showing his arm in an extensive cast. In his caption Barry apologised that he wouldn’t be on air as he was suffering a broken hand and pelvis after “a thoughtless driver backed into the road without looking and cleaned me up on my bike as I rode to work”.

Barry’s tweet made me feel almost nauseous as I myself commute to work on a bike and so does my husband.

A few months ago a received the call that no wife and mother of two ever wants to get, my husband had been hit by a car. I frantically herded the kids into the car and cruised busy Auckland streets searching for him. We found him waiting in a near empty carpark in the rain, blood pouring from his hand and leg.

Luckily the injuries were fairly minor and my lycra-wearing better half recovered within a few weeks. On this occasion the motorist was considerate, supportive and downright mortified about the accident. They stopped, waited ’til they knew help was coming and even covered the costs of repair to my husband’s bike. It was an honest accident, but one that could be avoided if drivers remember one crucial thing every time they are on the road: “Is there a cyclist coming?”

I know this article is going to be unpopular. I know this for a fact as I experience the intense motorist hatred toward cyclists almost every time I get on my bike. Sure, there are near misses where the driver just didn’t see me or was on their phone. I can almost forgive those. Then there is the verbal abuse and the vehicles who deliberately get as close as they can to hitting you so they can make a point. I am not sure what the point is though. The message is a little lost on me as I worry about staying on my bike and not dying.

Here’s what motorists need to know about cyclists. We don’t want to be on the road and getting in your way. Wherever possible I use protected cycleways. If that is not possible I keep to the bus lanes. Over my 10km commute to work I am “in the way” of cars for about 1km of that. I don’t cycle wedged between monolith trucks, buses, vans and SUVs for fun or to contribute to anyone’s road rage. I cycle amid traffic only when it is the only option available to me.

In spite of my best efforts to stay out of every motorist’s way, I am constantly met with derision, rage and such vehicular disregard that I have feared for my life on many occasions.

There was the time I was turning right at lights. I pulled into the little bike spot at the front of the lane (I am allowed there, there is literally a green square and a picture of a bike to prove it). Somehow I could sense that the van behind me was not pleased with my presence so, when the light went green, I peddled for my life, trying to get out of his way as fast as I could. Rather than allowing me to turn right and move safely over to the bus lane with my nerves intact, the driver sped up ’til he was almost touching my rear wheel and then slammed on his brakes and issued a colourful string of expletives. I was shaken and gobsmacked. I was in his path for about 10 seconds, but me being there enraged him so much he risked hitting me and then took pleasure in abusing me.

In my experience I am usually faster to take off at lights than most cars, so I am certainly not holding up traffic. So what was it that made van man so angry? I have thought about this a lot and my theory is that motorists sense the vulnerability that we cyclists have every time we go out on the road and it makes them uneasy. In their large cars they see us off to the left and they want to pass us but they are not sure how close they should get. Their tension mounts. They have been sitting in traffic for 20 minutes before they encounter a cyclist. Their tension mounts. They have had an awful day. Their tension mounts. Eventually the geyser erupts and I am in the firing line.

Of course, as The Simpsons taught us, some people are just jerks. Ultimately though, I don’t believe any driver wants to be responsible for purposely injuring or killing someone.

I am truly fascinated by the drivers who seethe with hate towards me and the ones who are patient and considerate. There seems to be little to no rhyme or reason. I have noticed that truck drivers are very considerate, while I have had more than one very scary run in with a tradie in their work van. I have been screamed at by a middle-aged woman who informed my that I was “a bike, not a car” as though that fact had somehow slipped my mind (for the record there were road works on both sides and I literally had nowhere else to go).

If you have made it this far you are probably wondering why I am still committed to my two-wheel commute when it is dangerous and, at times, downright scary. There are many reasons, but the main one is a practical one. Cycling is the fastest way for me to get to work. It takes me half the time my bus does – it likes to ramble around Mount Eden before arriving in the city. It takes me roughly about the same time as driving, but I am getting exercise, not sitting in traffic, not emitting exhaust fumes and I don’t have to pay for parking. It is also really fun and a great de-stress after a busy day.

What am I hoping to get by writing this piece? Well, in addition to acknowledging Paul Barry’s painful injury and wishing him well, I want to ask a favour of New Zealand drivers. Every time you are in your car just take an extra second to look for a cyclist before you pull out, stop suddenly, turn or reverse out of your driveway.

Cyclists are not your enemy, in fact we are fairly passionate about doing our part to reduce traffic congestion. So, next time you have a cyclist holding you up for a moment or two, just imagine them as someone you care about. Envisage the person on that bike as someone you really don’t wish pain and misery upon and give them a little space.

Also, if you find yourself needing to scream expletives at a total stranger on the road there are some very good therapists around, you might want to look one up.