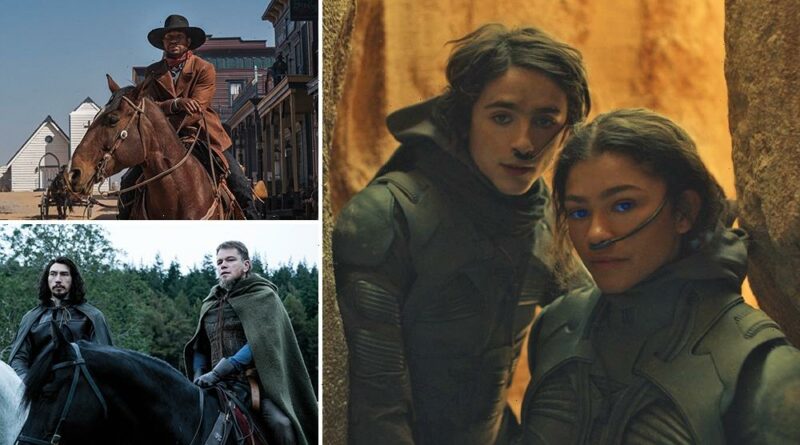 The Academy’s music branch was particularly broad-minded for this year’s Oscar shortlist, choosing 15 scores that run the gamut from conventional to experimental, echoing ancient times as well as anticipating the music of the future.

Academy voters were especially encouraging of women (one score) and people of color (four), statistics that are heartening and may bode well for the nominations themselves.

At this point, “Dune” would seem to be the front-runner, as Denis Villeneuve’s adaptation of the Frank Herbert sci-fi classic has been acclaimed for many of its craft accomplishments. Veteran composer Hans Zimmer (already an Oscar winner for “The Lion King”) pulled out all the stops, including months of experimenting with women’s voices, having instruments designed and built, and merging it all with world-music and synthesized sounds appropriate for the desert planet Arrakis.

Also high on many lists are two Jonny Greenwood scores: “The Power of the Dog” and “Spencer.” They are equally creative and original in concept. “Power of the Dog” has Greenwood playing a cello like the banjo that  Benedict Cumberbatch’s character plucks  throughout the  film, adding the period sounds of a mechanical piano. For “Spencer,” the Radiohead multi-instrumentalist arranged a musical collision between a traditional baroque ensemble (for the royals) and a jazz group (for Princess Diana).

The sole animated film to make the shortlist is “Encanto,” which also boasts the only woman: Mexican-American composer Germaine Franco — who earlier had orchestrated “Coco” — supplied the colorful sounds of Colombia for the popular Disney film. She enlisted dozens of Latin American musicians and singers to achieve an authentic Colombian backdrop.

“Parallel Mothers” marks the 13th feature collaboration between director Pedro Almodóvar and Spanish composer Alberto Iglesias (everything from “All About My Mother” to “Talk to Her”). This is perhaps the most classically styled of all this year’s contenders, boasting a rich string section and parts for piano and woodwinds, all serving the story about two disparate women whose lives become intertwined after they give birth for the first time.

French composer Alexandre Desplat is in the race with his fifth film for Wes Anderson (he’s been nominated for three of them, and took home the Oscar for “Grand Budapest Hotel”). This time piano is the central instrument, played by classical artist Jean-Yves Thibaudet, but — as is typical of Anderson’s quirky scenarios, this one set in a 1960s fantasy France — there are also offbeat instruments ranging from harpsichord to banjo.

Other previous Oscar nominees could also return to the competition. Nicholas Britell (“Moonlight”) has “Don’t Look Up,” Adam McKay’s satire on government, social media and the news, soundtracked by a wild blend of raucous big-band jazz, heroic orchestra and fun electronics. And Carter Burwell (“Carol”) designed the “Tragedy of Macbeth” score to be appropriately dark and disturbing, mostly for lower strings — to accompany, but not interfere with, Shakespeare’s classic dialogue — and an offbeat solo fiddle for the witches.

Two films set in medieval times merited attention. Harry Gregson-Williams’ “The Last Duel” combines lute, a consort of viols (precursors to modern stringed instruments), organ, soloists and choir for Ridley Scott’s examination of sexual assault in 14th-century France. Gregson-Williams, shockingly, has never been Oscar-nominated, despite great work on other
Scott films from “Kingdom of Heaven” to “The Martian,” and maybe it’s time.

For “The Green Knight,” composer Daniel Hart spent months researching Middle English poetry in order to create authentic-sounding period songs for an Arthurian tale of 15th-century England. He also learned how to play the Scandinavian nyckelharpa to add a raw, ancient string sound to the score.

Kris Bowers’ music for “King Richard” (with Will Smith as the determined father-coach of future tennis stars Venus and Serena Williams) emphasizes rhythm throughout, both in its propulsive string pieces to accompany tennis matches and in his modernist use of “prepared piano,” placing objects (including putty, ping-pong balls, nails, clothespins and felt) inside the instruments to make unusual sounds.

For “Being the Ricardos,” English composer Daniel Pemberton turned to a “classic” Hollywood style of large orchestra and strong melodic themes to nostalgically echo the 1950s showbiz setting for Lucille Ball and Desi Arnaz during a particularly fraught week of production on “I Love Lucy.”

A second Zimmer score made the shortlist: the James Bond film “No Time to Die,” co-written by frequent Zimmer collaborator Steve Mazzaro. Bond films require plenty of music, much of it high-octane action material, although this installment also had its share of tragedy. If nominated, it would be only the third of 25 Bond films to make the cut in the Oscars’ score category.

Jeymes Samuel’s “The Harder They Fall” is unusual in that he is not only the composer but also the writer and director of the film. His score for the revisionist Western incorporates conventional ideas (guitars, harmonica, orchestra) as well as elements of gospel, reggae and hip-hop. While no composer-director has been nominated for a score since Charlie Chaplin’s “Limelight” in 1972, Chaplin did win that year. (The 1952 “Limelight” was not released in Los Angeles until 1972; under Academy rules at the time, it was allowed to compete.)

The longest shot in the field may be the horror remake “Candyman,” an electro-acoustic soundscape by Robert Aiki Aubrey Lowe that incorporates processed vocal sounds and electronically altered sounds that he recorded at the Chicago filming location.