Home » Lifestyle » Our Yorkshire Farm: Who are Amanda and Clive Owen’s nine children? 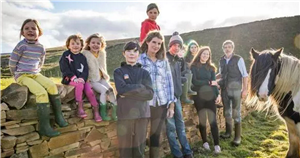 Amanda Owen and Clive Owen soared to fame on Our Yorkshire Farm.

The popular Channel 5 reality show follows the lives of farming parents Amanda, 47, and Clive Owen, 66, and their large family in the Yorkshire Dales.

However Amanda recently announced the news that she and Clive had made the difficult decision to split after a 22 year marriage.

Despite it all seeming like a wholesome dream to many, the eldest daughter of Our Yorkshire Farm 's Clive says there's a "secret rift" and she has been cut off from her family.

"Millions tune in to see this idyllic farm on the TV but they don’t know the heartache behind it," Rosie, 34, said.

She has fond memories of her life on Ravenseat farm with her parents and older brother, but the bond between her stepmum Amanda and her dad Clive is beyond repair.

Rosie said when she looks back, she remembers jumping in cow pats and going on long walks within her family's 2,000-acre "dream farm".

Clive's daughter Rosie – from his first marriage – added to The Sun that her relationship is so bad with her father, she finds it difficult to drive past their farm in the Yorkshire Dales.

Their relationship hasn't been the same since it all came crashing down in 1995 when her parents split after 13 years of marriage after "falling out of love".

Both Amanda and Clive found a love of farming outside of family entanglements and instead pursued it as a career and a lifestyle contrary to what their parents had planned for them.

Amanda left her modelling career behind against her mother’s will to continue farming after she got a taste for it when she completed the James Herriot books. Since she read the book on hill shepherding, the mum-of-nine set to work to build her dream life as a farmer with work experience on several farms.

It was through this work that she met her husband Clive after she was sent to collect a ram from his tenanted sheep farm at Ravenseat farm in 1996, and love quickly bloomed between them.

The couple tied the knot together in 2000 and in their happy marriage they gave birth to their nine children also home to their 1,000 sheep, 40 cows, six dogs and four ponies on the farm.

Although they didn’t intend to have a family so large, each member has fit in perfectly with their “free-range” lifestyle which includes no TV and no phones with their main source of income thriving from their 2,000-acre farm.

Despite the fact that both parents come from non-farming backgrounds, the family have built quite the idyllic lifestyle together, with their children just as interested to get stuck in to the outdoor work as they are. The animal loving family appear to enjoy their lives together as they tend to their impressive farm and live on a remote hill in the Yorkshire Dales far away from the distractions of modern life.

It is based more than three miles west of Keld, in Swaledale and is known as one of the most remote farms in Britain.

The farm marks the exact halfway point along the famous 182 mile Coast to Coast walk between St Bees on the Irish sea to Robin Hood’s Bay on the North Sea which is a very popular destination for walkers.

The secluded haven is open to the general public and serves cream teas to visitors at their much-loved home, but because it is so remote and the constant demands farming life requires, the family ask that visitors email ahead of their visit.

Releasing news of their split, Amanda and Clive put out a lengthy statement which read: "Although we are no longer a couple, we continue to work on the farm and co-parent together with our number one priority the happiness and well-being of our children."

The couple went on to thank everyone for their support, while asking for privacy during this time.