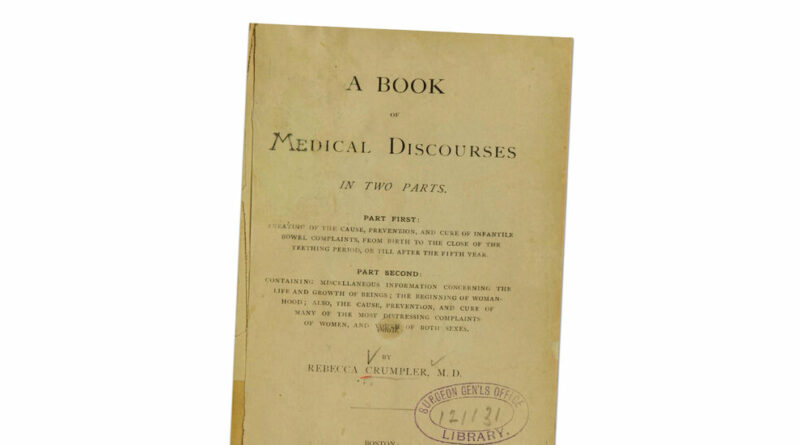 This article is part of Overlooked, a series of obituaries about remarkable people whose deaths, beginning in 1851, went unreported in The Times.

For more than 125 years, people trampled — unknowingly — across the grass where Rebecca Lee Crumpler rests in peace alongside her husband, Arthur, at Fairview Cemetery in Boston.

Her burial plot was devoid of a gravestone even though she held a unique distinction: She was the first Black woman to receive a medical degree in the United States.

It would take more than a century, from her death in 1895 until last year, for Crumpler to be given proper recognition by a group of Black historians and physicians. Were it not for them, she might still be languishing in anonymity.

They had learned of Crumpler through the Rebecca Lee Society, a support group for Black women physicians in the 1980s, now believed to be defunct, that would occasionally roam the tree-lined grounds of the cemetery, near the edge of Mill Pond, in the Hyde Park neighborhood, looking for any evidence of her plot. People knew she had died in that neighborhood, and had consulted city records, but all they found was a brown patch of dirt where a gravestone should have been placed after interment.

Since her death, Crumpler’s legacy has been muddled by incorrect information. Some mistakenly thought that she was the second Black woman to be awarded a medical school degree, after Rebecca Cole, but Cole graduated from the Woman’s Medical College of Pennsylvania three years after Crumpler earned her degree from the New England Female Medical College (now part of the Boston University School of Medicine) in 1864.

Several books and articles have featured photographs of a woman purported to be Crumpler, even though no pictures of her are known to exist. In “Gutsy Women,” a 2019 book by Hillary and Chelsea Clinton that celebrates historically significant women, there is a photo alongside an entry on Crumpler — but it is actually a photo of Mary Eliza Mahoney, the country’s first Black licensed nurse.

After the Civil War, Crumpler worked for the medical division of the United States Bureau of Refugees, also known as the Freedmen’s Bureau, an agency created by Congress during Reconstruction to provide services for emancipated slaves whom white physicians refused to see. But throughout her life, she was ignored, slighted or rendered insignificant, even invisible.

Because of her race and gender, Crumpler was denied admitting privileges to local hospitals, had trouble getting prescriptions filled by pharmacists and was often ridiculed by administrators and fellow doctors. Still she persevered, with the knowledge that Black communities had an increased risk of illness because they were subjected to difficult living conditions and a lack of access to preventive care.

“She focused on prevention, nutrition and attaining financial stability for one’s family, all relevant factors today,” Melody McCloud, an obstetrician-gynecologist in Atlanta, said by phone. “Dr. Crumpler was a pioneer who blazed a trail upon which many other Black female physicians have trod, and now tread.”

McCloud, who urged Gov. Ralph Northam of Virginia to declare March 30, 2019, Dr. Rebecca Lee Crumpler Day — and who is trying to get a monument for Crumpler erected in Richmond, where she practiced medicine from 1865 to 1869 — was also a curator of an exhibition about Crumpler’s career at the Boston University School of Medicine.

Rebecca Crumpler was born Rebecca Davis on Feb. 8, 1831, in Christiana, Del., to Matilda Weber and Absolum Davis. She explained her initial interest in healing in “A Book of Medical Discourses” (1883):

“Having been reared by a kind aunt in Pennsylvania, whose usefulness with the sick was continually sought, I early conceived a liking for, and sought every opportunity to be in a position to relieve the sufferings of others.”

After marrying Wyatt Lee, a Virginia laborer, in 1852, she relocated to Charlestown, Mass. She worked as a nurse there, assisting several doctors in the Boston area. They in turn supported her application to the New England Female Medical College, where she was awarded a state-funded scholarship.

After two years, however, she took a leave of absence to care for her ailing husband, who died of tuberculosis in 1863. She returned seven months later to complete her final term but was nearly stymied after some faculty members expressed reservations regarding the amount of time it had taken her to complete her coursework.

Several of the school’s patrons who were involved in the abolitionist movement offered their support. On March 1, 1864, the trustees voted to confer on her a “Doctress of Medicine” degree. She was 33.

At the time, said Vanessa Northington Gamble, a physician, historian and professor at George Washington University, there were 54,543 physicians in the country; 270 of them were women — all white — and 180 were Black men.

The New England Female Medical College would close in 1873 without ever conferring another medical degree on a Black woman.

In 1865, Rebecca Lee married Arthur Crumpler, who had arrived in Boston three years earlier as a fugitive slave and later worked as a porter. The couple had one daughter, Lizzie Sinclair Crumpler, in 1870, but she is believed to have died young.

By 1869, the Crumplers had moved back to Boston. They lived in the North Slope of Beacon Hill, then a predominantly Black community.

“A cheerful home,” Crumpler wrote, “with a small tract of land in the country with wholesome food and water is worth more to preserve health and life than a house in a crowded city with luxuries and 20 rooms.”

Her house, at 67 Joy Street, now has a plaque honoring her and is a stop on the Boston Women’s Heritage Trail.

From that house, Crumpler treated mostly women and children, regardless of their ability to pay. Her book, dedicated to nurses and mothers, is seen as a precursor to “What to Expect When You’re Expecting” (1984), considered the prenatal bible for countless pregnant women. It is full of admonishments.

“Children should not be asked if they like such and such things to eat, with the privilege of choosing that which will give them no nourishment to the blood,” Crumpler wrote. She also said, “Parents should hold onto their children, and children should stand by their parents, until the last strand of the silken cord is broken.”

An article in 1894 in The Boston Globe described her book as “valuable” and Crumpler as “a very pleasant and intellectual woman” and “an indefatigable church worker.”

In 2019 Vicki Gall, a history buff and president of the Friends of the Hyde Park Library, began a fund-raising campaign to have gravestones installed for them both. They were added at a ceremony on July 16, 2020, which Gall led.

“I didn’t do this as a feel-good moment,” Gall said by phone. “It was a historical moment. She didn’t know the importance of what she was doing at the time, but we recognize it now.”

There is no more trampled grass near the resting site of Rebecca Lee Crumpler. Instead, there is an awakening of her contributions to the medical community. As she wrote in “A Book of Medical Discourses”: “What we need today in every community is not a shrinking or flagging of womanly usefulness in this field of labor, but renewed and courageous readiness to do when and wherever duty calls.”