‘This is wrong!’ Parents vent their fury at cheeky scene from new children’s movie Show Dogs in which a pup goes to a ‘zen place’ while he is having his ‘private parts’ examined

A children’s film about police dogs is being called out by parents and nonprofit groups who suggest it could normalize the sexual abuse of children.

The movie Show Dogs follows the story of Max, a police K-9 voiced by rapper Ludacris who has to go undercover at a prestigious dog show to rescue a baby panda that was stolen. The pup is subsequently immersed in a world of posh pooches and designer doggie spa treatments.

But one scene in particular has raised the hackles of a number of adult viewers. It sees Max being coached through what to do when dog show judges inspect his ‘private parts.’ Causing a stir: The new children’s movie Show Dogs has been criticized by parents for endorsing ‘unwanted genital touching’ 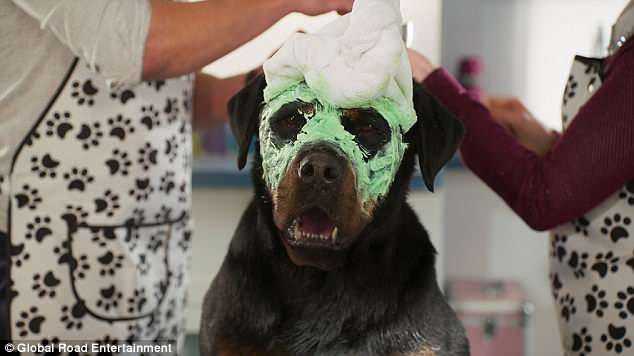 Working hard: The movie stars rapper Ludacris as the voice of Max, a K-9 that has to go undercover at a dog show in order to crack a case about a missing baby panda

Terina Maldonado, the mother behind the Macaroni Kid blog was one parent left horrified by the scene. In her review of the film, she described the events in detail.

‘The day of the finals come and if Max doesn’t let his private parts be touched, he may lose the competition and any hope of finding the kidnapped panda. It all rests on his ability to let someone touch his private parts,’ she wrote.

‘The judge’s hands slowly reach behind Max and he goes to his “Zen place.” He’s flying through the sky, dancing with his partner, there are fireworks and flowers — everything is great — all while someone is touching his private parts.’

The mother claims that the scene gave her immediate pause, and made her think: ‘This is wrong.’ 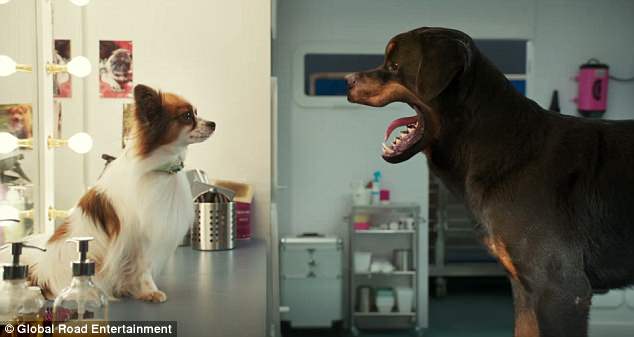 ‘Disturbing’: One scene from the film sees Max being prepared to have his ‘private parts’ inspected by the judges and told to go to a ‘zen place’ while it happens 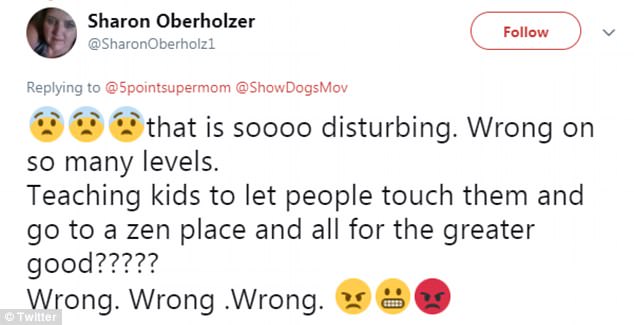 Worked up: Parents were left fuming over the scene, with claims that it could encourage children not to react if they were being abused

Questions: The news of the scene caused many parents to demand that the film be boycotted

Many parents felt the exact same way, taking to Twitter to evicerate the film’s writers and suggesting that the film be boycotted.

‘Show Dogs that new stupid kids movie has a dog that has to get used to people fondling his private parts? WTF? Why on earth would you put that in a kids movie?’ fumed one user.

Another added: ‘Wow my kids will not be watching this now. How can a children’s movie insinuate that it’s ok for someone to touch your private parts and just go into to your “zen place”. WTF.’

Others called the film ‘vile and disturbing 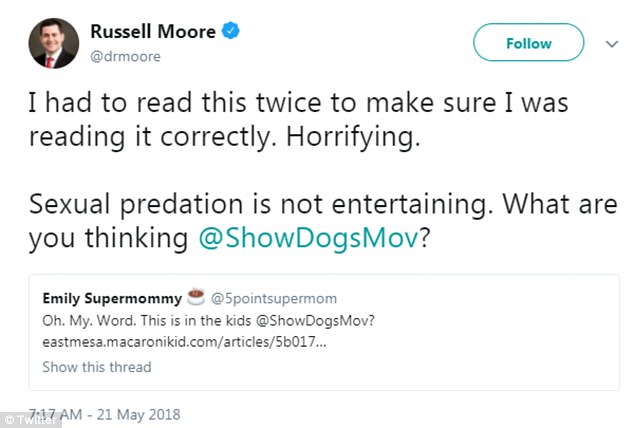 Higher ups: Evangelical ethicist Russell D. Moore was one of the Twitter users left horrified by the news Hitting out: The film was branded by pastor Matt Chandler as ‘vile and disturbing’ Explanation: In response to the upset, Global Road Entertainment claimed that the inspection was ‘depicted completely accurately as done at shows’ (stock image)

The National Center on Sexual Exploitation (NCOSE) also singled out this scene in its criticism of the film in a statement, saying that it could normalize ‘unwanted genital touching to its child audience.’

The statement, from NCOSE executive director Dawn Hawkins, wrote that the film has ‘multiple scenes where a dog character must have its private parts inspected, in the course of which the dog is uncomfortable and wants to stop but is told to go to a “zen place.”‘

The group claims that the the dog is rewarded for his passivity toward the touching in a way similar to the ‘tactics child abusers use when grooming children – telling them to pretend they are somewhere else, and that they will get a reward for withstanding their discomfort.’

The group added: ‘Children’s movies must be held to a higher standard, and must teach children bodily autonomy, the ability to say “no” and safety, not confusing messages endorsing unwanted genital touching.’

NCOSE is asking for the film to be pulled from theaters and recut to exclude the offending scenes related to unwanted touching.

In a response to the outrage, one of the companies behind the film’s production, Global Road Entertainment, explained to CNN: ‘The dog show judging in this film is depicted completely accurately as done at shows around the world; and was performed by professional and highly respected dog show judges.’

‘Global Road Entertainment and the filmmakers are saddened and apologize to any parent who feels the scene sends a message other than a comedic moment in the film, with no hidden or ulterior meaning, but respect their right to react to any piece of content.’