Home » Lifestyle » Pat Patterson, a Wrestling Star Who Came Out, Dies at 79 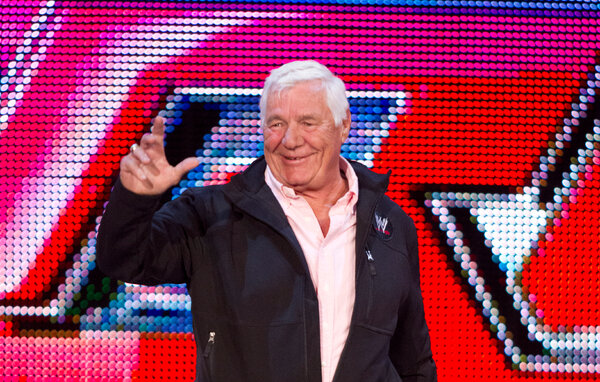 Pat Patterson, the first major wrestling star to announce that he was gay, died on Wednesday in Miami Beach. He was 79.

The cause of his death, in a hospital, was liver failure, said Bertrand Hébert, who collaborated with Mr. Patterson on his autobiography, “Accepted: How the First Gay Superstar Changed WWE” (2016).

After decades of working his way up through regional wrestling circuits in Montreal, Boston and San Francisco, Mr. Patterson found fame in the late 1970s, when he joined the World Wrestling Federation, which later became World Wrestling Entertainment.

In the ring, Mr. Patterson was fond of surprise. Normally cast as a “heel,” the wrestling term for a villain, he attacked opponents at the exact moment a fight began. He slipped off his belt and wielded it like a whip. Digging into his tights, his hand would emerge wearing brass knuckles. His theatrics often drew booing frenzies.

“Whether I was the good guy or bad guy, I always worked best when I was the one leading the dance,” he wrote in his memoir. “The magic of what we do in a wrestling ring follows the same principle as in a good movie when the hero is down. That desperation needs to register with the audience.”

At the height of his career, he was crowned the “intercontinental champion” and headlined matches at Madison Square Garden, perhaps most famously against the wrestler known as Sgt. Slaughter in 1981. Even as he seemed to be winning the fight, Mr. Patterson staggered around the ring, playing up his seemingly grave injuries. As he was being declared the winner, he lay on the mat, acknowledging victory only with a labored raise of his fist.

As his career in the ring slowed in the mid-1980s, he joined the World Wrestling Federation as an executive, putting matches together and working with wrestlers on their shticks. He invented the Royal Rumble, a last-man-standing free-for-all with new competitors entering at regular intervals. That format is still in use today.

He announced he was gay in 2014 during an episode of “Legends’ House,” a reality television show on the WWE Network in which retired pro wrestlers were sequestered together.

Even though his friends and some wrestling insiders knew about his sexuality, Mr. Patterson rarely discussed it and had never done so publicly.

“For once in my life, I’m going to be me now,” he said on the show. “I survived all this being gay. I lived with that for 50-some years.”

In 2015, WWE staged a “Pat Patterson Appreciation Night” in Montreal, his hometown. “Pat Patterson,” Mr. McMahon said that night, “was different in an era when different was not cool,” and he mentioned “his life partner, Louie Dondero,” whom Mr. Patterson had been with for 40 years. Alone in the ring, Mr. Patterson sang “My Way,” and the packed arena filled with chants of “Merci, Pat!”

He was born Pierre Clermont in Montreal on Jan. 19, 1941. His father, Gérard Clermont, was a milkman who later went to work for Canadair making airplane parts; his mother, Simone Lupien, was a homemaker. Pierre had four brothers and sisters and every night was relegated — tellingly, he wrote in his memoir — to a pullout bed in a closet, sharing it with a brother.

Pierre began idolizing wrestlers and training to become one at about age 14. Unable to afford tickets to fight nights, he would cadge ticket stubs from audience members at intermission and catch the second half of a show. On other nights he would sneak in by standing where the wrestlers parked their cars and offer to take their bags inside for them.

Pierre fought his first bout under the Anglophone name Pat Patterson in 1958. (He changed his name legally in 2009.) Early in his Canadian career, he recalled, he sometimes traveled to towns “near the end of the known world” and wrestled there for five dollars a night.

When he was 16, he discovered a gay bar. With his first gay sexual experience, he wrote in his memoir, he found two things that had been largely missing from his life: “tenderness and affection.” He wound up coming out to his father, who responded with an epithet and demanded that he move out.

After graduating from his high school in Montreal, École Jean-Baptiste Meilleur, Mr. Patterson found a suitcase in a garbage can and headed for Boston, where he had once introduced himself to a wrestling promoter.

He also met Mr. Dondero in Boston, and the two remained a couple until Mr. Dondero died of a heart attack in 1998.

Though Mr. Patterson encountered homophobia in professional wrestling, he also found acceptance. Mad Dog Vachon was one of several fellow fighters who made a point of befriending Mr. Dondero and encouraging Mr. Patterson to bring him along when they traveled.

He is survived by four siblings: Claudette Clermont-Paquin, Lise Clermont and Michel and Richard Clermont.

Coming out proved to be one of his happiest decisions, Mr. Patterson wrote. And it resulted in an encounter he treasured, in Los Angeles in 2014.

“A FedEx truck slammed on the brakes in the middle of the street as I was walking on the sidewalk,” Mr. Patterson recalled in his memoir. “The driver, who was a big guy, jumped out of his truck and came toward me to tell me he was gay, too. He gave me a big hug, thanked me again, took a picture, jumped right back in his truck and drove off.”