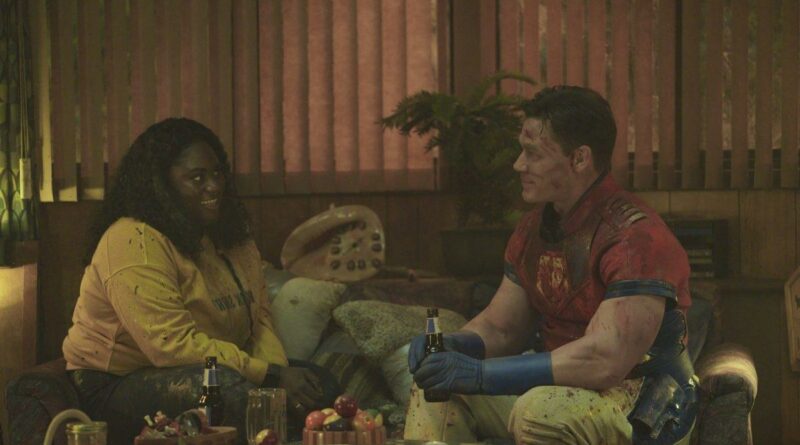 Peacemaker is rapidly approaching its final episodes, and things are heating up on the DC Extended Universe show as Project Butterfly continues to unfold. Episode 5 left Christopher Smith (John Cena) and his teammates feeling positive about their progress. However, their optimism is likely to be short-lived. When does Peacemaker Episode 6 come out on HBO Max?

Peacemaker Episode 5, “Monkey Dory,” sees the members of the DC show’s task force raiding a facility suspected of creating the gooey substance Butterflies feed on. And although the group goes into this dangerous new mission at odds with one another, they come out of it feeling on top. Even Peacemaker and Economos (Steve Agee) set aside their differences when faced with a near-fatal encounter with the Butterflies.

Taking down a group of the aliens — and a compromised gorilla — does wonders for the team’s morale. Even Harcourt (Jennifer Holland) is feeling the love as she creates the “11th Street Kids” group chat. Sadly, the comraderie is unlikely to last through Peacemaker Episode 6.

The end of “Monkey Dory” sees Adebayo (Danielle Brooks) planting a fake diary in Peacemaker’s home, something Amanda Waller (Viola Davis) has asked her to do. Whatever’s in the notebook, it stinks of betrayal — especially when you consider Adebayo’s reluctance to go through with her mother’s request.

There’s also the matter of Clemson Murn (Chukwudi Iwuji), whose secret came out this week. Adebayo couldn’t help but notice the butterfly in his head when she activated the x-ray vision on Peacemaker’s helmet. Unfortuantely, Murn caught her before she could do anything about it. She’s in some serious trouble heading into episode 6.

With the final interaction between Adebayo and Murn, Peacemaker Episode 5 leaves DC fans on a massive cliffhanger. Peacemaker Episode 6 will reveal what unfolds between the two. Given its title — “Murn After Reading” — viewers will probably learn more about Murn’s involvement with the Butterflies, as well as the true objective of Project Butterfly.

So, when does the sixth installment arrive? New episodes of the DC show hit HBO Max every Thursday, and there are only three of them left in season 1. Courtesy of Decider, these are the release dates for every episode of Peacemaker Season 1:

As for when fans can tune in for “Murn After Reading,” it should be available on HBO Max at 12 a.m. PST on Thursday. Those eager for answers to the series’ many mysteries may find themselves staying up next week. Will all the betrayals come to the surface?

Will the others find out about Clemson Murn in episode 6?

The biggest question heading into Peacemaker Episode 6 is whether or not Clemson Murn will be able to conceal his true identity from the rest of the task force much longer. If Adebayo disappears, the group is bound to get suspicious. And Peacemaker’s new helmet poses a serious problem for him.

That’s not the only betrayal that could come to the surface in the sixth installment. There’s also the matter of the fake diary. It’s not clear whether viewers will get answers about what Waller is up to in next week’s episode, but many are hoping for some clarity.

In the meantime, there’s plenty to look back on during the first five episodes of Peacemaker. All of them are currently streaming on HBO Max.