She has her hands full! Peru Two’s Michaella McCollum stocks up on nappies at Tesco during a shopping trip with her five-month-old twin boys

She hit the headlines for her many holidays after being released from prison, but former ‘Peru Two’ drugs mule Michaella McCollum has swapped Spanish beaches for something a little more mundane since becoming a mother.

Michaella, 24, from Belfast, Northern Ireland who gave birth to twins Raphael and Rio in May was spotted on a shopping trip at her local Tesco, with her baby boys in tow.

While many mothers find a trip to the supermarket rather fraught with even one young baby, Michaella looked remarkably unflustered as she pushed her trolley stocked with essentials for the boys including nappies and formula.

She carried one twin strapped to her chest in a sling, while the other remained in his car seat in the trolley. 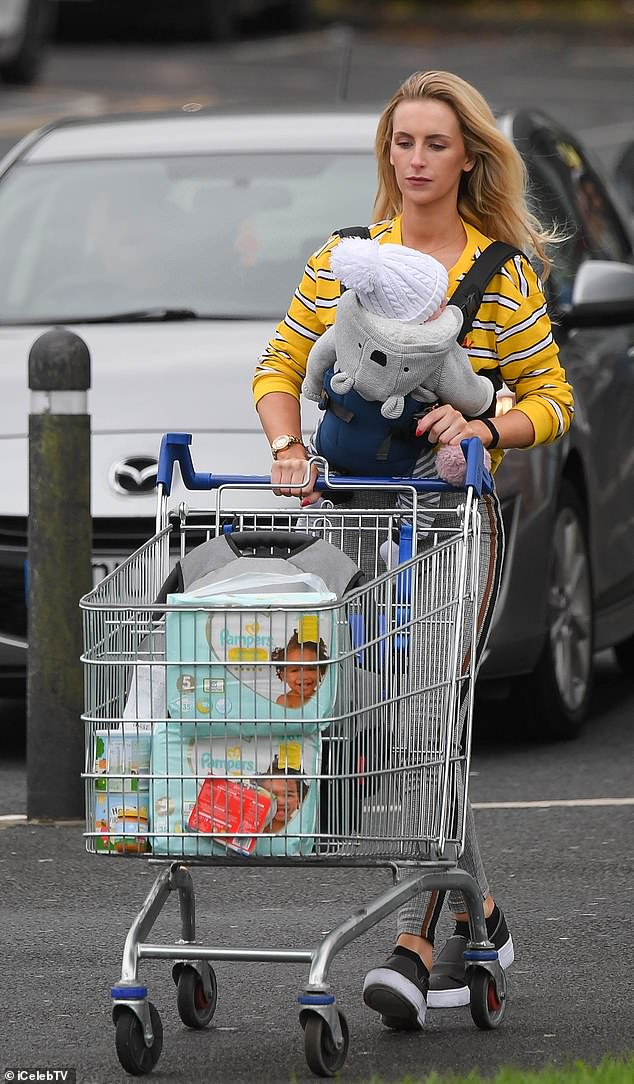 Former ‘Peru Two’ drugs mule Michaella McCollum, 24, from Belfast has been spotted picking up nappies for her twin boys on a shopping trip at her local Tesco 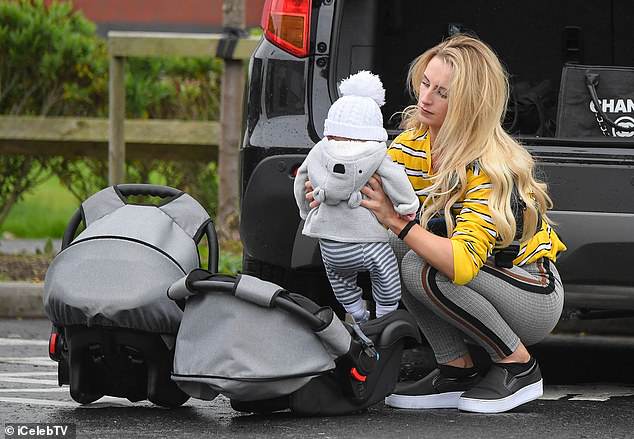 She has her hands full! Following the shopping trip Michaella settled one twin back into his car seat after carrying him around the store in a sling

And the new mother managed to look impossibly glamorous for the outing with her blonde locks tumbling around her shoulders and a full face of make-up.

The former jailbired nailed the smart casual looks in a pair of sporty checked leggings with stripes down the side, teamed with a yellow and white striped top.

Arriving at her car, she took one baby out of his sling and settled him in his car seat before getting both twins back in the car.

Michaella, who shot to notoriety in 2013 when she and her friend Melissa Reid were arrested in Lima for smuggling drugs and dubbed the Peru Two in the press, has never revealed who the father of the twins is. 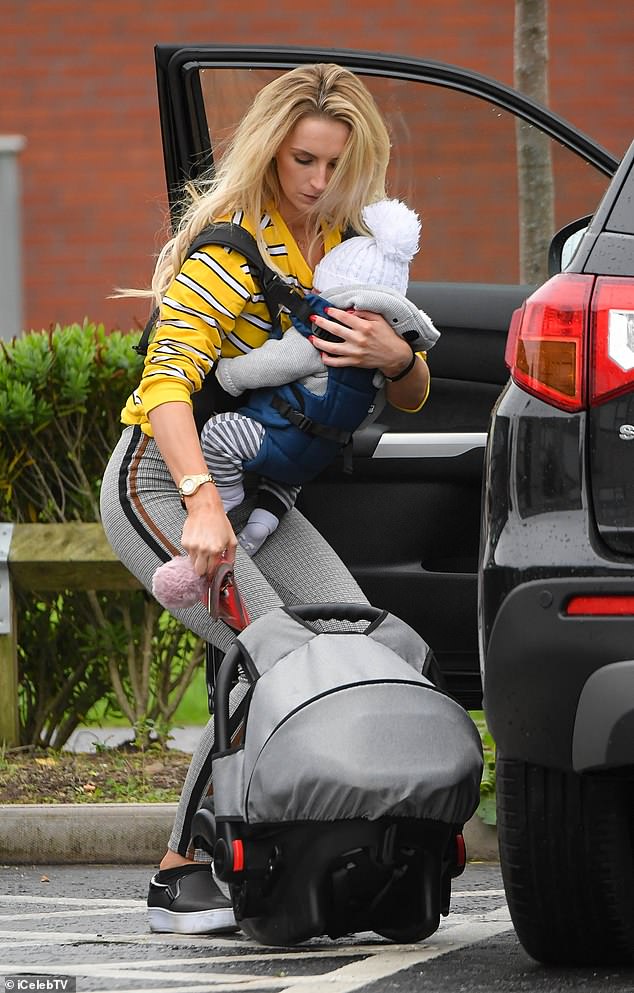 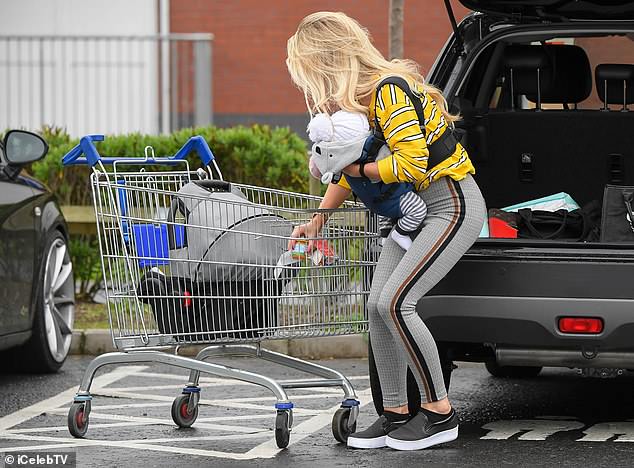 Mum on the go! Michaella unpacked her shopping into the boot of her car while one twin rested in his car seat and she held the other in a sling

The mother-of-two headed out to the shops to stock up essentials for her two boys, including a stash of Pampers nappies 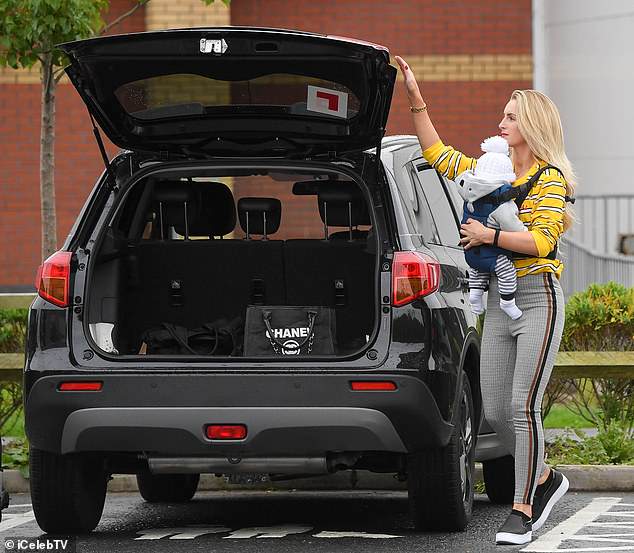 Former jailbird Michaella added a touch of glamour to her outing with a Chanel handbag, spotted in the boot of her car

But she has posted snaps on Instagram with a mystery man – thought to be her boyfriend – omitting his face from the pictures.

Reid and McCollum met in Ibiza in 2013 where they were employed by a drug-dealing gang.

They were sentenced to spend six years and eight months inside a grim jail in Lima, after they were caught at the airport trying to smuggle £1.5M worth of cocaine. 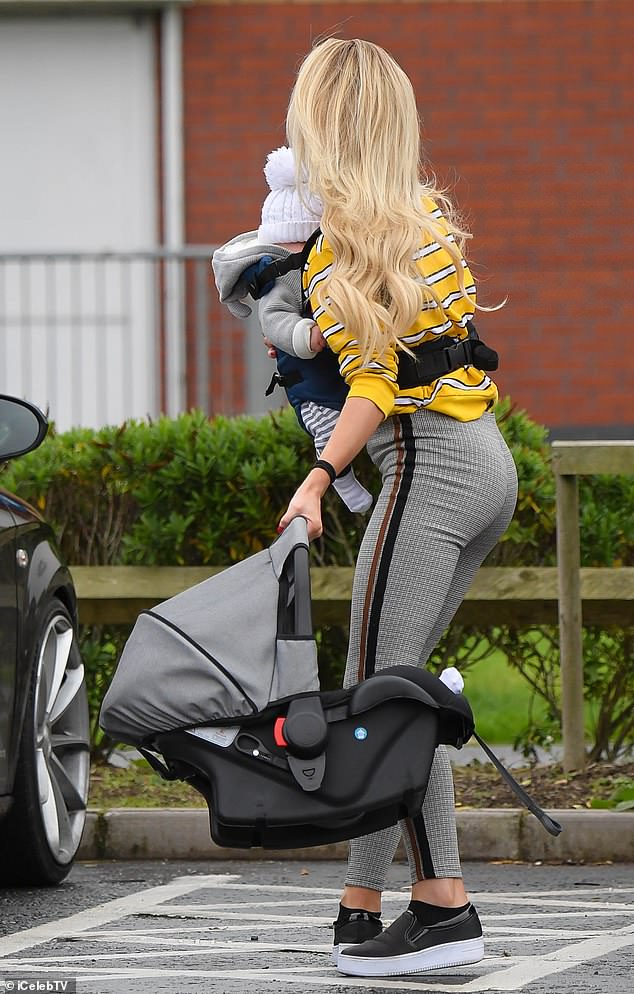 From beaches to babies! Michaella became known for her many holidays after being released from jail in Lima, but these days she is focusing on being a mother to her five-month-old twins 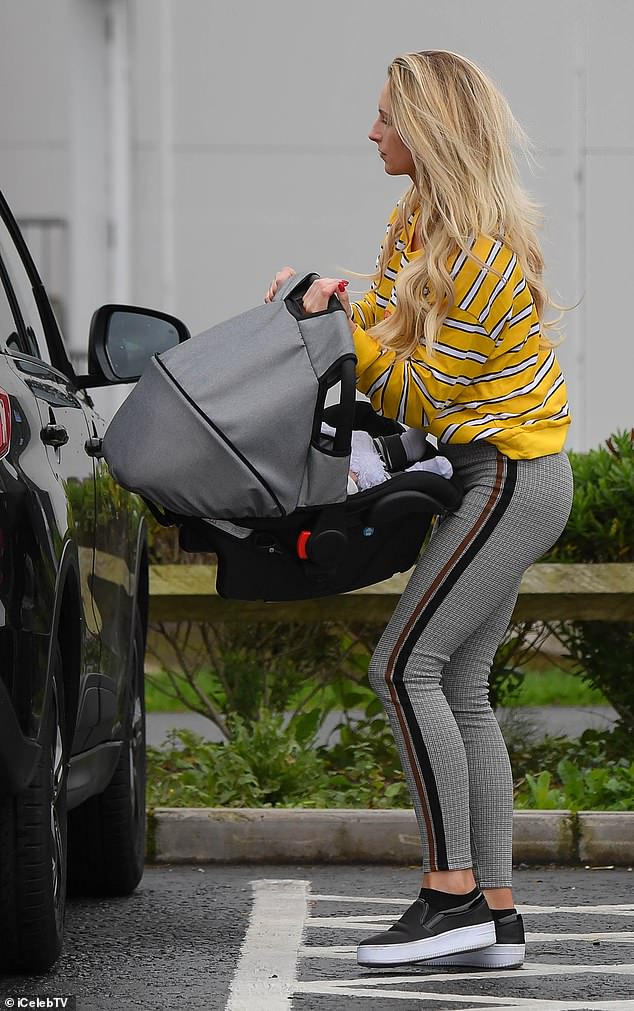 Doting mother! Michaella seems to have taken to motherhood with ease after welcoming her twin boys Rio and Raphael in May this year

However, they were released after serving three years, with Michaella returning to Northern Ireland in June 2016.

Since her release from prison, Michaella has become something of a public figure, attending events and escaping the chilly British weather on a string of sun-kissed holidays last summer.

By contrast her former accomplice Melissa Reid, landed a charity job at Citizens Advice after she was released from jail in South America in June 2016. 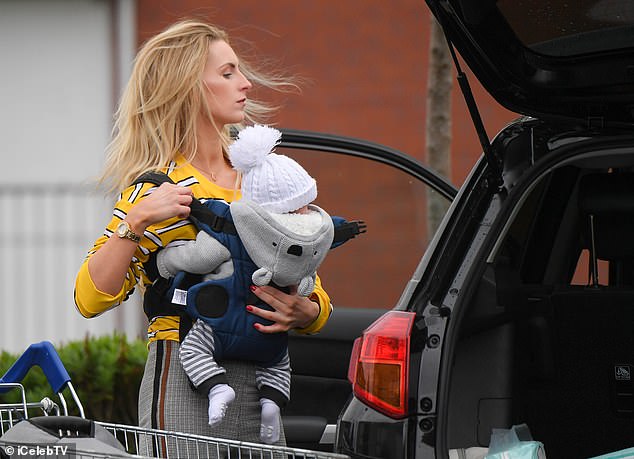 Michaella McCollum spotted at a branch of Tesco in Belfast with her twin boys. She’s never revealed the identity of her children’s father, but hinted at having a mystery boyfriend on Instagram 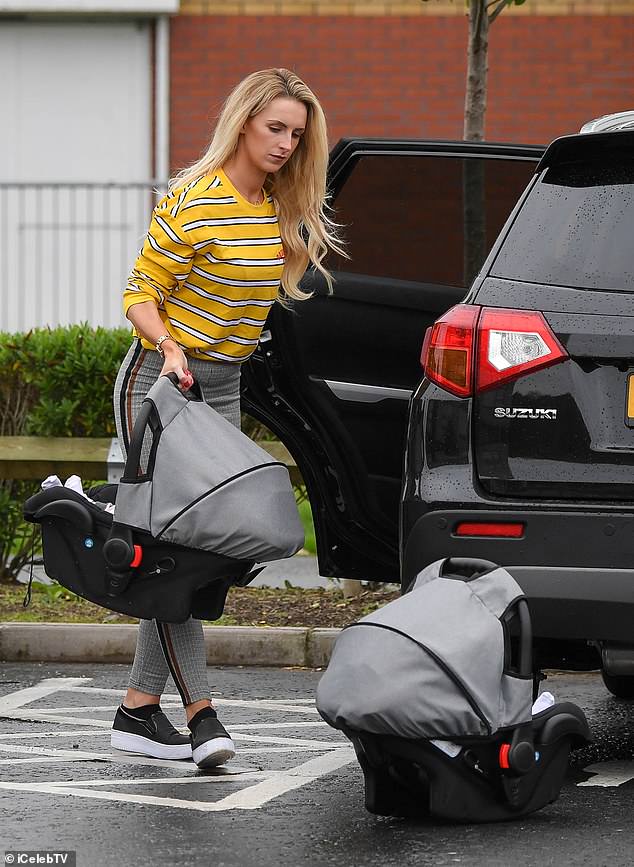 Mum goals! Michaella looked calm and unflustered as she navigated a trip to the supermarket with her two young babies 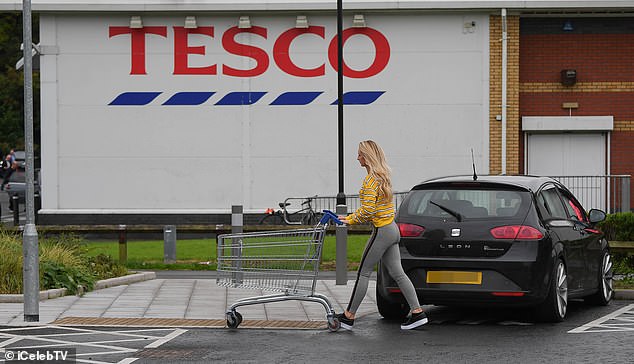 After strapping her boys into the car in their seats and packing the car boot, Michaella returned her empty trolley before heading home 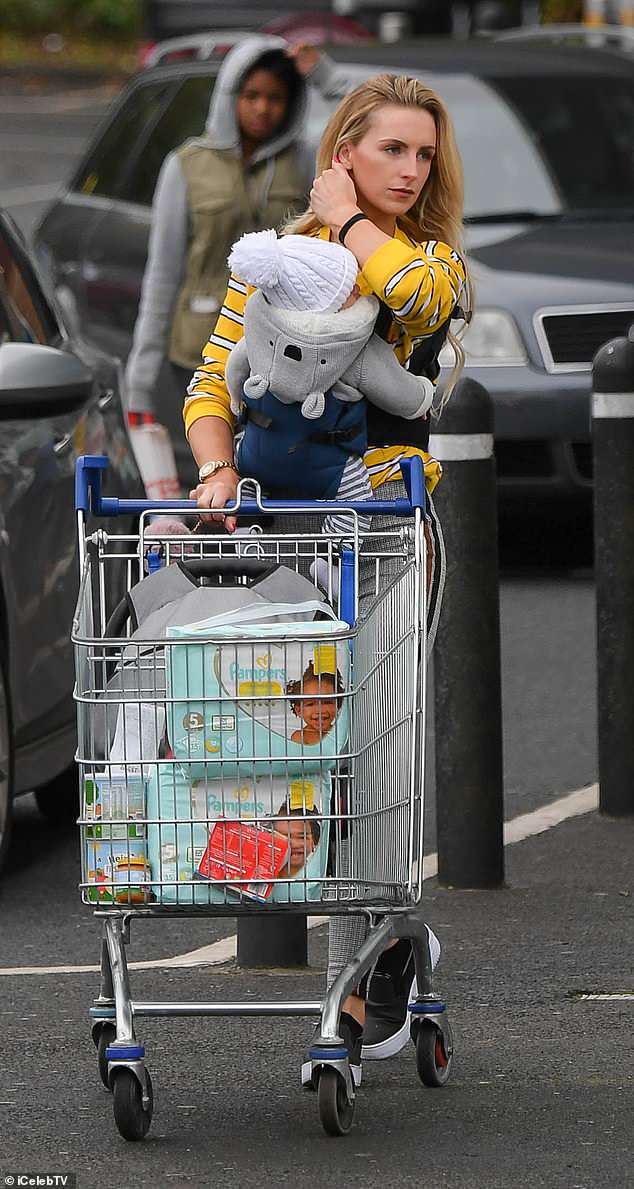 Busy mama! Michaella took the opportunity to pop into Tesco to stock up on essentials for her twin boys who were born in May this year

Michaella was also reportedly offered £250,000 for a tell-all book deal detailing her criminal exploits and time behind bars in Lima, although no details of the publication have been released.

On confirming her pregnancy earlier this year, her agent said: Michaella is looking forward to her journey into motherhood.

‘Couple this with the excitement of her book release and 2018 is set to be an amazing year for Michaella.’

The mother-of-two, recently announced on Instagram that she was hiring employees for an unspecified ‘global’ social media business 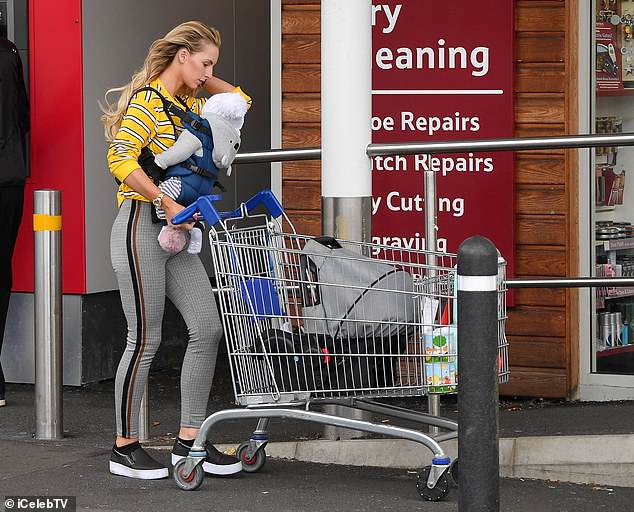 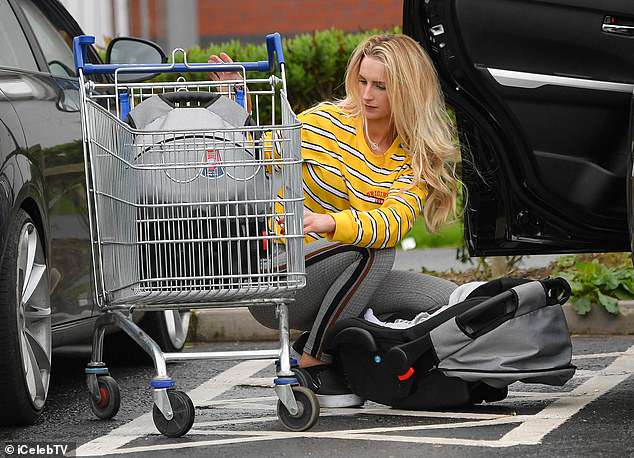 It’s a balancing act! Busy mother Michaella has a lot on her plate with two young babies but seems to be taking to motherhood like a natural 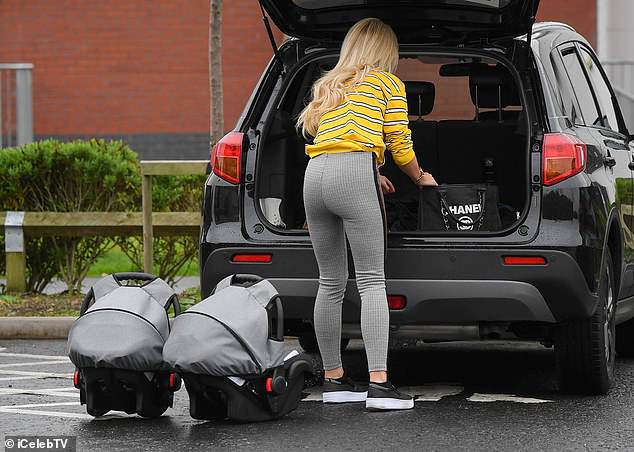 Mum on duty! Michaella took her twins out of the car and then pulled out a baby sling so that she could carry one of them and keep her hands free 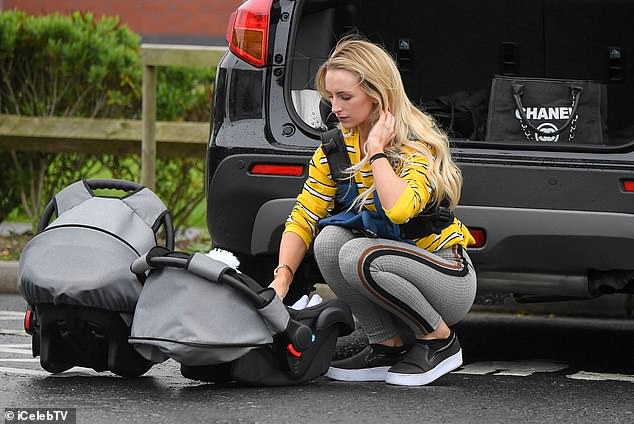 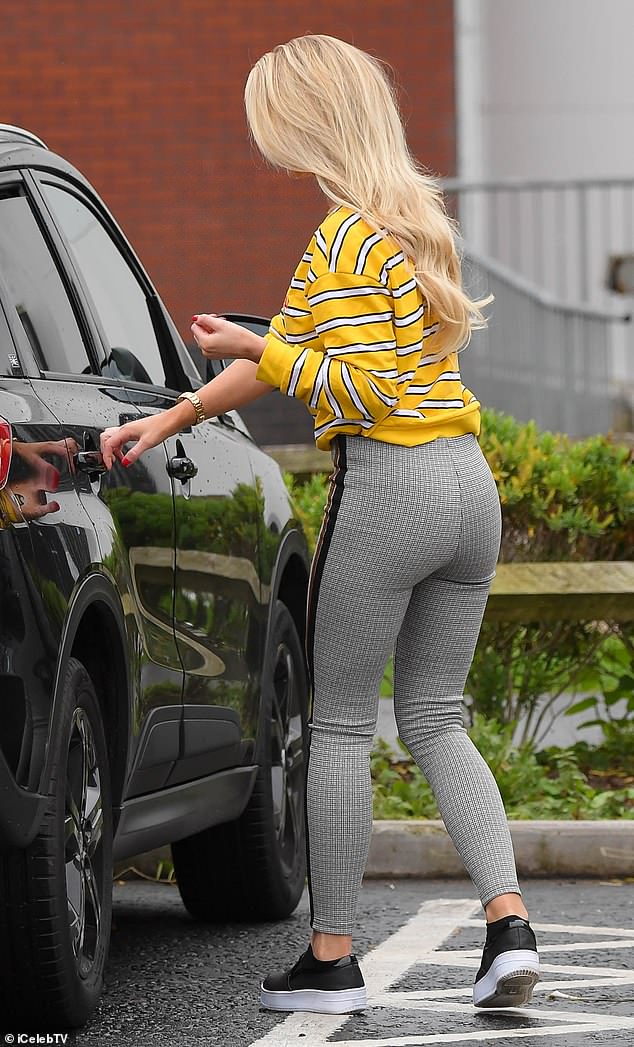 She’s a Yummy Mummy! Michaella showed off her prowess for casual dressing in figure-hugging checked jeggings and a striped top

She advertised the job opportunity through an Instagram story that outlined the benefits of ‘being your own boss’.

McCollum explained: ‘Starting my own business working with social media and award winning products on a global level was the best decision for me and my circumstances.’

The exact nature of the business is not clear but it is thought it might be linked to cosmetics. McCollum has also previously promoted self-tanning products on Instagram 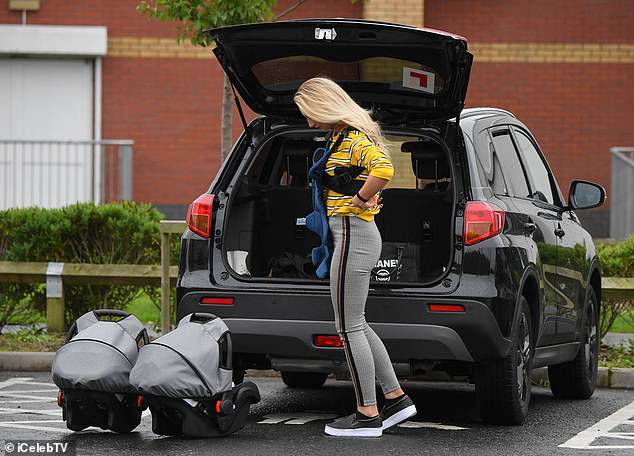 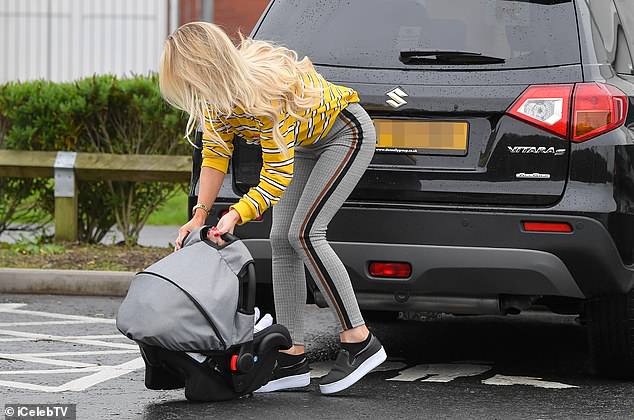 Precious cargo! Michaella certainly has her hands full with two young babies, but seems to be adapting to motherhood with ease