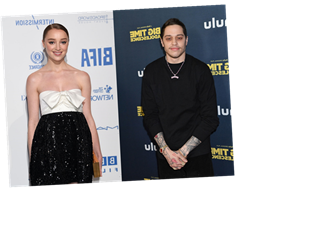 Somebody crack a window open because Pete Davidson and Phoebe Dynevor’s reported long-distance relationship is steaming up. “Pete and Phoebe are still going strong despite not being able to physically spend time together,” a source reportedly told Us Weekly on April 5. “They keep in touch over text and FaceTime. Right now, they’re just focused on work… They’re not looking to rush things.”

ICYMI: Rumors that something was going on between the comedian and the Bridgerton star first started swirling around back in March when Page Six declared the pair was reportedly "spending time" with each other. While no one’s 100 percent on when the two actually first crossed paths, most fans are guessing they probably first met when Dynevor was in New York filming Younger back in February.

Since her time in New York, they’ve apparently been spotted out together in England. “We saw them holding hands and hugging each other,” an eyewitness who claimed to have seen them together in Caverswall, England reportedly told Stoke-on-Trent Live on March 24. The same person reportedly added that "it looked like they were in a relationship and they seemed happy together.”

Now, just a few weeks later, Us Weekly claims the pair is reportedly "officially dating." But they’re apparently not putting too much pressure on the situation. No, according to the reported source, the couple is apparently “seeing where their relationship goes” and “trying to make long distance work.”

That said, things do seem to be going pretty dang well. “They’re happy with each other,” the source reportedly told Us Weekly. “He makes her laugh. Pete is a good guy and definitely a charmer. He’s easy-going and fun to be around.”

So, when are they going to see each other again? Well, according. to the reported source, Davidson may or may not be planning a little visit to see Dynevor for her 26th birthday on April 17. “He’s hoping to visit her for her upcoming birthday,” the source reportedly told Us Weekly.

Making international trips to see each other for your birthdays? If that doesn’t scream officially in a relationship, IDK what does.