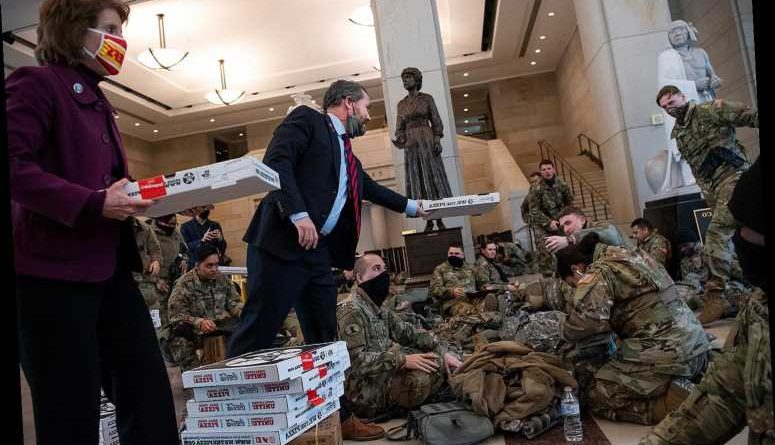 A Washington, D.C., pizza shop is doing its part to support the National Guard members stationed at the Capitol ahead of Wednesday's inauguration.

We the Pizza, which is located on Capitol Hill, delivered 150 pizza pies to the troops on Tuesday after receiving a call from Representatives Michael Waltz and Vicky Hartzler, requesting the pies, Today reported.

Since that day, the company has delivered approximately 700 pies to troops at the Capitol Visitor Center, with an additional 300 expected to be delivered each day until President-elect Joe Biden's inauguration, according to the outlet.

We the Pizza also set up a form online where people can donate a pie to the National Guard for $12.

For each pie that is donated, We the Pizza intends on matching it, according to Micheline Mendelsohn, the deputy CEO of the company that owns We the Pizza.

"We wanted to help, so we matched (the order)," Mendelsohn told Today. "Then we realized we weren't even sending nearly enough so we just started donating to troops." In a post on their Instagram, We the Pizza added: "We are so proud to support our troops! Thank you to Representatives @michaelgwaltz and @rephartzler who made the first move! We are so honored to serve the National Guard doing the important work of keeping our Capitol safe."

We the Pizza isn't the only local business to show their support for the service members in the days before Biden's inauguration. Chef José Andrés delivered a late-night dinner to those who were enforcing the curfew on the streets of Washington, D.C., on Jan. 6, following the riots at the U.S. Capitol earlier that day.

Andrés, 51, shared a video to his Twitter feed, in which he said that he and his daughter Ines were "picking up pizzas and delivering them" to the National Guard and police, who were "making sure everything is safe downtown" in Washington, D.C.

Mendelsohn told Today that a number of other businesses have also recently gotten involved with the efforts, including Buffalo and Bergen, CHIKO, The Duck & The Peach, Maketto, Ris, Pizzeria Paradiso and District Doughnuts.

"We'll be providing breakfast, lunch and dinner to the troops through next week so they have a variety," she told the outlet.

"Because we're all a community that COVID and now these violent protests have hit hard," Mendelsohn added. "I mean, the whole city. Really. It's bananas." The National Guard has been stationed outside the Capitol since Jan. 6 after thousands of President Donald Trump's supporters gathered outside in D.C. and forced their way into the building.

Motivated by the president, the rioters stormed the Capitol and were photographed scaling walls, breaking windows, roaming through the building, looting and vandalizing, including in congressional chambers and lawmaker offices. Rioters also ripped an American flag off of a flagpole outside the Capitol building and replaced it with a Trump flag.

The Army mobilized all 1,100 members of the District of Columbia National Guard before they were deployed to the Capitol and other surrounding parts of D.C., The New York Times reported.

In addition to the D.C. National Guard, members of the Maryland and Virginia Guard were also mobilized, as well as Virginia State police, who arrived earlier in the day.

Trump later declared a state of emergency in D.C. with federal assistance ordered through Jan. 24 as authorities prepare for marches and more potential violence when Biden is sworn in, PEOPLE previously reported.