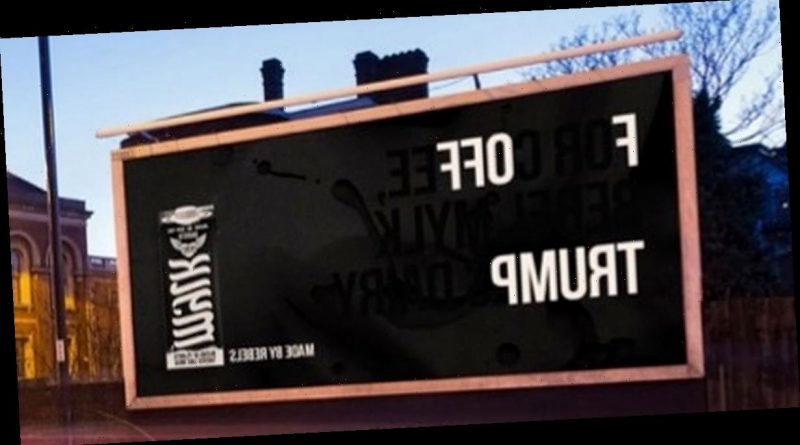 A plant-based company has mocked Donald Trump, telling him to 'F Off' in their latest billboard ads.

Rebel Kitchen, which makes a number of dairy-free milk alternative products, has released a number of billboards and outdoor ads targeting Trump.

One of its more subtle ad reads: "For coffee, Rebel Mylk Trumps dairy."

While another simply says "F Off Trump."

A third ad initially reads "Nothing trumps a nice glass of milk", but it soon fades to reveal the sentence “Trump’s an a**”.

Tweeting on the latter ad to its 11,300 followers, the company joked about Trump recently being banned from the social media site.

The caption jibed: "[email protected] *really* wouldn't like our new ads… luckily he's never going to see them on here."

The adverts have been launched to promote Rebel Mylk’s Organic Barista Mylk, which was launched as part of its Veganuary campaign.

They are set to appear across the UK throughout January, in partnership with Clear Channel.

"From our no-compromise Mylk recipe to our consumer messaging, we never settle. We are rebels with a cause, so we take risks and never shy away from telling it like it is."

The new campaign follows on from the brand's summer campaign, in which a normal phrase was obscured to read "jog on milk".

Rebel Mylk offers a range of dairy-free milk alternatives, including skimmed, whole and extra creamy, as well as a coconut water product.

It also offers a range of dairy free milkshakes, which come in chocolate, chocolate hazelnut, iced coffee and mocha flavours.