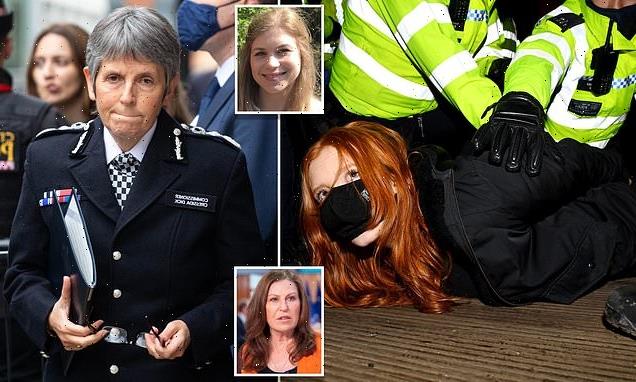 The one question on every woman’s lips over breakfast, once details were released of poor Sarah Everard’s abduction by a serving Met police officer, was simple: Can we ever trust a cop again?

What do we now tell our friends and daughters to do if confronted by an officer of the law while walking home on a well-lit suburban street?

Heartbreakingly, she must have accepted the policeman’s reprimands for supposedly breaking Covid laws and even allowed him to handcuff her. Just as any one of us would have done, she believed he was there to protect her. 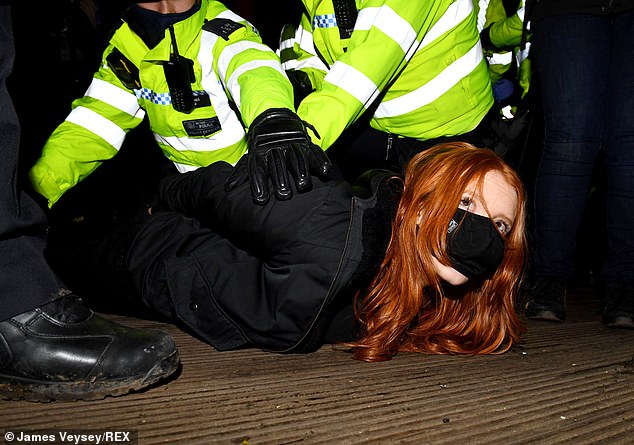 What do we now tell our friends to do if confronted by an officer of the law while walking home on a well-lit suburban street? Pictured: Patsy Stevenson is arrested at Sarah Everard’s vigil 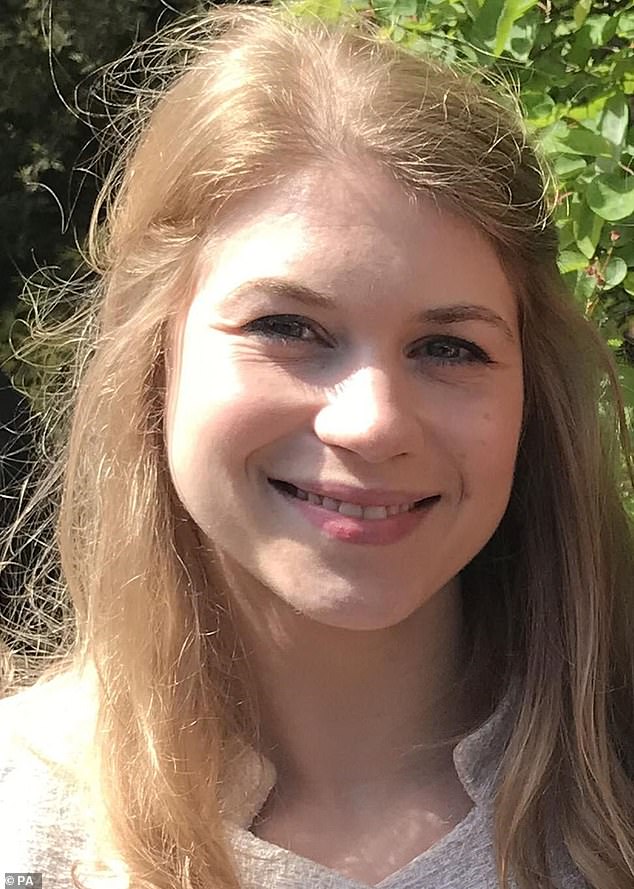 Heartbreakingly, Sarah Everard (pictured) must have accepted the policeman’s reprimands for supposedly breaking Covid laws and even allowed him to handcuff her

All that has changed. Even Met chief Cressida Dick says so in a mealy-mouthed sort of way. ‘I recognise that for some people a precious bond of trust has been damaged,’ she said.

For some people? Damaged? That bond of trust has been shattered in women everywhere, including me, after seeing the haunting images of a handcuffed Sarah in that car on the unimaginably terrifying journey to her death.

If a lone policeman tried to arrest me on the street now, I would run away, I would scream, do everything I could to resist and appeal to anyone nearby to help me.

Would I allow a lone policeman into my home as I did a few years ago to investigate two attempted break-ins?

Not without a sturdy male neighbour by my side. The police face an almost insurmountable problem in trying to regain that trust.

Scotland Yard issued new advice that if women feel frightened when approached by a single male officer, they should dial 999, or shout out to a passer-by or flag down a bus. 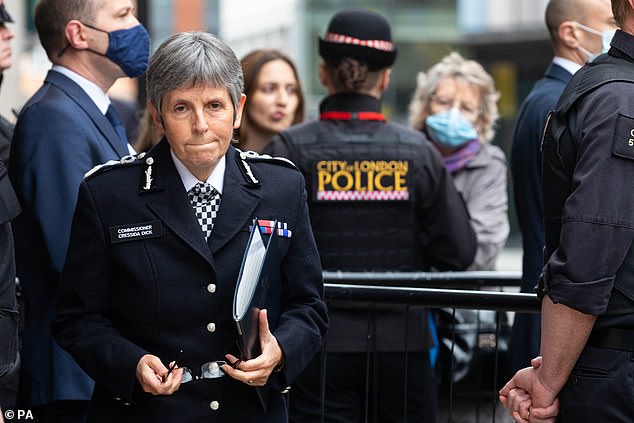 Just as any one of us would have done, she believed he was there to protect her. All that has changed. Even Met chief Cressida Dick (pictured) says so in a mealy-mouthed sort of way 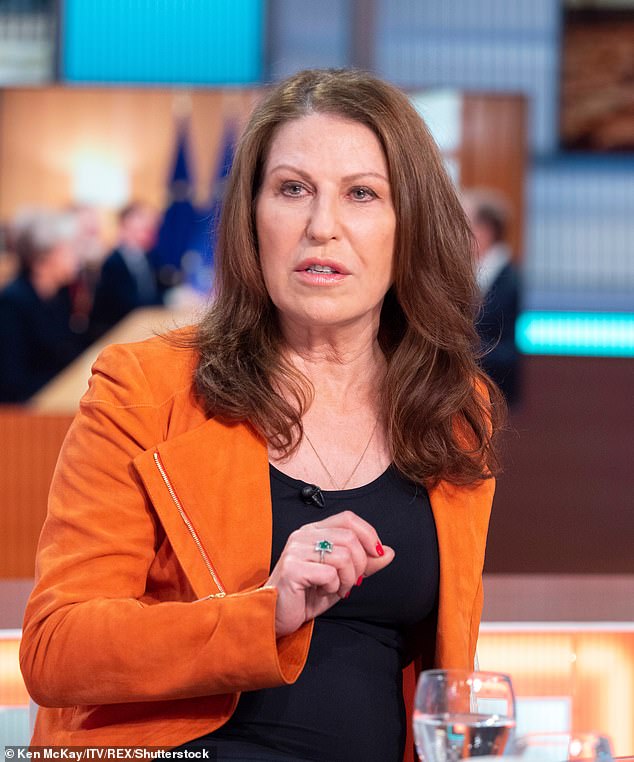 That bond of trust has been shattered in women everywhere, including me, after seeing the haunting images of a handcuffed Sarah. Pictured: Amanda Platell

But it’s the police who need to change, not us women.

Only yesterday, there were reports that Sarah’s murderer was one of five officers who regularly exchanged misogynist, homophobic and racist material on a WhatsApp group.

He was nicknamed ‘the rapist’ by colleagues and had exposed himself on three occasions prior to Sarah’s murder.

This doesn’t sound like a few bad apples as the hapless Cressida Dick suggests, it seems to have permeated the Met’s culture.

For while the vast majority of officers are, of course, brave men and women dedicated to helping the community, it is unforgivable that Sarah’s killer’s actions were not investigated further by the police.

And that brings us back to the same question: Can we ever trust a cop again?

ARLENE WILL BE THE QUEEN OF THE JUNGLE

The dancer and West End choreographer Arlene Phillips, 78, is to become the oldest ever contestant in I’m A Celebrity — and she’s the reason I’ll watch the show.

Unlike previous oldie contestants Stanley Johnson and Harry Redknapp, Arlene looks half her age, has the body of a dancer and can be quite fierce.

I’m still recovering from the time she came round for dinner, tried to teach me to dance and despairingly declared: ‘Stick to writing.’

The private jet that carried Megs and Harry back from New York to LA produced an estimated 17 tons of carbon on the trip, more than the average UK resident in a year.

Perhaps the daffy Duchess thought her carbon footprint was less because she was wearing $655 size-six Manolo Blahnik stilettos.

We regularly make fun of Gwyneth Paltrow’s obsession with her Goop ‘wellness’ vagina-scented candles and her $15,000 vibrators, but crikey, she looks sensational naked in the bath in that Instagram shot celebrating her 49th birthday.

She amicably divorced Chris Martin, they co-parent their two kids, she’s happily remarried and has made a fortune out of Goop.

Maybe there is some magic in Gwynnie’s Yoni lady-part eggs after all.

I was surprised there was no sign of Daniel Craig’s wife Rachel Weisz at the Bond premiere. At the 2015 event for Spectre, he and Rachel couldn’t take their hands off each other.

Beautiful Lea Seydoux, who plays Craig’s lover in No Time To Die, said they couldn’t stop crying and hugging when filming their last scene.

‘They [the characters] are in love,’ she said. If I were Rachel, I’d be a bit shaken — and stirred to reclaim my husband.

It’s not only stars who have fallen for the promised power of the Hamsa amulet, believed to grant protection from life’s travails.

One of the loves of my life gave me a beautiful ruby-and-diamond Hamsa which I wore in the belief of our eternal togetherness… before he dumped me for a blonde half my age.

After 13 years, Britney Spears is finally free from the Svengali-like control of her father Jamie.

He’s to relinquish the role as her ‘conservator’, which gave him legal control of her earnings, her contraception and even allowed him to monitor conversations with her boyfriend and her children.

She says he should be in jail. He says he ‘loves his daughter unconditionally’ and will continue to look after her interests.

And no doubt seek to protect his alleged five per cent share of her multimillion-dollar fortune.

KNEESY DOES IT FOR KNOBBLY KATE

It’s a brave celebrity who is snapped walking next to her daughter as Kate Moss, 47, did beside Lila, 19, at Milan Fashion Week. 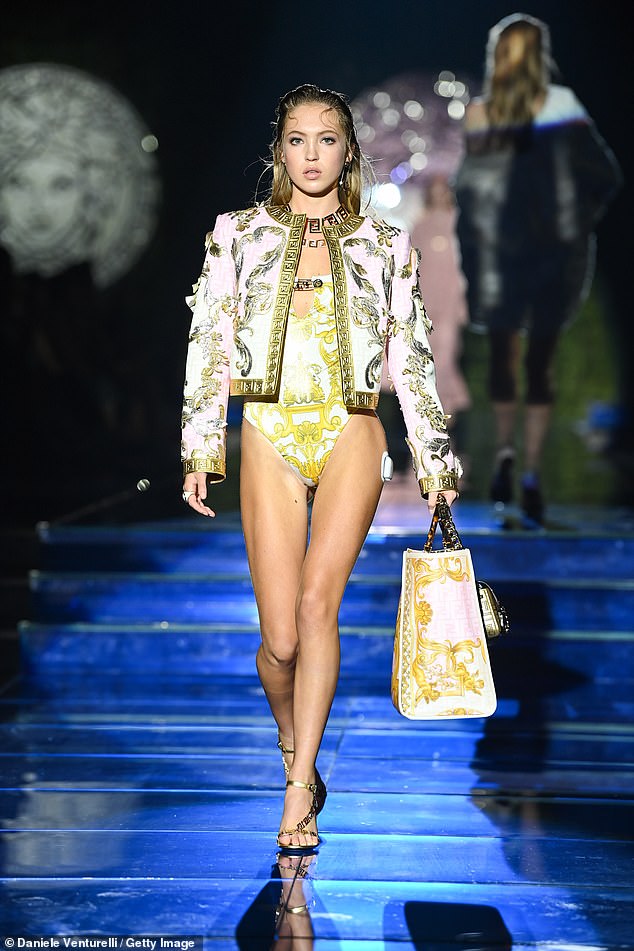 It’s a brave celebrity who is snapped walking next to her daughter as Kate Moss, 47, did beside Lila (pictured), 19, at Milan Fashion Week 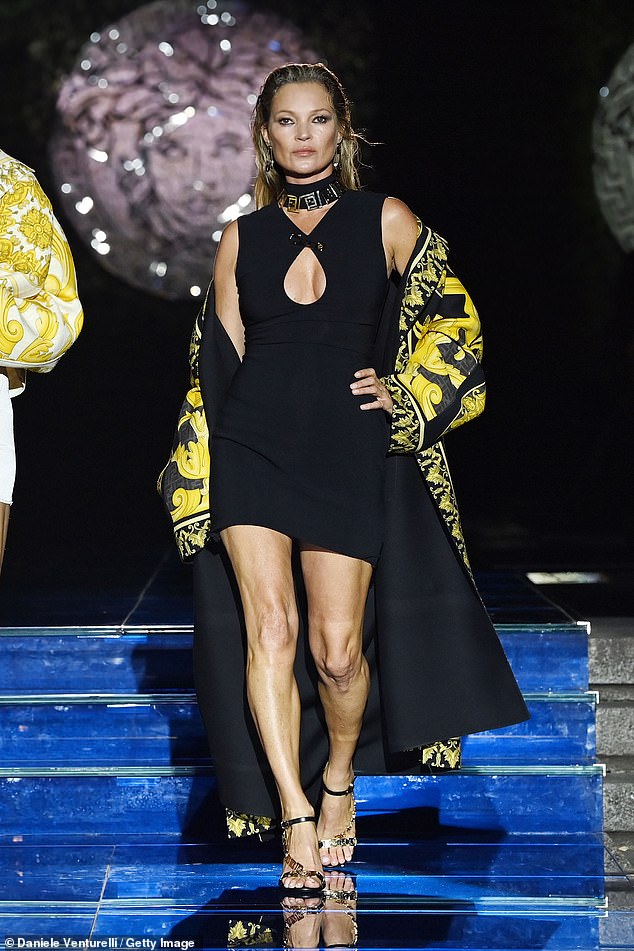 Lila inherited mum’s perfect pins, but must be hoping she doesn’t get landed with the knobbly knees that no amount of surgery can conceal.

All power to you Kate for proving that even supermodels are not immune to the gentle ravages of time.

As former French president Nicolas Sarkozy is sentenced to a year in prison for fiddling his campaign finances, before being told he can serve his time under house arrest in his Paris mansion, his supermodel wife Carla Bruni is strutting her stuff on the catwalk in Paris Fashion Week, then going home to hubby.

What kind of punishment is that, having to spend a year locked up with Carla?

Incredible that the new series of Strictly got the lowest viewing figures in five years — down to 7.3 million — especially when they have our first-ever all-male duo in Bake Off’s John Whaite and dancer Johannes Radebe.

Their tango was simply magnificently masculine!

The murder of teacher Sabina Nessa reignited the debate about how we keep women safe on our streets.

Yet the friend who organised last Friday’s vigil, Annie Gibbs, urged everyone to concentrate on remembering Sabina, not politics.

‘We need to focus on the fact there is a family who have lost someone. All this political stuff and organisations capitalising on it is just not needed right now and it is wrong,’ Annie said. She has a point.