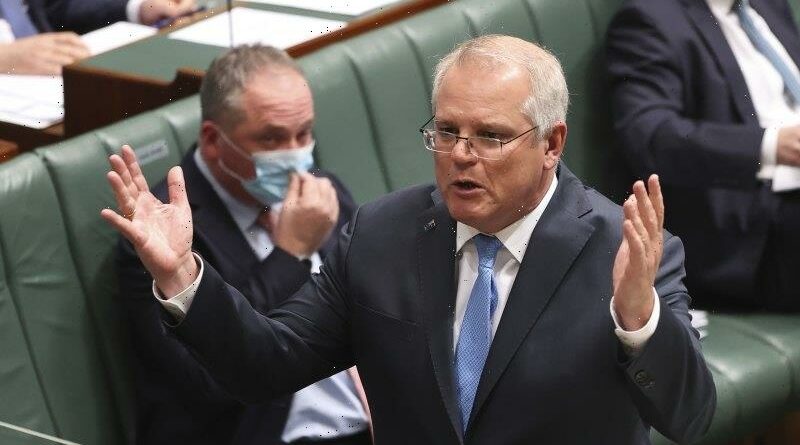 Nationals MPs are being told a federal plan to slash carbon emissions to net zero levels by 2050 will deliver a “great positive” for the economy despite new modelling that shows a hit to coal prices from global action on climate change.

The new message aims to end a damaging policy split that could last into next week as key Nationals insist on more time to put their demands to Prime Minister Scott Morrison on regional jobs, dragging out a deal. 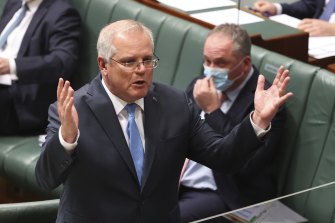 Nationals leader Barnaby Joyce confirmed the concern about falling prices for coal exports while saying he backed the case for a new coal-fired power station in Queensland as part of the federal energy policy.

The division will delay a federal cabinet decision while parading the government’s division before Mr Morrison departs late next week to a G20 summit in Rome and United Nations climate talks in Glasgow where he will be asked to pledge deeper emission cuts.

In a promise to voters ahead of the next election, Mr Morrison told Parliament the climate plan being developed would show a great benefit to the country because it had the right balance without putting a price or tax on carbon.

“If you have the right plan it is a positive impact,” he said.

Challenged by Labor on the modelling for the plan, Mr Morrison said the goal was to put a transition in place to affordable and reliable energy rather than rush the change.

“If you have a credible plan, with the proper transparency Australia is well known for, then it can be a great positive for Australia,” he said.

The government has not revealed its plan, its modelling, its emission forecasts or its spending measures while it waits for the Nationals to decide their stance, but Mr Morrison tried to assure nervous MPs the outcome would protect regional jobs.

The Prime Minister argued that Australia’s emissions had fallen more than 20 per cent since 2005 at the same time manufacturing jobs had increased, gas exports had grown, the resources sector had expanded and investment had surged into renewable energy.

As protesters outside Parliament House called for faster action on global warming, Labor leader Anthony Albanese accused Mr Morrison of being too slow to admit the need for bigger cuts to emissions and the net zero target by 2050. 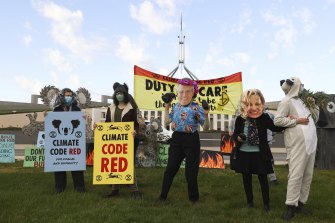 Mr Albanese told the Labor caucus the government’s climate debate was a “colossal failure” because Mr Morrison was leaving it to the Nationals to decide the policy and abrogating his responsibility as Prime Minister.

While Labor is calling on the government to legislate the net zero target for 2050, Mr Albanese and his shadow cabinet are yet to decide on a 2030 target amid a division over whether to make climate change a major point of differentiation at the election.

The political debate revived the clash from the last election when Labor promised a 45 per cent cut by 2030, the target urged by the UN, while Mr Morrison accused former Labor leader Bill Shorten of wanting to “end the weekend” because he set a goal to encourage electric vehicles.

Setting the timetable for a decision on net zero, Mr Joyce suggested Nationals MPs would come to him with their concerns by the end of this week and he could put these to Mr Morrison and others in the government in the hope of responses in the subsequent days.

This is likely to take the decision into the weekend and early next week with meetings of the Nationals, the Liberals, the full Coalition party room and a federal cabinet meeting to decide the climate targets.

Mr Joyce told Parliament the modelling he had seen showed a “downturn” in coal prices but he told reporters later that he treated these as estimates only, given it was hard to forecast four years ahead, let alone out to 2050.

Mr Joyce said he supported coal-fired power stations including one at Collinsville in Queensland, a flashpoint in the climate debate because the Greens and Labor oppose the use of taxpayer funds to help the project.

Only two opponents of net zero spoke up in the Coalition party room meeting on Tuesday, with Queensland Nationals senator Matt Canavan and Queensland Liberal senator Gerard Rennick both warning of the cost of the change.

Some Liberals took that as a sign that the net zero policy was “safe” because most in the party room – 21 Nationals and 90 Liberals – appeared to accept it would go ahead.

But one government MP, Garth Hamilton, a former mining engineer who holds the electorate of Groom around Toowoomba in Queensland, told the Liberal party room he wanted more detail on the impact of a net zero pledge on industries like mining and meat processing.

Mr Hamilton told the meeting that businesses in his seat were worried about the implications after seeing smaller mines in the area close down over the years.