Some of Scott Morrison’s colleagues were not sure about all his messages this week when the Prime Minister suggested the government had stumbled out of the political sunshine and found itself on a hard, muddy track, in the rain.

Morrison was frank about the pressure on the government when he spoke to Coalition MPs on Tuesday morning and there was an edge to his warning about how things can go bad very quickly. 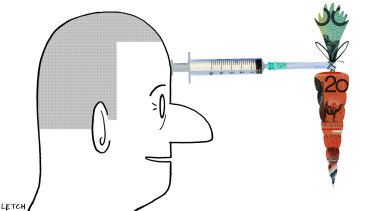 This was not the first time Morrison had to remind MPs to stick together – let’s face it, no Liberal leader can send out that reminder too often after the bloodletting of the past decade – but there was an edge to his warning about the government’s challenges.

Morrison’s words were not totally clear to some of his MPs. With everyone on alert about the Sydney outbreak, the party room meeting was moved to the Great Hall of Parliament House to put more space between everyone in the room. Dozens of MPs logged on from homes and offices to watch the meeting online, although it kept cutting out.

There was one simple message from the Prime Minister, according to a spokesman. He reminded the party room it had backed him not only in the sunshine but in the “heavy weather on the hard, muddy track” of running the country. At one point he almost made it a question of faith: you asked me to lead, I asked you to follow.

Morrison told MPs they had honoured that agreement over the past three years. He is a few weeks shy of his third anniversary, actually, but he is about to overtake Julia Gillard for his time in office. She held power for three years and three days. Morrison reaches that milestone on August 27. (He has already overtaken Kevin Rudd, Tony Abbott and Malcolm Turnbull.)

Do not expect any public celebration. Morrison knows he is scrambling to win back voters – and his ministers and backbenchers know it, too.

The latest COVID wave has changed everything. It exposes the emptiness of all the assurances from Morrison and his ministers about their progress in beating the pandemic.

In its dreams, the government wanted Parliament to resume this week with vaccinations rising, COVID-19 case numbers falling, the country opening and the economy rebounding. Instead, Parliament House looks like it did in the first wave. Most of the staff are working from home, many of the MPs are staying away, everyone is wearing a mask and the public is barred from entry. Like so much of the country, it has lurched back to early last year.

So much for progress. While NSW Premier Gladys Berejiklian is responsible for the gaps in her state’s defences, Morrison has to carry the can for the shortage of Pfizer vaccines, although he often slips into making things sound better than they are.

“One in five Australians now are double-dose vaccinated,” he told Parliament on Tuesday. Not yet. The rate that day was 15.7 per cent, compared with 55 per cent in Canada. Morrison forgot to say he was referring to the “eligible population” aged 16 and over.

For all the modelling and forecasting, the problem remains vaccine supply. There are just not enough Pfizer doses in state hubs, hospitals or GP clinics. Can Morrison bring forward more shipments from Pfizer or start Moderna imports earlier? “Wherever that’s possible, we’ll be seeking to achieve it,” he said on Thursday. The answer is to take him on trust.

Some Coalition MPs with long experience think voters will come back to Morrison over time. Governing is hard, they say. Even harder in a pandemic. One says wavering voters are likely to return to the safety of Morrison at the election.

Coalition MPs are filthy with the health officials who undermined confidence in the AstraZeneca vaccine. One Liberal, Andrew Laming, let rip during Tuesday’s meeting at the Australian Technical Advisory Group on Immunisation for giving flawed advice that failed to take into account the clear risk of another outbreak. That drew support from many in the room who want ATAGI questioned more closely.

Anthony Albanese, meanwhile, is getting bolder. The Labor leader picked a big fight with his proposal for a $300 payment for those who get fully vaccinated by December 1. Given four million people have already done so, that means spending $1.2 billion on people who did not need the incentive. Many others will not need it, either.

The Labor caucus is restless over the idea. Albanese announced it without seeking approval from caucus or the full shadow cabinet, although he took it to the expenditure review committee of the frontbench team. Labor treasury spokesman Jim Chalmers put it to the group.

It is an unconventional move, at least according to some cabinet ministers. Rather than keep the focus on Morrison this week, they say, Albanese has made himself the story. Yet there is logic in the tactical play. One of Albanese’s biggest challenges is that many people do not know he is there. Now he has a simple policy that gets people talking.

Economists like the idea of financial incentives to get hesitant Australians over the line on vaccines because the spending can cost less than a prolonged lockdown. Studies show cash works. Many of the critics, meanwhile, are on comfortable salaries and may not be able to tell whether $300 will make a difference to the final cohort in the vaccine rollout – such as the young men who think they are indestructible.

The question is whether the lure has to be $300 each for up to 20 million adults. Albanese has left himself open to the charge that he would “splash” public funds too easily, even if the $6 billion is a fraction of the $300 billion in federal spending on the pandemic response so far.

Morrison sneers at the Labor idea and talks up other options. He is open to using a lottery, or gift vouchers perhaps, and he has talked about vaccine passports, but he rejects the use of hard cash. On this, Albanese at least has a concrete proposal. Morrison is still searching for one.

And the incentives only work if more vaccines arrive. Only then can Morrison hope to get out of the mud and see a glimmer of sunshine.