The wild child who’s turned her life upside down: How pole-dancing, God and a millionaire fourth husband have saved Emma Ridley 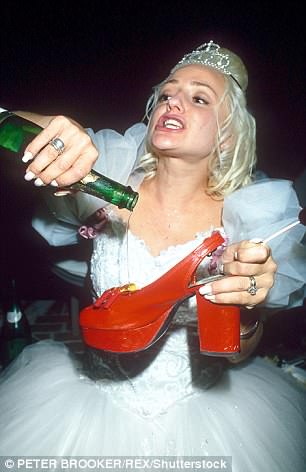 Emma Ridley during one of her wild nights out. She succumbed to her rebellious nature after her parents divorced when she was 11

The manicured grounds of Emma Ridley’s £3.5 million Tuscan-style villa are the very image of Californian serenity.

There is a sparkling pool with splashing fountains, swaying palms and walkways lined with her favourite pink English roses.

Inside the sprawling seven-bedroom house, shared with her 60-year-old millionaire fiance Michael Carter, is a private bar, a huge kitchen containing her collection of Royal commemorative mugs, and even a special ‘fur baby’ room for the couple’s eight dogs.

But walk through the bar – complete with giant fish tank and crystal chandeliers – and you enter a room that pays tribute to a different side of the soon-to-be Mrs Carter – a ‘wild child’ past from the 1980s, when she was a tabloid staple alongside fellow party girls Tamara Beckwith and Amanda de Cadenet.

This bright pink space is dominated by three stainless steel ‘stripper poles’. Rather incongruously there is a large painting of Jesus in one corner. 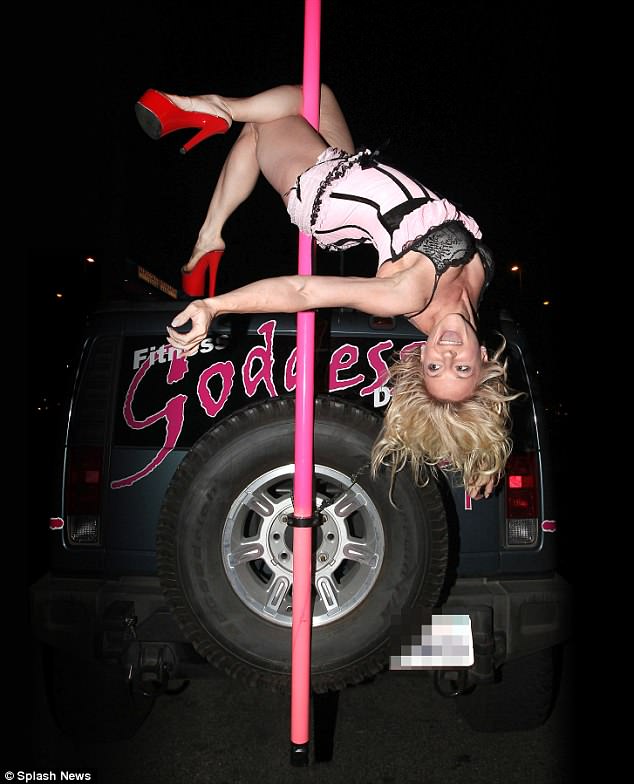 Referring to her poles – and what they’re best known for – she says: ‘I don’t call it stripping, it was always ballet on a pole to me.

‘My life has been one wild rollercoaster ride, but finally I’ve found peace.’

After decades of drugs, debauchery and three failed marriages, Emma today is far from the pouting teenager who cultivated a dubious reputation dancing on nightclub tables, running off to Las Vegas at 15 to marry a man twice her age before eventually ‘crashing and burning’ in Hollywood.

In person she is bright and bubbly and proudly pats her ‘mum tum’ (she had three children out of wedlock along the way), saying: ‘I told my fiance he could either have a bad-tempered skinny girl who works out three times a day and lives on protein shakes or have me pleasantly fluffy and plump. He chose the latter.’

She cheerfully admits her story is a salutary lesson on the perils of fame.

‘Celebrity ate me up and spat me out,’ she says. ‘There were more low points than you can imagine.

‘I see kids today obsessing about fame and wonder if they truly understand the price you pay to live in such a vacuous world where everything is fake, from the friends who pretend to like you to the fake smile you plaster on every time you go out.’ 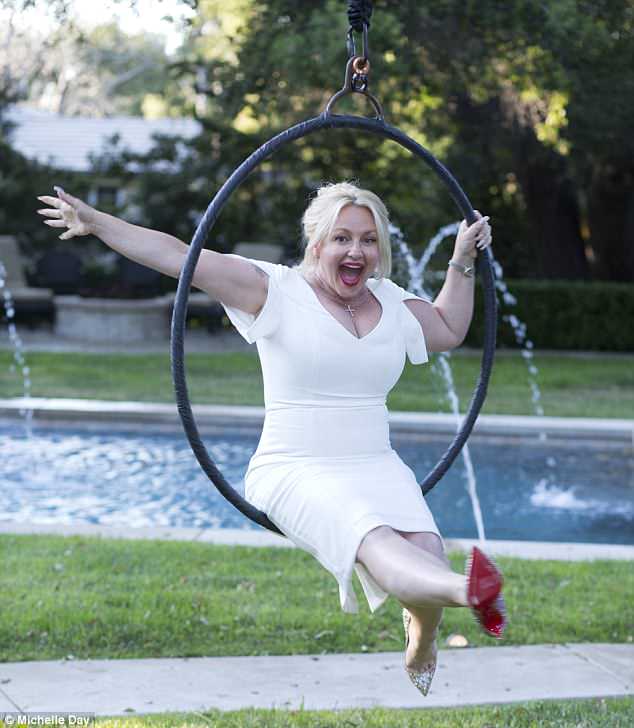 Emma Ridley, pictured at her £3.5 million Tuscan-style villa, has now put her wild child days behind her 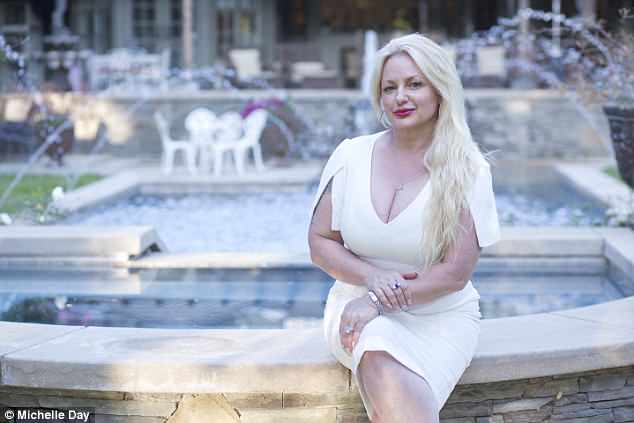 Emma sits beside a water fountain in front of her luxurious villa, which she shares with her rich new husband

Born in middle-class suburbia in Hampstead, North London, her father Victor was a businessman married to Angela, a typical ‘stage mother’ whose own dreams of stardom fell by the wayside when her mother forced her to give up dreams of being an actress and become a hairdresser.

Angela pushed Emma into the spotlight from the age of eight months as a model for Gerber baby food and Pears soap.

Aged six she won a scholarship to the Royal Ballet School, where she was a contemporary of former principal ballerina turned Strictly judge Darcey Bussell.

Emma charmed the nation in 1978 when, aged six, she performed All That Jazz on the Morecambe And Wise Christmas Special.

The following year she appeared in a film adaptation of Jackie Collins’s bestseller The World Is Full Of Married Men.

Six years later she starred as Princess Ozma in the hit Disney film Return To Oz.

But her rebellious nature took over after her parents divorced when she was 11.

She smoked marijuana for the first time; at 13 she lost her virginity and started going to nightclubs. 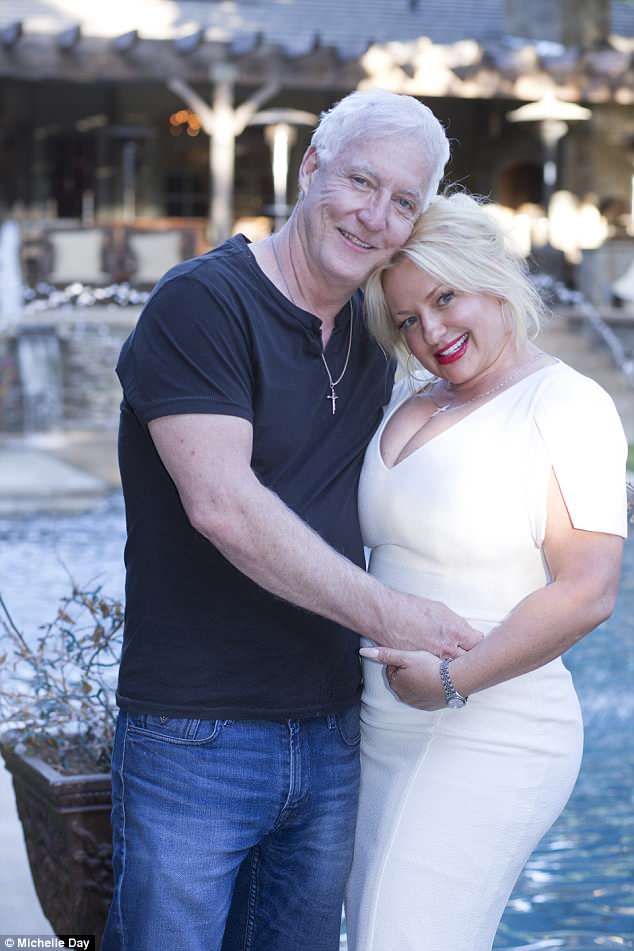 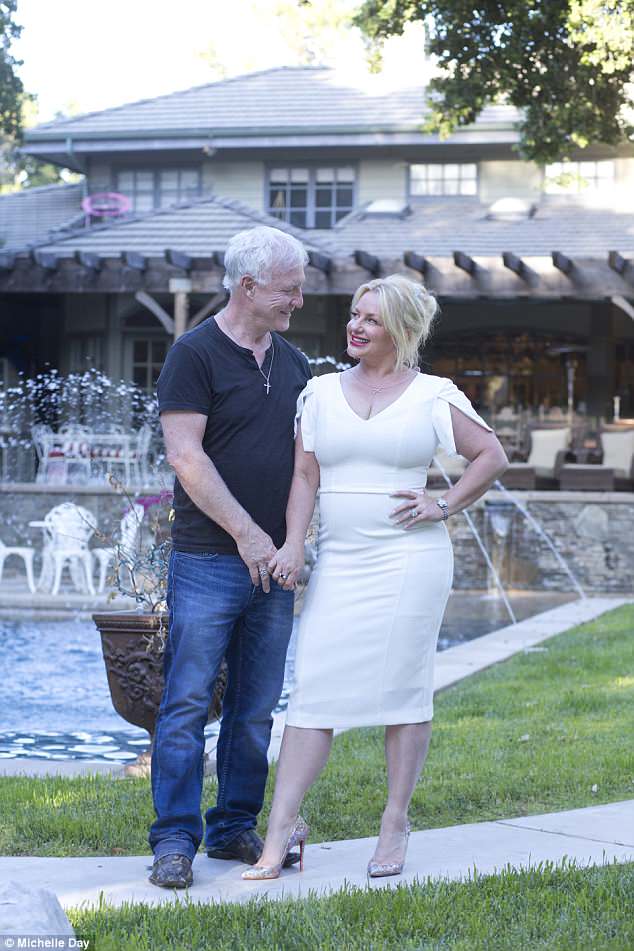 Emma and Michael at their sprawling seven-bedroom house. Michael is Emma’s fourth husband 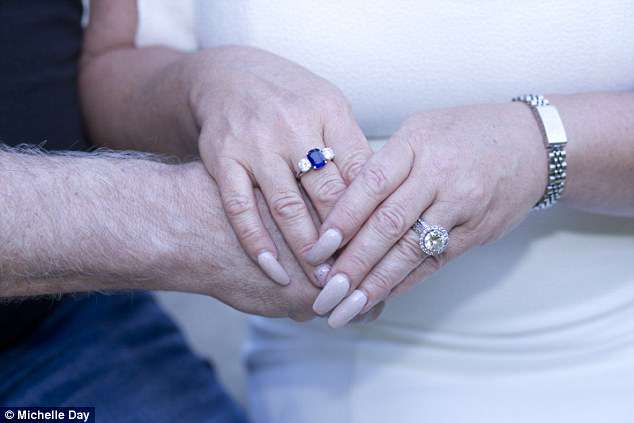 At 14 she was pictured in school uniform and suspenders, pouting into the cameras while clutching a teddy bear.

‘Back then I thought it was fun,’ she says, rolling her eyes.

‘I got addicted to the fame and attention. I was on the front pages of newspapers, appearing on TV and film, drinking champagne. I had lots of so-called friends.’

At 15 she ran off to Las Vegas with 30-year-old nightclub owner Robert Pereno.

She says: ‘It was one of the only places we could legally get married. I was pushing every boundary.’

By 17 the marriage was over but Emma had developed an appetite for alcohol and drugs, including cocaine and ecstasy. Today she is drug-free.

Does she blame her mother for a lack of supervision?

‘I don’t blame anyone,’ she replies. ‘I was headstrong and wild. Back then I thought it was fun, very rock and roll.’

At 19 she moved to LA hoping to turn her notoriety in the UK into international stardom.

With less than £200 in her pocket she stayed with a friend and worked in a clothing store.

There was a brief unsuccessful career as a rap singer called Goldilocks followed by endless auditions, all of which ended in failure.

‘It was soul-crushing,’ she says, shaking her head. ‘It was rejection after rejection.’

She sought consolation with a string of older, wealthier men.

The couple married in 1997 when Otis was a year old, but split up less than 12 months later.

‘I was depressed and desperately seeking something. I thought fame would make me happy but it was a false idol.

‘Then I turned to men to try to feel better. But flesh always lets you down.’ 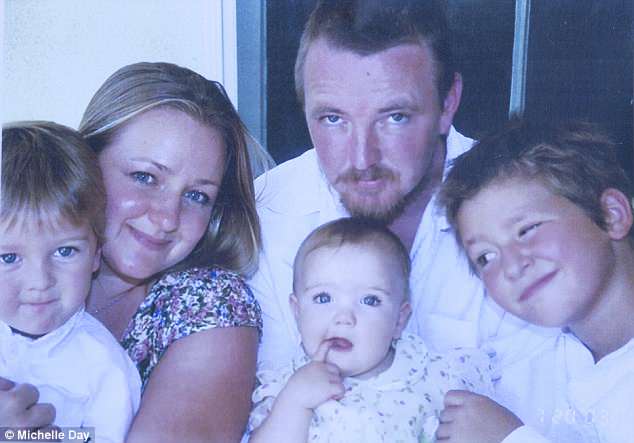 Bankrolled by rich men, she tried one quick fix after another.

She turned to Buddhism and yoga, went to psychiatrists for depression, and took diet pills to stay thin.

Then, in 2004, came a third marriage to building contractor David Tyler, who she met when he was hired to rebuild her house after Otis accidentally burned it down while playing with a lighter. 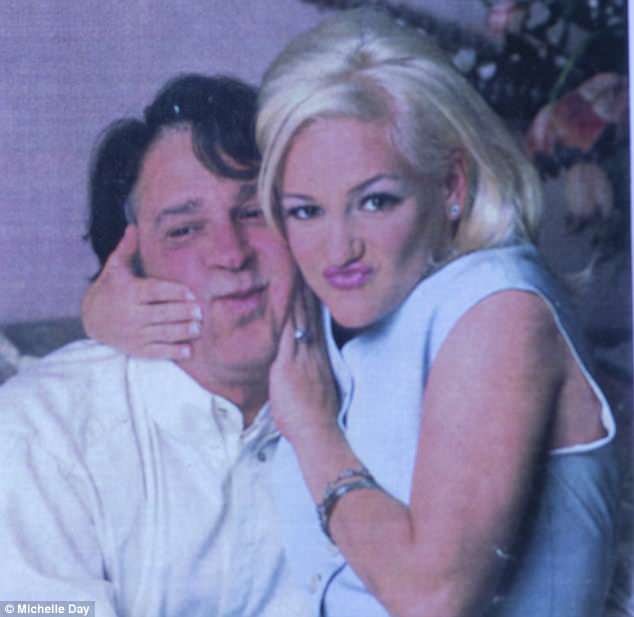 Emma with music publisher Philip Ehrlich, who fathered her first son Otis. The couple married in 1997 when Otis was a year old, but split up less than 12 months later

The couple had two children, Elim, now 17, and Isis, 15, ‘named after the Egyptian goddess rather than the terror group’. Both were born before the couple married.

‘We managed to stay together for 11 years but after six I wanted out,’ she admits. ‘I wasn’t happy.’

Her weight ballooned from eight stone to 17: ‘I ate for comfort. I ate because I was depressed.’

Salvation only came, she says, by moving out of Hollywood to the Los Angeles suburbs, where she found God and started – of all unlikely salvations – a pole-dancing fitness studio called Goddess Fitness Dance.

‘I was classically trained in ballet so I decided to combine that with what I’d learned in nightclubs and I started pole-dancing fitness classes for other mums who wanted to feel sexy again.’

While her third marriage crumbled, her business flourished. But divorce finally killed off both.

‘I’d created the pole-dancing business and it was doing well but my ex was trying to take it off me.

‘In the end I ran the business into the ground and shut it down rather than have someone take it from me.’ 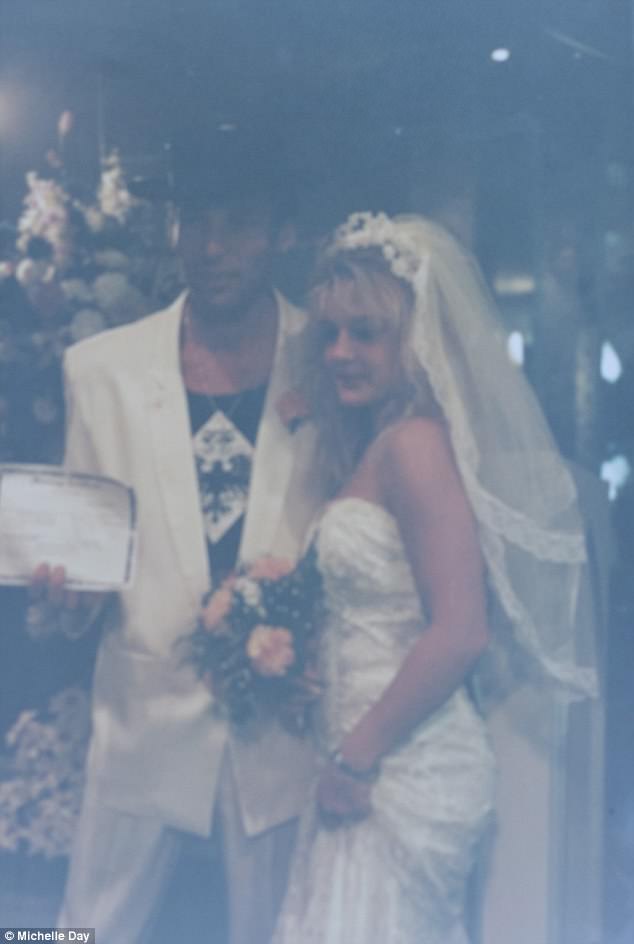 As a born-again Christian, her house is dotted with crosses. She has a Jesus tattoo on her right arm and angel wings on her back.

‘People might think it’s a contradiction in terms because I’m a wild child who found God. But it’s worked for me. I go to church every Sunday.’

She then met fiance Michael, 60. ‘I have this friend who is my spiritual guru and we sat at her kitchen table and prayed to find a good man. The next day I met Michael.’

Softly spoken and from a wealthy family in Colorado, Michael was a successful businessman who ran a thriving video production company.

He also had three failed marriages behind him – but came with the attraction of a trust fund. 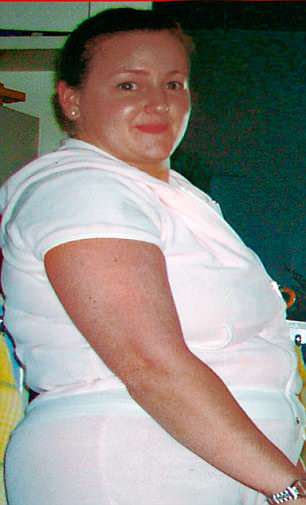 Emma after her weight ballooned from eight to 17 stone

The pair got together six years ago but only recently became engaged, and are planning to marry in August.

‘It’s the fourth marriage for both of us. We hope the eighth time around will be lucky,’ she jokes.

‘I feel like I’ve been on an emotional roller-coaster ride and it took moving away from all the glitz and glamour to find what really matters in life.

‘Sure, Michael is successful, but he also loves me fat or thin.’

They recently moved into their sprawling villa which is on a three-acre plot an hour away from the bright lights of Sunset Strip.

Telltale signs of her ‘old’ life adorn the interior.

In the bar, there is a photograph of Emma on that Morecambe And Wise Christmas Special.

A black-and-white shot of her as Miss Pears Soap, taken when she was a baby, sits in the living room.

But Emma was never one for looking back and now it’s time for a new venture.

She and Michael have started an online dance channel called tvdance.live that Emma says has brought her back to her roots.

‘I was the girl who danced on tables in nightclubs and built a business on pole-dancing for fitness, now I’m hoping to reinvent myself again.’

Isis is now the same age Emma was when she eloped to Vegas and married for the first time. 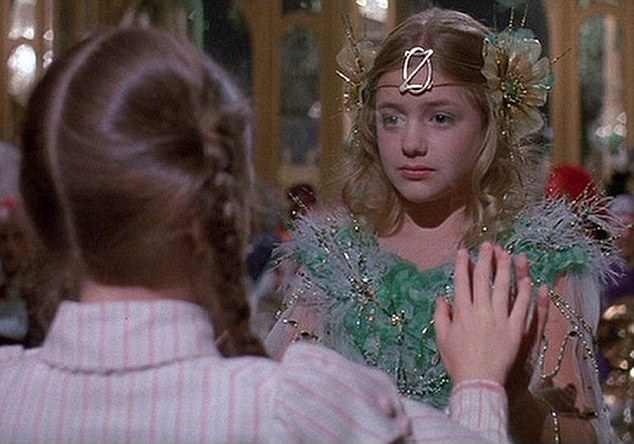 Mother and daughter have had some spats, mostly about Isis throwing wild parties in the house when Emma and Michael were out of town.

‘I tried to read her the riot act but she looked at me and said, “Well, Mum, so what were you doing at 15?”

‘There isn’t anything you can say to that. My daughter is headstrong like me.

‘I want to protect her but I know she needs to learn the tough lessons in life by making her own mistakes – just like I did.’