Mother, 26, left blind in one eye after suffering a STROKE in Nando’s at 32 weeks pregnant is hailed by One Born Every Minute fans for her positive attitude

A mother who safely welcomed her baby on One Born Every Minute after suffering a stroke that left her blind in one eye at 32 weeks pregnant has been praised for her strength and bravery by fans of the show.

Rose, 26, who was expecting her first child with her partner Darren, 31, from Birmingham, recalled eating dinner with a friend in Nando’s on the Channel 4 documentary, and said: ‘I literally couldn’t talk. I couldn’t stand up and I just had no function in my brain’.

The mum, who has a child from a previous relationship and lost another to stillbirth, was rushed to hospital in Birmingham, where she was told she had a blood clot on her brain.

Doctors warned the terrified expectant parents the clot-busting medication Rose needed could pose a risk to their unborn baby – only for them to be told it had not taken effect.

Instead, doctors had to thread a catheter through an artery in her groin to remove the clot in her brain.

Five weeks after their gruelling ordeal, the couple welcomed daughter Grace, at 6lbs 4oz, and Rose described herself as ‘really lucky’, prompting fans of the show to praise their ‘great attitude’ in the face of trauma. 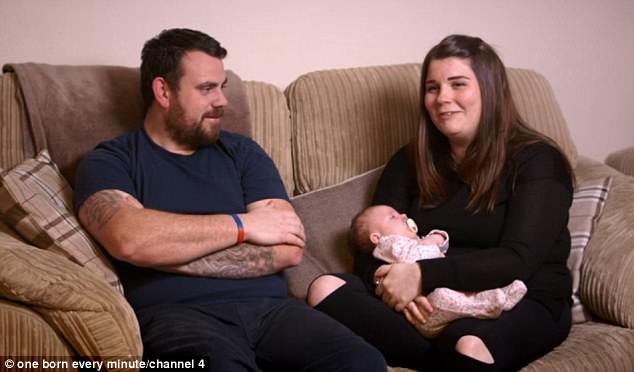 Rose, 26, and Darren, 31, were expecting their first child together – when at 32 weeks pregnant she had a major stroke 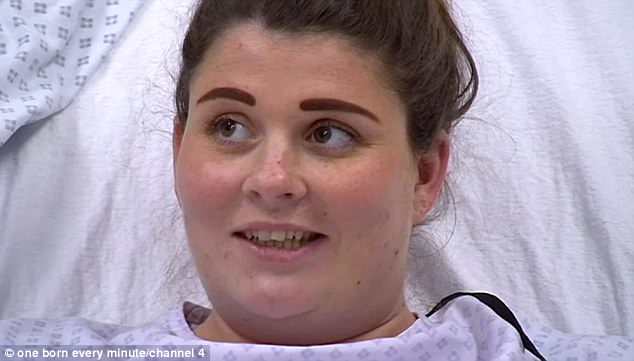 ‘Holy s*** you just don’t know what’s around the corner! #oneborn’ said one viewer on Twitter.

‘A stroke? Bless her, women are so strong,’ added another.

Rose explained in the docu-drama, set in Birmingham Women’s Hospital, that her first child was stillborn due to pre-eclampsia, but her second had been born without any issues.

It was while she was pregnant for the third time that Rose suffered a stroke.

She said on the show: ‘I was just sat in Nando’s. My friend went to the toilet and when she came back my speech was just completely gone and I literally couldn’t talk.

‘I couldn’t stand up and I just had no function in my brain. I remember looking at my friend and thinking “oh, she’s crying”.’ 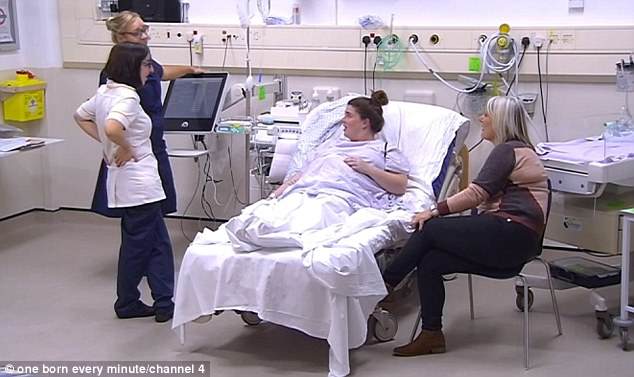 The expectant mother had to have an operation on the blood clot when the medication didn’t work. Doctors had to go through her groin to remove the clot from her brain Because Rose had been placed under anesthetic for the caesearean, Darren was the first to meet his new child

She later told a midwife in the programme: ‘I was just blank. I got taken to Heartlands [Hospital in Birmingham] and they gave me a thrombolysis and took me into the MRI.

‘They said to me “you have had a major stroke”.

‘They needed to do a clot-busting drug, but [said] we don’t know what the effect will be on the baby because it might break down the placenta.

‘But they were like your life comes above the baby’s. They had to counsel me into the decision.’

Partner Darren, who is stoutly phlegmatic, said: ‘There was no way they could do anything for the baby anyway.

‘Rose wasn’t strong enough, and you have to do what you have got to do.’

But the medication failed to take effect and doctors had to perform a thrombectomy, which sees a catheter threaded through an artery in the groin and used to extract the clot from the brain.

‘The clot-busting drug didn’t work anyway and so they went up into my groin and into my brain and pulled my blood clot out of my brain.’ 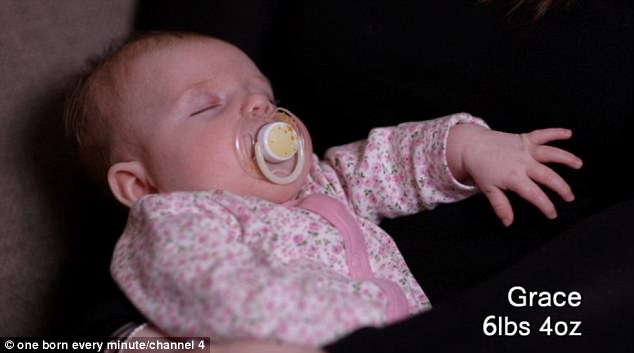 The couple welcomed Grace weighing 6lbs 4oz, and later said the journey to meet her was crazy HOW CAN F.A.S.T SAVE YOU DURING A STROKE?

The main symptoms of stroke can be remembered with the word F.A.S.T.

This will help you more quickly identify someone having a stroke.

Because the blood clot was treated so efficiently, there was minimal brain damage but lasting side effects of the stroke included loss of sight in her left eye and extreme fatigue.

Rose explained that Darren’s calm nature helped her to remain relaxed and positive ahead of the caesarean birth.

‘I did recover really well, I was really lucky, there’s nothing compared to what it could have been could it,’ she said.

Rose had to be put under general anesthetic to prevent her from losing too much blood during the c-section and so when baby Grace was born she was handed straight to her father.

‘Because of what has happened in the past with the stillborn and then the stroke it will be a relief to be honest to know that they are both safe,’ he said ahead of meeting his daughter for the first time.

Just a few weeks later, the couple reflected on their complicated pregnancy: ‘It’s crazy that she is here, the little fighter. If only she knew what it took to get her here.’

Darren added: ‘I’m just relieved it’s all over and done with, we made it.’