Pretty Little Thing has whipped its Instagram fans into a frenzy after sharing a picture of a model wearing a pair of ‘optical illusion’ leggings.

The online retailer reposted a snap shared by curve model Leslie Sidora, from London, sporting one of their cut-out bottoms.

However, the sheer panels left many fans baffled over whether the leggings were in fact shorts or trousers.

Many of their one million-strong following took to the brand’s social media page to question what the pants, which retail at £30 and also come in black, were called. 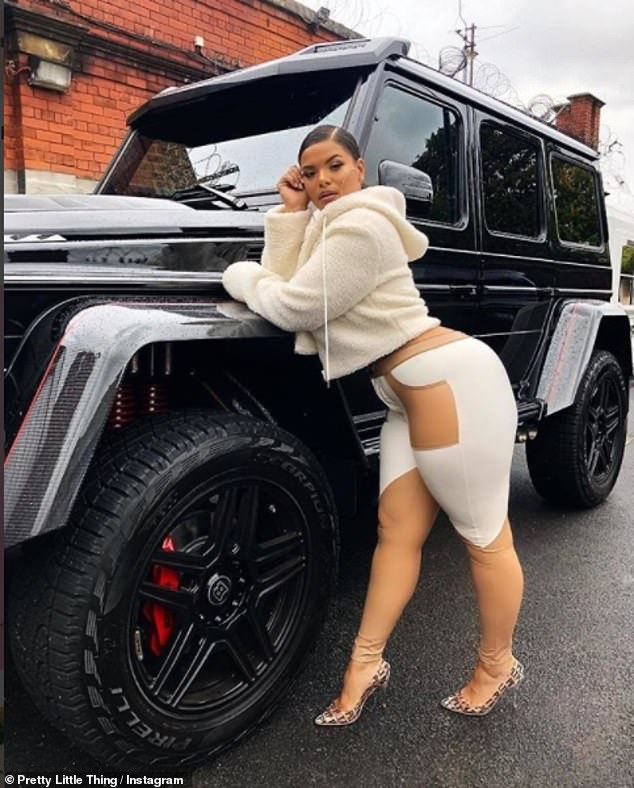 Originally shared by French-born influencer Leslie Sidora, the leggings are nude from the tops of the thighs to the ankles, as well as featuring cut-out panels across the pockets and elastic.

The remainder of the garment is cream coloured, giving the illusion of cycling shorts.

And the edgy garment certainly divided opinion among followers, with one writing: ‘Wait they’re not shorts? Lmao well that made me even more confused.’

‘What are those?’ Followers amid their 1 million-strong following took to their social media page to question what the pants- which retail at £30 and also come in black, were classed as.

Another added: ‘What are those?’, while one agreed, writing: ‘Woah too confusing!’

Agreeing, one fan wrote: ‘Me too at first I thought they were shorts’, and another added: ‘Those pants kinda confuse me’.

Trying to figure out whether the leggings were shorts or trousers, another wrote: ‘These leggings had me confused’, while one agreed, writing: ‘I literally said the same thing to myself’. 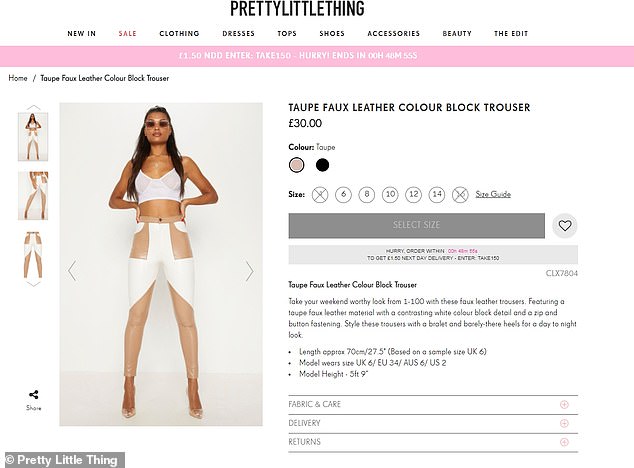 The leggings are nude from the tops of the thighs to the ankles, as well as featuring cut-out panels across the pockets and elastic. The remainder of the garment is cream coloured, giving the illusion of cycling shorts. 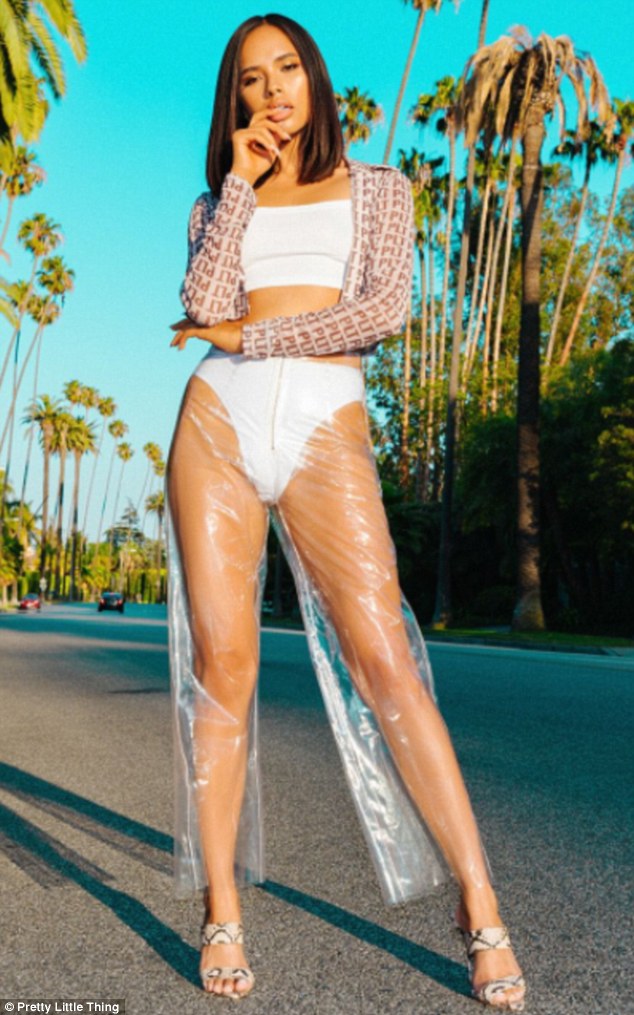 Over the summer the retailer caused a stir when they launched completely see-through trousers costing £30, though recently reduced to £28.

A model for the brand was seen in campaign shots wearing them over very skimpy briefs, and teamed with a white crop top.

The trousers, available in sizes 4 up to 16 with a straight leg design, are fitted around the hips and cropped at the ankles. 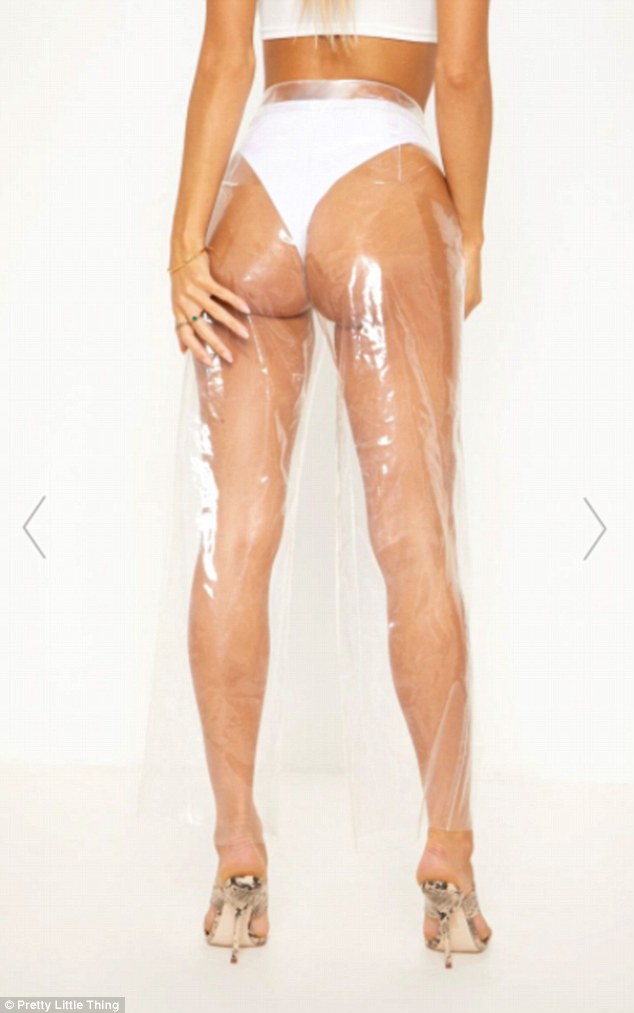 Though their own model flashes her underwear in their pictures, the brand advises that the trousers be worn with hotpants underneath.

The website says: ‘Team with hotpants and a crop top for a look that we are crushing on.’

PrettyLittleThing told FEMAIL: ‘Our Buying and Design team are always straight off the mark in identifying the most up to date and ‘biggest thing in fashion’ to our customers. Having recognised transparent trousers being the latest must have product, we couldn’t wait to bring them to PLT.

‘Having spotted them on the catwalks, as well as on celebrities such as Mabel and Emma Louise Connelly, we’re excited to bring this latest catwalk trend at an affordable price of £30.’ 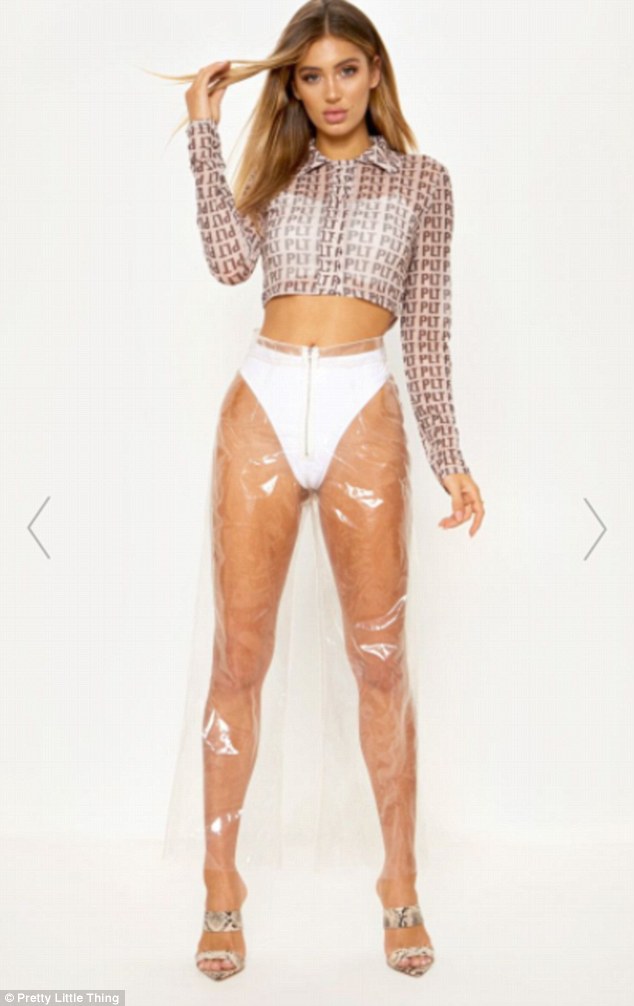 Despite their own styling choice, the brand advises that they be worn with a pair of hotpants