A PrettyLittleThing shopper who bought a dress for her friend’s birthday party was horrified to discover it looked nothing like the picture online.

Morgan Kane, 20, from Dundee, ordered the £25 neon shift dress in the hope of wearing it to the 21st birthday bash.

But she was disappointed when she tried it on at home, saying it was a ‘joke’ because it was so huge. A friend joked she looked like a ‘lollipop lady’. 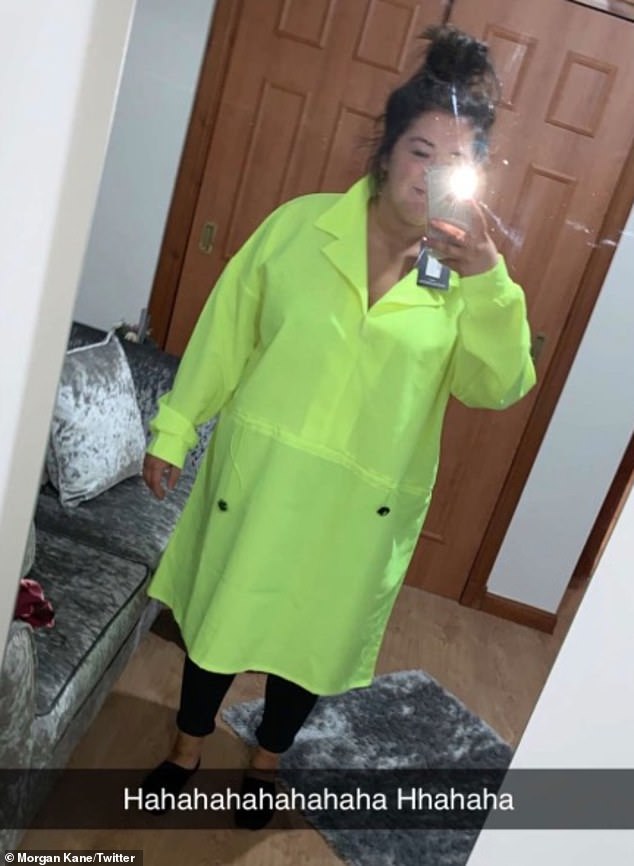 Morgan Kane, 20, (pictured) from Dundee, Scotland, who spent £25 online on a dress for her friend’s 21st birthday was horrified by its appearance once it arrived 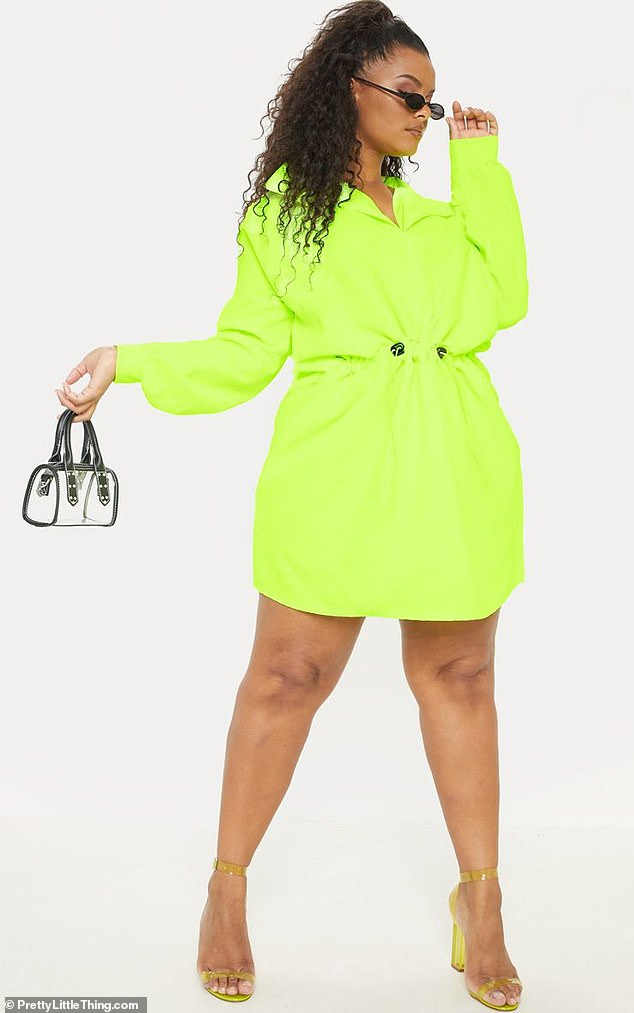 Pretty Little Thing markets the dress as a ‘killer shift dress’ and suggests pairing the look with a clear mini bag and strappy heels. Pictured, a model in the frock online 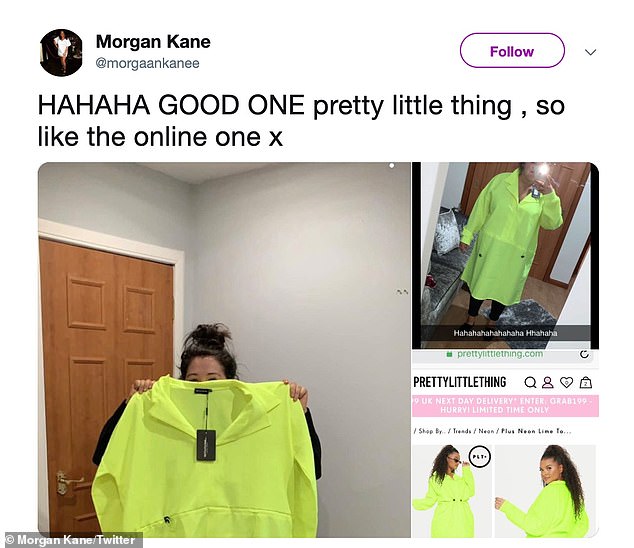 Morgan posted a selection of side-by-side photos of the oversized dress comparing it to the model photo and shared her disappointment on Twitter, pictured

Posting a series of images showing the brightly-coloured dress swamping her, Morgan wrote: ‘HAHHAHAHA GOOD ONE pretty little thing, so like the online one x’

She posted a series of side-by-side photos of the garish oversized dress, comparing it to the design advertised online.

In one, only her forehead and toes can be seen peeping out from behind the blindingly bright number.

Morgan sought help from a friend to take photos of the dress, her friend wrote the caption: ‘Canna believe Morgan’s a lollipop woman.’ 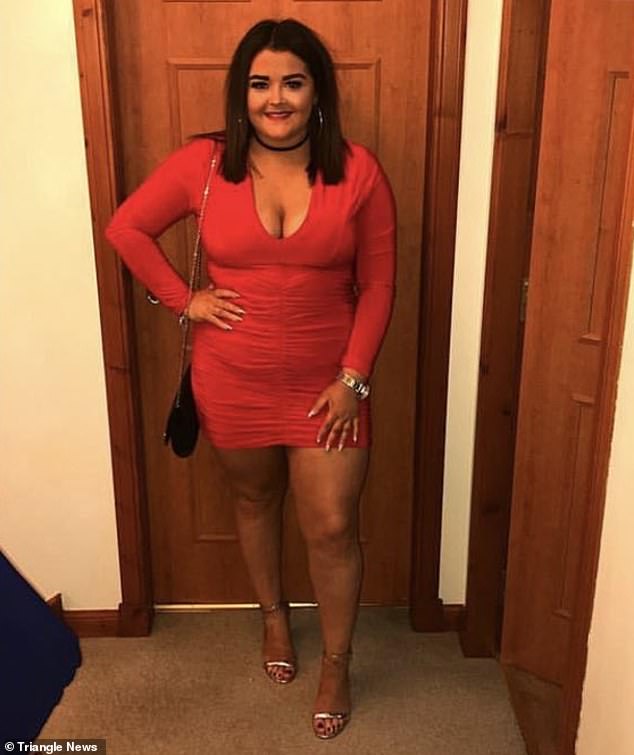 Morgan, pictured in another outfit, had hoped to wear the dress to her friend’s 21st birthday 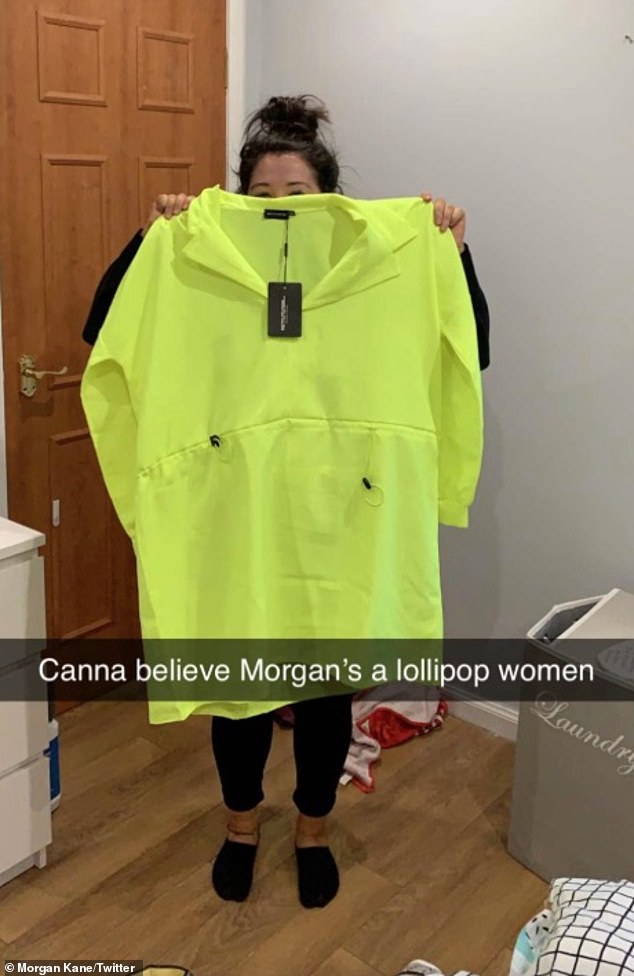 A page showing the dress of PLT’s website describes it as a ‘Plus Neon Lime Toggle Waist Shift Dress.’

But it was not apparent on the model that the outfit was so huge unless the toggles were deployed.

The brand’s description reads: ‘Glow up this season doll in this killer shift dress. Featuring a neon lime material, a toggle tie waist and long sleeves, team it with a clear mini bag and strappy heels for the ultimate ‘out’ out look.’ 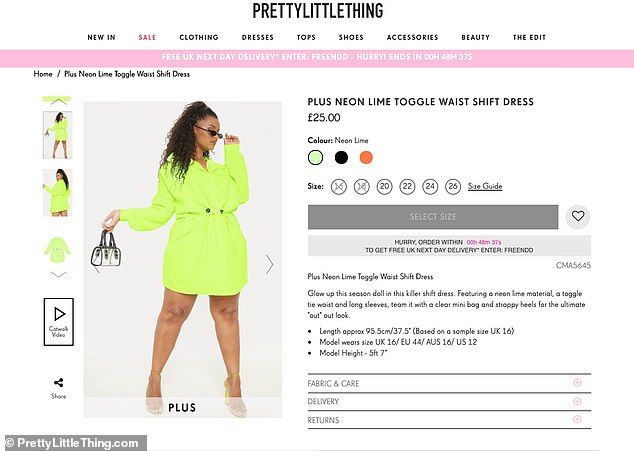 Morgan likened it to a lollipop lady – who traditionally help children cross the road and wear high-vis jackets to make them easily distinguishable to drivers.

She said: ‘I couldn’t believe it how different it was from the photo online.

‘I didn’t expect it – it’s the first time I’ve ever had something been sent to me that bad.’