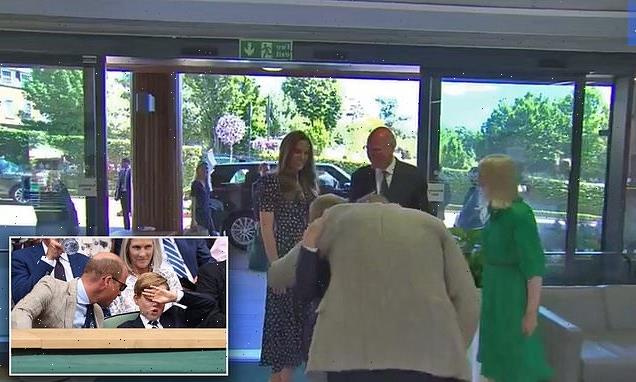 Too hot, Papa! Moment Prince George, 8, told Prince William he was uncomfortable at Wimbledon after his parents dressed him in a formal suit and tie during the heatwave

The Duke and Duchess of Cambridge’s son was every inch the perfect prince in his smart suit and tie yesterday at Wimbledon, but with temperatures hitting 28C it was no wonder the young royal found himself struggling.

A video has surfaced of little George, eight, telling his father Prince William he was ‘too hot’ in his outfit.

After hugging William, the young prince initially said he was feeling ‘ok’ but then complained about the temperature as he walked along with his parents.

Fans on social media also expressed concern about the youngster being too warm, and Royal Editor Robert Jobson tweeted that while William and Kate were being respectful of the All England Club’s formal dress code, nobody would have minded George wearing something less formal.

Arriving at the final with his mother Kate Middleton, the young prince looked smart in his suit and tie.

While Kate introduced her son to Wimbledon officials, he put out his hand to shake theirs and greeted them with a smile.

She then told her son about Ian’s work at the All England Lawn Tennis and Croquet Club.

Kate said: ‘Ian’s in charge of everything here, George. Makes sure everything runs to plan.’

As the camera followed George into the building, he spotted his father William, who immediately held out his arms to hug his eldest son.

Returning the hug, George had something to tell his father.

When Wills asked his son if he is ‘ok’, George responded: ‘yeah’.

But seconds later as he walked further into the building with his parents, the eight-year-old said he was ‘too hot’ in his outfit. 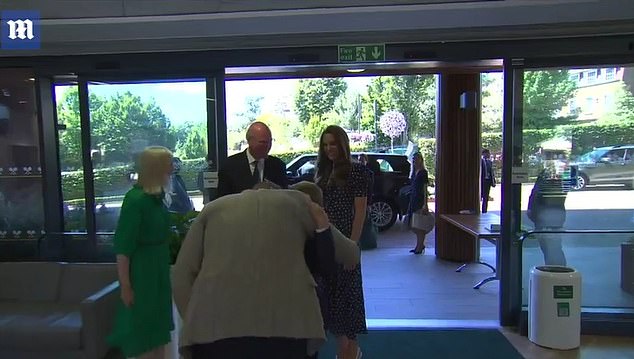 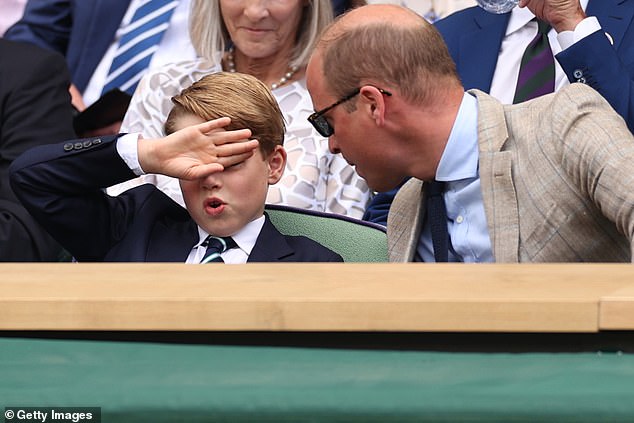 Prince George, 8, was pictured wiping his forehead while his father William checked in on him as temparatures soared to highs of 28 on Centre Court 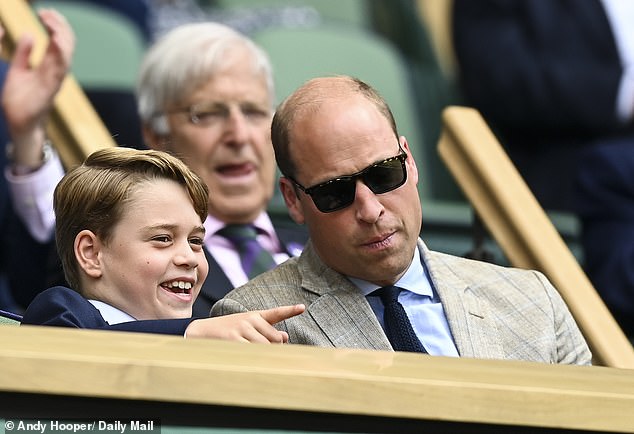 Despite being ‘too hot’ George appeared to have a great time watching the match with his father, which saw Djokovic come back from a set down to retain his Wimbledon title

Kate then advised her son he needed to avoid sitting ‘in the bright sunshine’ and added they are ‘often in the shade’.

As the family made their way through to the court, they greeted servicemen and women before the match.

George beamed and nodded along while speaking to a woman in uniform.

Temperatures at Wimbledon soared on Sunday afternoon as Novak Djokovic faced off with Nick Kyrgios, before reigning champion Djokovic retained his title.

While George was thrilled by the four-set match in which Djokovic triumphed following a loss in the first set, the king-in-waiting looked a little uncomfortable in the Royal Box.

Sitting in his prime spot on Centre Court between Kate, who stunned in a £1,335 navy polka dot dress from Alessandra Rich, and William, who donned a stylish beige blazer, George patted his head and looked a little flustered. 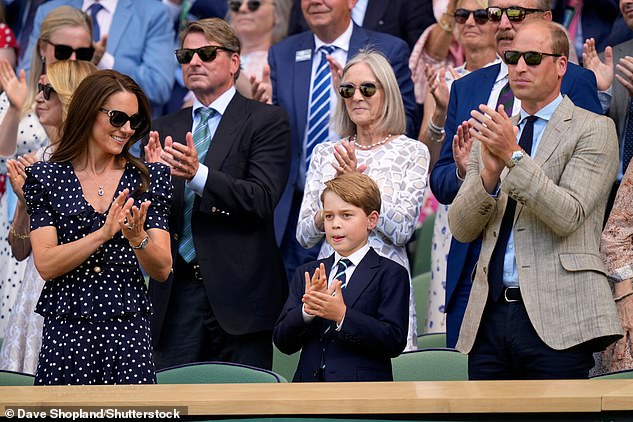 Kate, pictured in a stunning polka dot dress from Alessandra Rich, sat with her son George and husband William in the royal box as they watched Nick Kyrgios take on Novak Djokovic

Photos showed doting father William checking in on his son while he tried to cool himself down.

Some viewers took to Twitter to express their concern for the young prince in his suit.

One person wrote: ‘Why do they dress him in a suit and tie and in this heat.’

Another said: ‘Poor Prince George in a shirt, tie and jacket in that stifling heat.’

As colourful Kyrgios became frustrated throughout the match, viewers were also concerned George might be exposed to some choice language perhaps hadn’t heard before.

Another Twitter user suggested: ‘Don’t think little George has heard such language before!’