Federal Resources Minister Madeleine King is resisting the calls for intervention. She announced on Thursday a ‘heads of agreement’ deal with east coast Australia’s three LNG exporters, including a promise to offer all available gas supply to local buyers before selling to the global market and to limit the price to export parity. 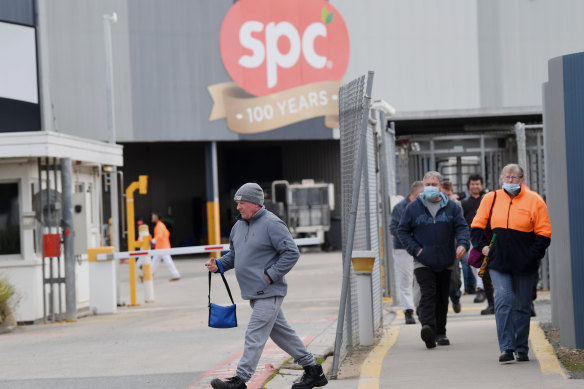 SPC is one of the manufacturers hit by rising energy costs.Credit:Justin McManus

An international ban on Russian energy exports is fuelling a global energy crunch that is expected to last for years and Australia’s allies and major gas customers Japan and Korea are pressuring the government not to intervene in the market.

They want to ensure Australia’s exporters can honour long-term contracts and send all available gas onto the spot market ahead of the Northern Hemisphere winter.

The competition watchdog last month forecast a shortage of 56 petajoules in 2023 and under the new deal LNG companies will offer the 157 petajoules that won’t be tied up in export contracts to the domestic market.

Since 2019 several major manufacturers including Qenos and Dow Chemical in Melbourne and Incitec Pivot in Brisbane have blamed energy costs for their closure.

Local manufacturers that use gas heating in food and drink production are already passing on higher energy costs to consumers.

“Most local businesses have multi-year gas contracts and many are coming up for renewal and businesses are seeing a doubling or more of their future bills coming at them,” Reed said.

The Australian Workers Union wants the government to reserve gas from the Queensland LNG exporters like the state government does in Western Australia, and slap a windfall tax on the record profits the LNG companies are making.

“As the world’s largest exporter, Australia has a role to support the global demand for gas – but we must put our own businesses first,” AWU acting national secretary Stephen Crawford said.

“The federal government and Australia’s gas producers had an opportunity with this agreement to shield Australian customers from the extremes we’re seeing globally, but they have chosen not to,” Eade said.

Australian Aluminium Council chief executive Marghanita Johnson said the “pendulum has swung too far in favour of exports” and said the government must act to lower energy costs.

King said on Friday the additional gas supply promised by the producers would put “downward pressure on prices” .

“This agreement will strengthen confidence in the domestic gas market and safeguard our global reputation as a stable and reliable exporter to our regional partners,” she said.

Separately to the heads of the agreement, the federal government is reviewing Australian Domestic Gas Security Mechanism. The current rules allow the government to pull the trigger once a year to reserve gas for domestic use and King is considering powers for more frequent export control.

However, this could trigger costly compensation claims from LNG companies.