With the horde of ageing rockstars currently traversing the globe to top up their retirement incomes, it is no wonder fans hold tingling concerns that they may have paid hundreds of dollars to see a Weekend at Bernie's remake, and not the bands that composed the soundtrack of their youths.

Fortunately for tens of thousands of Queen fans at Perth's Optus Stadium last night there was not a string in sight. 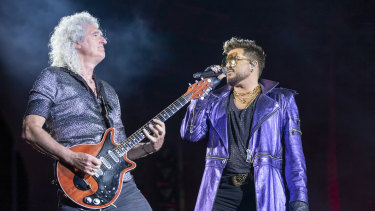 Brian May and Adam Lambert in Perth on Sunday night.Credit:Kelly Pilgrim-Byrne

In their third last show of the 2020 Australasian Rhapsody tour original Queen members, Brian May and Roger Taylor wowed a near-packed stadium, thanks in-large part to the showmanship and range of former American Idol runner-up Adam Lambert who now fronts the band.

After a 15-minute delay, the band launched into Innuendo from the 1991 album of the same name with Lambert’s impressive vocals setting the tone for the rest of the evening.

Lambert appeared to borrow fashion advice from George Michael at the start of the night, donned in an extravagant purple leather coat. The costumes became more bedazzled as the night went on.

May wore a glittery shirt at the start of the show but as the show went on he opted for more comfortable attire until the end of the evening where he ended up in a t-shirt and jeans. The guitarist still sports his long curly hair, albeit it is whiter than in the band's heyday.

Lambert’s rendition of Killer Queen borrowed late frontman Freddie Mercury’s exaggerated diva style while Bicycle Race saw him appear at the front of the stage on a diamante-encrusted Harley Davidson.

The pace picked up for tracks such as Another One Bites the Dust and I Want it All until May picked up an acoustic and sang a rendition of Love of My Life flanked by footage of Mercury also singing the track. In a touching moment, May wiped a tear from his eyes after finishing the track. 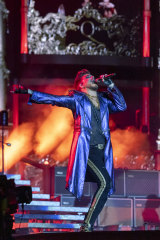 The catchy hook of Under Pressure was enough to get the crowd up, even those whose doctor would recommend avoiding standing for long periods of time.

A cover of Led Zepplin’s Whole Lotta Love and Elvis’ Heartbreak Hotel was followed by 1984 track I Want to Break Free.

One of Mercury’s last songs Who Wants to Live Forever was accompanied by an impressive laser show and preceded a 10-minute atmospheric guitar solo from May who was seemingly stood atop an asteroid illuminated by a red spotlight.

The band finished the night with Radio Ga Ga and Bohemian Rhapsody before their encore of We Will Rock You and We Are the Champions.

While they might move a bit slower than they used to, none of the older blokes faltered.

Having played these songs thousands of times throughout their careers, May and Taylor could play these instruments with their eyes closed. In fact, for much of the time during his solos, May did exactly that.

May described Lambert as the band’s ‘gift from god’ earlier in the night and it is easy to see why. While he is no replacement for Mercury (which he admitted to freely), his charisma and vocals are just as engaging and he does the songs justice as few others could. 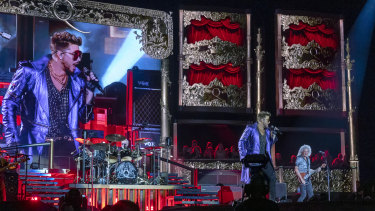