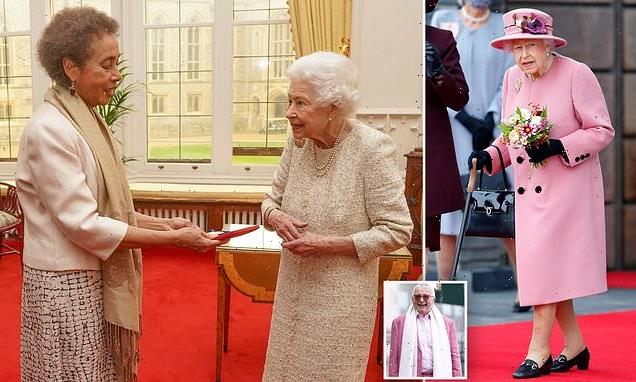 Queen IS using a wheelchair and is cancelling engagements because she is ‘very proud’ and ‘doesn’t want to be seen’ struggling, Christopher Biggins claims

The Queen is using a wheelchair and is cancelling engagements because she is ‘proud’ and ‘doesn’t want to be seen’ struggling, Christopher Biggins has claimed.

Speaking on GB News this morning, the panto star said: ‘I have heard that the reason she’s not doing a lot of the events that she should be doing and cancelling them is because she is in a wheelchair.

‘She doesn’t want to be seen, she’s very proud. She’s our greatest ever monarch. It’s so very sad and I hope she is able to make her anniversary celebrations.’

It comes after reports Buckingham Palace has a meticulously-orchestrated ‘military-style’ plan to take the Queen, 95, to Prince Philip’s memorial service next week.

The operation is said to include flying Her Majesty from Windsor Castle to Buckingham Palace by helicopter, transporting her by car, and using a private screen to shield her from photographers. 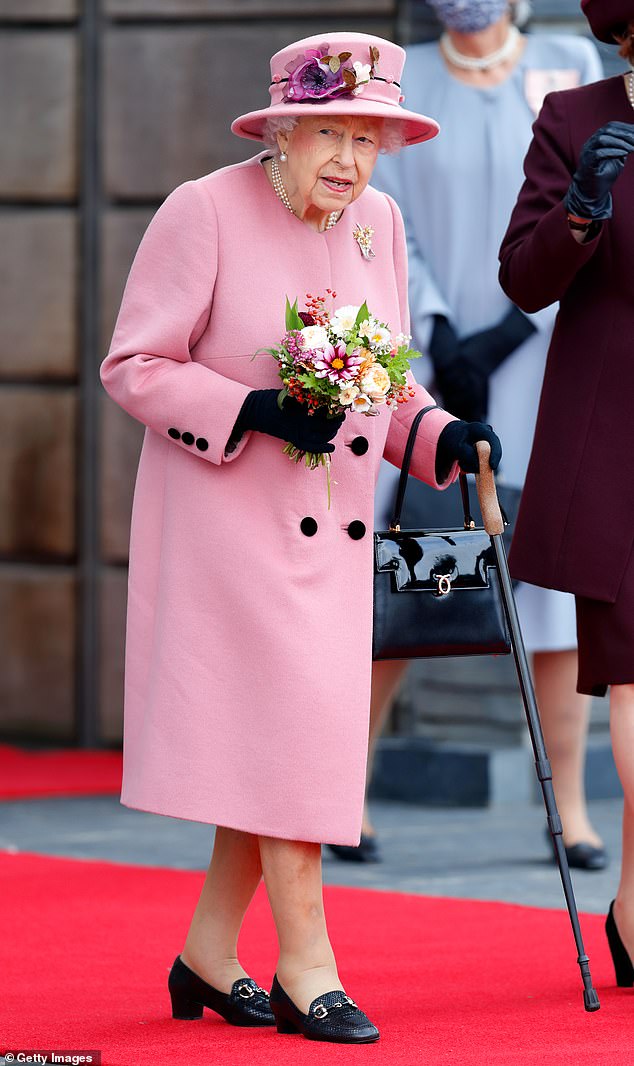 The Queen has cancelled official engagements because she doesn’t want to be seen in a wheelchair, Christopher Biggins has claimed. Pictured, the Queen in October 2021

One source told the Mail on Sunday that Her Majesty does not want to be seen in public in a wheelchair over fears of replicating a ‘haunting’ photo taken of her late sister Princess Margaret in the months before her death.

She continues to carry out short engagements in person, such as holding private audiences at Windsor Castle, but pulled out of the annual Commonwealth Day service at Westminster Abbey last Monday.

The Queen has used a walking stick on a number of public engagements but has never been seen in a wheelchair.

Asked by Eamonn about comparisons to Princess Margaret, Biggins said it was ’embarrassing’ for Her Majesty.

Responding to reports that the Queen has had a wheelchair-friendly lift installed at Craigowan Lodge, her favourite cottage at the Balmoral estate in Aberdeenshire, Biggins claimed installing lifts in houses is all the rage. 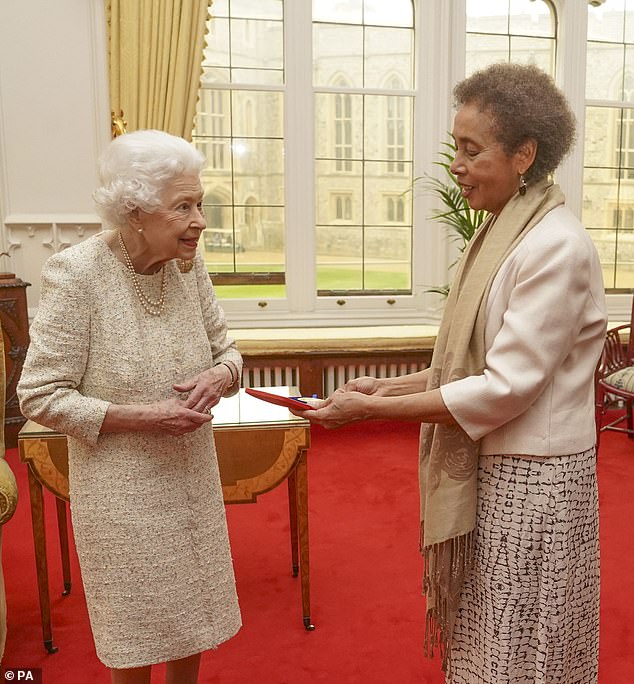 ‘Everyone I know is putting in lifts,’ he said. ‘You can fit a lift very, very cheaply if you have the space. Two flights of stairs for me now is quite something.’

It comes after the Queen pulled out of the Commonwealth Day service last week over concerns for her ‘comfort’ on the 60-mile trip, and whether she could manage having to sit in Westminster Abbey for more than an hour.

But she is determined, sources say, to attend the thanksgiving service for the Duke of Edinburgh, who died last April at the age of 99.

The Queen wants to walk for as long as possible and has so far ruled out using a wheelchair in public.

But according to the Sun, the option of assistance has been explored so she can get around The Cloisters, the south and east parts, more rapidly and in comfort. 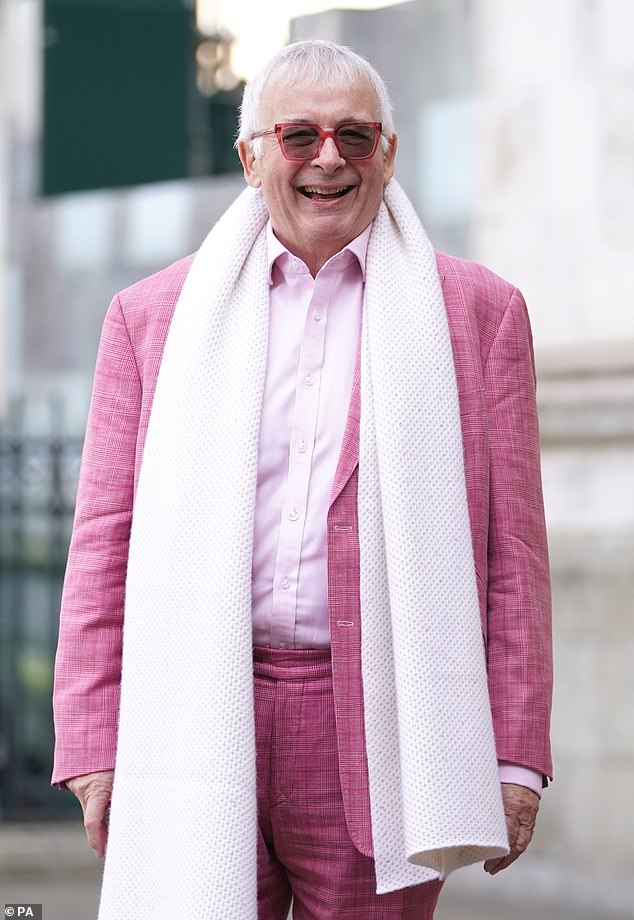 Asked by Eamonn about comparisons to Princess Margaret, Biggins said it was ’embarrassing’ for Her Majesty. Pictured, Christopher Biggins at the Service of Thanksgiving for Dame Vera Lynn today

The Queen is expected to be flown 15 minutes by helicopter from Windsor Castle to Buckingham Palace.

The head of state will then be driven the short distance from the Palace to Westminster Abbey, reports the Sun on Sunday.

The entire Dean’s Yard will be sealed off under the plans, which also include six-foot privacy screens and a potential football-style tunnel which would block any photographer’s view as she exits her vehicle.

Aides then believe she can be delivered into the Abbey at Poets’ Corner and needs only a short walk to take her seat in The Sanctuary. 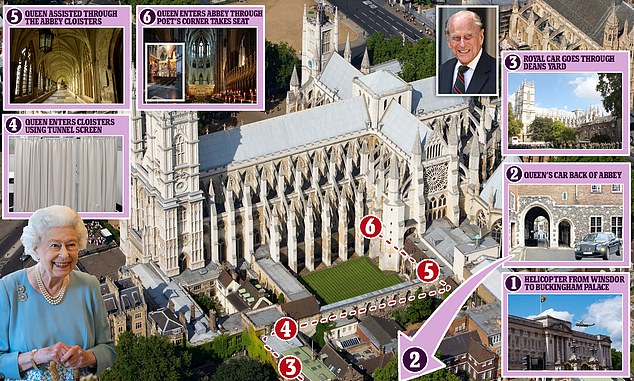 The is determined, sources say, to attend the thanksgiving service for the Duke of Edinburgh, who died last April at the age of 99. A plan is said to be put in place to make it possible

Whether she can be seated before the audience arrives rather than arriving last, as is tradition, is also being explored.

Ingrid Seward, editor-in-chief of Majesty Magazine, told the Sun: ‘Understandably, the Queen doesn’t want to be seen in a wheelchair.

‘But as the Head of State and someone who wants to be seen and needs to be seen, she might concede to a wheelchair. The best way of doing that is to make sure there are no photographs taken.

‘This could be a dress rehearsal for everything at the Platinum Jubilee. I think she wants to go as she knows Philip would want her to be there.

‘She will be thinking that if it was her thanksgiving ceremony, he would move Heaven and Earth to make sure he was there.

‘She would really hate to miss it. It is a headache for her staff as it would be difficult for anyone of her age who suffers mobility problems. It would be a painful process for her.’