Royal blue! Queen Maxima of the Netherlands dazzles in a fur-trim dress and statement earrings as she and King Willem-Alexander wave to fans outside the Royal Palace in Amsterdam

Queen Maxima of the Netherlands looked in high spirits today as she waved to fans outside the Royal Palace in Amsterdam.

The Dutch monarch, 48, put on an elegant display in dazzling blue earrings and a  matching fitted gown as she arrived to attend the annual New Years reception.

The royal managed to maintain her typically polished appearance despite windy conditions as she happily gestured to the crowds alongside her husband King Willem-Alexander, 52, at the event. 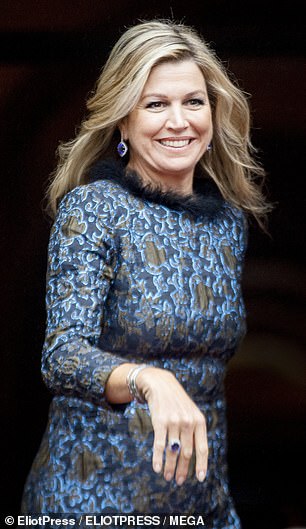 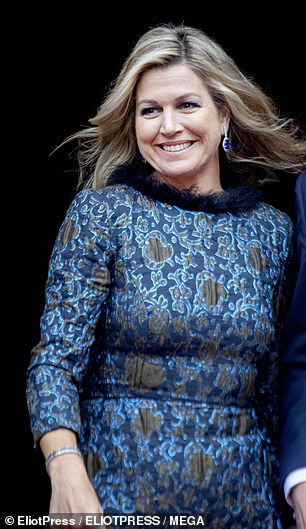 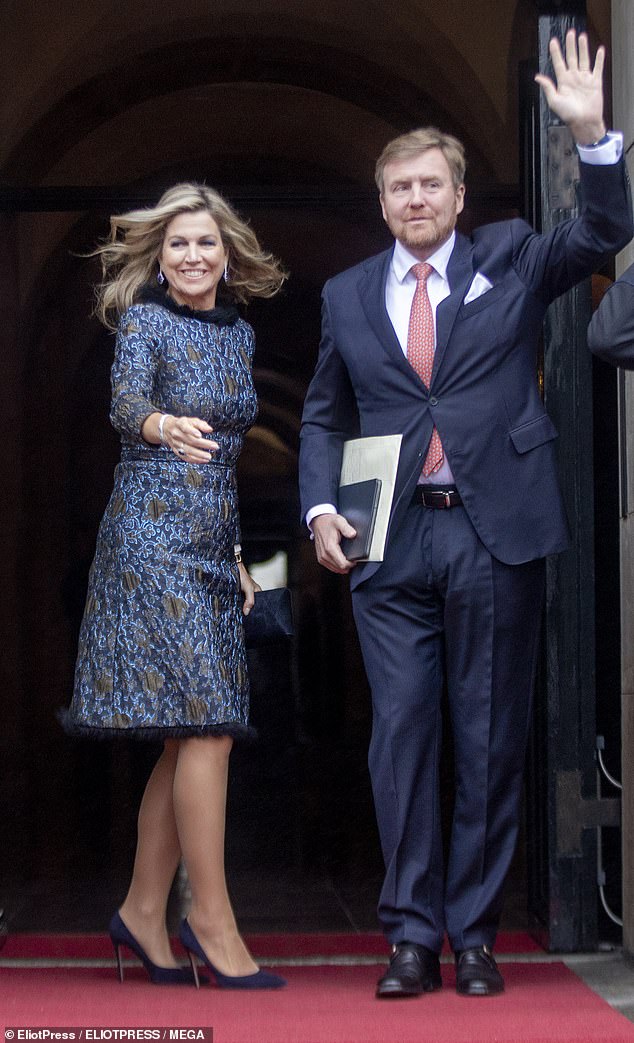 The royal managed to maintain her typically polished appearance despite windy conditions alongside her husband King Willem-Alexander, 52

She returned to royal duties last week in the city of Ugchelen, visiting De Wending, an institution for addiction treatment and recovery assistance.

Today the queen looked stylish in an embroidered knee-length shift dress which cinched in at the waist and was emblazoned with an intricate two-tone blue and grey pattern.

The chic gown boasted a navy blue fur trim around the collar and hemline and Maxima donned a pair of suede stiletto heels to finish off the outfit.

She teamed the sophisticated ensemble with a pair of statement teardrop sapphire earrings. 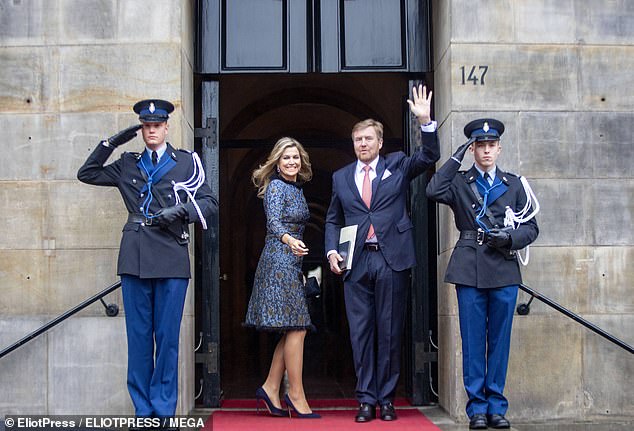 The couple, who share children Catharina-Amalia, 15, Alexia, 13, and Ariane, 11, waved happily to onlookers as they entered the event

On her hands she wore a matching blue ring, paired with silver bangles, and carried a navy blue suede clutch bag in her other hand.

Her windswept blonde hair was worn loose around her shoulders while her make-up was natural to show off her glowing complexion, with a subtle hint of blue eye-shadow.

The pair looked close as they shared a smile in front of their royal onlookers. King Willem-Alexander looked smart in a navy blue suit, which he matched with a red and white patterned tie.

He cut a handsome figure, finishing off her outfit with a white pocket square and a pair of dark purple leather brogues.

Dutch Princess Beatrix was also present and waved at the reception as she arrived wearing an elegant monochrome dress which she paired with a black wrap adorned in fluffy pom poms. 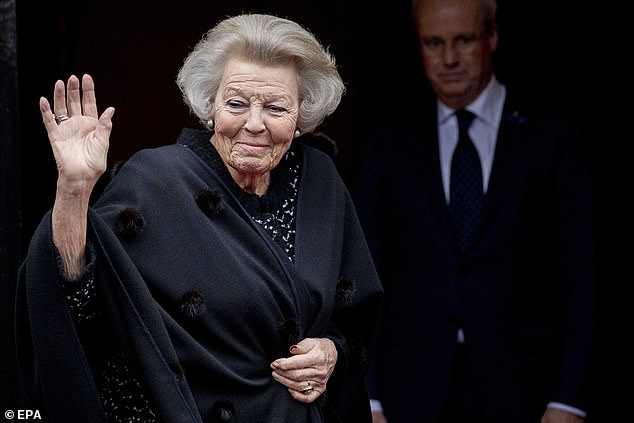 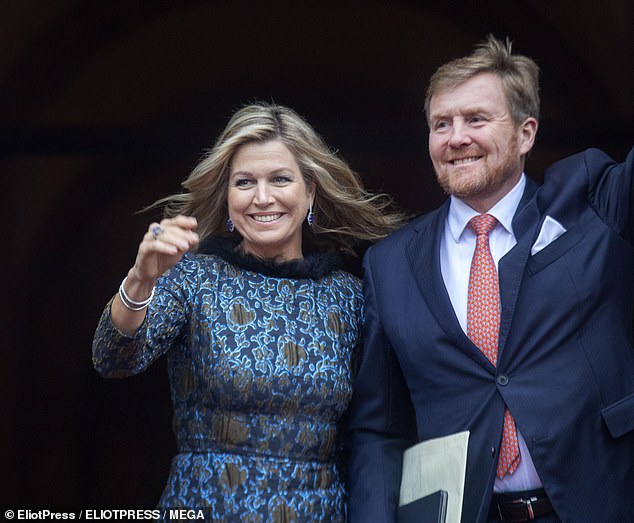 The queen’s windswept blonde hair was worn loose around her shoulders while her make-up was natural to show off her glowing complexion, with a subtle hint of blue eye-shadow 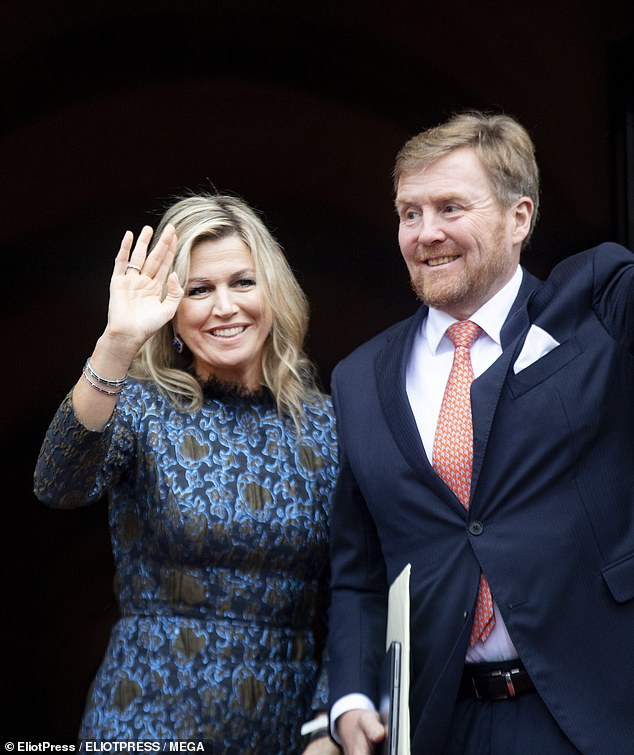 Maxima, an international financier by trade, married Willem-Alexander in 2002 in Amsterdam. They were seen smiling before the event

Last Wednesday, the royal showed off her sartorial prowess in her first public event of the decade after taking a break from appearances over the festive period.

Maxima, an international financier by training, was married to Willem-Alexander in 2002 in Amsterdam.

She was born in Argentina before she married into the Dutch royal family, three years after meeting her husband-to-be in Seville, Spain.

Her husband Willem-Alexander became king after his mother, Beatrix, abdicated in April 2013 after 33 years as reigning monarch.

Queen Maxima has reportedly said that she had no inkling Willem-Alexander was heir to the throne when they first met.