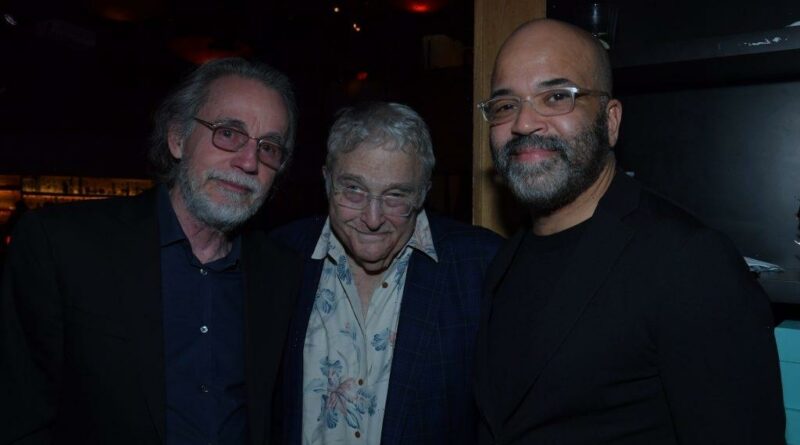 Drummer Steve Jordan — currently between Rolling Stones pickup gigs — led a house band out of the fantasies of anyone who scanned liner notes during the last 60 years, joined by Stones backup singers Lisa Fischer and Bernard Fowler among the serenaders, and jazz players Tom Scott, Billy Childs and Davell Crawford also taking the lead on tribute numbers during a two-and-a-half hour dream jam.

The annual Jazz Foundation benefits at Vibrato (picking up three years after the last, when Joni Mitchell was celebrated in 2019) stand in complement and contrast to the much larger shows the JFA puts on each year at the Apollo in New York, although the musical starpower in L.A. tends to be just as significant, even with a tiny fraction of the east coast’s audience size. And the money raised can be as vivacious at Vibrato. Sunday night’s show raised $430,000 from only about 120 people squeezed into the hilltop venue, between admission prices for the dinner, an auction of rock photographer Henry Diltz’s work, and a late call for attendee largess.

If there was any intrigue going into the show, it was whether honoree Newman would be up to playing, after he made headlines just days earlier saying he needed to cancel spring dates in Europe because he’d broken his neck. In fact, Jordan said that “he’s just gonna chill out and we’re gonna entertain him,” via tribute numbers from Browne, doing “I Want Everyone to Like Me,” and Crawford, doing a gospel-jazzy “Louisiana 1927” with a quartet of backup singers. Yet Newman did manage to entertain, on his own out-of-commission terms, with an explanation of the broken neck that was as brutally funny as you’d expect.

Browne called Newman “one of my heroes — kind of the most heroic of my heroes. I get a little tongue-tied in his presence, so I’m not gonna say very much about him. When Steve invited me to do this, I tried to go through the list of possible songs, and there’s so many that I probably know all the words to but I never have tried to sing; you don’t want to hear anyone but Randy sing those songs. … To try to sing like Randy or try to sing anything he’s written is like going to school. Now, Randy’s written songs about me. I don’t know if everybody realizes that. I got mentioned by name in one.” (That was “A Piece of the Pie,” where Newman sang, “No one gives a shit but Jackson Browne.”) “This is not one where he mentions me by name, but I know he’s talking about me,” he said, introducing “I Want Everyone to Like Me.”

Newman, in accepting the trophy, said, “I love music. I have all my life, as a wee boy 5, 6 years old when I would go see my uncle conduct at 20th Century Fox,” and admired the players’ card-playing abilities between sessions. “I’ve always loved them. And I’ve been right. I think they’re better than regular people,” he said, getting a laugh, “and deserve all the help we can give them. Because some aren’t great at locating” help when they need it, he said. “I never was particularly. I’ve always had to have people help me.”

Addressing the news, Newman said, “I wanted to play tonight, but I discovered over the last six months or so I was getting smaller and smaller. People I used to tower over were catching up to me, and they passed me. So I went to the doctor and he measured me, and he said ‘How tall were you?’ I said 5’11”. He says, ‘Now you’re 5’6” and a half.’ I had lost four and a half, five inches. I thought, is this some kind of short people curse or something? But it wasn’t. I had some pictures taken, and I had a broken neck. So if I were to sing tonight, my head might just roll off.”

There was a gasp from some of the audience at Newman’s comically blunt self-description, before he added: “And then I broke it again, actually, to tell you the truth, unbelievably, chasing the goddamn dog. I’m the only person in America who doesn’t care about dogs, and I broke my neck.”

He expressed some gratitude again to Browne, Crawford and the JFA, gave a shout-out to Tom Scott “and his merry men,” cracked a joke about the lonely unpopularity of jazz oboe players, and announced that he hopes to tower over supplicants again soon. “My plan when I get taller is to push some of these son-of-a-bitches around who, now that I’m little, are just, ‘Got a minute? Got a minute?”’

In a night of often astonishing performances, probably not many attendees would dispute that the knock-down highlight of the evening came from Merry Clayton, who sang Leon Russell’s classic showcase for superpowered vocal stylists, “A Song for You,” in honor of Lou Adler.

Before performing, Clayton described being called in for a 1969 album Adler was producing called “Dylan’s Gospel,” which had her singing lead on two singles, “Times Were Changing” and “Quinn the Eskimo.” “Lou beckoned me to come to him. He said, ‘Are you signed to anybody?’ … Well, a month later, I signed with Lou, and I’ve been with him ever since. He’s a dear friend and a wonderful, wonderful man, and I always called him my angel in this business. You only get one in this industry, and if you can have and hang on to one angel in this business, you’re really blessed. I’m so blessed, I can’t stand myself sometimes. Tonight, this is in honor of my Uncle Lou.”

Also performed in tribute to Adler was another song he produced, Carole King’s “Jazz Man,” led as an instrumental by Tom Scott. He was joined by members of the house band: Patrice Rushen, Ray Parker Jr., Chuck Findley, Bobbye Hall, George Bohannon and Alex Al.

Adler was not present at the dinner, described as being too under the weather to attend. Smokey Robinson was also MIA, for reasons unexplained, but did send in a thank-you video. He was serenaded in his absence by two auxillary Rolling Stones — Lisa Fischer and Bernard Fowler, who sang “My Guy” and “My Girl,” respectively, prior to a group-sing finale of “You”ve Really Got a Hold on Me.”

The JFA honored Maupin for “playing a major role in ushering jazz into the electronic era and remaining at the forefront of progressive art.” Maupin was the one honoree present and ready to perform his own material — “Butterfly” was his selection, with a combo that included Darek Oles, David Arnay, Kenny Sara and Eric McCain taking over from the house band  — although he had a worthy acolyte precede him, in the form of an astonishingly free-flying solo-piano piece from his friend Billy Childs.

Hancock introduced the multireedist Maupin, who found some of his greatest fame as a player on Miles Davis’ “Bitches Brew” album — Davis was mentioned as insisting Maupin pick up the bass clarinet, even though that wasn’t his standard instrument — before going on to found the fusion group the Headhunters with Hancock.

“Bennie has his special sound — he has his way of turning really weird stuff into masterpieces,” said Hancock. “He is a man who has not been given enough recognition for his great talent and the beauty that comes out of the horns that he plays. He plays a lot of different ones, a lot of strange ones. … They’re called bastard instruments, aren’t they? That’s not a bad word.” But Hancock also wanted to establish that Maupin shouldn’t just be praised for his more experimental bona fides. “Benny has a way of playing melodies that he never gets enough credit for. He can make beautiful melodies. I know because when we put the Headhunters band together, Benny was at the heart of those.”

JFA executive director Joseph Petrucelli explained the org’s mission, mid-show: “We’re a national nonprofit based in New York that provides emergency assistance to musicians in their battles at times of crisis. This can be housing assistance, pro bono heath care, employment, disaster relief and direct financial support. Musicians can need this because of illness or natural disasters or something like the pandemic. We’ve been doing this for 33 years as a foundation, and there has never been a more sustained, urgent need for the work we do than in the past two years. We’ve been able to answer the cal for 2000 musicians a year across the country in 43 states. This is more than twice the level of clients and cases that we had prior to the pandemic.”

Longtime music scribe Rona Elliot introduced the auction of classic rock photos by Diltz, who was said to be absent due to attending to a seriously ill companion, with some of the prints commanding five-figure sums. Besides having Newman sign a photo of himself, Elliot had just returned from New York with a freshly autographed photo of Keith Richards she said she’d been guarding with her life on the flight.