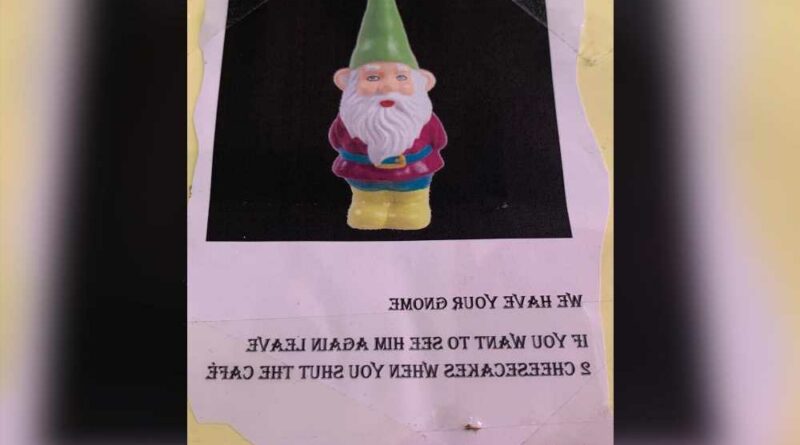 The kidnapping of a cafe’s beloved garden gnome in the Portobello area of Edinburgh, Scotland, has locals mesmerized.

The gnome went missing in early June from the Butternut Squash Café, which was soon sent a bizarre ransom note demanding no money, but cheesecake.

The cafe posted a pic of the note on its Facebook page which read: “We have your gnome. If you want to see him again leave 2 cheesecakes when you shut the cafe, We will be watching.”

The cafe refused to bow to the specific demands and instead left two pieces of shortbread outside the eatery with a note on social media that read: “Kidnappers your treasure awaits…”

The thieves were not impressed and sent another ransom note threatening: “Shortbread!!!!! We asked for cheesecake!!!!! You have 24 hours or your gnome gets dusty binned.”

The cafe held firm and refused to deliver cheesecake. Yesterday the cafe shared a picture of the note, which also included a picture of a broken gnome, on Facebook noting: “We will not negotiate with gnomenappers.”

In the meantime, there is a new gnome in the cafe gardens. The cafe noted: “Even our customers think we shouldn’t be held to ransom… We have a new butternut friend!! Ps cheesecake is sold out for now. #bringbacktheoriginal.”