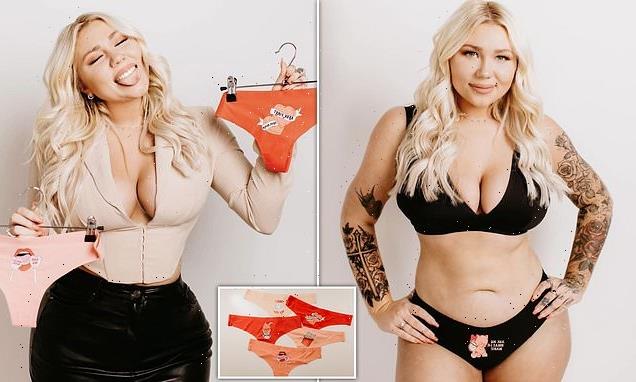 A woman who was violently raped as a teenager has launched her own line of consent underwear to encourage partners to discuss boundaries and ‘ask’ before having sex.

Ella Fairon, from Newport Beach, California, who was a victim of high school sexual assault, has designed a range of underwear featuring slogans such as ‘Ask the cutie before touching the booty’ and ‘Cool cats ask consent’, to prompt partners discuss consent.

She had the idea for underwear brand Assk First after the tragic death of her 24-year-old friend Daisy Coleman in 2020,  who she met when they featured in the Netflix documentary, Audrie and Daisy.

The show brought together teens who had been sexually assaulted in high school. 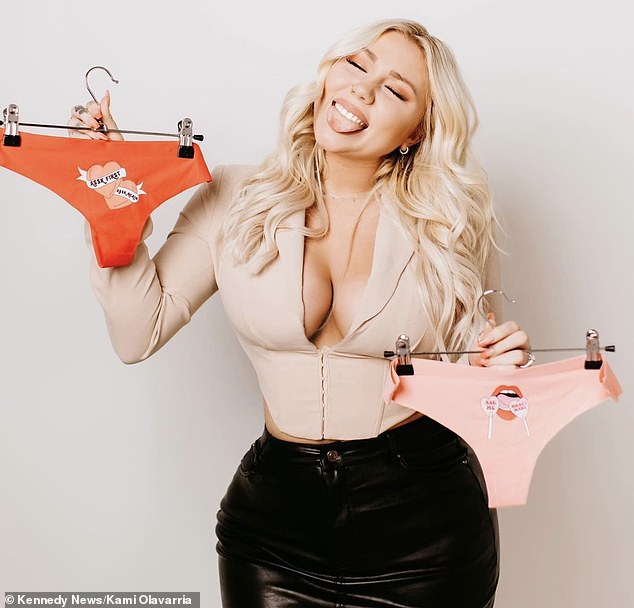 Ella Fairon (pictured), from Newport Beach, California, has launched her own range of underwear to encourage partners to discuss boundaries and ‘ask’ before having sex. 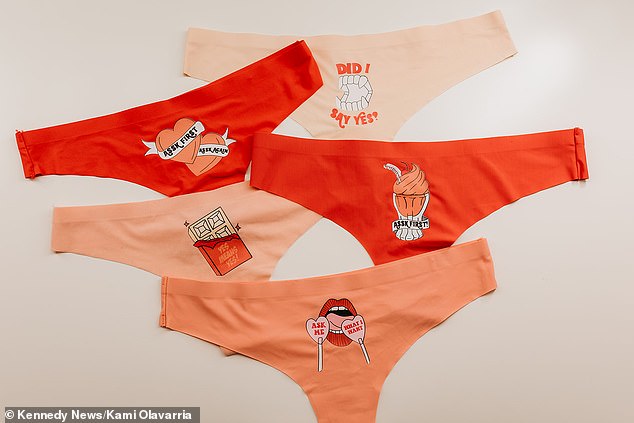 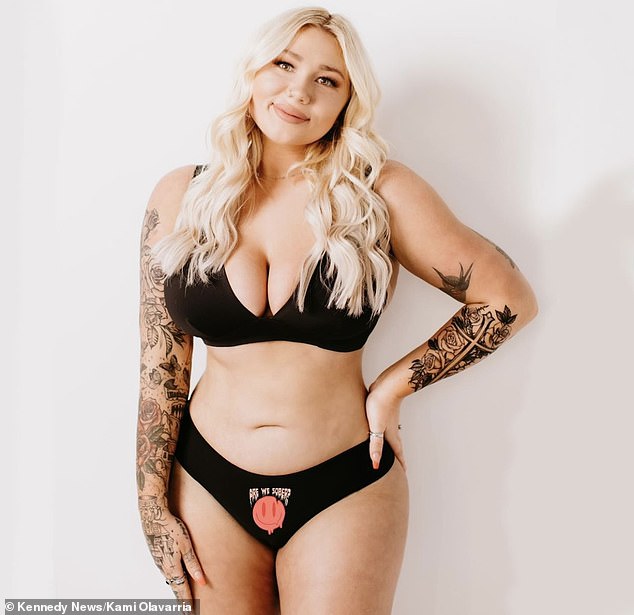 ‘When Daisy died, I was really struggling with it,’ Ella said.

‘I coped with her being gone by doing digital art and it sounds so stupid but I started drawing these little cat characters and I thought they’d look so cute on underwear.

‘There are so many different scenarios where sexual assault happens and a big portion happens within relationships.

‘I imagined so many different scenarios where someone would see them and be prompted to ask ‘what does your underwear mean?’

‘I’ve never had underwear with words on them. So many good things come out of this.

‘I was raped by two boys. What happened to me was more violent, they physically assaulted me, hit me and stuff, drugged me then assaulted me when I was unconscious. 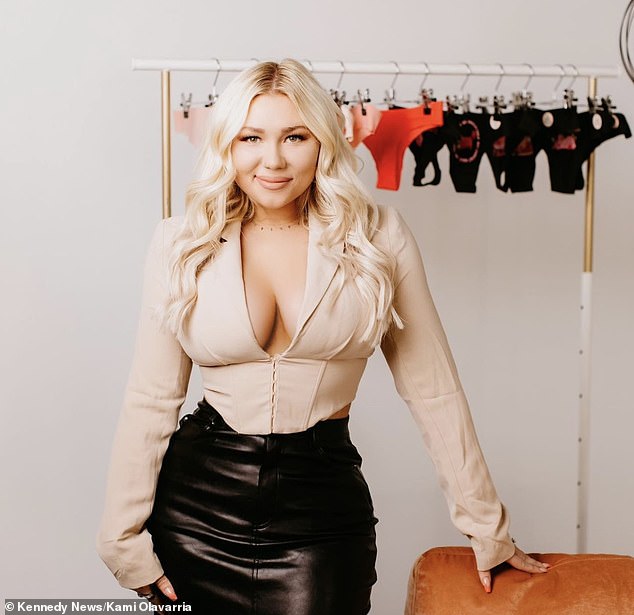 Ella said two boys physically assaulted, drugged and then assaulted her while she was unconscious at age 14

‘It didn’t just happen that night and go away, it was an ongoing thing at school. Everyone knew about it and would harass me in the halls.

‘I don’t think they think they did anything wrong. It was like I wasn’t even a human being. There was an investigation but I never got justice for what happened.

‘When I think back, when it was so fresh and I was 14, all the things you normally go through as a teen high school girl then add a super traumatising event to that. Everything feels like the end of the world.

‘I was struggling so hard with self-harm. I felt like it was so unfair.’ 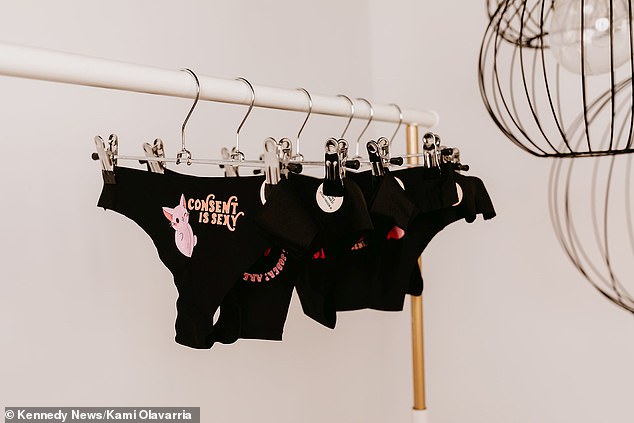 Ella claims she has been inundated with over 1,000 orders since launching Assk First, but has also received messages from people describing her ideas as ‘stupid’

Underwear designer Ella claims she has been inundated with more than 1,000 orders since launching last year.

Although the majority of the feedback has been positive, she says she’s received messages from people describing her idea as ‘stupid’.

Ella said: ‘I feel like I haven’t had something that’s unique to me and my personality.

‘Starting Assk first, I felt like I could be myself while continuing important work. I put my personality into all of the designs.

‘I’ve had so much good feedback and support behind it. That makes me feel awesome but I do get negative feedback but it’s all coming from people who don’t understand rape culture. 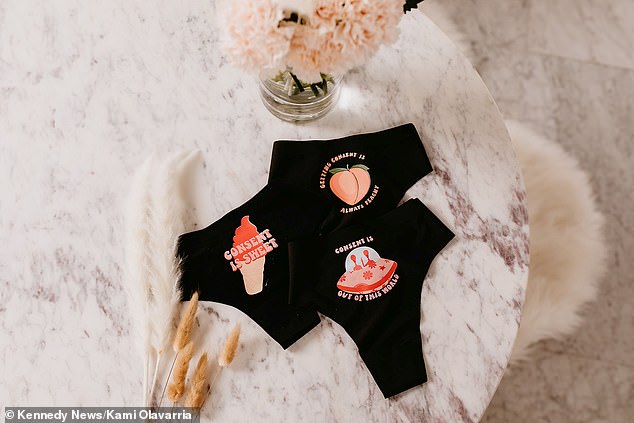 ‘I get comments from majority men saying it’s the stupidest idea and my underwear would never stop a rapist.

‘I thought that was such a weird response because you don’t look at someone wearing a cancer awareness shirt and say ‘your shirt isn’t going to stop cancer’. It’s such a stupid reaction.

‘Of course the underwear isn’t going to stop a rapist but the ideology that the only kind of rape in the world is the violent type that happens in a back alley, that’s what I want to dismantle. 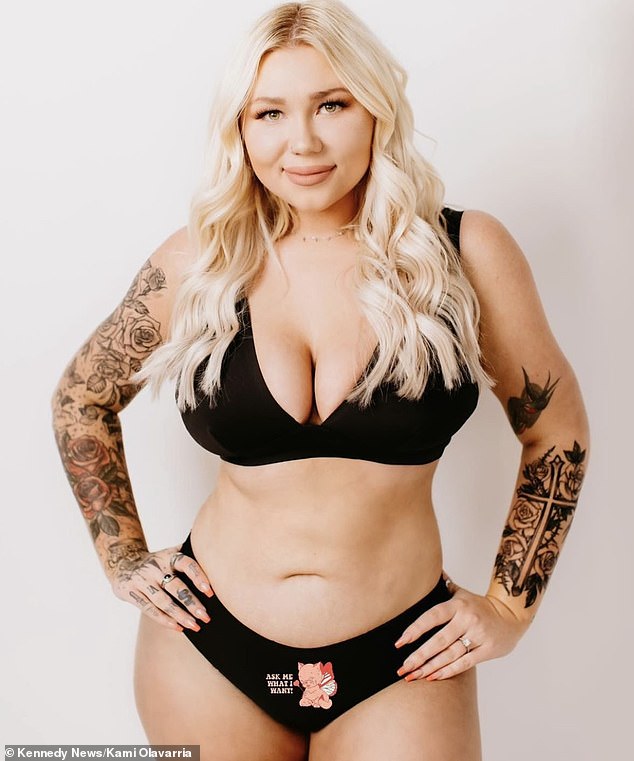 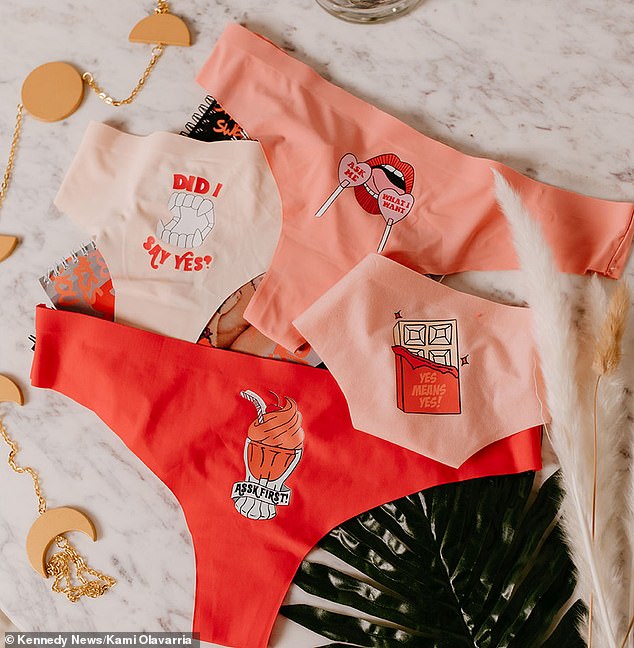 Ella said she never advertises that her products are meant to stop a predator, but they empower and spread awareness

‘When we’re talking about consent and sexual assault, we’re not talking about violent rapes that do happen but are a very small percentage. That’s the whole point of my brand.’

‘You’re contributing to rape culture by ignoring all of these other things that are happening.

‘I’ve got such good feedback on the quality and hearing from survivors and not survivors saying wearing them makes them feel safe.

‘If that makes someone feel empowered and safe, then that’s worth that for me.

‘I never advertise that they’re meant to stop a predator, but empower and spread awareness and start a conversation.’ 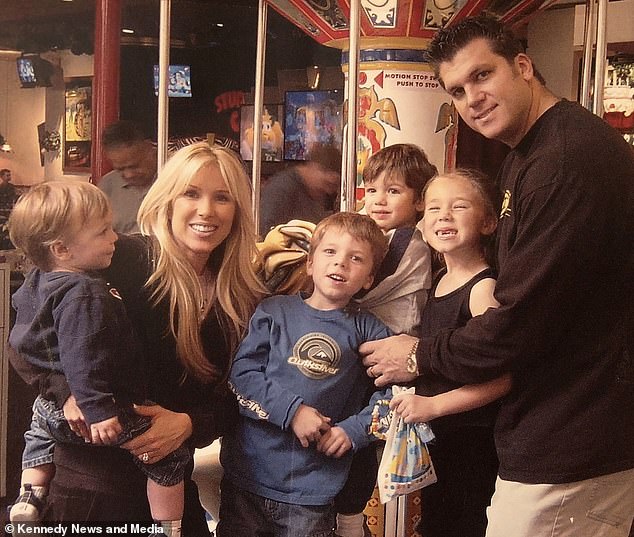 Ella didn’t tell her parents about the traumatic assault she experienced until six months after it happened. Pictured: Ella (second right) as a child with parents Holly and Patrick, her brothers Jack, Ford and Cole

Following the traumatic assault ten years ago, Ella admits she blamed herself and couldn’t bring herself to confide in her parents Holly and Patrick, both 52, until six months later.

The family were forced to move states and have been campaigning against sexual assault in high schools since with Ella co-founding organisation, SafeBae, which aims to educate middle and high school students.

Ella said: ‘I’ve been doing this work ever since I was assaulted.

‘When I started speaking publicly about it 10 years ago, people were not supportive.

‘This was before Me Too, they couldn’t believe this happened in high schools, they could barely come to terms with it happening in colleges. 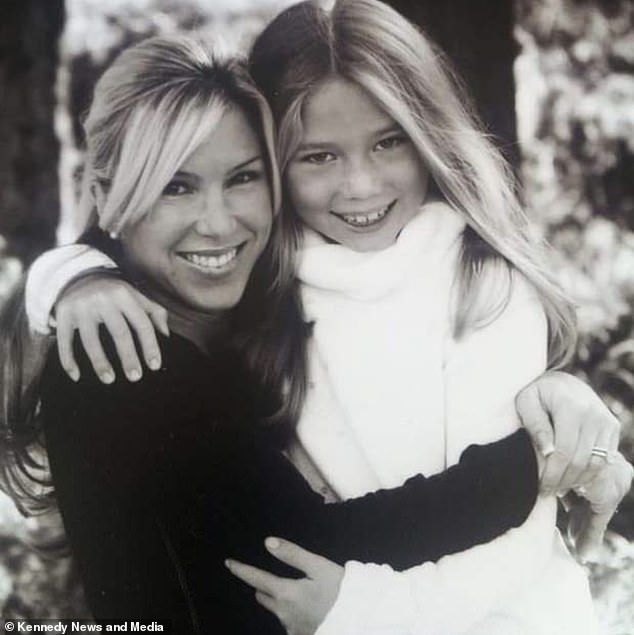 Ella’s family moved states and have been campaigning against sexual assault in high schools since. Pictured: Ella as a child with her mother Holly

‘After my parents knew they really made me understand that what had happened to me was really bad and a crime and I didn’t do anything wrong.

‘Right after it happened, in my 14-year-old mind, I thought I must have done something to deserve that happening to me.

‘I didn’t understand rape, I thought that just couldn’t happen to me. I grew up in a conservative home with a good family, you just don’t think that could happen.

‘I feel the need to speak so publicly because I didn’t feel like I had a choice.

‘I was sick and tired of people not knowing it happened to me and not understanding why I was struggling and that it was wrong. 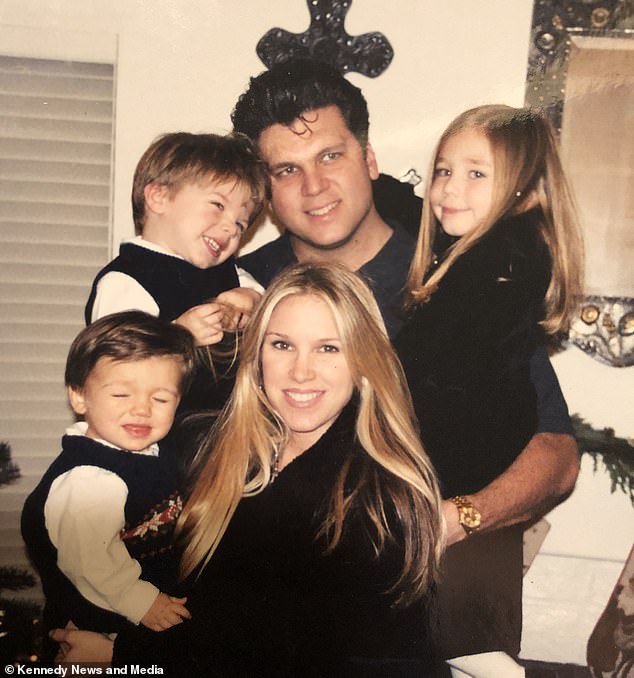 Ella said her parents helped her to realise what had happened was a crime and she didn’t do anything wrong to deserve it. Pictured: Ella with her family as a child

‘What happened to me was so wrong, educating people on it was important to me and it stemmed from there.

‘It started feeling like there was no other choice but to speak out about this. From the beginning I’ve said if I can stop this from happening to anyone else, it’s worth it for me.

‘I don’t think I’ll ever stop advocating for this, even for my kids, when I have kids I don’t want this to be a thing.’

Ella has recently launched a men’s line, including t-shirts and boxers so that younger brothers, Jack, 22, Ford, 21, and Cole, 19, can get involved in the campaign. 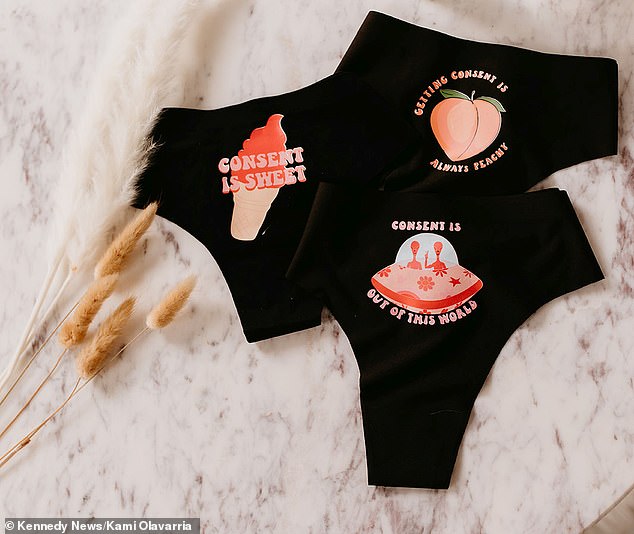 Ella said: ‘My parents have always been extremely supportive.

‘So many survivors don’t have that support which I think is why me and my family have taken it upon ourselves to all be engaged in this work and try to be supportive for people who don’t have that. I’m really lucky.

‘My brothers were really young when it happened to me so they’ve grown up seeing the aftermath and it’s rocked them to their core.

‘It’s like they’re traumatised too, seeing your sister get degraded, it affects them too.

‘They’ve been really strong advocates too. When I told them I was launching a men’s line they were harassing me every day asking when the boxers would be here and they could wear them. It’s really cute.’