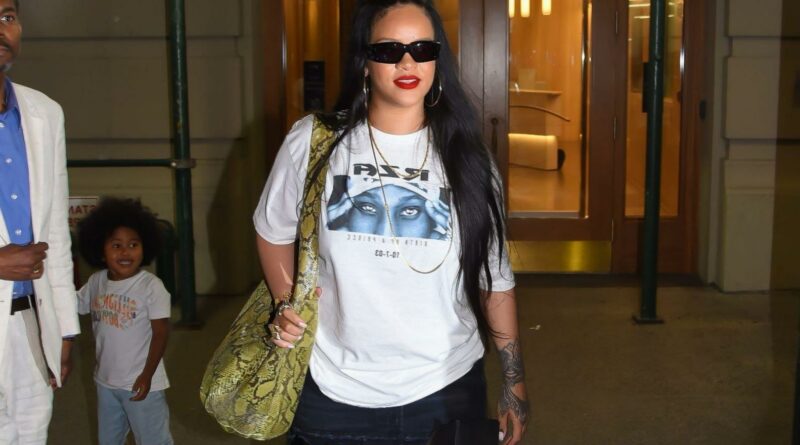 The discussion around Rihanna’s post-baby body is a reminder of how people will celebrate pregnant women’s bodies one minute and shame them the second the baby leaves the womb – and it’s a disheartening reality that needs to change.

Four months ago, I wrote a piece about Rihanna redefining maternity style. It was at a time when the star was seen wearing a range of show-stopping maternity looks during her pregnancy, from form-fitting and effortlessly cool outfits to extravagant and bump-baring looks that highlighted just why it’s so important to retain your own sense of style and not conform even when people may expect you to.

It was something I felt passionate about, both as a fan of the mogul and her ability to stay true to herself whatever the occasion, and as a celebration of pregnant people’s bodies in all their forms.

However, now that the discussion has shifted from a celebration of her style and pregnancy to criticism and commentary surrounding her post-partum figure, three months after the star has given birth, I find myself writing a totally different piece  – and it’s truly disheartening.

After giving birth to her and A$AP Rocky’s son in May, Rihanna has been seen all over the world – from Paris to New York – once again showcasing her iconic street style that we’ve come to know and love.

But instead of just gawking in awe at her beauty and presence (as we normally do), the discussion has become a tug-of-war between people sharing their unnecessary opinions on her body after giving birth and those understandably defending her right to look however she wants after going through the life-changing experience of pregnancy and childbirth.

The continued glorification of ‘snap-back’ culture – specifically, praising women who give birth and seemingly appear just as they did pre-pregnancy in a mere few weeks – is something that continues to affect society, as can be seen by the conversation surrounding Rihanna right now. It’s a reminder of just how much it’s embedded in people’s minds – especially those who feel comfortable enough to critique women who don’t look a particular way immediately after giving birth.

It’s a toxic aspect of our culture that will celebrate pregnant women’s bodies one minute and shame them the second the baby leaves the womb, leaving no room for people who’ve given birth to just be. After all, it’s not long after giving birth that many celebrities face the stress of maintaining Westernised beauty standards and are pressured to lose weight, tone up and take to Instagram to show everyone just how amazing they look a month or so afterwards.

The fact that it’s so prevalent in our society is disappointing yet not shocking – but many have taken to social media in defence of Rihanna and pregnant people everywhere to call out snap-back culture.

“Why is everyone pointing out Rihanna’s mom bod? That’s a REALISTIC postpartum body,” commented one. “Snap back culture is so toxic like y’all expect a woman to have a flat stomach after carrying a whole ass baby for 9 months.”

Another commented: “People on social media want to demean celebs for not meeting their ideals. I know y’all are not body shaming Rihanna for looking amazing, healthy & gorgeous postpartum”.

That people feel they need to take to social media to share how amazing Rihanna looks is understandable in a bid to combat the negativity out there – but it only adds to the frustrating cycle of commenting on women’s bodies as a whole.

It’s a tiring cycle that we know all too well as people praise, critique then praise women again for whatever transformation they go through regarding their bodies – and while it may not be as bad as it used to (tabloid culture really glorified ‘snap-back’ and weight loss culture to another level) we still have a long way to go.

Perhaps we can one day get to the stage where instead of making someone’s body a talking point, we can just let people be. Or simply highlight how good they look regardless of their figure.

It’s not a place we’re currently at (as seen by the conversations had online and me writing this article to discuss this issue) but it is something we can all bear in mind for the future.

I, for one, will continue to look on at Rihanna in awe for her talent, her business savvy and her fabulous looks as I always have, regardless of her body – I suggest others should do the same.