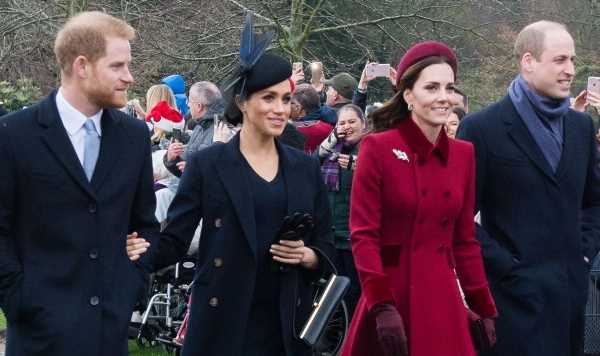 The royals always manage to keep their family’s Christmas traditions, with a fairly filled morning schedule on Christmas Day. They usually begin by gathering together for morning service at St. Mary Magdalene in Sandringham, a tradition dating back to the 16th century.

Because of this, there is no time for Prince George, nine, Princess Charlotte, seven, and Prince Louis, four, to open their presents on Christmas morning. Therefore, the royals open their Christmas presents the night before, on Christmas Eve.

On the Royal Family’s website, it states the following: “On Christmas Eve, The Royal Family lay out their presents on trestle tables and will exchange their gifts at teatime.”

According to royal expert Robert Jobson, it is actually a tradition that dates back to Victorian times. The royal expert and author of bestseller “Charles at Seventy”, told Express.co.uk the royal tradition of exchanging presents on Christmas Eve dates back to Queen Victoria.

This was because her husband Prince Albert reportedly insisted that they adopt the German tradition. “Royals have done it every year since,” Robert explained.

“On Christmas Eve when all the clan are together, the Queen’s grandchildren and great-grandchildren put the finishing touches to the 20ft Christmas tree in the White Drawing Room. Presents will be opened that day at teatime as the royals still keep to the German practice of opening their gifts on Christmas Eve.”

He continued: “Gifts are laid out in the Red Drawing Room on a white linen-covered trestle table, with cards marking exactly where the piles of gifts should be put. Once everyone has arrived, the royal guests enjoy a traditional Christmas that includes putting the finishing touches on the Christmas tree and the giving of cheap and humorous gifts.

“The monarch’s gifts are unlikely to be pricey,” Robert went on to explain.

“Touchingly for people who have everything, the royals tend to buy each other jokey things. A white leather loo suit was the star item one year.”

It is well known Kate once whipped up a batch of homemade chutney for the- late Queen – a gift that reportedly went down a storm among the royals.

In an interview last year for the ITV documentary, Our Queen at Ninety, the Duchess said: “I was worried what to give the Queen as her Christmas present.

“I was thinking, ‘Gosh, what should I give her?’ And I thought back to what would I give my own grandparents.

“And I thought, ‘I’ll make her something.’ Which could have gone horribly wrong. But I decided to make my granny’s recipe of chutney.

“I was slightly worried about it, but I noticed the next day that it was on the table.”

Kate first joined the royals at Sandringham for Christmas in 2011, after marrying Prince William in April of that year.

She described the late Queen’s gesture of putting the chutney on the table as showing the former monarch’s “thoughtfulness” and “her care in looking after everybody”.

Dinner at Sandringham on Christmas Eve is a formal affair, with the men wearing black tie suits and the woman wearing gowns, expensive jewellery, and tiaras. At 5pm on Christmas Eve, guests will usually enjoy tea, scones, sandwiches, and cakes from sideboards in the Saloon.

Carole Middleton, the Princess of Wales’ mother, has also shared some insight into how she typically spends the festive season.

Speaking to The Telegraph’s Stella Magazine, the 67-year-old said: “Generally, we go to church in the morning, then a walk, open a few presents (with more in the evening).

“Then champagne and smoked salmon for lunch, and the main Christmas meal in the evening – but with young grandchildren, maybe we’ll move that forward and have it at lunchtime.”