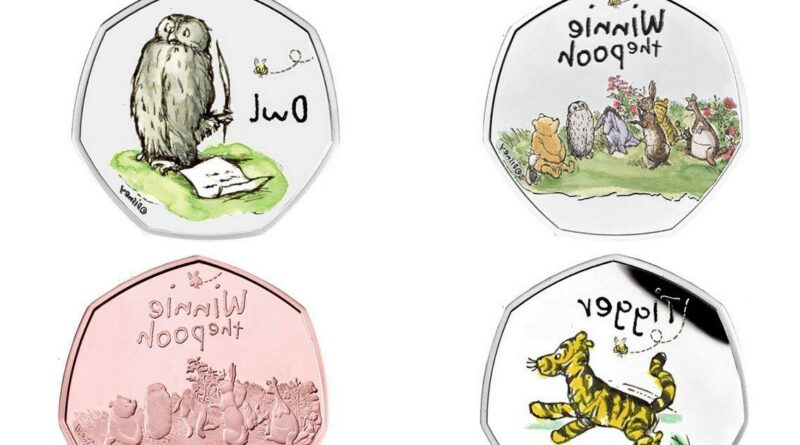 A new 50p coin in a collection to mark Winnie the Pooh and his Friends has been released.

The Royal Mint unveiled the next coin in the collection which also features Piglet, Owl, Eeyore, Rabbit, Tigger, Kanga and Roo.

It was designed to celebrate 95 years since the beloved bear first began his adventures.

Fans of the Winnie the Pooh collection can browse the coin options and purchase their very own on the Royal Mint website.

It is the fourth coin in the series, following last year's launch of the Winnie the Pooh, the Christopher Robin and the Piglet coins.

The Royal Mint launched the first new addition of 2021, but this will be followed by an Owl coin, and a Tigger coin later this year.

Its design is inspired by the original decorations of E.H. Shepard taken from A.A. Milne's classic tales, first published in 1926.

Thanks to this it's allowed for the brightly coloured brilliant uncirculated versions.

Daniel Thorne, a designer for Royal Mint, is the mastermind behind the nine-coin Winnie the Pooh series.

There will be a further three coins launched in 2022, but the designs are not yet known.

Clare Maclennan, The Royal Mint's divisional director of commemorative coin, said: "Winnie the Pooh is a treasured children's classic which, much like the popular hobby of coin collecting, has been passed down through generations."

Daniel Thorne, The Royal Mint's product designer for the Winnie the Pooh coins, said: "With each design, so much care and attention has been given to remastering the iconic decorations for the canvas of a coin while staying true to the texts people know and love."