Lord mayor Sally Capp has announced her leadership team for Melbourne Town Hall on the eve of nominations closing for next month's elections.

Mr Reece has worked as a lawyer, journalist and adviser to former prime minister Julia Gillard, before he was elected as a City of Melbourne councillor in 2016. 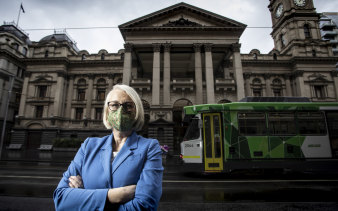 Cr Capp's top pick for councillor is the well-connected Kevin Louey, who has previously served as former lord mayor John So's chief of staff and was elected as a councillor in 2008 on Labor Unity member Peter McMullin's ticket, and on former Liberal opposition leader and lord mayor Robert Doyle's ticket in 2012.

Other candidates on Cr Capp's team include barrister Roshena Campbell, who has provided pro bono legal services for asylum seekers and homeless people for more than a decade.

Rounding out the ticket are architect and artist Tania Davidge, who campaigned against Apple setting up a store in Federation Square, Cherry Bar owner James Young, and public policy expert and non-profit organisation founder Tina Kuek.

"I am very proud to be leading a team of experienced and passionate people who want to work with me to lead Melbourne out of the economic devastation caused by the COVID pandemic and into a brighter future," Cr Capp said in a statement.

"The team represents the breadth of the talent, diversity and character of our great city."

Town Hall observers have conducted modelling that shows Cr Capp's vote at 30-32 per cent, which would give her enough to have her first three candidates for councillors elected, giving her a slight five out of 11 minority on council.

Mr Doyle's former second-in-charge, deputy lord mayor Arron Wood, is running against Cr Capp for the top job, and is considered a strong contender. He has named company founder and director Lisa Teh his pick for deputy.

Businesswoman and ALP member Jennifer Yang, who fell just short of beating Cr Capp with 46.95 per cent of the vote after preferences in 2018, will run again for the top job and has named Sandra Gee, who runs Alpaca Connection in the Block Arcade, as her deputy.

Academic and unionist Apsara Sabaratnam is the Greens candidate for Town Hall, with health worker Roxane Ingleton running as her deputy.