SARAH VINE: Dogs talk to humans through gestures and behaviour that are intended to get a specific response and also have specific meanings

You may think the slobbering heap of canine fur lying at your feet isn’t exactly the Einstein of the animal kingdom.

But then consider the fact that most dog owners like me clear up after our dogs in the park, take them for walks, groom them, feed them, keep them pest-free, and pay the vet’s bills. Which should really make you ask yourself: who’s the dumb one in the relationship?

Could it be that far from being simple, slightly soppy creatures, dogs are, in fact, cunning and, some might say, highly manipulative?

Mention the word ‘manipulative’ to Hannah Worsley in the context of dogs and she chuckles. ‘Are dogs as clever as apes? No; but they are very attentive animals, and good learners. They have learned that they can manipulate humans — and developed the skills to do so.’ 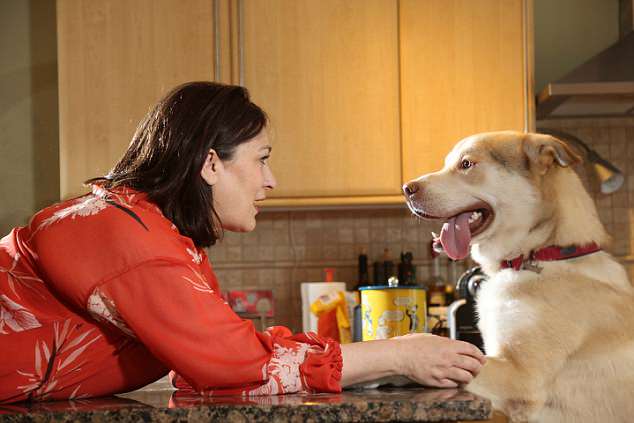 Hannah is sitting in my kitchen alongside her colleague, Sean O’Hara. The pair are researchers from Salford University who’ve made it their business to work out not only what makes dogs tick, but what they are actually thinking. Last week they published a paper which created quite a stir.

In essence, they’ve gathered evidence proving that common doggy behaviour towards humans — raising a paw, rolling over, resting a chin and so on — actually constitutes a phenomenon rarely observed even in primates: cross-species communication.

In other words, dogs talk to humans through gestures and behaviour that are not only intended to get a specific response, but also have specific meanings. Think of it as a kind of canine sign language, only with the main topics of conversation being stick-throwing and chicken treats.

Of course, it will come as no surprise to your average dog owner than Fido has no trouble getting his message across when he wants to. One of my own dogs, Snowy, will bang his bowl against the kitchen floor when he’s hungry, for example. But what’s different about this study is the extent to which it identifies certain gestures common in all dogs, giving rise to the notion of a canine lexicon devised purely for communicating with humans.

Of the two dogs in our house, Snowy and Muffin — a bichon frise and a lhasa apso cross — Snowy in particular is adept at making his needs understood, whether it’s by loudly demanding food, or expressing his displeasure and/or anxiety by leaving the occasional not-so-fragrant present on the bathroom mat.

Meanwhile, Muffin, a creature so adorably thick one sometimes has to wonder whether there is anything but fur between those dear ears of hers, does nevertheless have a very engaging habit of ‘talking’ to me in a sort of low but very friendly growl when she wants to get my intention.

And I now realise that, far from being the dopey one, she is, in fact, the most eloquent of the two.

She regularly exhibits a number of the gestures identified in the new study, including lifting herself up on her hind legs without resting her paws on anything, assiduously licking me and rolling over to expose her chest and stomach. This she tends to do when I walk into a room where she is sleeping, and I know exactly what it means: love me. And I do. 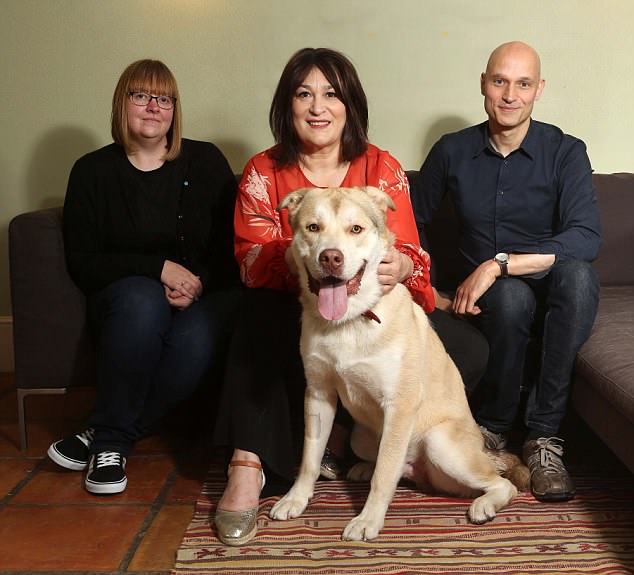 Snowy, by contrast, is far less sophisticated. He just barks, which simply annoys me. This, apparently, is because he is a rescue dog from a puppy farm, and therefore was never shown the basics by his mother.

To me, this makes perfect sense. I can now see that, unlike Muffin, Snowy is pretty monosyllabic in the way he interacts with me. And it makes a difference. Muffin’s behaviour elicits a far more positive result from me than Snowy’s.

In scientific parlance, the gestures dogs display are known as ‘referential’. That’s to say, behaviour that is intentionally used to draw attention towards something, including objects (a ball stuck under a chair) or events (a pressing need to go for a walk).

In simple terms, referential gestures are neither instinctive nor automatic from birth, but display the kind of cognition rarely observed in the animal kingdom.

Nor are they used to communicate with other members of their own species: we are the targets. The fact that these researchers have been able to identify so many unequivocal examples of this behaviour — 19 in total, which may not sound like much in human terms, but which in dog terms is hugely significant — not only points to the existence of an established ‘language’ in dogs, but also to a step-change in the way we think about our relationships with these extraordinary animals.

For years the consensus about dogs has been that they are, like their wolf ancestors, pack animals, endlessly striving to achieve alpha status within their group. But, as Sean O’Hara explains, that notion was based on studies of dogs that were kept in packs in artificial laboratory conditions.

Since dogs have evolved to live individually or in small groups alongside humans, this was always going to lead to a highly stressful, confrontational environment — in itself leading to domineering pack behaviour.

This new study, however, enlisted volunteers to record data about dogs in their usual habitat, i.e. at home (or, in the case of my two hounds, the sofa).

Under these conditions, the notion of the ‘pack’ animal goes out the window. Turns out dogs don’t want to dominate their owners. They want to manipulate them. And the degree to which they have learned to do this is, it turns out, astonishing. 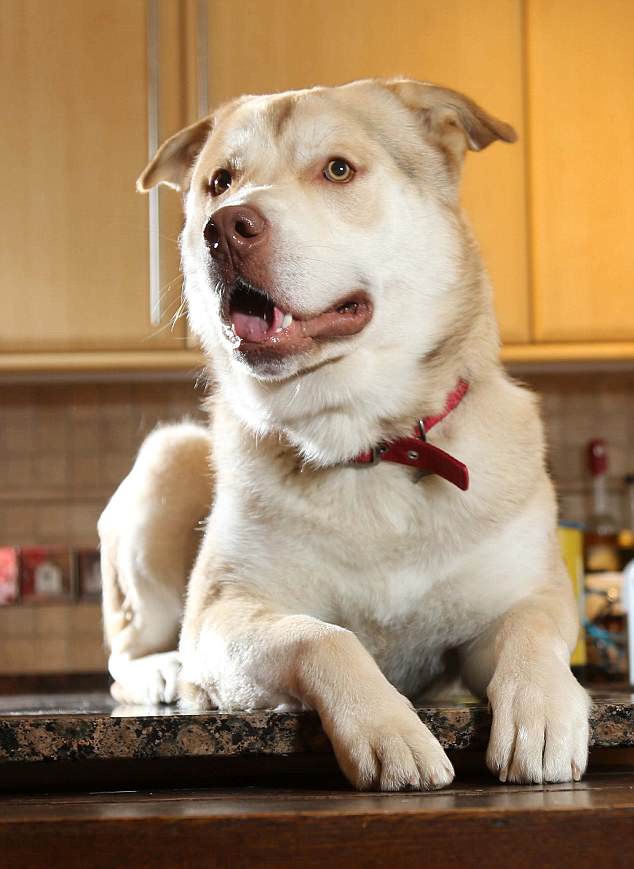 In fact, when you stop to think about it, it would seem that the sole objective of dogs over the past however many thousands of years of human co-habitation has been to make us their willing slaves — while maintaining the illusion that we are the boss.

Even if that’s the intention of Snowy and Muffin, neither is exactly PhD (or should that be PhDog?) material. Which is why, for the purposes of this experiment, I’ve decided to enlist another hound of my acquaintance, who was recently adopted from a nearby rescue centre.

His name is Albi. He was found abandoned on a roadside, an act as unconscionable as it is cruel. According to The Mayhew rescue centre, he is a cross between a husky and a mastiff, a year old.

To describe Albi as big and boisterous would be a hopeless understatement. He is 5ft 6in on his hind legs. But despite his imposing size, he is as gentle as a lamb. He is also handsome as hell, with beautiful amber eyes and a noble profile. And he is clever.

He is also, it turns out, a smooth talker, exhibiting a rich vocabulary of gestures. He’s a ‘chomper’ (placing my arm in his mouth and biting down very gently) — which means he wants me to play with him; and a pawer (he lifts his paw and puts it on my wrist while gazing wistfully into the middle distance), which signifies that he wants me to get his toy.

He also flicks his toy teddy at me and rests his head on my feet and, yes, rolls over on his back for a tickle at every opportunity.

He is, it’s fair to say, a real charmer which is, explains Hannah, the whole point. If Albi wanted to, he could have my arm off. But that’s not what motivates him. Albi’s primary objective in life is the same as any dog’s: to get his way by communicating with his human companion.

So it is that during the course of our time together he encourages me to ‘Scratch me or pet me’, ‘Give me food/drink,’ ‘Take me out’, and ‘Get my toy/ball’.

Observing Albi’s behaviour also makes me realise something very important about dogs. When it comes to things like training and behaviour, actions — to a dog — speak much louder than words.

Hannah gives the perfect demonstration of this when, after two hours of being poked and prodded and made to sit for the camera, Albi gets bored and boisterous.

He starts to gnaw gently at me, then jumps up. My natural reaction is to give him a verbal telling-off: ‘No, Albi, no.’

But Worsley suggests another tactic: breaking eye contact, turning away from him and making myself small. Immediately, he realises it’s upsetting me — and he stops.

It’s a real eye-opener. Now that we are talking the same language, both of us feel much happier in each other’s company. It’s not perfect: he doesn’t speak English, I only have rudimentary dog and, conversationally, it’s fairly limited.

Certainly, I think it’s going to take a few more evolutionary cycles before humans and dogs can debate the implications of, say, Brexit. But we have the basics. And for the rest, there’s always treats.