Scarlett Johansson caused quite the style stir at this year’s Met Gala when she stepped onto the red carpet wearing a Marchesa design – becoming the first star to wear a design by the embattled label since numerous reports of sexual abuse were made against Harvey Weinstein, the former husband of co-founder Georgina Chapman.

Once a red carpet favorite, Marchesa’s fall from grace was phenomenally quick, happening almost immediately after the allegations against Weinstein were made in October 2017; no stars have worn the labels designs at a red carpet event since then – until 33-year-old Scarlett’s Met Gala appearance.

The Avengers actress didn’t appear to pay much mind to the theme of this year’s event – Heavenly Bodies: Fashion & The Catholic Imagination – when picking her dress, a form-flattering burgundy and pink design with several floral embellishments around the neckline and waist. 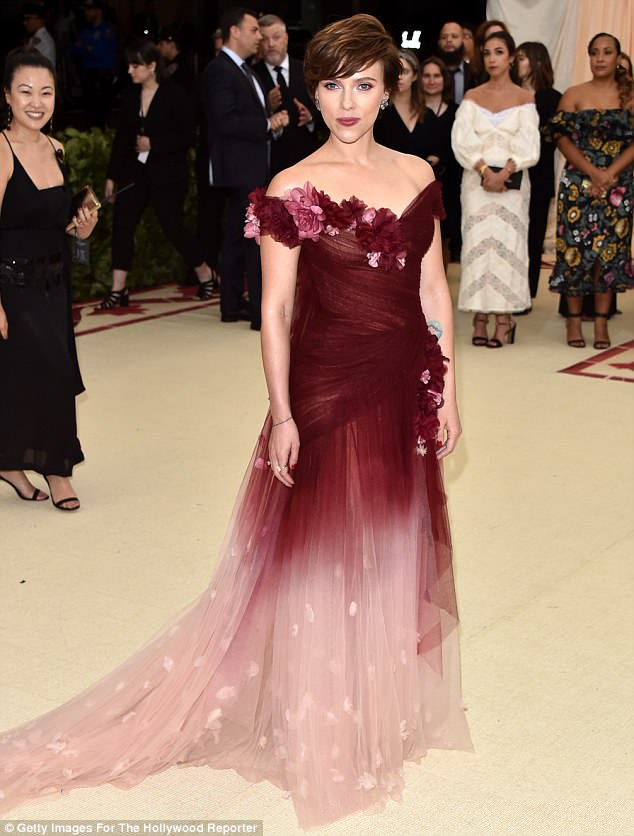 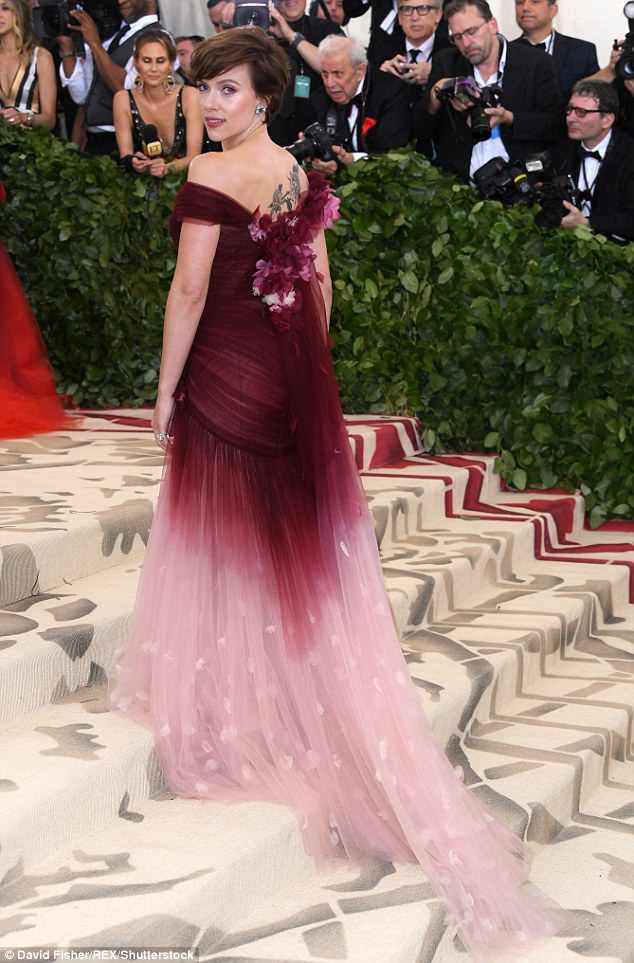 Concern: The 33-year-old actress, who has previously come under fire for supporting alleged abusers, donned a floral-embellished burgundy and pink design for the black tie event 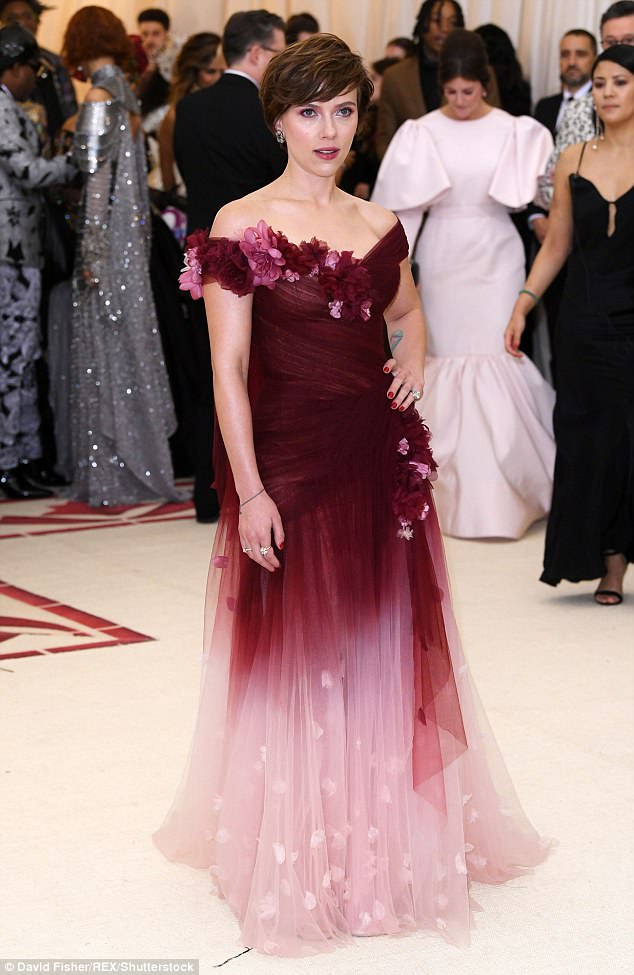 Making a statement: The Avengers star came under criticism online for her decision to wear a Marchesa design, with many suggesting this was a sign she was supporting Weinstein 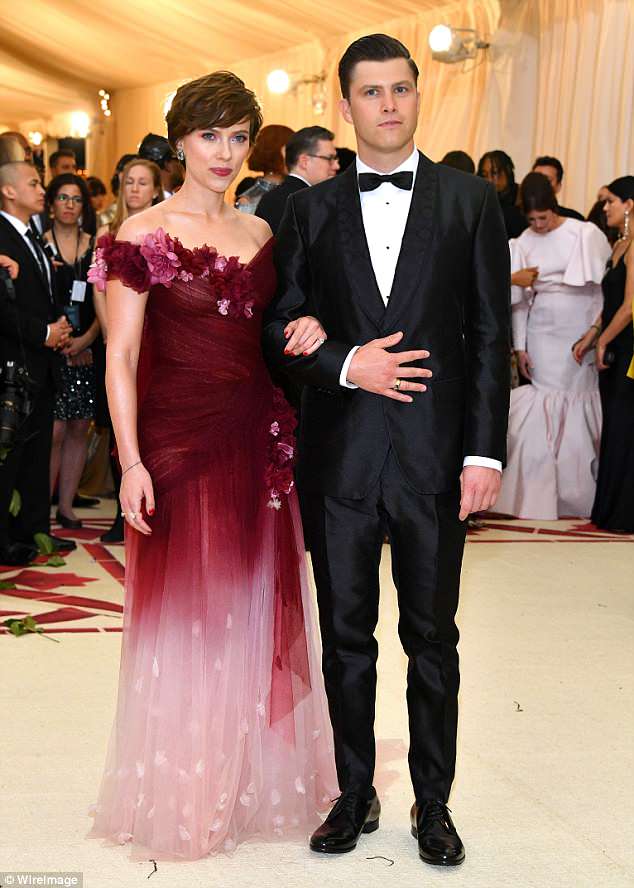 Right-hand man: Scarlett appeared on the red carpet with her SNL writer boyfriend Colin Jost, and neither seemed particularly upset by the scandal

The ombre style tulle dress faded from a deep blood red into a pale pink down the train, with several floral petals scattered across the skirt.

But while the off-the-shoulder design may have been flattering on Scarlett’s figure, her decision to don a dress with such a controversial background prompted some less than positive feedback online.

Social media users were quick to hit out at her choice of dress design, many questioning why she had chosen to show support for a fashion label that was so closely connected with the Weinstein scandal.

‘Scarlett Johansson in Marchesa. That designer choice was definitely risky,’ one person wrote on Twitter, while another chimed in: ‘She’s reeeeally not the person I would have thought would break the Marchesa strike. Seems very off-message for her.’

Some were less subtle in their criticism, however.

Another simply noted: ‘Scar Jo wearing Marchesa… Even when he’s not here, Weinstein is still here.’

Scarlett’s choice of design label is all the more interesting given that she professes to be an avid supporter of the Time’s Up movement, which was created in response to the mounting number of allegations of abuse and harassment within the entertainment industry.

However, Scarlett who has known Weinstein for years, and starred in his 2008 movie Vicky Cristina Barcelona, has been repeatedly criticized for her failure to speak out against the mogul and his alleged crimes.

Writing in a magazine in February, a few months after the Weinstein scandal first broke, she said fighting for equality is ‘an uphill battle’ and that among her female friends and family, ‘everyone has been discriminated against or harassed – sexism is real’.

She failed to specifically address – or condemn – Weinstein’s behavior, however. 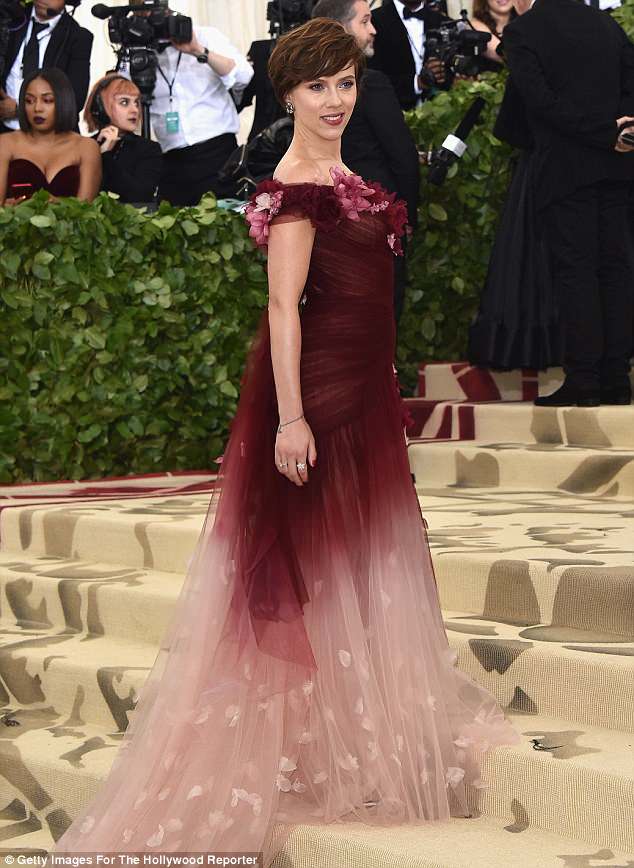 Turning point? It is the first time that a Marchesa design has been worn on the red carpet since news first broke of the allegations against Weinstein in October 2017

Floral: As well as few flowers at the neckline, the dress also featured a petal design across the tulle skirt 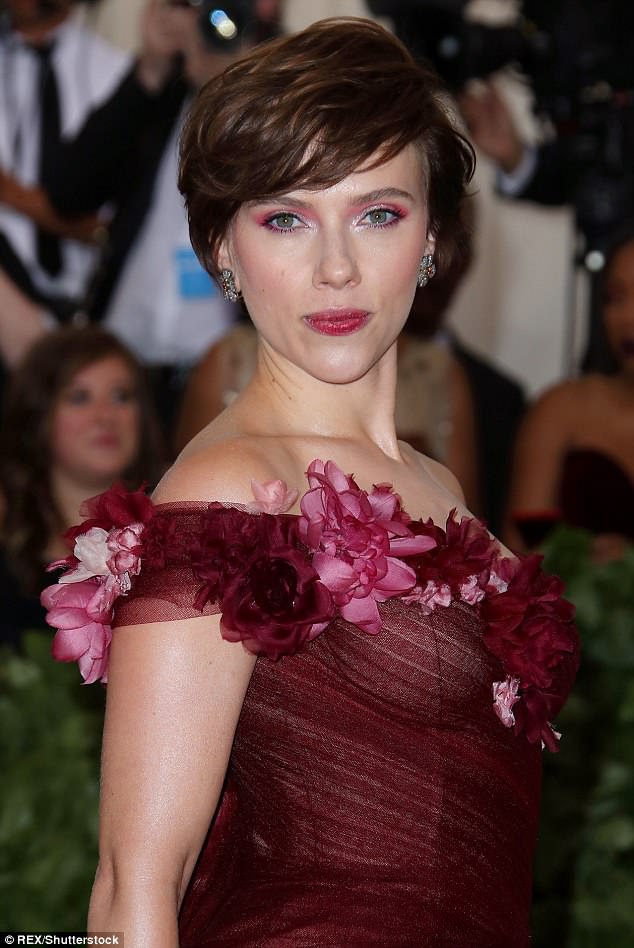 Something different: Scarlett showed off a short brunette hairstyle at the event, where she also chose to match her make-up to the colors of the dress

The starlet, who appeared on the red carpet with her SNL writer boyfriend Colin Jost, also made headlines in January of this year when she took to the stage at the Women’s March in Los Angeles to blast an unnamed man – later confirmed to be James France – for ‘preying on people who have no power’.

She ended her speech by saying: ‘I want my pin back, by the way,’ making a thinly-veiled reference to the fact that Franco was pictured wearing a Time’s Up pin just weeks earlier at the Golden Globes.

Scarlett’s show of support for Marchesa on Monday night is not the first time she has come under fire for standing by an accused abuser.

Following her impassioned speech at the Women’s March, the actress found herself being slammed online over her defense of director Woody Allen, shortly after he was accused of child abuse by his own daughter.

A month after Allen’s estranged child Dylan Farrow penned an open letter accusing him of sexual abuse in 2014, Johansson, who has starred in three of the director’s movies, told the Guardian: ‘It’s not like this is somebody that’s been prosecuted and found guilty of something, and you can then go, “I don’t support this lifestyle or whatever.”

She added: ‘I don’t know anything about it. It would be ridiculous for me to make any kind of assumption one way or the other.’

The actress even lashed out at Farrow for pointing a finger at actresses, including Johansson, who have appeared in Allen’s films.

‘I think it’s irresponsible to take a bunch of actors that will have a Google alert on and to suddenly throw their name into a situation that none of us could possibly knowingly comment on. That just feels irresponsible to me,’ Johansson said in the 2014 interview.

Scarlett had previously lavished praise on the director, saying of him in 2007: ‘I’d sew the hems of his pants if he asked me to’. 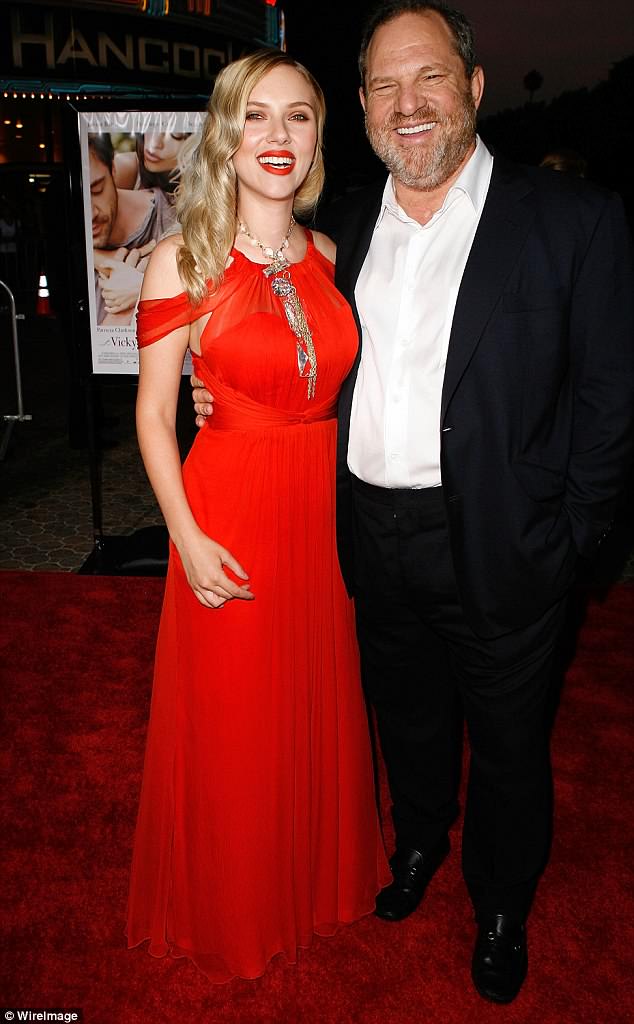 Under fire: Scarlett, who starred in Weinstein’s 2008 movie Vicky Christina Barcelona, was one of several actresses blasted for failing to condemn his actions (pictured together in 2008) 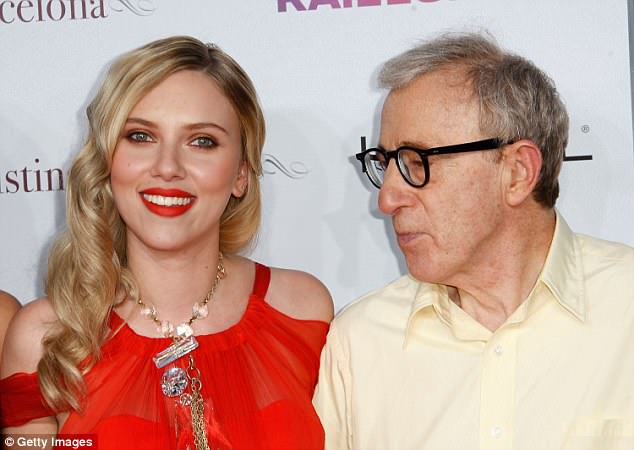 Fury: The actress has also been criticized for defending director Woody Allen against serious accusations of child abuse made by his own estranged daughter (pictured together in 2008) 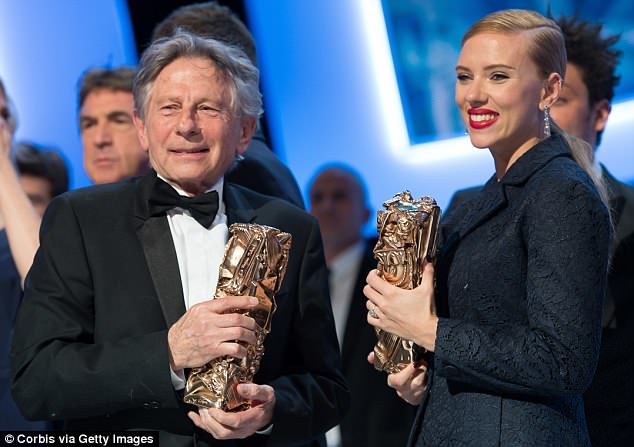 Another one: She also faced bitter outcry in 2014 when she was seen affectionately interacting with convicted child rapist Roman Polanski at the Cesar Film Awards 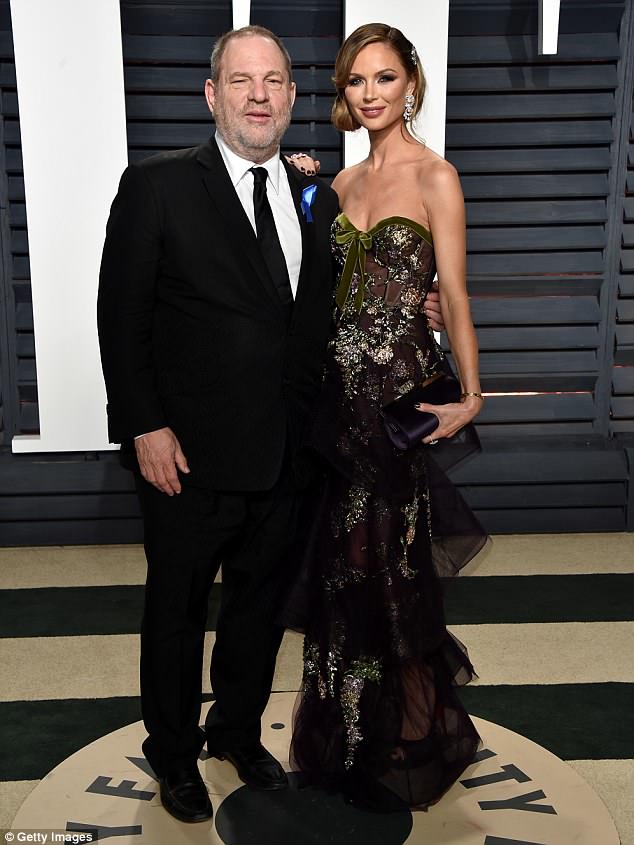 Downfall: Marchesa was founded by Weinstein’s former wife Georgina Chapman the year they met – and funded by the multi-millionaire mogul for years

Her behavior at the Cesar Film Awards that same year was also called into question when she appeared onstage alongside convicted child rapist Roman Polanski. There, she was seen putting an affectionate hand on his shoulder while smiling at him and whispering in his ear.

But while it may well be mired in controversy, Scarlett’s choice to wear a Marchesa gown will no doubt come as a welcome treat for Weinstein’s former wife Georgina Chapman, and her business partner Keren Craig, who have both seen their business fall to pieces since it became embroiled in the bitter abuse scandal.

Marchesa was founded in 2004, the same year Georgina and Weinstein met, and was funded by the multi-millionaire movie mogul, enjoying instant success, thanks to a handful of actresses who boosted its profile by wearing some of its earliest gowns to premieres and events.

However in October 2017, Felicity Huffman confirmed that Weinstein threatened to pull publicity funding for her 2005 film Transamerica if she didn’t wear his wife’s gowns on the red carpet.

Amid mounting allegations of Weinstein’s sexual harassment and sexual assault, The Hollywood Reporter wrote that he threatened to sabotage the careers of A-list stars, including Huffman’s, if they didn’t wear Marchesa.

The actress obliged Weinstein’s demands by wearing a flowing white Marchesa gown for her high-profile appearance at the Golden Globes where she was nominated for both her film and her role on Desperate Housewives.

Even before the Weinstein scandal over rape and sexual harassment allegations broke, Georgina faced the accusations that the label was only successful thanks to her husband’s Hollywood connections.

‘He was the mastermind behind Marchesa — orchestrating deals and using his influence in terms of the celebrity connections for her on behalf of the brand,’ one Los Angeles publicist told The Hollywood Reporter.

The publicist noted that Weinstein and Chapman had an understanding that ‘they both benefited from the relationship,’ adding that ‘she certainly knew about his bad behavior.’

Another publicist recalled that Sienna Miller was told Harvey ‘would be very upset if she didn’t wear Marchesa’ when invited to sit at Harvey’s table at the Golden Globes in 2007 after starring in the Weinstein-produced Factory Girl.