The trouble-making class of 2018! Twitter users share the best high school senior pranks of the year, from covering the principal’s office in tinfoil to selling the school on CRAIGSLIST

Some high school seniors said goodbye to their childhoods in the most disruptive ways possible this year — by pulling off some seriously over-the-top senior pranks.

While some students opted for milder jokes, such as plastic cling-wrapping a campus golf cart to an outdoor pole, others took it a step further — like the kids from Chaparral High School in Scottsdale, Arizona, who actually put their school up for sale on Craigslist.

Perhaps one of the best pranks of the year, though, was when four students from Cumberland High School in Wisconsin staged an elaborate scene that actually fooled people into thinking a car had crashed into their principal’s office.

Using black tape against the outside of the brick wall to make it look like a ‘gaping hole,’ one student bought a beat-up old used car for $200 and placed it against the hole with a tow truck the night before.

Others decked out the halls with balloons, tin foil, and caution tape,and have been rewarded for their efforts on Twitter with thousands of likes and retweets. 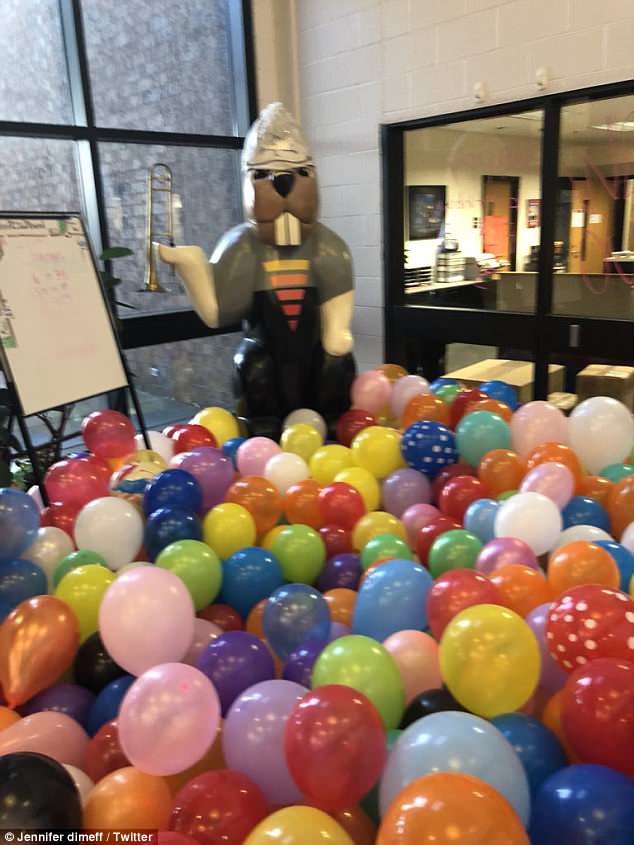 Circus: These students blew up thousands of balloons and put them in all of the hallways of their school, making it hard for anyone to walk 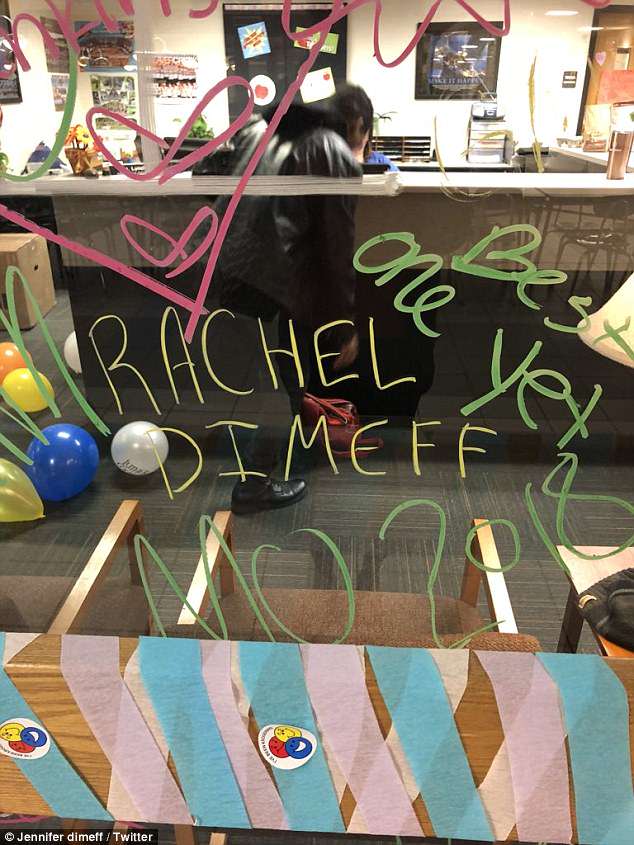 Tough: The seniors from Beavercreek High School in Ohio also drew all over the glass windows of their school with colourful markers 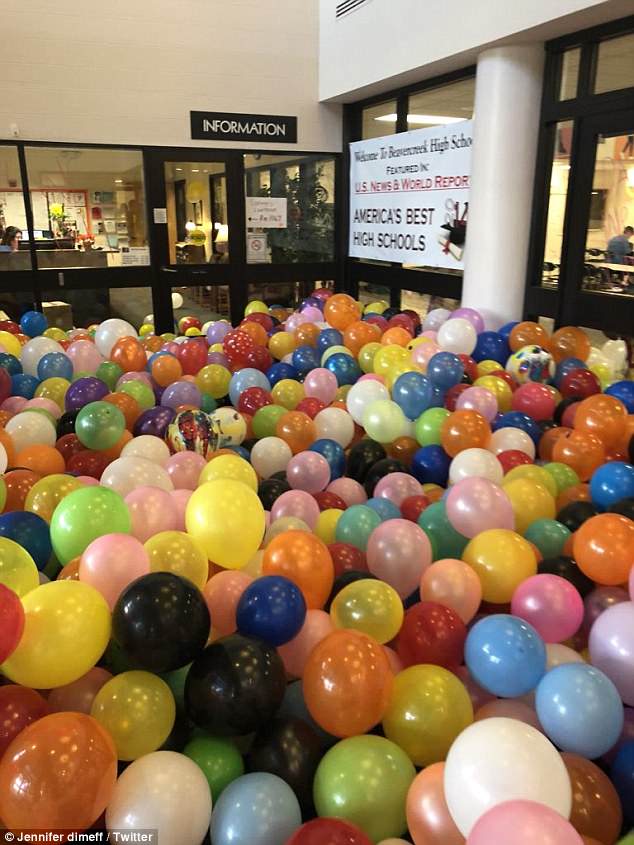 Viral: Jennifer Dimeff, the mother of senior Rachel, posted the photos on Twitter 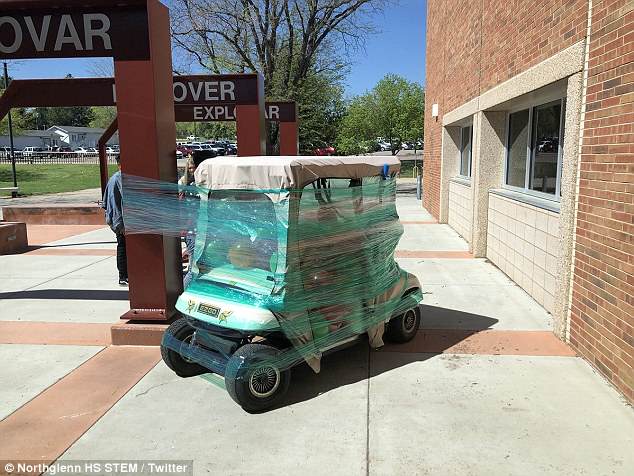 Not moving: Students at Northglenn Stem in Colorado wrapped a golf cart from campus to an outdoor pole with cling wrap, so that no one could drive it 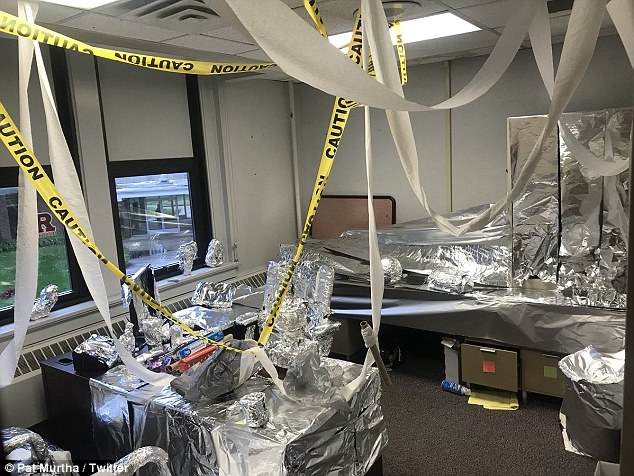 Wrapped up: Pat Murtha, the assistant principal of Rossford High School in Ohio, arrived to his office to find it covered in caution tape and toilet paper 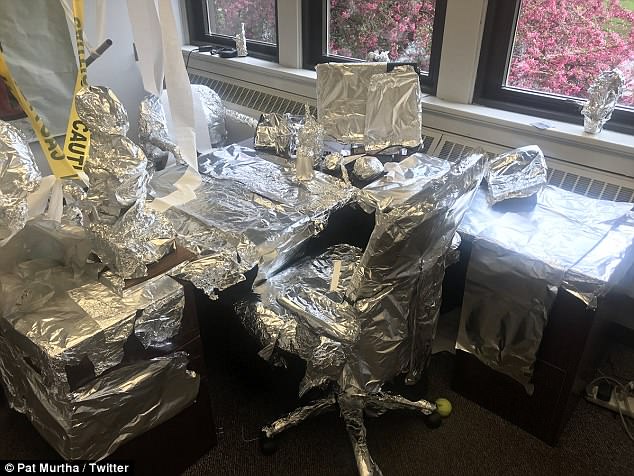 Foiled: Everything in his office, from his computer to his desk and chair, was covered in tin foil 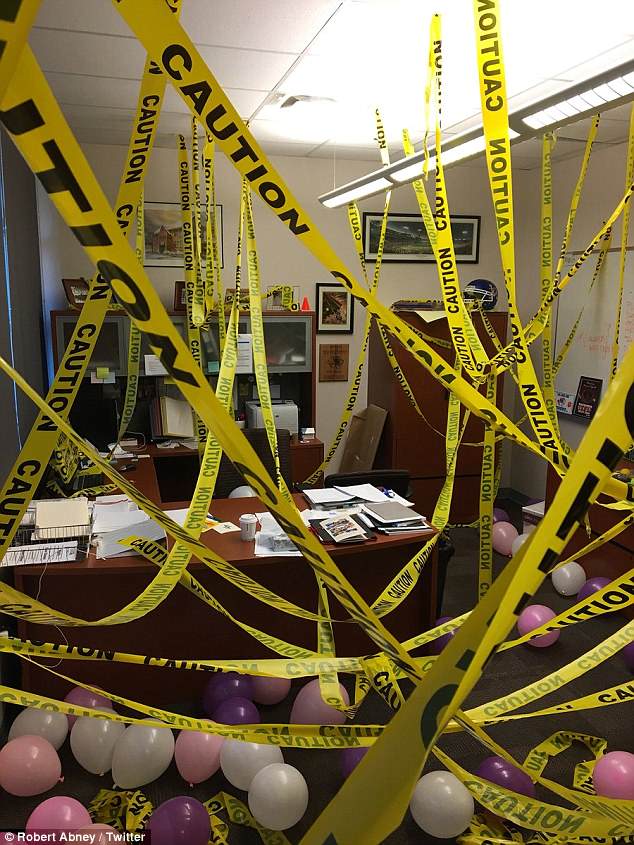 Caution! Robert Abney, the principal of Los Lunas High School in New Mexico, shared a photo of his office after his seniors completely covered it in caution tape 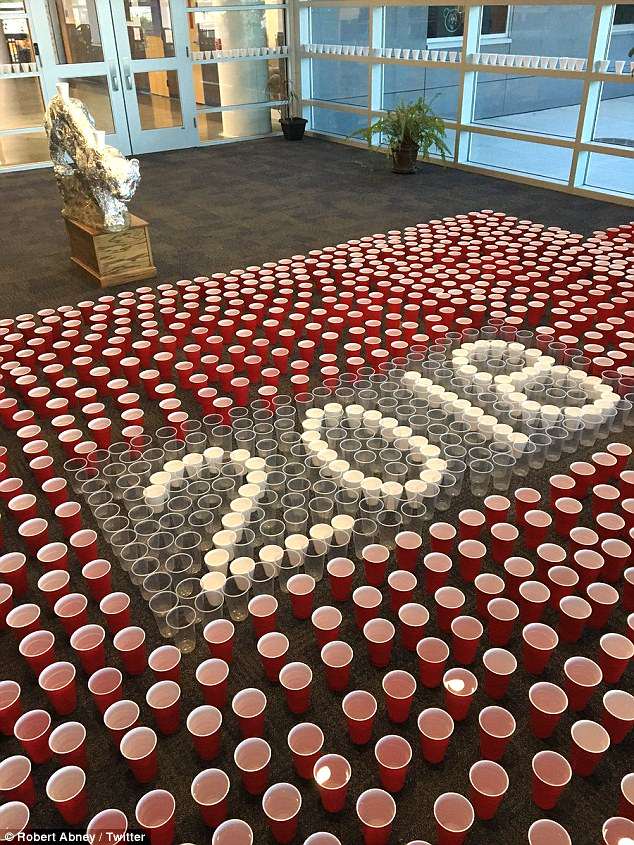 Beer pong: His students also covered the floor of the main lobby in red Solo cups, spelling out 2018. He captioned the picture with good humor, writing, ‘My seniors got us good today’ 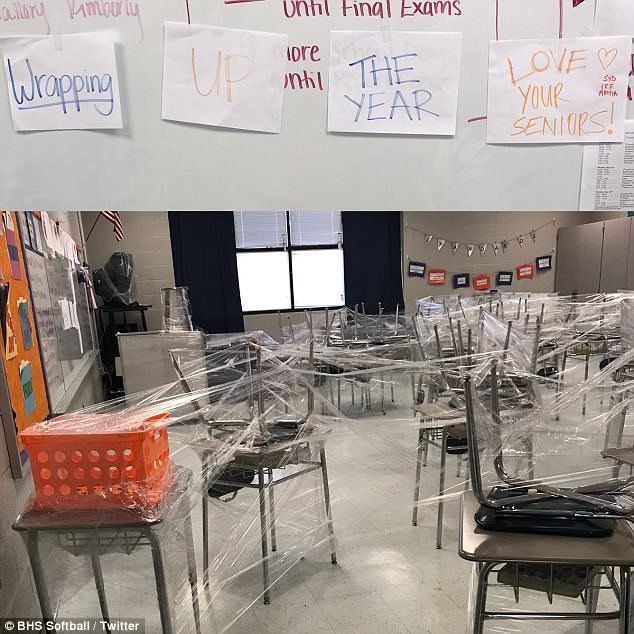 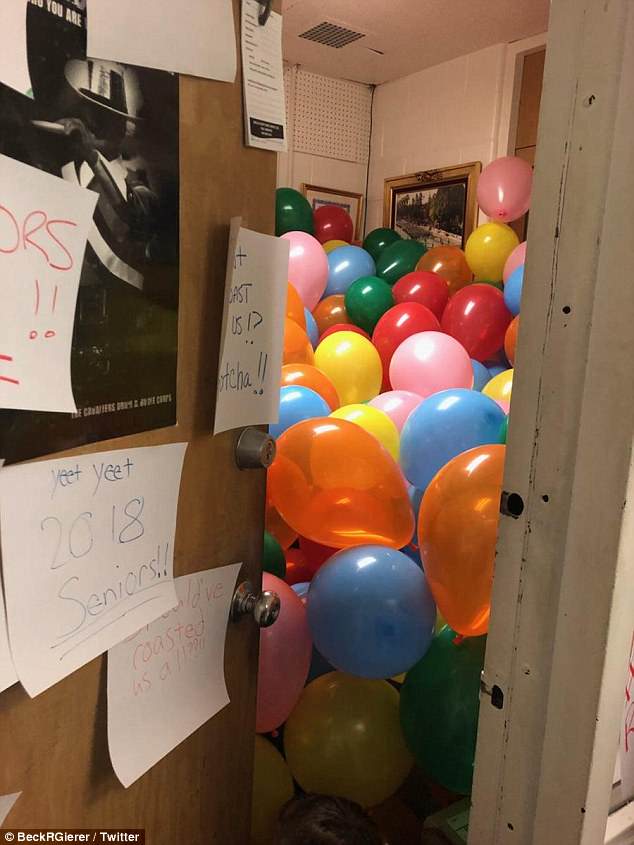 Surprise: The students at Jefferson City High School in Missouri blew up hundreds of balloons and shoved them into their band teacher’s tiny office so that he couldn’t open his door 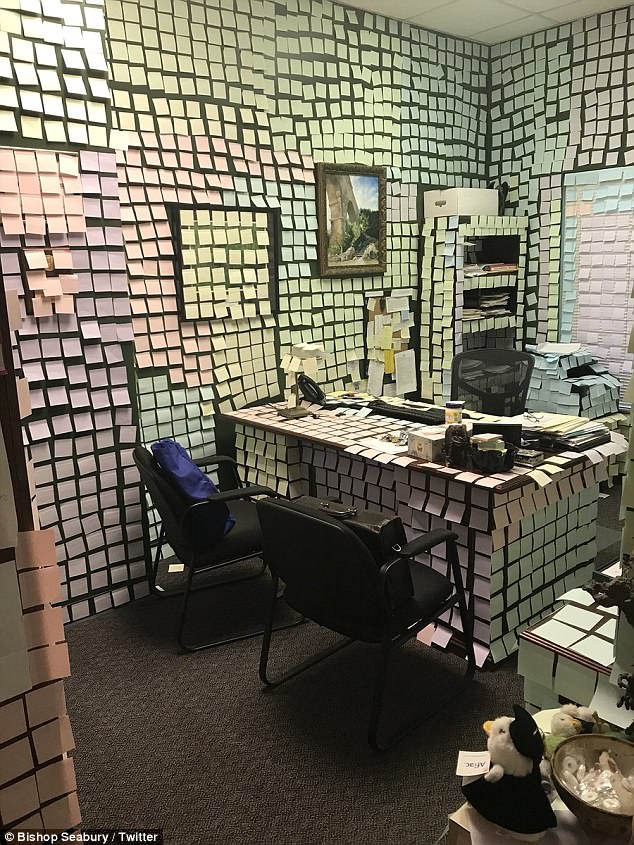 Stick it: The principal of Seabury Academy in Kansas was in for quite a surprise when every inch of his office was completely covered in colourful pastel Post-its 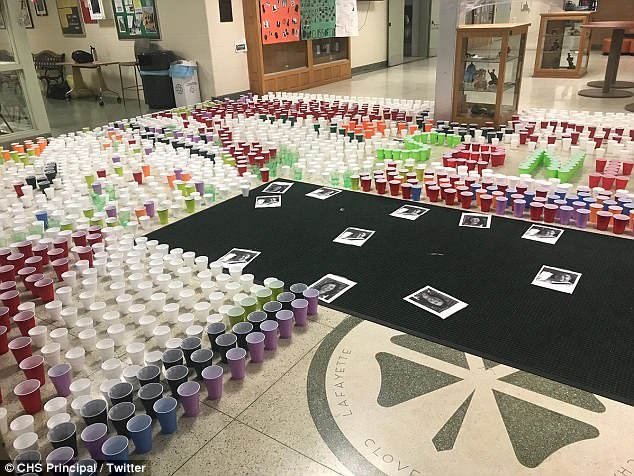 Organized: At Cloverleaf High School in Ohio, the students pulled a prank that involved thousands of cups on the floor to spell out ‘seniors’ which the principal said was ‘impressive’ 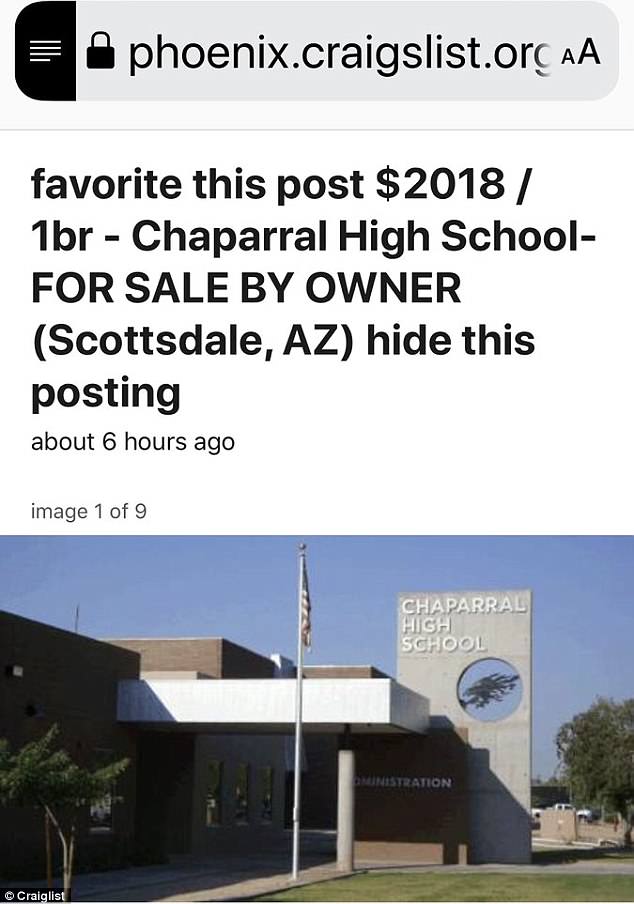 Sale: Students of Chaparral High School in Arizona actually made an ad on Craigslist selling their high school, making the price $2,018 – which is the year they are graduating 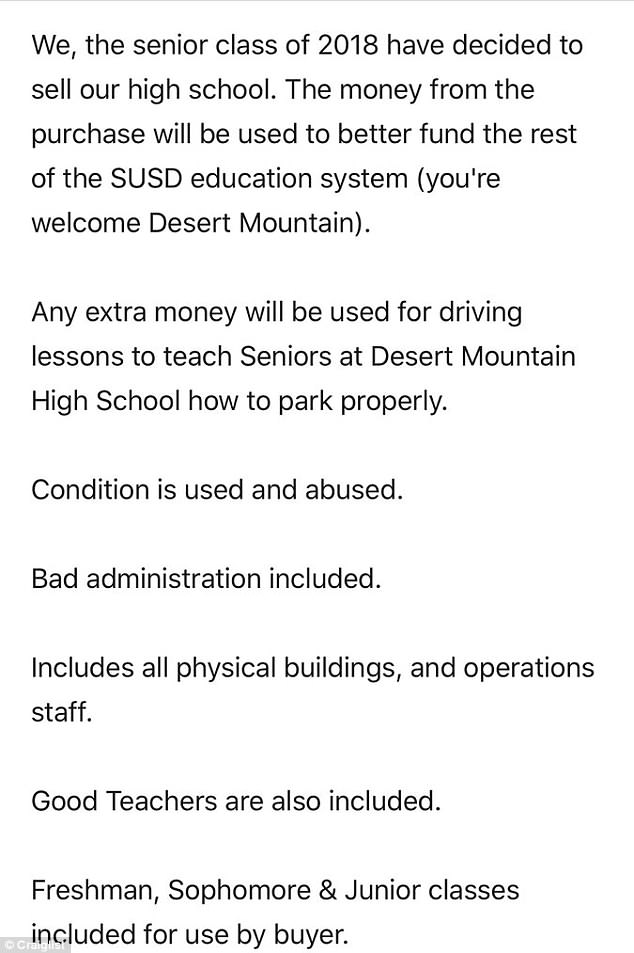 Sick burn: In the description, the students wrote that they’re selling the school and donating the money to better fund the education system 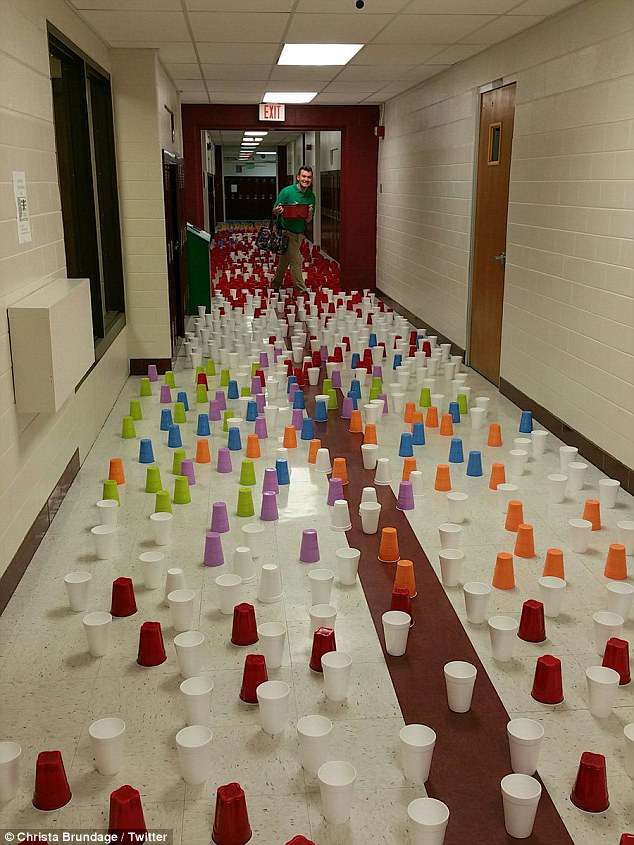 Flip cup: All of the hallways at Red Bud High School in Illinois were covered in plastic and Styrofoam cups 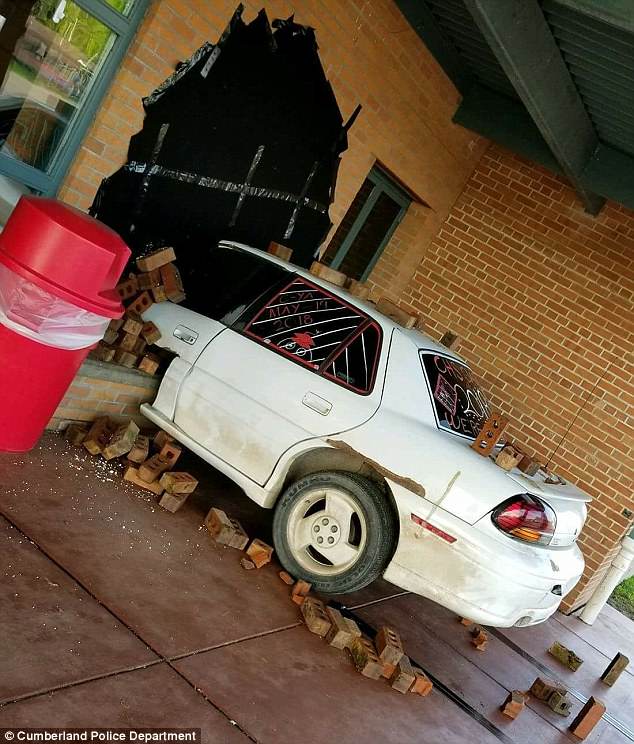 Crash: Four students from Cumberland High School in Wisconsin staged an elaborate senior prank where they actually fooled people into thinking there was a scary car crash 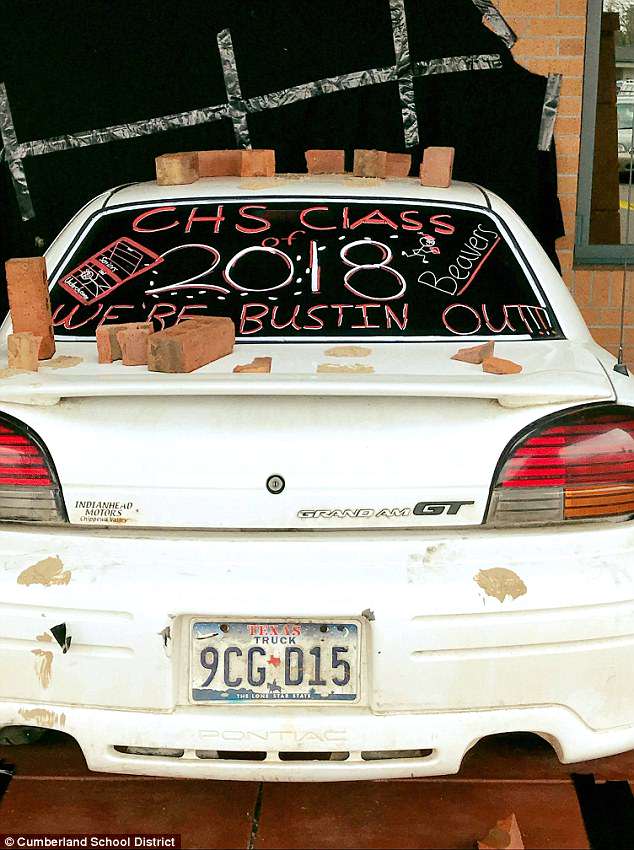 Elaborate: The students spent a lot of time on the fake crash, hanging a black tarp to look like a hole and stacking bricks on a beat-up old car