LEO MCKINSTRY: Our tainted honours system and a shameful failure to knight the 1966 World Cup heroes

They gave us the greatest moment in our sporting history, a triumph to be forever cherished in the collective memory of our nation.

As the football World Cup starts in Russia, no one expects the current England squad to come anywhere near the epic achievement of the heroes of 1966, when Bobby Moore led his side to victory.

Yet for all that success, most never received the official recognition they deserved. The warm glow of national pride did not translate into meaningful honours for the whole team.

It is true that Alf Ramsey, the brilliant manager who masterminded the World Cup win, was made a Sir in 1967, but none of the players were given knighthoods during their careers. Captain Bobby Moore received only the OBE.

It is true, too, that two winners — Bobby Charlton, probably England’s greatest ever footballer, and Geoff Hurst, scorer of the hat-trick in the final — were knighted in the Nineties. But since then, none of the team has been elevated to a knighthood. 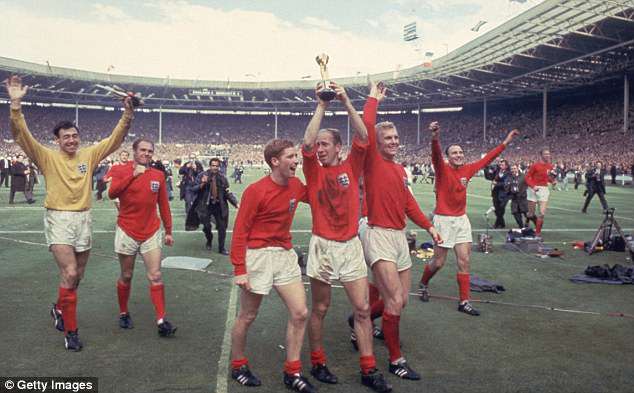 Bobby Moore, who died of cancer in 1993, never received one. Worse still, the football establishment that basked for decades in his 1966 achievement failed to employ his talent and fame, refusing to draw him into its governing circles or use him as an ambassador for the game; after unhappy spells as a minor club manager he ended up as a pundit on local radio.

Other giants of that World Cup victory have also died with little recognition. Alan Ball, the midfield dynamo, in 2007 and Ray Wilson, the left-back, just last month.

But six men from the 1966 team are still with us — and remain shamefully neglected by the honours system. Yes, several (as well as Ball and Wilson) were handed MBEs in 2000, but it comes nowhere close to matching the scale of their feat.

Contrast this official indifference with the way baubles are so readily showered on figures in all walks of life who have given the country nothing like the same service.

Handed out by an establishment that considers cronyism, political partisanship and cheerleading for the current fashionable orthodoxy more important than real accomplishments.

Only yesterday, this paper reported that two recent recipients of CBEs — the music entrepreneur Kanya King and the engineer Naomi Climer — sit on the very committees that recommended their own awards.

Meanwhile, last week’s Queen’s Birthday Honours were dubbed ‘rewards for failure’ after a CBE was awarded to Mark Carne, the head of Network Rail, blamed by Transport Minister Chris Grayling for the chaos, cancellations and delays due to new timetables.

Nor should we forget David Cameron’s Resignation Honours list in which he took cronyism to new heights, bestowing no fewer than 46 former aides, advisers and ministers with gongs in a shameless display that would have disgraced a medieval court.

Andrew Cook, a former Treasury minister who gave £350,000 to the Remain campaign, was given a knighthood — another example of reward for failure. Isabel Spearman, Samantha Cameron’s stylist was made an OBE for doing her job.

Of course, politicians from Lloyd George who sold peerages, to Harold Wilson with his ‘Lavender List’ and Tony Blair with his ‘cash-for-honours’, have made a career of abusing the system. Given this culture, knighthoods for the six unhonoured World Cup heroes would help redress the balance and provide a welcome antidote tp the current cronyism.

There could be no suspicion of backscratching or sleaze or reward for failure. The men of 1966 achieved far more for Britain than all of the establishment pen-pushers, party apparatchiks and paper-shufflers routinely given gongs.

Arch-Remainer and former Deputy Prime Minister Nick Clegg —who led the collapse of the LibDems, from 57 MPs to 8 by the time he resigned in 2015 — was given a knighthood in December.

Compare his malign influence on public life with that of Gordon Banks, the England goalkeeper who brought pleasure to millions through his unparalleled skill. It cannot seriously be suggested that the Tory MP and former Wales Secretary Cheryl Gillan, made a Dame in the last New Year’s Honours, is more deserving than Martin Peters, the magnificent midfielder who scored one of the goals in the 1966 final, made 67 England appearances and played professionally until he was 38.

What about Jack Charlton, elder brother of Bobby and another of the six survivors. As a defender, he had a successful career with Leeds and England before he went into management, where he achieved wonders with the Republic of Ireland side for a decade from 1986.

Yet Charlton is more honoured in Ireland than in his native land. Not only has he been given honorary Irish citizenship, but in 1994 he was also granted the Freedom of Dublin, the first Englishman to be given such status since 1854.

There would be nothing sentimental about knighthoods for this World Cup sextet. Each deserves the award on their own merit.

As well as Banks, Peters and Jack Charlton, there is George Cohen, one of the finest defenders in history. And what about Nobby Stiles? Because of his short-sightedness, he wore strong contact lenses on the field and thick glasses off it. During play, he kept his false front teeth wrapped in a handkerchief on the bench.

Up front, Roger Hunt was a tireless forward with a magic touch in front of the net. A stalwart of Liverpool who made 400 appearances for them, and held the record for most goals in the club for more than 20 years. Hunt is already called ‘Sir Roger’ by Liverpool fans.

The case for their elevation is given more urgency and poignancy by the fact that some are now ill. Nobby Stiles, suffers from Alzheimer’s, as does Peters. Jack Charlton, 83, has to endure worsening memory loss.

The team of 1966 did so much more than any subsequent England side, especially the so-called ‘golden generation headed by David Beckham, which left only disillusion despite the enormous riches earned in the Premier League. (When the honours establishment made a rare sensible decision to reject Beckham for an honour, he responded by calling them ‘a bunch of c***s’ and the honours system a ‘f*****g joke’ in leaked emails.)

Moore and his heroes had nothing like the financial rewards of Beckham and his ilk. Most earned £100 a week in the mid-Sixties, and when they won the World Cup, the squad of 22 players shared just £22,000 between them.

‘Money was always tight,’ recalled Gordon Banks, whose father was a steel worker in Sheffield. But such experiences may have helped to explain their thirst for success on the field.

There have always been inconsistencies in sporting honours, with an imbalance in favour of administrators, not players.

A knighthood was given in 1991 to Bert Millichip after his dismal spell in charge of the FA, in which he presided over Hillsborough, mass hooliganism and financial troubles.

Sometimes, governments are gripped by sudden gusts of emotive populism, as happened after the 2003 Rugby World Cup, when the entire victorious England squad players was honoured, or in 2005, when similar honours with dished to all of England’s Ashes-winning cricketers.

With all due respect, winning the football World Cup is an even greater achievement, given the competition in the sport.

That is why knighthoods for the men of 1966 are so overdue. They are not just heroes. They are also role models, for unlike many of today’s overpaid premiership stars, none has been involved in any scandal. Dignity, restraint and modesty have been their hallmarks — which just makes the argument for their elevation all the more compelling.