"Jalla, jalla! No time to stand around, we're very behind!" yells Mehdi Elkhaoudy, adding the same instruction in a couple more languages for good measure. We're in Morocco near Ouarzazate, centre of the country's film industry, where Melbourne's flapper sleuth Phryne Fisher is making a high-heeled leap on to the big screen in Miss Fisher and the Crypt of Tears; Elkhaoudy is first assistant director. Standing around, however, is an intrinsic part of any film shoot. An assemblage of extras, swathed in glamour versions of Bedouin robes, already have the glazed expressions worn by extras the world over after a couple of long days of being told to hurry up and wait. It is still early morning, but the sunlight reflected from the rocks where a small girl is scrambling up and down for the camera is dazzling. 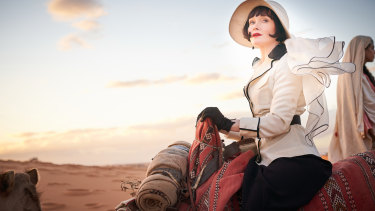 Miss Fisher's Murder Mysteries, adapted from Kerry Greenwood's historical mystery novels and starring Essie Davis as an It-girl detective who likes to drive fast cars, can fly a plane and has a golden pistol in her handbag, is one of the big success stories of Australian television. Running on the ABC for three series from 2012 to 2015, it was shown in 100 territories. Her fans are legion. They come from North America in particular to Melbourne to do Miss Fisher walks and have themselves photographed in ‘20s fashions at the travelling Miss Fisher costume exhibition. There have even been Miss Fisher-cons – like Comicon, but with cloche hats – in Seattle, Portland and New York.

Nobody can pin down exactly why Phryne Fisher has captured so many imaginations. Davis says it's fun to be inside her. "She's full of joy," she says. "Even though she has dealt with great sadness, she seeks the positive, she's a fighter for the underdog, she's a changer of rules and she's super-naughty." The fans they meet are usually women over 55 who say they find her inspiring. On the other hand, Miss Fisher is reported to be a popular theme for pre-pubescent girls' parties. "When I'm talking to fans in Australia," says Nathan Page, who plays Miss Fisher's ongoing, will they- won't they love interest Detective Inspector Jack Robinson, "the demographic I often see is grandmother, mother and daughter. They'll watch it together, while the husband is locked out and has to cook dinner."

So when producers Fiona Eagger and Deb Cox, who also writes the scripts, revealed hopes of one day making a feature film version, those fans chipped in with a million dollars – about a ninth of the total budget – in crowdfunding. That show of support, says Eagger, convinced Screen Australia, Roadshow and other investors there were people out there who wanted to see it. "It was quite tricky trying to finance it, because it hasn't got what you'd call feature film A-list actors who help you get big money, necessarily," says Eagger. Investors wanted an established director; she insisted on the unflappable Tony Tilse, one of the original directors on the television series, who had honed his craft with HBO. They dangled millions if she would just get Margot Robbie to play the lead. "But what are we doing this for? Part of the enjoyment is watching Essie. Nobody else could be Phryne for us: she's magnificent."

All the television shows were set in or around Melbourne in 1928. The film had to be bigger and bolder in every way, which encouraged thoughts of an exotic setting. "Indiana Jones was definitely a touchstone," says Eagger. "We have gone more for the adventure-action-hero aspect, because we can increase the stunts and ambition when we are not working to a television schedule."

Morocco is standing in for the British protectorate of Palestine; the film opens with a veiled Phryne scaling a jail wall to free a young woman who has been imprisoned for agitating against the colonial regime. As a child, Shirin was the sole survivor of a disaster that killed everyone else in her village, supposedly the result of a curse connected to an emerald amulet stolen in a tomb raid. Back in England (actually Melbourne), Miss Fisher sets about unravelling the truth, which turns out to have less to do with magic than with greed, guns and longstanding guilt. 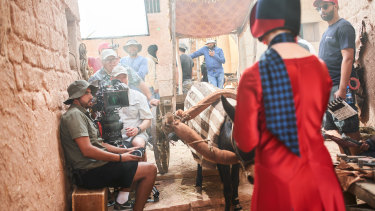 Davis and the crew on the streets of Morocco’s Ouarzazate, where part of Miss Fisher and the Crypt of Tears was filmed.

Our first day is spent at a former vineyard that has been turned into a desert oasis, with village houses made out of plasterboard and spinifex sprouting from flowerpots hidden under the imported sand. The scene is a flashback to Shirin's childhood, before the village was destroyed and her mother killed. "I do conceptual drawings and then we have to make it fit," says art director Lance Whitehouse. The plasterboard turned out to be too industrially finished and had to be worked over – "they needed straw and camel dung" – and every building had to have a metre sliced off the top.

Next day, the whole village will be moved seven hours away to be buried near a volcano, which is a problem as it is much heavier than expected; the local idea of lightweight turns out to be solid plaster. "We're all learning," Whitehouse says stoically. "The surprise here is that we had nail guns and power tools, but here we had to buy hand tools." A greater surprise occurred when a young carpenter used one of those tools – a pair of pliers – to pull out a painful tooth. "I would have sent him to a dentist," says Whitehouse. "But he said no, it's fine now."

Next day, with the village somehow duly gone, we are on a set out in the desert originally built for Ridley Scott's 2005 crusades epic Kingdom of Heaven. It is just one of four versions of Jerusalem looming out of the sands around Ouarzazate that are very much in demand; the Miss Fisher team has been able to slip in while a bigger German production moves for three weeks to Rabat. The vast building looks and in places feels like solid mud, dressed with a marketplace full of amphoras, sheepskins, basketware and some vegetables; the crenellations along the tops of the city walls and along balconies provide hidden vantage points for cameras. Lights stored in the corridors under those balconies are covered in rugs against the dust. There are complicated moves afoot; Miss Fisher driving through the city gates in a 1924 Renault and a demonstration at the same gates protesting against British rule. It is very hot.

"Part of being from Australia is that there is this harsh light we're used to," says Roger Lanser, the cinematographer and another longstanding Miss Fisher alumnus. "The difference here is the contrasts we get with black tents rather than cream tents. Nature provides the colour here." He is also enthused by the extras. "They look fantastic. One guy here has permanent work because he looks like Jesus. He goes round town giving benedictions." There is certainly no sign of local ennui with being a Saharan Hollywood. Whitehouse says locals would come to watch them work on the village set, brewing tea and offering food.

"Half the work is done with wardrobe and just being here," says Nicole Chamoun, who is playing Shirin's mother in flashbacks. "Just being here with the extras, I see myself in them." Chamoun, who was nominated for a Logie for her role as an Iraqiqi in the SBC mini-series  Safe Harbour, grew up in Rowville, an outer suburb of Melbourne, but her parents are Lebanese and her home language is a Lebanese dialect she says is close to Palestinian. She is somewhat dazzled to discover that the 11-year-old actress playing young Shirin in the flashback scene is a star. "She was in Moroccan MasterChef – she gets recognised in the street!"

The adult Shirin is played by Izabella Yena, whose family is Greek Cypriot. She has worked in theatre since leaving drama school in 2016, but this is her first feature film. Among the Arabic words she has had to master is one meaning guardian angel, which she says describes Davis for her. "She has been so helpful and so giving – I mean, she knows the world better than anybody. So as soon as you step on set, the world of Miss Fisher is there and you just step into it." She admires Shirin for her political backbone. "It's the kind of role I'd want to watch on TV. There is a young girl my age who looks like me and it changing things, making a stand and isn't being silenced because of her environment." She doesn't see many people on television who look like her. "I mean, I don't see many Greeks. But I think it's changing. I hope it is."

We are staying in a hotel in Ouarzazate in a maze of small villas with a swimming pool in easy reach; Hollywood in the desert. The cast and crew will be here for three weeks, then return to Australia for another three weeks of shooting. "I looked at other films that have gone from a television series to a feature and tried to work out why they didn't work, so we wouldn't fall into the same traps," says Eagger. In a television series, the characters necessarily remain the same; in a film, they have to go through a whole arc in under two hours. She hopes they won't go the way of Kath and Kim. 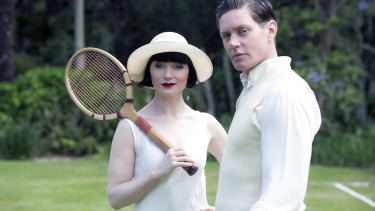 Davis with Nathan Page, who plays her love interest Detective Jack Robinson, in a scene from Miss Fisher’s Murder Mysteries.

There are other tensions. "There is the tyranny of distance and we can't bring everyone with us. We're probably understaffed in some areas." Working in Morocco is obviously different: the working day is longer, with less bother about schedules. Tilse is used to working in Asia, she says; he likes a looser approach. And it's true, she says, that he is good at responding spontaneously to what he sees. Looseness makes her nervous. "When you're on a tight budget, planning is key," she says. "You know, all the value has to be on screen so it's a juggle. But Australians are very can-do and inventive and I'm excited to see what we can pull off. And I look at what you've just seen filming and I think yes, this is going to be OK."

Miss Fisher and the Crypt of Tears opens on February 27.