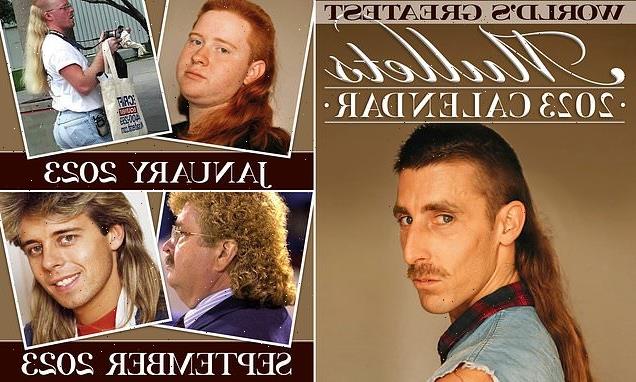 Shoppers have been going wild online for a £14 The World’s Greatest Mullet 2023 calendar.

The calendar, which features Pat Sharps and other stars with mullets, is for sale on Etsy for £13.95.

It’s online description explains how it is the ‘ultimate quirky gift’ and will ‘be sure to cheer up a loved-one, family member, friend or work colleague.’

Many customers have been amazed by the calendar and posted rave reviews of the piece online, with one commenting: ‘Perfect gift for Christmas and exactly what I wanted. 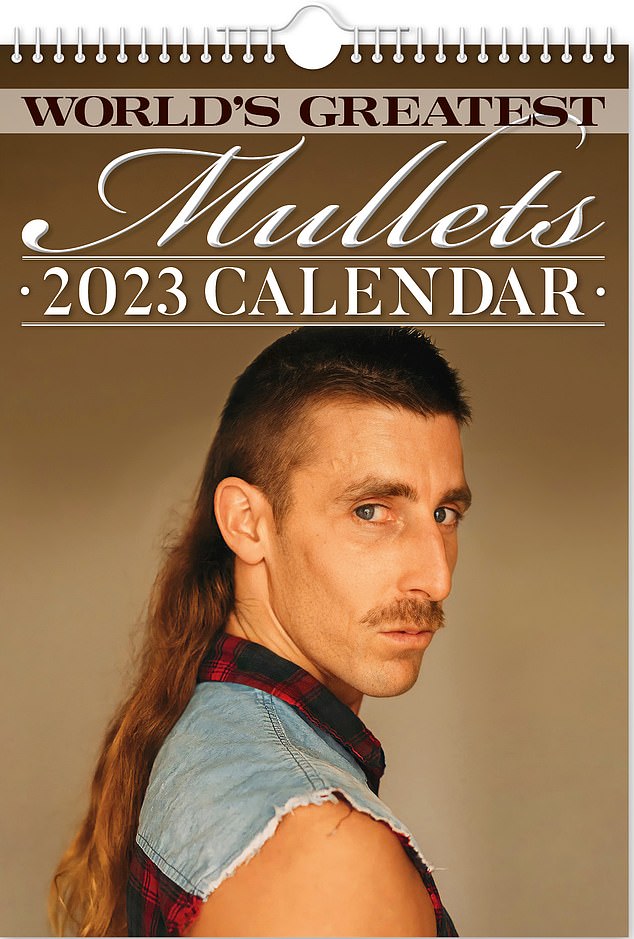 ‘Also really quick delivery and well packaged so no damaged.’

Another added: ‘Expectations were fully met. Gift was great.’ 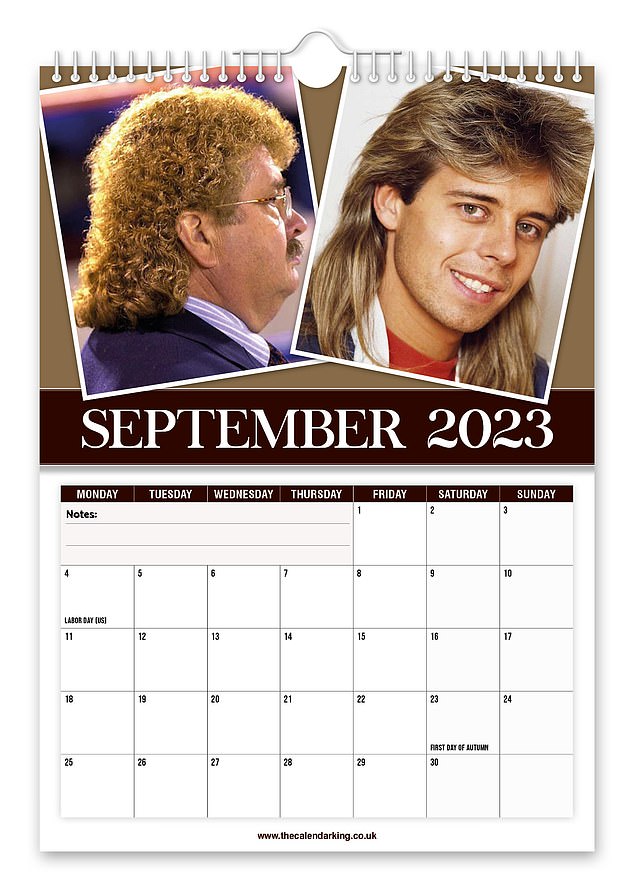 The calendar, which features Pat Sharps and other stars with mullets, is for sale on Etsy for £13.95 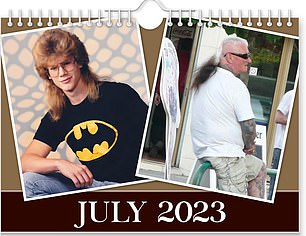 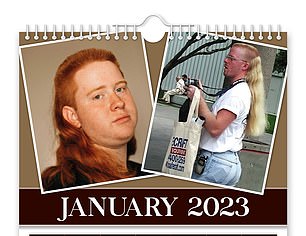 It’s online description explains how it is the ‘ultimate quirky gift’ and will ‘be sure to cheer up a loved-one, family member, friend or work colleague’ 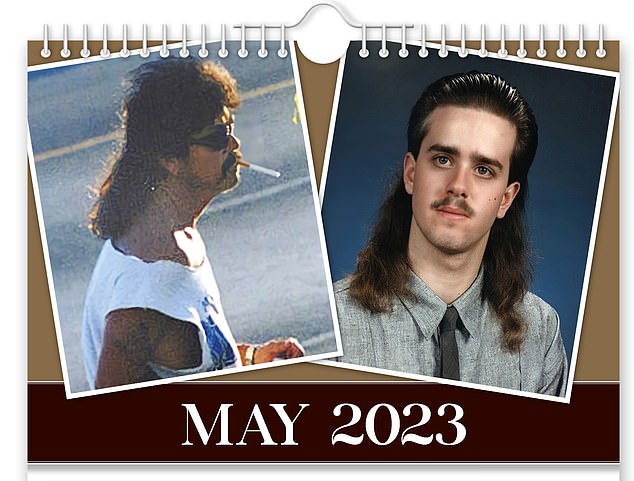 The description of the calendar online read: ‘Pour yourself a gin and tonic, have a seat and look no further!

‘This beautiful 2023 World’s Greatest Mullets A4 size novelty wall calendar will be sure to cheer up a loved one, family member, friend, work colleague or win that special someone over.

‘Help put the year behind them by adding a touch of humour to any Birthday, Christmas Present, Secret Santa, Wedding Anniversary, Marriage Proposal or Special Occasion with a calendar that will no doubt be talk of the show. 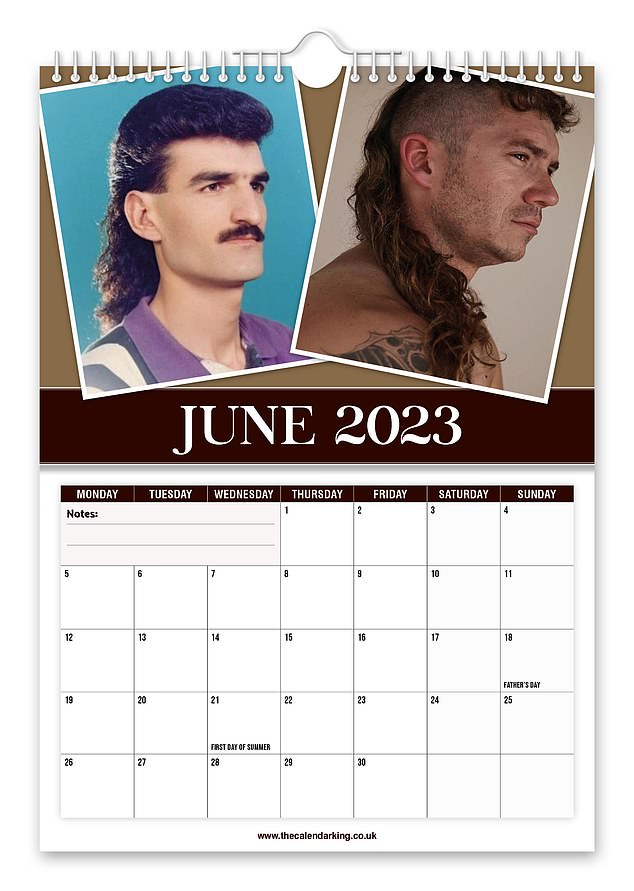 Despite being a calendar celebrating purely mullet hairstyles, a number of the men had different styles of the chop 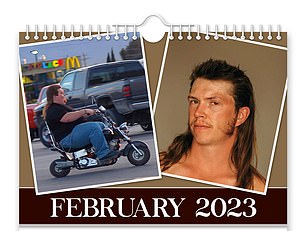 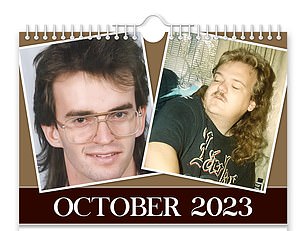 The unusual present is receiving rave reviews from shoppers online, who have praised it for being the ‘perfect’ gift 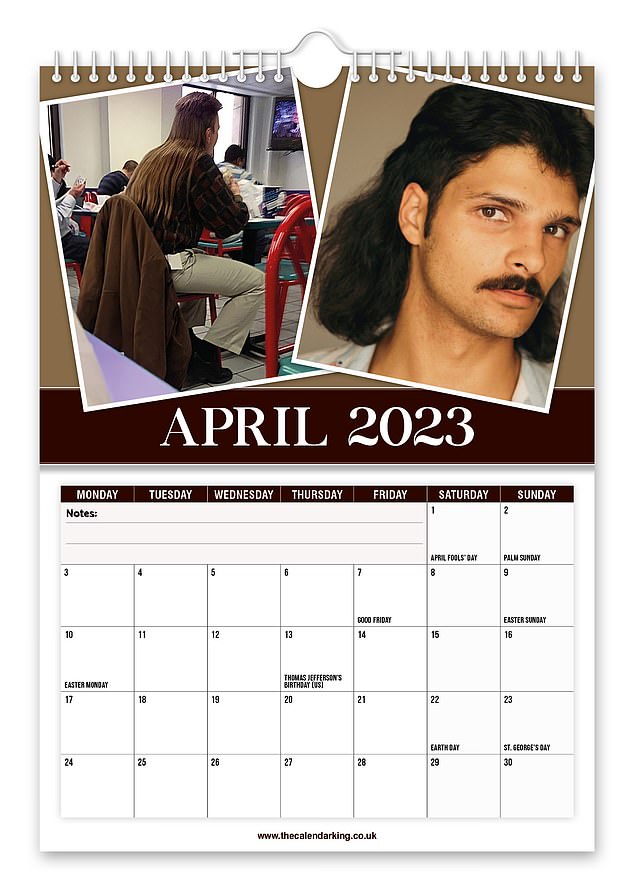 One man, featured in April, had a long mullet with hair which reached well beyond his shoulders (pictured)

The mullet was made popular in the ’80s by stars like Billy Ray Cyrus, David Bowie, Paul McCartney, Patrick Swayze, George Clooney, and John Stamos, but according to the US Championships’ website, it’s been around for much longer than that.

‘According to some historians, the mullet has been around since at least Ancient Greece, where the style was as much for function as it was for fashion,’ it explained.

Cropped hair around the face with longer locks in the back allowed for both visibility and a protective layer of hair for your neck.

‘The relative ease of maintaining it makes it possible to keep up even without the existence of barbershops and hair salons, and the practicality makes it perhaps one of the oldest haircuts in human history.’ 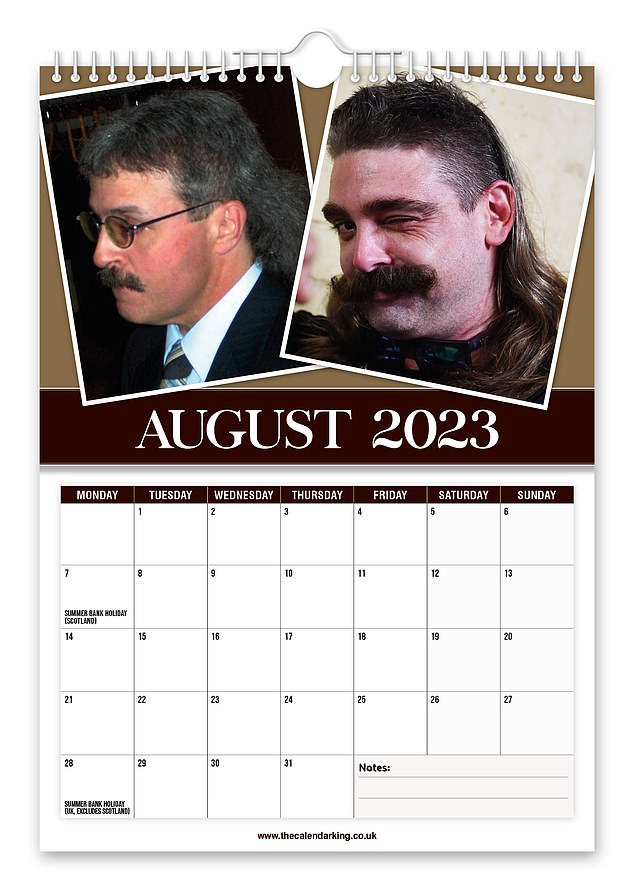 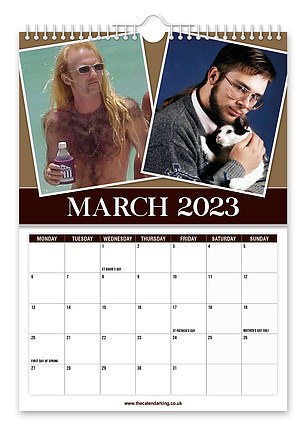 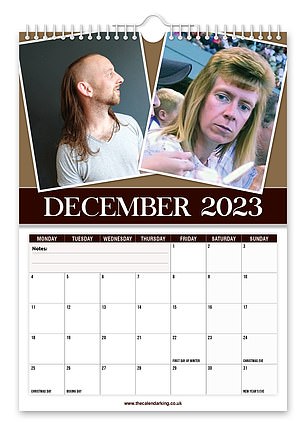 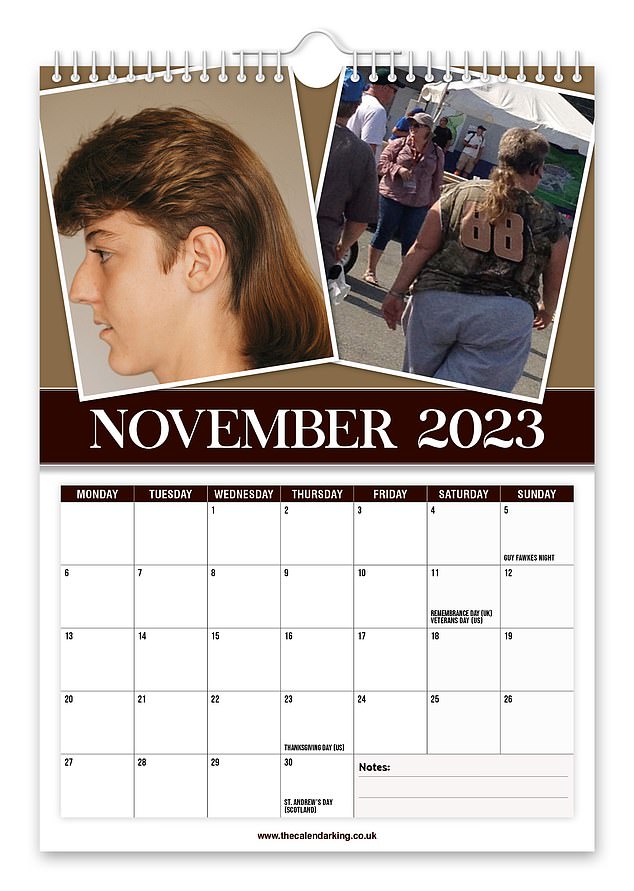 The calendar is described online as a ‘beautiful’ novelty wall calendar which will ‘be sure to cheer up a loved one, family member, friend, work colleague or win that special someone over’

It added that in Native American tribes, long hair represented strong cultural identity and ‘values of family and community.’

As for where the name came from, it actually originated from the Beastie Boys in 1994, when they released a song called Mullet Head. However, it was soon after that the hairstyle became nearly extinct.

But the Mullet Championships pointed out on its website that while the peak of mullets ended in the 1990s, the style ‘never completely faded from relevance.’

‘It slipped from the good graces of the masses but became iconic in various subcultures: everyone from country music stars and lesbians, to hockey players and Native Americans,’ it wrote.

‘No matter what you think of it, the mullet has become a staple of the American aesthetic.’ 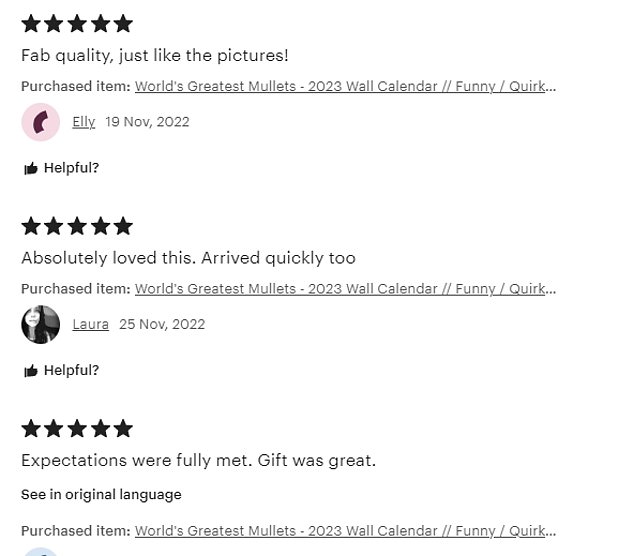 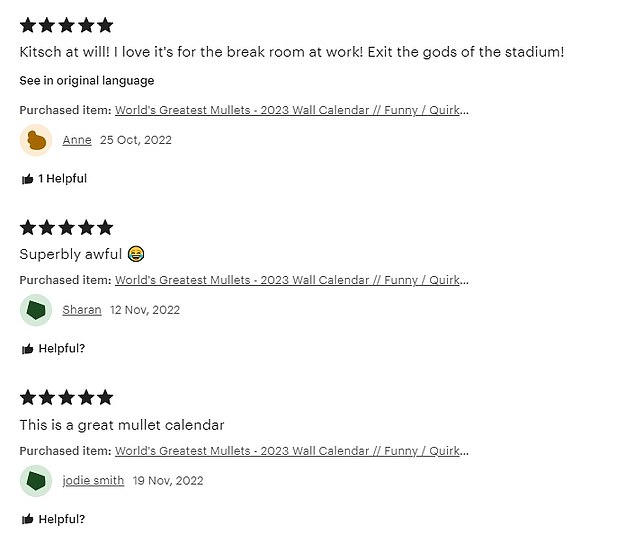 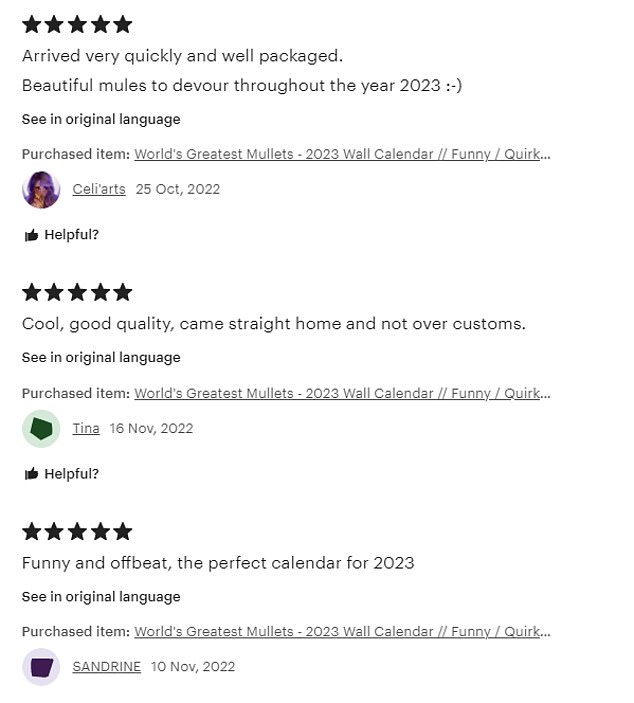 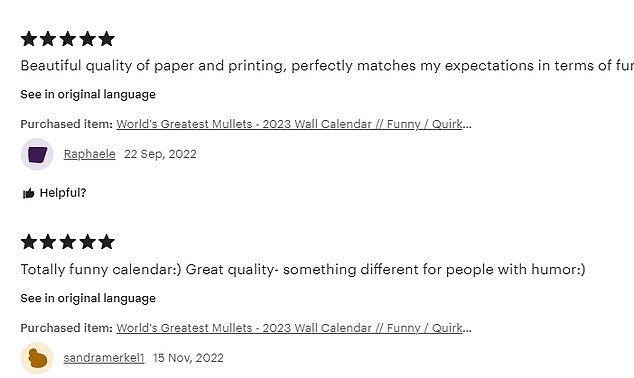 Many shoppers said they were amazed by the calendar, calling it the perfect novelty gift for Christmas