Home » Lifestyle » SIMON MILLS: The joy of sewing for men

Needlework has seen a boom among a rather unexpected group. But it comes as no surprise to SIMON MILLS who got a sewing machine on his 12th birthday… Here, he shares the joy of sewing for men

Many summers ago, I was lucky enough to meet Prince Charles. It was a hot July day at the heir to the throne’s Highgrove estate, so Charles had elected to wear his favourite cream linen suit, handmade by Savile Row tailor Anderson & Sheppard.

Up close, it was clear the suit wasn’t a new purchase. Threadbare cuffs, thinning elbows, premium points of wear and tear had all been lovingly repaired to the Prince’s personal specification.

However, the beautifully executed, virtually invisible stitches and reinforcements lent the jacket (older than both the prince’s sons) a patina of age and experience, a lasting and sustainable quality. 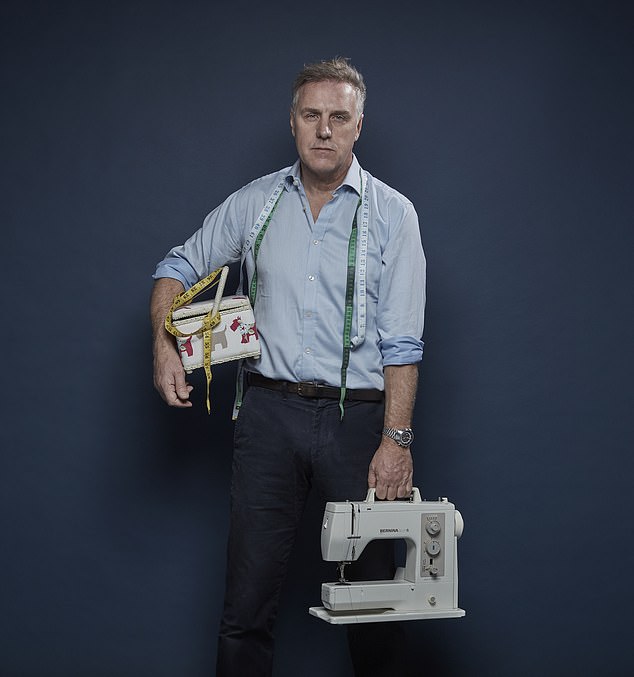 Simon Mills (pictured) believes more and more men are turning to sewing and needlepoint for hobby, necessity, or pleasure

As a keen hemmer and stitcher myself, this proved to be the perfect conversational gambit. ‘I’m a rags and patches man,’ the Prince told me with a smile as we discussed the finer points of tailoring, needlework and Savile Row craftsmanship.

Turns out Prince Charles is bang on trend, because more and more men are turning to sewing and needlepoint for hobby, necessity, or pleasure, no doubt encouraged by Patrick Grant and Joe Lycett on BBC’s ratings-busting The Great British Sewing Bee.

John Lewis has seen a 300 per cent rise in sewing kit sales year-on-year, with sales of sewing machines up by 114 per cent over the past 12 months.

Debates concerning the dark art of the overlocking machine (which can sew two pieces of cloth together) or the mysterious blanket stitch may not be pub banter just yet, but as restrictions continue, the conversation does seem to be becoming craftier with each passing month.

Kantar, a market research company which tracks Twitter conversations, recently revealed that 53 per cent of the people discussing arts and crafts in the UK were men, while a Mintel survey found that 21 per cent of men are expected to spend more time doing arts and crafts over the next 12 months than before the pandemic. 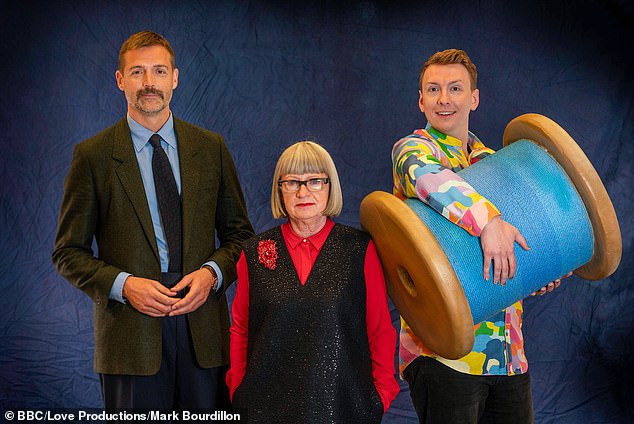 Challenging the woefully outdated stereotype that the hobby is only for women, even Olympic diver Tom Daley has been showing off his skills with the needle, posting photographs of his hand-crocheted swimming trunks (and hats and bootees he made for his two-year-old son).

Meanwhile, fabric shop Merchant & Mills, based in Rye, East Sussex, issued a pattern for a men’s workwear classic, The Foreman Jacket, which sold like sourdough starter during lockdown.

‘Sewing doesn’t have to be this mumsy thing with pink scissors,’ says Merchant & Mills co-founder Carolyn Denham. ‘Men relate to it being a ‘quality’ thing.’

As for me, I’ve had my own sewing box since the age of nine. (For a while, I even affected one of those camp, wrist-mounted pin cushions.)

I started off putting patches (yellow Smileys, ‘Keep On Truckin’ etc.) on the back of my Wrangler jacket, progressing to creating my own football scarf at ten — adapting my mostly black school muffler to something I could wave at Hull City matches with hand-stitched yellow cotton stripes.

When flared trousers were fashionable, I learned to take a triangle of scrap material and sew it into the unpicked, knee-to-cuff seam of my Lee Coopers to create the required ‘loon pants’ effect.

When drainpipes were de rigueur my mum, who had gifted me my first sewing machine for my 12th birthday, showed me how to ‘take in’ my grey school trousers by turning them inside out, pinning to the desired width and then graduating the run-in to the existing stitch line.

On my gap year, working as a deck hand on a yacht, I developed a nice side-hustle by patching boat workers’ jeans with denim cast-offs.

Over the years, my skills have grown. As well as hemming trousers, I can do pretty decent darts on the back of a blazer (for a more flattering fit), thread-shank a coat button and execute a false turn-up on a pair of trousers.

If I see a nice second-hand suit with big shoulders, I can take it home, unpick the lining and remove the padding to create a more modish soft-shouldered style. While some men turned to binge watching box sets during the second lockdown, I decided to tackle the ongoing moth problem in my wardrobe with long and devoted darning sessions.

After a quick bit of YouTube mentoring, the slow and patient business of up and over darning — creating and incrementally strengthening a woven cradle of stitch and reversed stitches — began. My first effort was an amateurish disaster. My fourth, a triumph worthy of Prince Charles.

Now why are men, formerly concerned more with movies, girl-chasing, outdoor pursuits and, well, just slobbing out in front of the telly, taking to the needle and thread? The manual dexterity and mental application required for sewing is a soft and fuzzy antidote to mindlessly inactive digital entertainment. Hand-stitching is therapeutic and rewarding.

As designers attempt to distance themselves from throwaway, fast fashion, sewing and the gentle evidence of repair has become the mark of the pro-sustainability anti-waster, an appreciator of honest, home-spun quality.

The industry is getting hip to this, too. A recent men’s collection by Greg Lauren, nephew of Ralph, was made up of garments upcycled from vintage pieces, while super-chic Italian label Brunello Cucinelli runs a resuscitation service.

‘Repairing . . . consists in making anything pass from a state considered less good to a better state,’ says Cucinelli, quoting Benedictine monk Jean Leclercq. ‘The gesture of reparation is . . . all about respecting the value of things and people who, over time, have made those things with dedication and love.’

For Gen Z (that’s men born after 1996), sewing is also part of a new and hip thing called ‘adulting’, where men in their 20s find out how to do elementary stuff that the rest of us learned from our parents.

As we approach 2021, the simple act of hemming trousers with iron-heated Wonderweb will guarantee a chap a slew of likes on Instagram. Many of them from women.

This particular sew bro and aspirant sex thimble? He’s asked Santa for a new seam ripper, a bodkin and a hemline loop turner.

Christmas Day will be spent wearing a brand new jumper. By the end of Boxing Day, I’ll have turned it into a tank top.