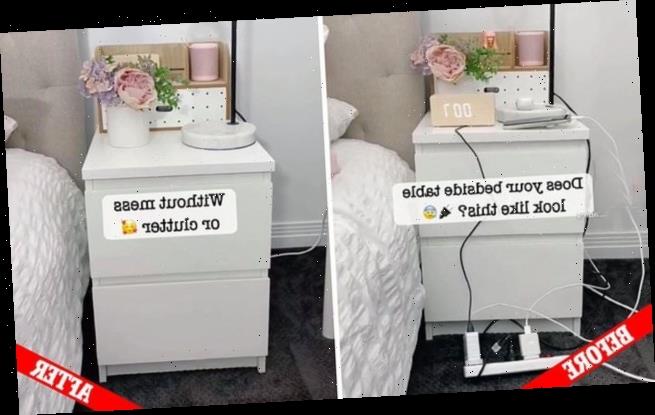 An Australian mum has revealed her simple trick to organise the chargers beside the bedside table, but not everyone deems it to be a safe solution.

Carolina, from Perth, shared a video on TikTok demonstrating how to execute the easy hack, which has since gone viral and received more than 127,000 views.

In the short video Carolina removed the drawers, pulled the power board through the back and inserted the drawers back into place.

But while the tip neatly arranged the space, some TikTok users were concerned about whether placing the electrical appliances in a drawer would become a fire hazard. 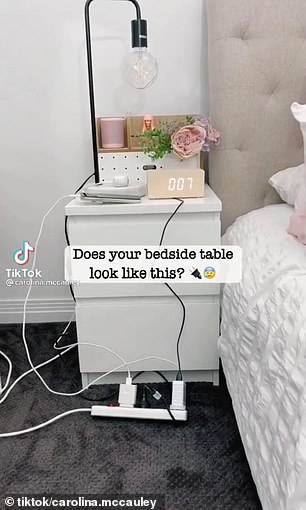 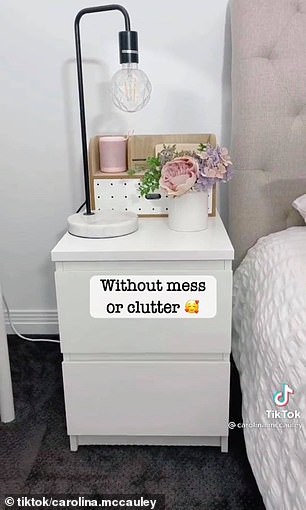 The bedside table was originally cluttered with cords connected to a charging board, but the trick quickly fixed this problem

While the hack hides the cables inside the top drawer and makes the bedside table look neater, many voted against following the advice.

‘Isn’t this a fire hazard? Plug and appliances get hot during charging and use,’ one person wrote.

‘Um people…please don’t do this, it’s a fire hazard,’ another confirmed.

‘As a property manager, I have seen many fire incidents due to electrical shortages, close contact with flammable materials. This is a fire hazard,’ a third added.

According to Fire and Rescue NSW, problems with power boards can arise from dislodged placement, poor placement, inadequate ventilation and overuse.

The fire department recommends only using power boards with built-in safety switches, placing the boards in an open area and regularly checking the plugs are firmly fixed.

As an alternative to Carolina’s idea, the power boards can be placed beside the bedside table on the floor or hooked onto the side if it’s not close to the bed.

The best way to prevent electrical fires is to unplug all cords that aren’t being used or turn off the electricity via the power switch.

How to prevent electrical fires:

Before going to bed, turn off all electrical appliances at the powerpoint.

Turn off electric blankets and heaters when you’re not at home and before getting into bed.