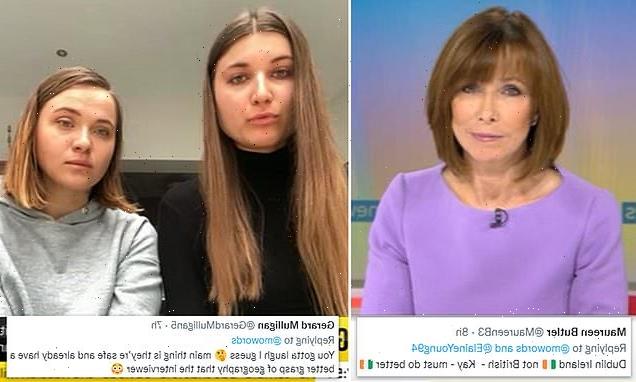 ‘Kay Burley asking refugees to thank the British for Irish hospitality’: Sky News viewers accuse presenter of suggesting Dublin is part of the UK during awkward interview with Ukranian women

Kay Burley has sparked outrage on social media after seeming to refer to Dublin as being part of Britain during an interview with Ukrainian refugees.

The presenter, 61, was joined on air by Allada and Anastaia from Kharkiv during a Sky News segment after a conversation about ‘wording’ with Peter Walsh, a researcher in Migration at the University of Oxford.

The Ukrainian women explained that they left the rest of their family behind when they chose to travel for four days to reach safety in Dublin following Russia’s attack on their city.

‘I’m so pleased that you are safe and what a terrible journey you’ve had. Hopefully you can start to build a new life in Dublin, safe in the knowledge that the British people are completely behind you,’ Kay commented.

Viewers were quick to take to Twitter to argue that Kay’s phrasing implies that Dublin is part of Britain, while others said she was ‘taking credit for Irish hospitality’.

However, others defended the journalist and claimed she was just being supportive. 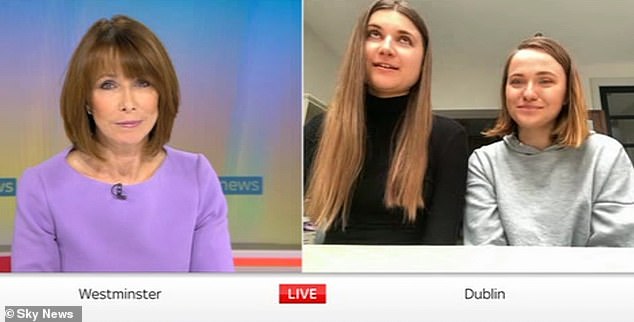 Sky News journalist Kay Burley, 61, (pictured left) has sparked outrage on social media after seeming to refer to Dublin as being part of Britain while talking to Ukrainian refugees Allada and Anastaia (pictured right)

Viewers also commented on Allada and Anastaia seeming to have better knowledge of geography than Kay as the pair responded to her comment thanking the Irish people for their hospitality.

The breakfast segment began with Kay asking the pair to share information about their experience.

Allada said: ‘Our homeland Ukraine as you know is under attack. Russian bombs and rockets. Our native city Kharkiv is currently a target of the enemy.

‘Civilians are dying everyday and our family they’ve stayed in Kharkiv and are hiding in a bomb shelter.’

She explained that they went to Dublin after first travelling to Poland, where they were unable to find accommodation or jobs.

‘We became stranded in Poland and had no idea, so we decided to go back to Ukraine. The fact that we are now in Ireland is just magic,’ Allada said.

Kay revealed Anastaia’s work as a child psychologist captured the attention of a woman who chose to help them.

The seasoned broadcaster went on to thank the pair for appearing on the segment while seeming to refer to Dublin as being part of Britain. 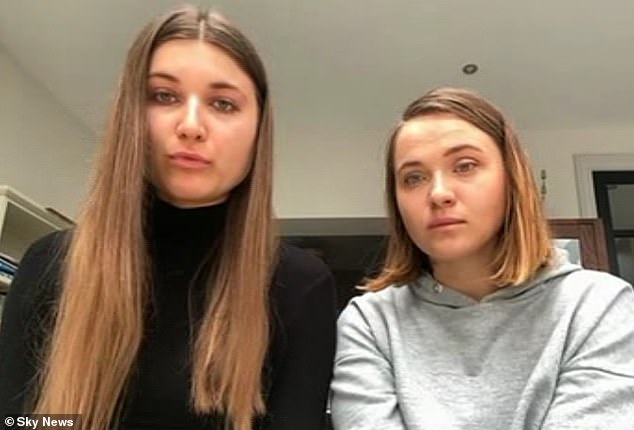 Allada responded: ‘Thank you. We want to thank the Irish people. We are so grateful for all the kindness and hospitality that they’ve treated us with and our Irish family who host us.

‘In this family we are surrounded by care and attention, we feel family warmth and we really appreciate it. We are touched from the bottom of our hearts.’

Many commenters were quick to blast Kay on social media as they corrected her, with one writing: ‘Dublin Ireland, not British. Kay must do better’

Another said: ‘Would you like to correct yourself Kay before you make any more errors… it’s Irish people all over Ireland who are supporting Ukrainians. Whatever British people are doing they certainly are not supporting the Irish response’

A third added: ‘You gotta laugh I guess. Main thing is they’re safe and already have a better grasp of geography than the interviewer’

‘Thankfully the ladies knew they were in Ireland rather than UK. Kay’s little Britain bias clearly on display. I wonder if she’d have had a similar slip had they been safe in France,’ a fourth wrote.

Other viewers attempted to defend Kay while arguing that she had a ‘slip of the tongue’.

One person wrote: ‘It’s quite obvious that Kay Burley was stating that she was pleased the girls are safe in Dublin and that the British people are supporting the interviewees. TBF to Kay, she can’t really talk on behalf of the Irish while representing the UK news/ people’

Another said: ‘Saying ‘we hope you can build a new life in Dublin safe in the knowledge that the British people are completely behind you,’ doesn’t necessarily mean the journalist thinks Dublin is part of Britain. The 2nd clause might just be an add on to first clause, and unrelated to Dublin.’