Saturday Night Live standout Aidy Bryant announced Monday that she has married comedy writer Conner O’Malley. Bryant shared a photo from the ceremony on Instagram, and though she did not offer commentary, she did tag her hairstylist, makeup artist and the photographers.

E! News has reached out to the bride’s manager for further details on her big day.

Bryant kept the wedding a secret, just as she did with her engagement. In April 2017, Bryant revealed on NBC’s Late Night With Seth Meyers that O’Malley had proposed six months earlier. 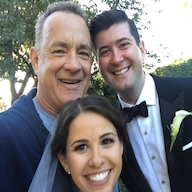 The newlyweds met as performers at the Annoyance Theatre in Chicago in in 2008, and they’ve been together ever since. “I had only had experiences with horrible mind games with men. But it was kind of perfect because I finally was like, ‘That’s what I don’t want. I don’t want games or manipulation or trying to make each other jealous. I want full, comfortable honesty,'” Bryant, now 30, shared with BUST in late 2015. “And that is really what Conner and I have always had.”

It’s unknown if the actress, who currently stars alongside Amy Schumer in the comedy I Feel Pretty, will return to SNL this weekend when Donald Glover hosts the show for the first time.