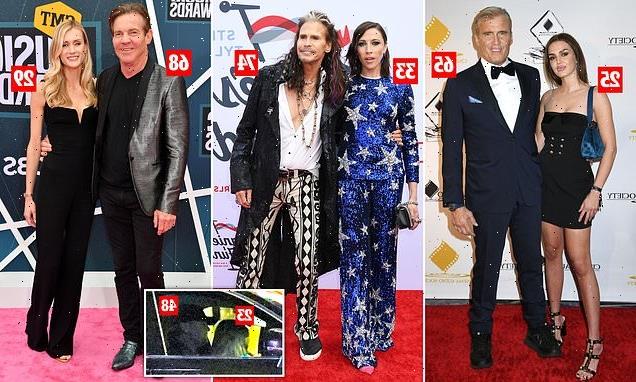 The 20-something club! As Leonardo Di Caprio is spotted with a new love interest, 23, Femail reveals the stars in their 50s and beyond who prefer a partner at LEAST half their age

Leonardo DiCaprio appears to have struck again after being spotted with a new girl who is half his age.

The Titanic star, 48, was snapped out and about with his new rumoured girlfriend Victoria Lamas, 23, in Hollywood this week, after splitting up with his ex Camila Morrone, 25, earlier this year.

Leo has gained a reputation for dating women under the age of 25 as he ages, which led to fans making jokes Camila had been ‘aged out’ of the relationship.

But the Oscar-winning actor might unfairly be taking all the flak when he’s far from the only celebrity to have dated women his junior. 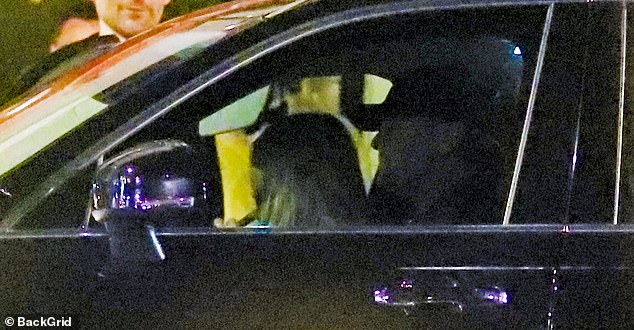 From Zach Braff dating Florence Pugh to Bradley Cooper’s long-term relationship with Irina Shayk, lots of stars appear to have a similar type to Leonardo Dicaprio…

After Leonardo DiCaprio was pictured out and about with actress Victoria Lamas, FEMAIL reveals the other famous men who are dating much younger women. Dennis Quaid and Laura Savoie have a 39-year age gap between them

Hollywood actor Dennis Quaid married Laura Savoie, who is 39 years his junior, in 2020 after the pair began dating in May 2019.

The couple have not shied away from addressing the almost four decades between them as eyebrows were raised when they announced their marriage.

In July 2020 he appeared on the TODAY show in the US, where he insisted the couple paid no attention to their age gap.

‘There’s 30-something years between us, and we just don’t even notice it,’ the actor-musician said. ‘I’ve never related to someone in my life better than we do.

‘We have such a great relationship and you know, love finds a way, wherever it is. You never know when love is coming, who it’s gonna be, and you have no control over it. We just couldn’t be happier.’

He told People in December that the pair enjoy ‘the most incredible relationship,’ and called Savoie ‘the love of my life’. 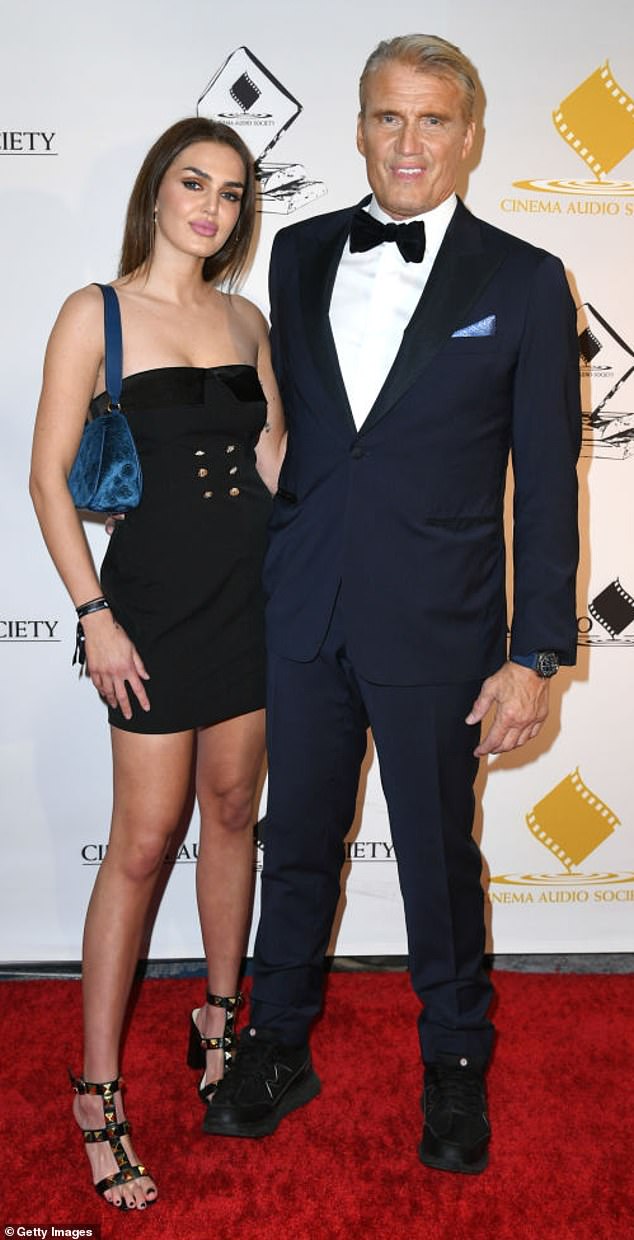 Dolph Lundgren and his fiancée Emma Krokdal have been dating since 2019, and Emma is a year younger than her partner’s oldest daughter

Despite the four decade age gap, the couple appeared loved up as they were spotted out and about in Beverly Hills yesterday afternoon.

They began dating in 2019 and went public with their relationship in January 2020 at the Cana Dorada Film & Music Festival in the Dominican Republic.

‘I feel very lucky that I have someone like Emma at this age. It’s changed my life and I hope I can give her the kind of help and support that takes a lot of time to discover and amass,’ he told Muscle and Health about his relationship last year.

In June this year, Dolph attended the premiere of a Minions film with his fiancée and brought hit two daughters along – one of whom is older than Emma.

Greta, 20, and Ida, 26, smiled with their father and soon-to-be stepmother as the foursome were dressed all in yellow.

Emma shared photos from the affair on Instagram and wrote, ‘Yellow squad to see the Minions.’ 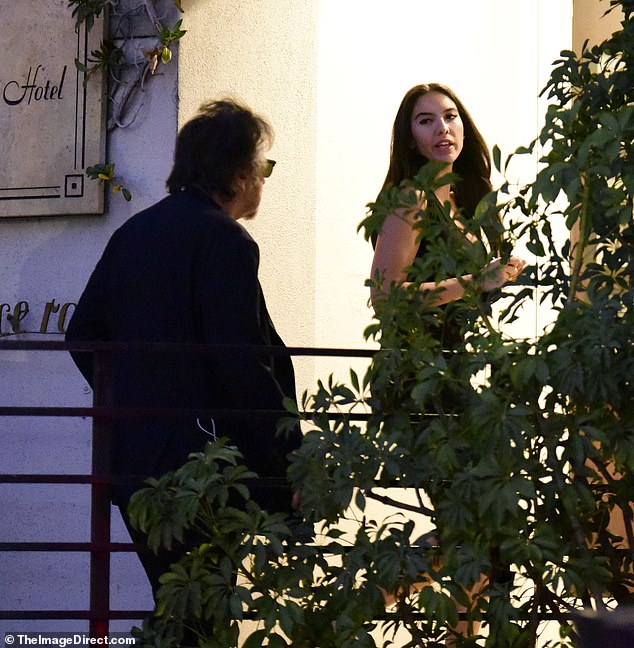 Acting legend Al Pacino and his girlfriend Noor Alfallah have a staggering 54-year age gap between them.

The Godfather star celebrated his 82nd birthday in September with his 28-year-old girlfriend by his side.

But at his birthday party at The Sunset Tower Hotel in Los Angeles, the age gap didn’t seem to be an issue for the couple, as they chatted it up and appeared in high spirits while entering the celebrity hotspot.

News of the couple’s age-gap romance hit headlines in April, after they were spotted enjoying a dinner date together in Los Angeles – and sources have claimed that they’ve been seeing each other since the pandemic.

Speaking to Page Six in April, an unnamed insider added that the age difference between The Godfather actor and the Kuwaiti-American film producer ‘doesn’t seem to be a problem,’ despite the fact that Al is ‘older than [Noor’s] father.’

Noor is no stranger to dating older men having previously enjoyed a romance with Mick Jagger, 78, and was even linked to Clint Eastwood, 91.

Noor – who is vice president of Lynda Obst Productions at Sony – dated the Rolling Stones frontman in 2017, when the rocker was 74 and she was just 22.

Following the end of their romance, Noor revealed her thoughts on their age difference – admitting that plenty of ‘people made comments,’ but insisting that it ‘didn’t matter to her.’ 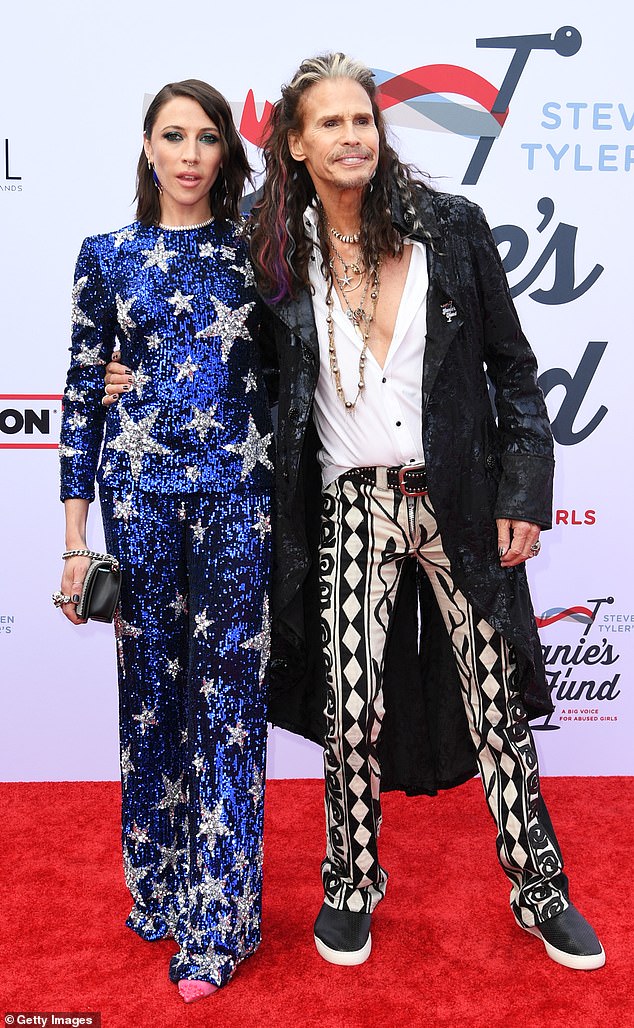 Steven Tyler and Aimee Preston (pictured in Hollywood in April this year) are separated by a 41-year age gap, but their six-year-strong relationship shows no sign of cracking

One couple which breaks the four decade age gap is Steven Tyler and Aimee Preston, who have a staggering 41 years between them.

The Aerosmith front man has been dating Aimee (who used to be his assistant) for six years, after first going public with the romance in 2016 when they appeared at an Oscar viewing party for Elton John’s AIDS Foundation.

Despite the age gap, the couple appear to be going strong, having made several red carpet appearances.

And at 33, Aimee is 11 years younger than Steven’s daughter Liv Tyler, who is 44 years old.

Although the couple don’t often speak publicly about their relationship, Aimee’s Instagram posts often pay tribute to her partner.

On his 71st birthday, People reports she posted a photo of him to celebrate, with the caption: ‘Send him a good vibe … or 71!

‘I love him whole heaps and I know lots of you do too!’

She added: ‘The years of orbiting the sun together just keep getting more of something I hope I never figure out.

‘Happy Birthday to the love of the life!’ 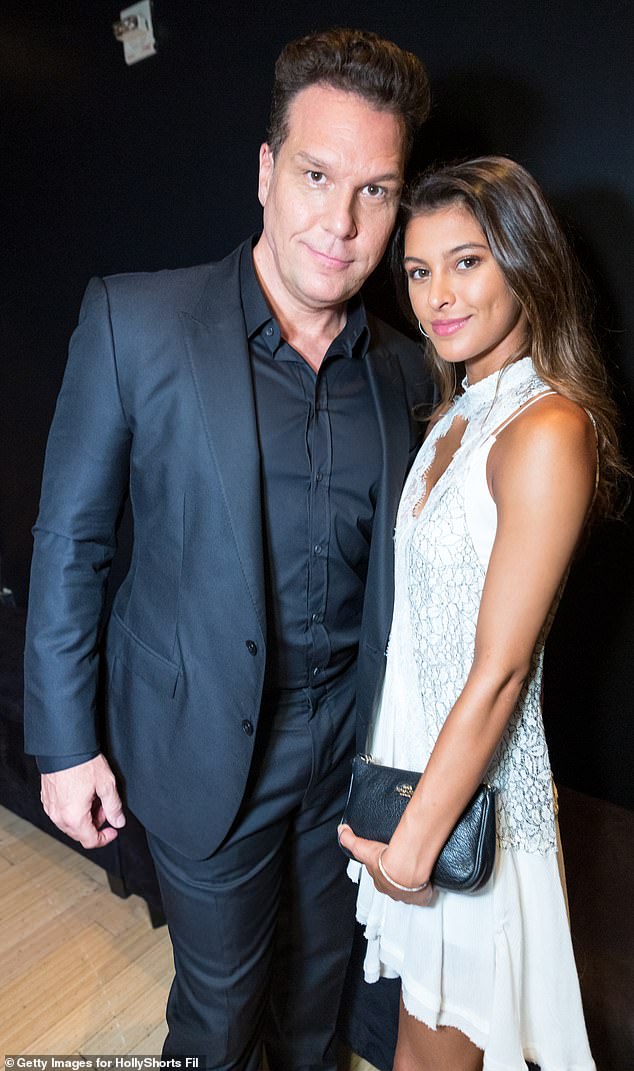 Dane Cook, 50, got engaged to his fiance Kelsi Taylor, 23, (pictured in August) earlier this year after dating for several years – and he admitted the pair joke about the 27-year age gap

Comedian Dane Cook is engaged to pilates instructor Kelsi Taylor, who is 27 years younger than him.

The couple got engaged in July of this year while on a trip to York Beach in Maine, where they had taken their first trip together five years ago.

Dane previously told People that he ‘was so ready to ask’ Kelsi to marry him.

‘I was completely zen about it,’ he said. ‘The evening of the proposal was incredibly beautiful, the weather was perfect, sunset was spectacular, and I was just quite simply very happy.’

As he has been writing new stand-up material, Dane has revealed he pokes fun at the age gap between himself and Kelsi, which she approves of.

He told E! News: ‘There’s even some fun at our own expense.’

Speaking to People, Dane added that he and Kelsi think it’s important to see the funny side of their age gap and make the joke before other people.

He said: ‘If we make the joke first and we’re laughing at it, you can’t really hurt us with that.’ 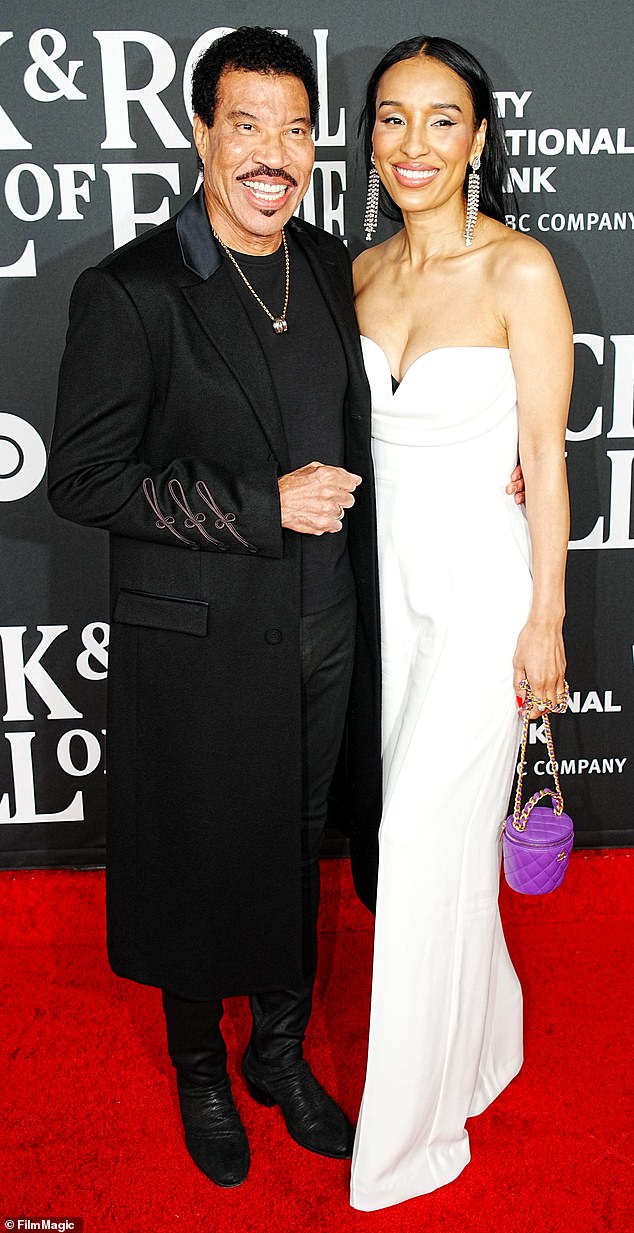 Lionel Richie and his girlfriend Lisa Parigi have an age gap of 40 years. Nonetheless they have been dating for around a decade

Music legend Lionel Richie and his partner Lisa Parigi have an age gap of 40 years – but they have proved that age is just a number to them as they have been dating for around a decade.

The American Idol judge rarely makes public appearances with his girlfriend, but they turned up to the Prince’s Trust Gala in New York City together earlier this year.

Although most details about their relationship are kept behind closed doors, Richie revealed a little about his love life to People magazine in 2019.

Reflecting on his failed marriages to Diane Alexander and Debra Harvey, the star said love is ‘not an exact science’.

He continued: ‘People don’t walk in love, people fall, which means you’re out of control, there’s no logic.’

Speaking about his current relationship Richie, who describes himself as a ‘hopeless romantic’, said of Lisa: ‘She’s extremely beautiful, but most importantly she’s smart and helps me deal with my crazy world.

‘At this time in my life when you can be so jaded about things, Lisa kind of makes everything feel a bit safe.’ 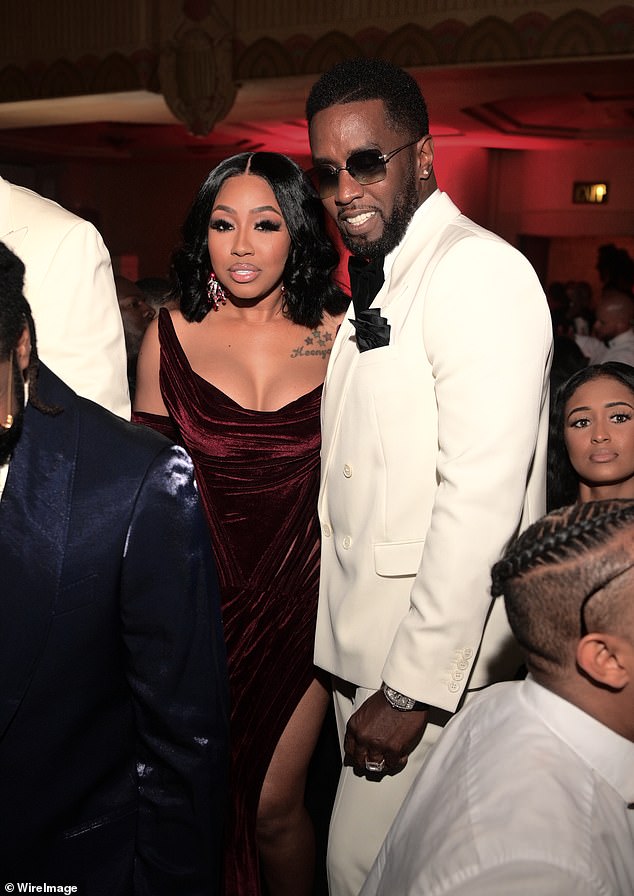 Rapper Diddy and Yung Miami, who have a 15-year age gap, are in an open relationship, meaning they can each date other people

Rapper Diddy has been in an open relationship with Yung Miami since 2021, and the pair have a 15-year age gap between them.

The couple revealed recently that their relationship is open, meaning they can date other people – and Diddy has certainly reaped the benefits of the arrangement.

Earlier this month the rapper, whose real name is Sean Combs, was spotted holding hands with influencer Shawntya Joseph, whose age is not confirmed.

As for his relationship with Yung Miami, the couple rarely share details of their relationship in public, although the 28-year-old attempted to shed some light on their arrangement earlier this year.

In an interview with XXL Magazine, she said: ‘He’s single, I’m single, but we’re dating. That’s what I mean when I say we go together.

Speaking about the music mogul’s attractive qualities, she revealed he is ‘very funny’.

She added: ‘That’s one thing I love about him. He brings out more confidence in me.’