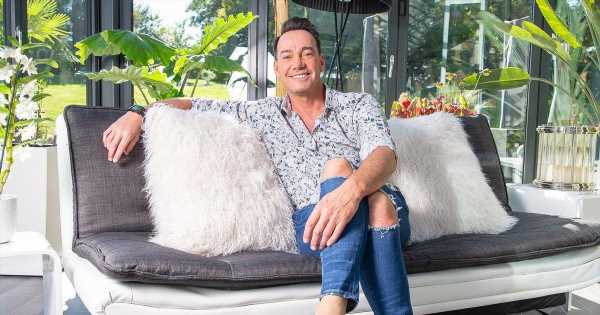 Helen Skelton, Will Mellor, Ellie Simmonds and Fleur East are just some of the names competing in this year's show to take home the very sought-after Glitterball Trophy.

And while the stars of the show always have our attention week after week, the judging panel is just as important.

Here, we take a look at the cosy homes Anton, Shirley, Motsi and Craig go back to when filming wraps up…

Craig Revel Horwood, 57, has sold up his modest Camden home, and now lives in a huge Salisbury mansion, with a pool and his fiance Jonathan Myring.

Fans caught a glimpse of the luxury pad when he exclusively invited OK! inside the property.

Outside the large pool can be seen, surrounded by cream cushioned seating, before we get a look at the bright, lavish living room with white walls, cream leather sofas, white fur cushions and a tropical plant.

In the background, a lit up “C” and “J” can be seen, which must stand for Craig and Jonathan. How sweet!

Jonathan shared a glimpse of the couple's large pool, while trying to clean it on Instagram.

In the clip we get further insight into the pair's pad, with views of a green lawn and an opulent gold Buddha statue poolside.

We also saw inside their luxurious bedroom, featuring a glittering silver wall and matching his and his mirrored dressing tables, on Michael McIntyre’s Christmas episode of Midnight Game Show.

Strictly Come Dancing judge Motsi Mabuse, 39, lives in a tasteful family home in Germany, with her husband Evgenij Voznyuk and their two-year-old daughter.

Motsi has shared a recent snap of herself curled up with a book, in her peaceful and modern living room, with neutral tones, a plush rug, grey L shaped sofa and boho style scatter cushions.

In another video shared to her Instagram page, we see a bright family room with lots of natural light.

Anton Du Beke, 56, is one of the show's best loved judges, and has been with the programme from the beginning.

The Strictly Come Dancing star even won Best Talent Show Judge at the NTA’s this year.

He shares a Buckinghamshire home with his wife Hannah and their twins, George and Henrietta.

The country home has references to the regency period, with large bay windows, high ceilings and pleated floor to ceiling curtains in heavy, rich fabrics. The styling is full of elegance and tradition – just like ballroom dancing.

Last year in an interview with Radio 5 Live, the star was complimented by host Anna Foster on his backdrop as he joined the conversation from home.

The 54 year old then responded: “I tell you, in our house it’s death by swags and tails let me tell you. We’ve got fringing, the whole malarkey. It’s like an abundance of fabric and it’s really quite nice actually.

“And I like to just sort of put myself in the little bay windows. It’s sort of quite regal, I quite like it really.”

Shirley Ballas, 62, is the head judge on Strictly. Shirley sold her Los Angeles home to move back to London this year, but we saw her Californian pad on Keith Lemon's Through The Keyhole on ITV and it was gorgeous.

The spacious home featured a large pool with a blue tiled floor and jacuzzi, with stone tiling around the garden and onto the terrace, and large tropical trees.

Inside, the lounge features a bright white tiled floor with a patterned rug, leather sofas and wooden beams on the ceiling – a style which could be called “California Casual”.

The kitchen is just as big, and features cream cabinets, marble tops and a massive island – a room perfect for entertaining. Out on the worktops are hot pink Le Creuset Utensils, and the double sized stove even features hot pink coloured dials.