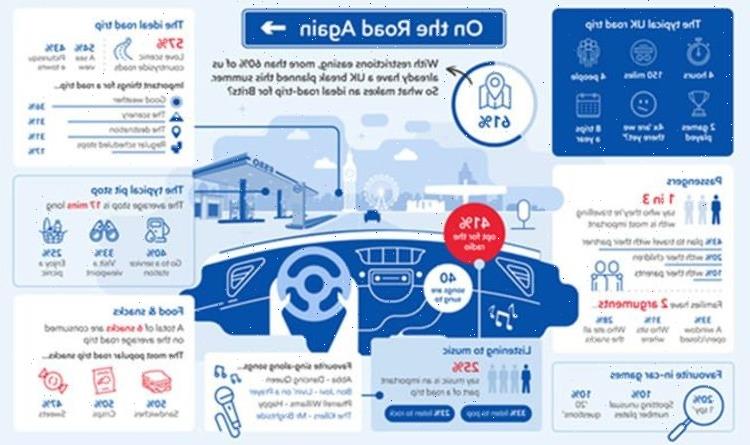 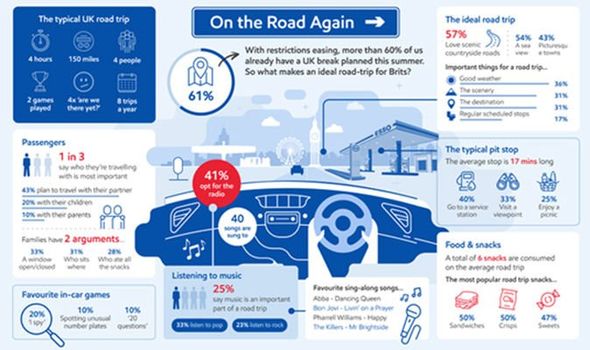 More than a third believe one of the most important aspects of a road trip is who they’re travelling with and three passengers and the driver was found to be the preferred number.

It also emerged the average year sees Brits go on eight road trips – with 61 per cent currently having one lined up.

Other important aspects for a road trip were good weather (36 per cent), the scenery (31 per cent) and the final destination (31 per cent), according to the study by Esso.

But one in six also believe regular scheduled stops are vital, with the typical ‘pit stop’ lasting 17 minutes.

And they usually involve stopping off at a service station (40 percent), visiting a viewpoint (33 percent) and enjoying a picnic (25 percent).

The study also revealed the favourite in-car games to play were I Spy (20 percent), spotting unusual number plates (10 per cent) and ’20 questions’ (10 percent).

Other popular games are Guess the tune, Spot the Animal and Yellow Car.

A spokesman for Esso, which is the technical partner of the Red Bull Racing Honda Formula 1 team, said: “It’s great to hear how many people already have a road trip planned for the near future now that we can travel further afield again.

“Road trips are more than just a quick car journey, they’re filled with games, music and snacks and an element of excitement no matter what age.”

The study also found almost a quarter consider music to be an important aspect of a road trip, with 41 percent opting for the radio while 33 percent listen to pop music and 23 percent prefer rock.

Abba’s Dancing Queen, Bon Jovi’s Livin’ on a Prayer and Pharrell William’s Happy were revealed as the go-to songs to singalong to in the car that transcend the generation gap.

While The Killers Mr Brightside is a firm favourite among millennials.

F1 driver Max Verstappen, who is no stranger to being behind the wheel, said of his road trips as a child: “The long rides I remember, were back in the day with my dad.

It also emerged surroundings are important to road-tripping Brits, with the ideal journey including scenic countryside roads (57 percent), a sea view (54 percent) and picturesque towns (43 percent).

Of the 67 percent of those polled via OnePoll who are parents, they face cries of ‘are we there yet’ four times during a typical journey.

And families have two arguments during each road trip – most likely about a window being open or closed (33 percent), who sits where (31 percent) and who ate all the snacks (28 percent).

The most popular snacks to pack for a drive were also found to be sandwiches (50 percent), crisps (50 percent) and sweets (47 percent).

A spokesman for Esso added: “With the typical UK road trip lasting just under four hours it’s important to keep everyone entertained.

“Esso’s Synergy Supreme+ 99 have put together a useful page of on-the-road tips here, to help you get the most out of your road trip this summer”