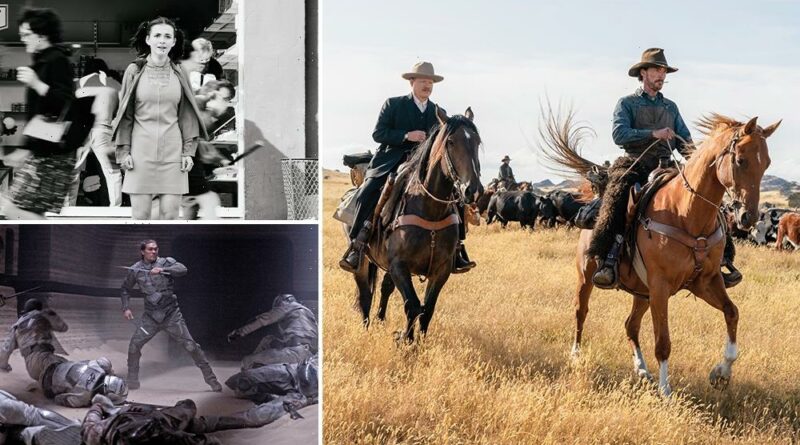 In some years, the most action-packed, stunt-filled films are also ambitious enough to find their way into Oscar’s best picture category. But for every “1917” and “Mad Max: Fury Road” there are 10 “Fast and Furious” and “Taken” films — where the action is center piece.

Yet movies driven more by character and story than by fisticuffs and explosions still feature stunts, and they often come at crucial moments. While they may not require a Bond escape or a Bourne fight, they need to be dynamic and exciting while serving the context of the larger story.

This year’s best picture nominees included “Belfast” (riots and explosions), “Nightmare Alley” (brutal beatdowns and a vicious hit and run), “Power of the Dog” (men on horseback), “West Side Story” (dancing, sure, but still fighting), “King Richard” (tennis, sure, but still a battle) and “Dune,” which with its futuristic sword play and scenes of war, is the one film on a blockbuster budget.

Jamie Jones, stunt coordinator for “Nightmare Alley,” says the combination of an emphasis on theme and story and the fact that these films have fewer action scenes than a comic book-based movie means that each of those moments carries greater weight and must convey more about the emotional arc of the characters.

For most of “Nightmare Alley,” people wield power with words and wealth, so when Stan (Bradley Cooper) bludgeons Grindle (Richard Jenkins) and then slams his car — not once, but twice — into Anderson (Holt McCallany) near the film’s end, his actions must convey his mounting desperation and inherent ruthlessness to a stunned Molly (Rooney Mara) and to the audience.

James O’Donnell, the stunt coordinator for “Belfast,” agrees with the idea that the stunts can’t just be exciting but must fit the themes and story.

“You can’t just blow something up,” he says.

Despite having less to do and less money to do it with, these stunt coordinators say they prefer these types of assignments — even knowing, Jones says, their work will be overlooked by audiences more than they would in a thrill-seeking film.

“Telling a personal story that is ambitious in scope and has an emotional journey brings a different satisfaction from doing a big blockbuster,” adds O’Donnell. “I love doing movies like ‘Kick Ass.’ So I say this with the greatest respect — I love blowing things up and jumping off buildings — but one’s a circus where you sit back and enjoy the spectacle of it and one you lean forward and are involved in.”
Tom Struthers, the stunt coordinator for “Dune,” agrees.

“I really do like story-driven films, which I know sounds crazy coming from a stunt coordinator and second unit director for the action scenes,” he says. “When it’s only action I approach it very differently because a lot of times you can’t make sense of it. But when you have directors like Spielberg, Nolan and Denis Villeneuve, you have action driven by the story and character so you’re much more creative in your approach to those scenes.”

On “Dune,” Struthers tasked different people with devising distinctive styles of fighting for the different factions in the “Dune” universe: House Atreides, House Harkonnen, the Fremen and the Sardaukar. “I didn’t want all the fighting styles to look the same,” Struthers says.

Best picture nominees are typically the product of directors with a singular vision and these stunt coordinators say that includes attention to every detail.

Darren McGuire, who worked on the “Nightmare Alley” stunts in the preparatory stages, says director Guillermo del Toro was “super-specific in the endeavor of telling his story. He ties everything together and knew how he wanted that car hit to look because if it wasn’t brutal and shocking it wouldn’t put you in the head space for what comes later.”

Many of the stunts feature doubles, but the stars are often involved as much as possible, creating different levels of challenges and opportunities for the coordinators.

Struthers says Jason Mamoa, who works closely with his stunt double, was easy to choreograph for as the character Duncan Idaho.

“You’re getting a large instrument to carve through everything,” Struthers says.

But he was concerned about Timothée Chalamet, who as Paul Atreides, must train with Josh Brolin’s character and then fight a deadly duel later in the movie that shows his character’s development.

“I wasn’t sure he could pull it off,” Struthers says, “but when I watched the finished product I was pleasantly surprised. He came across better than I honestly thought he would.”

Eric Taino, the Beverly Hills tennis pro who trained Saniyya Sidney and Demi Singleton to be Venus and Serena Williams on the court in “King Richard,” was starting from scratch — and Sidney was a lefty who had to learn to play righty.

“It was easier that they were blank slates, they didn’t say, ‘Here’s how I hit my ball,’” Taino says. The serve, with all the moving pieces and the Williams’ distinctive motions, was the biggest challenge.

“Both girls were athletic and coordinated so [they] pick things up pretty quickly. They had a background in dance so they were pretty good about breaking things down and finding a rhythm.”

Beyond the months of pre-production training, Taino would do specific drills during filming based on what would be shot the next day. “If they’d gotten thrown into too much at once, while trying to act, it would get very complicated,” he says. “You have to plan ahead.”

But you can only plan so much, Struthers says: “You need a good base to work from but you can’t be locked in because things will change.”

Taino says when he was feeding the girls balls from off camera they could control the outcomes, but that the tennis equivalent of stunt doubles — the professionals and college players — acting out long points in match play could not be choreographed with the precision of, say, actors dueling with swords in “The Tragedy of Macbeth.”

“If we said hit a forehand here, then a backhand to that exact spot it didn’t look real, it looked stiff,” Taino says. “We changed the approach and just said, ‘We want this kind of point,’ say, one where Venus wins and finishes with an aggressive shot.’ Then the energy was better and the points flowed freely.”

For “Nightmare Alley,” Jones says the foam car McGuire and del Toro planned to use to hit McCallany’s character worked well in some regards but that on the (very cold) night of filming, the clothing would grab the foam, causing the stunt double to twist too much.

“We needed him to fly off the back with enough height to smash down on the hood and then smash down on the ground,” Jones says. (He adds that McCallany was game to try it himself but that Jones spent 45 minutes talking him out of it, which the actor later appreciated.) “The car and rigging cost $100,000 but to fix the problem so he could slide the way Guillermo wanted without twisting, we taped a 50¢ garbage bag on the car.”

Those moments may not be the scenes audiences walked out of the theater talking about but they were essential to these films’ overall impact, Struthers says. “And these films will live on and be something you’d be proud to have seen in one hundred years’ time.”