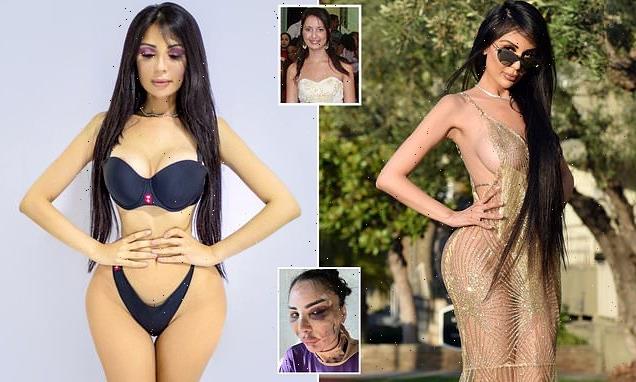 Surgery addict, 29, who spent £500,000 transforming into a Kim Kardashian-looklike reveals she’s forked out another £100,000 on facial procedures to ‘detransition’

A former Versace model who spent almost half a million pounds on surgery to turn her into a Kardashian lookalike has revealed she’s now forked out another £100,000 to ‘detransition’.

Jennifer Pamplona, 29, who is originally from Brazil but now lives in Dubai, has spent the past seven years going under the knife and pumping her body with fillers to fulfil her ultimate quest to look just like Kim Kardashian.

But she soon realised that looking like the world’s most famous family was not all it was cracked up to be – and wished she’d never started the surgeries.

Despite attempting to change by adjusting her hair colour and clothes, Jennifer still felt as if she looked the same as the Kardashians, so it was time to go back under the knife for some drastic changes. 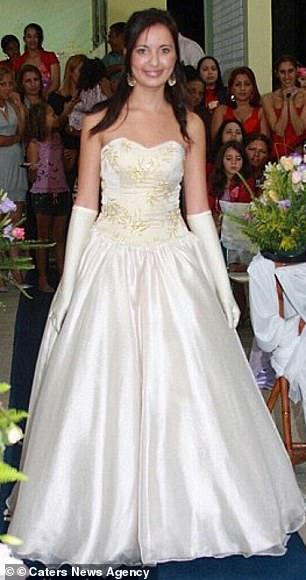 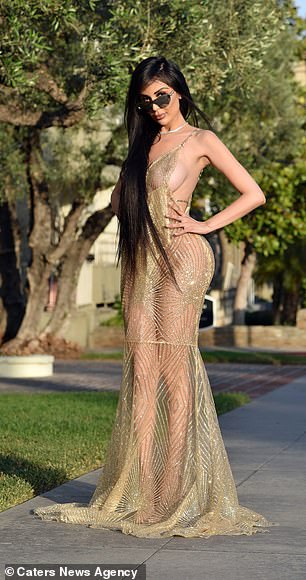 Jennifer Pamplona, 29, who is originally from Brazil, before she started having surgery to transform her appearance (left). The surgery ‘addict’ spent almost half a million pounds on surgery to turn her into a Kardashian lookalike (right) 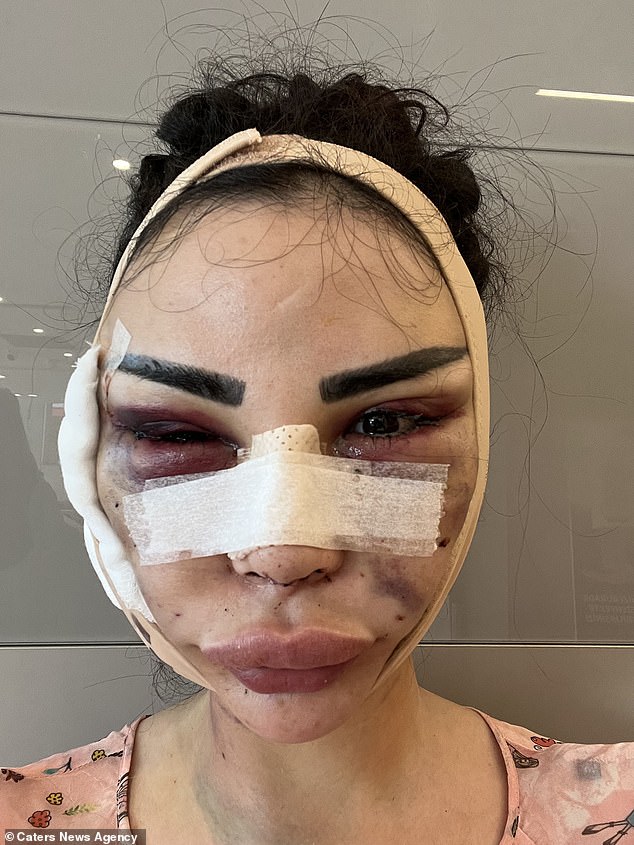 Jennifer had a face and neck lift, buccal fat removal, cat eye surgery, a lip lift, and a nose job all in one to completely change her face

Jennifer explained: ‘I was going through so many different surgeries to have the signature Kardashian style.

‘I was happy having this Kardashian style look, it made me money and I enjoyed life. I was happy, but now, I just want to be recognised as who I really am.

‘I would look in the mirror and people would call me a Kardashian and then it started to get annoying.

‘I had worked and studied and I became business woman. I had done all these things and all these achievements in my personal live but I was doing was being recognised by looking like a Kardashian.’ 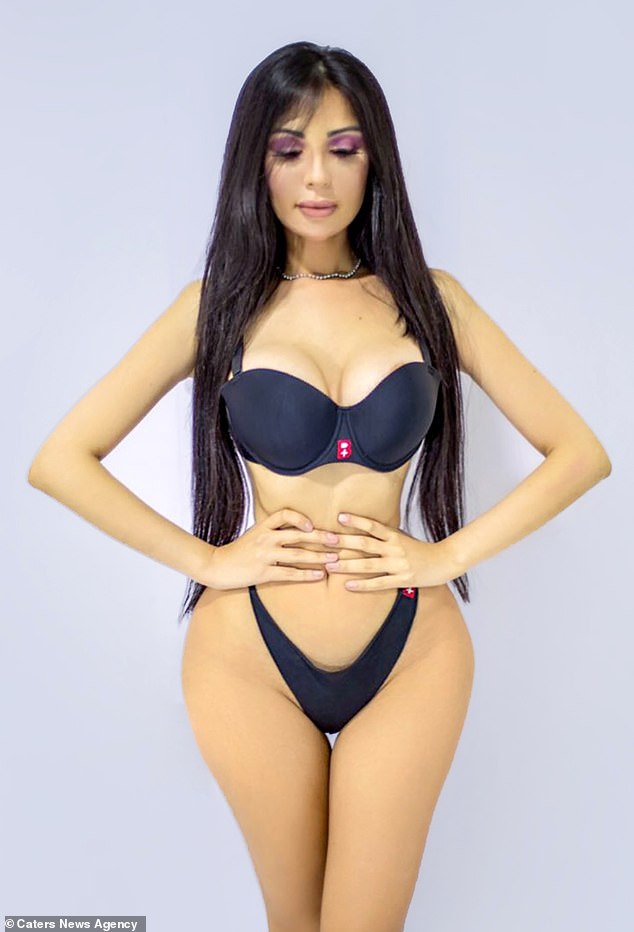 As well as having six pints of fat injected into her bum, Jennifer had two nose jobs, eight ribs removed, two breast enhancements and liposuction to achieve her goal of 39-inch hips and 21-inch waist

The Brazilian-born model now lives in Dubai, and has launched her own cosmetics company, as well as making investments and also some acting on the side, whilst making money from being a Kardashian lookalike.

Getting her first boob job at 17, and the start of her surgery history, Jennifer claims she was addicted to surgery and has been ever since.

Jennifer added: ‘Now I don’t want to be a shadow of someone else, I want to be my own person.

‘I never intended to look like a Kardashian and I didn’t want to, but when people made this comparison, I took the opportunity and made it a big deal. It brought me fame and money.

‘But I knew what I wanted to be, and I had a plan that when I turn 30 I’m going to stop with the Kardashian look. 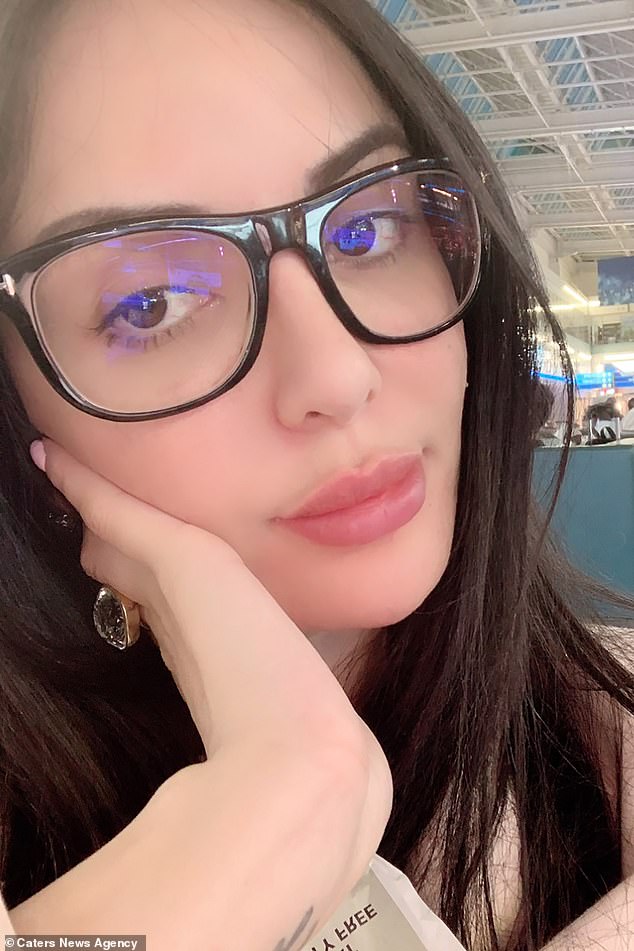 Jennifer, pictured before her most recent facial surgery, said that her goal was to ditch the Kardashian look by the time she was 30 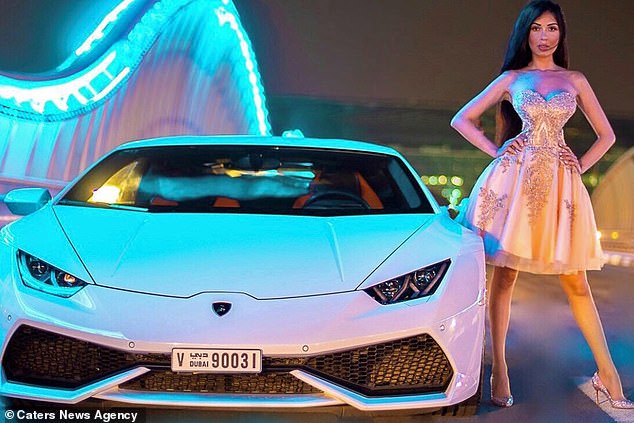 Jennifer said it was never her attention to look like a Kardashian, but at first she relished the attention and money it brought her

‘So I found a doctor in Istanbul who could completely change my face. I saw on the computer beforehand how I would look and it was like I was having a rebirth.

‘I first started with my veneers we changed the fake look of the veneers made them look a lot more natural.

‘I then had a face and neck lift, buccal fat removal, cat eye surgery, a lip lift, and a nose job all in one.

‘I basically had five procedures done in one, but from all of the surgeries I have had, this one has been the most difficult. I went into the operation room as one person and I came out as another.

‘The first time I saw myself I thought wow, is this really me. I had to deal with the new me, as this was the choice I made, it is what I asked for.

‘Although, the after effects of the surgery weren’t good at all. This isn’t the first time I have been in this situation, but this time I suffered the worst. 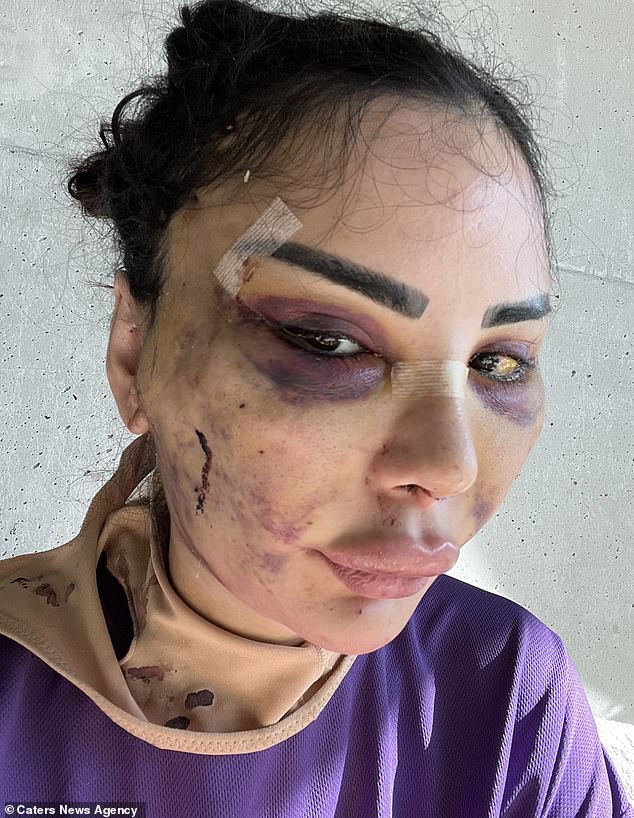 ‘My left eye wouldn’t close from the cat eye surgery and I was panicking, I thought I was going blind. My surgery became a nightmare and it’s as if they hit a nerve.

‘I feel like people don’t have the courage to show the bad side of surgeries that make you look good but I want to show the truth behind what can really happen. There is a dark side but no one wants to show it because they want to just show the beauty.

‘I couldn’t even move my face, I know it was a huge procedure, but it is put on social media like a normal surgery. It’s taken me seven years understand different procedures and I have the knowledge to know the risks.

Jennifer lived for seven years as a lookalike Kardashian, which brought a lot of attention to her life after multiple different surgeries and procedures. However, she now wants to step away from a Kardashian shadow and focus on being herself after losing herself to the addiction she faced.

She is now working on a documentary in August called ‘Addiction’ which is highlighting the real issue around surgery addictions, in which she claims will shock people as to the reality of what surgery addiction is and what Jennifer has gone through herself, although she is on the hunt for a new company to continue production.

Jennifer explains: ‘I have lost count of the surgeries I have had, if I was to guess, it is over 40. It was an addiction and I got into a cycle of surgery equals fame and money, I just lost control of everything I went through a lot of hard times.

‘At one point I was just having surgeries to look like a Kardashian, I couldn’t do my own things like acting, as I was just known as a Kardashian lookalike.

‘I became upset that I couldn’t show for how much I had worked and studied. People could only see the Kardashian lookalike not the real me.

‘This has been my most expensive surgery I have had at £100,000, because I have changed each part of me and my skin. It was an investment but by far my favourite surgery.

‘I have suffered with judgement for so long that I don’t want it anymore, I don’t care anymore.

‘I show everything, even the close to death situations. It isn’t beautiful but it’s the truth.

‘I’m not against plastic surgery anymore if you go to good doctor, but it’s important to show the truth, there are people make it look good on Instagram but life isn’t perfect, and being addicted to surgery isn’t a good thing and I want to show the good and the bad.

‘I look at my life and look at how I have made it from this girl who came from a village in Brazil, to girl with the thousands of surgeries to become famous. I started from the bottom, I told grandmother I will be famous.

‘I know I cant change my life, but I am going to use it to help others. I have found myself and it is beautiful. 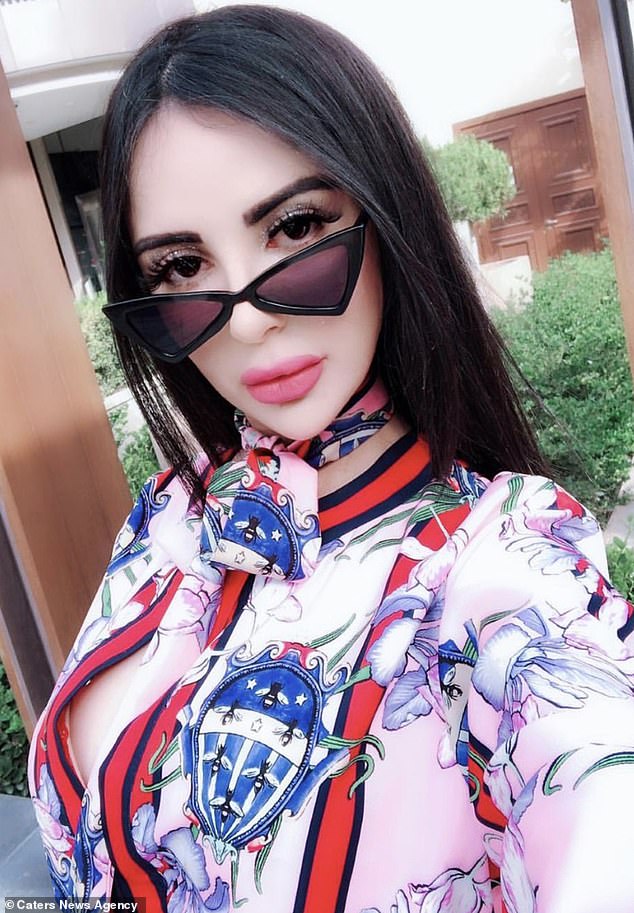 Jennifer lived for seven years as a lookalike Kardashian, which brought a lot of attention to her life, but she found that people didn’t take her seriously as a businesswoman 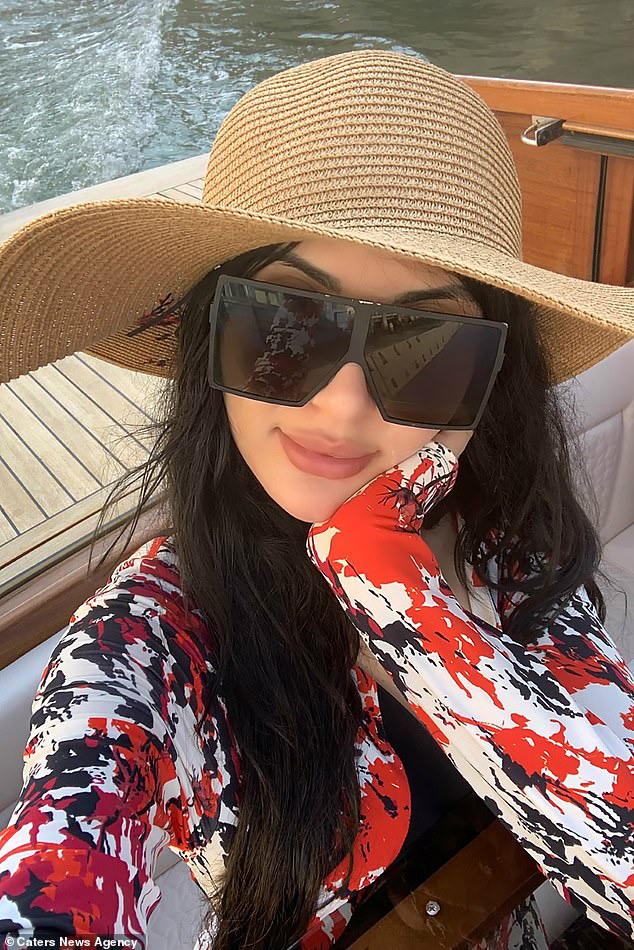 Is that you Kim? the surgery fanatic had multiple procedures, includig a nose job, to change how she looked 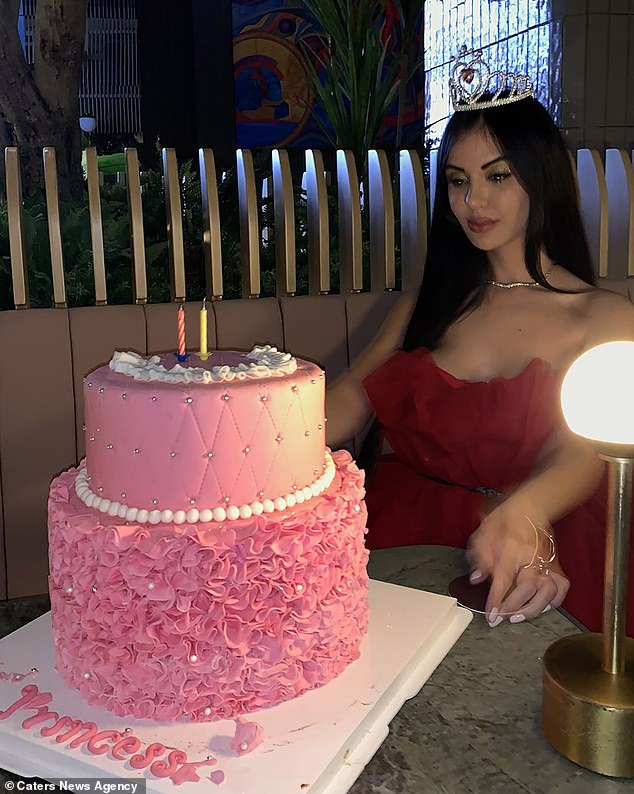 ‘People can call me stupid or a hypocrite as I am changing my whole look but I am getting experiences on myself and learning from myself.

I want to complete my life purpose.

‘I discovered that I was addicted to surgery and I wasn’t happy, I was putting filler in my face like I was in the supermarket, but this can happen with teenagers now. It is crazy and it needs to change.

‘I opened a foundation in the pandemic which is called JP mental health, with my friend Doctor Gustavo Zangueta, and it is there to help people in Brazil to recover from mental health issues.

‘I also want it to focus on body dysmorphia issues as that what I was suffering from. If someone told me 12 years ago what was going to happen I wouldn’t have struggled so much.

Even though Jennifer is used to having different surgeries, this final surgery hasn’t been as smooth as she expected.

Her face was sore and infected, spending a month in Turkey alone recovering from the life changing procedures. 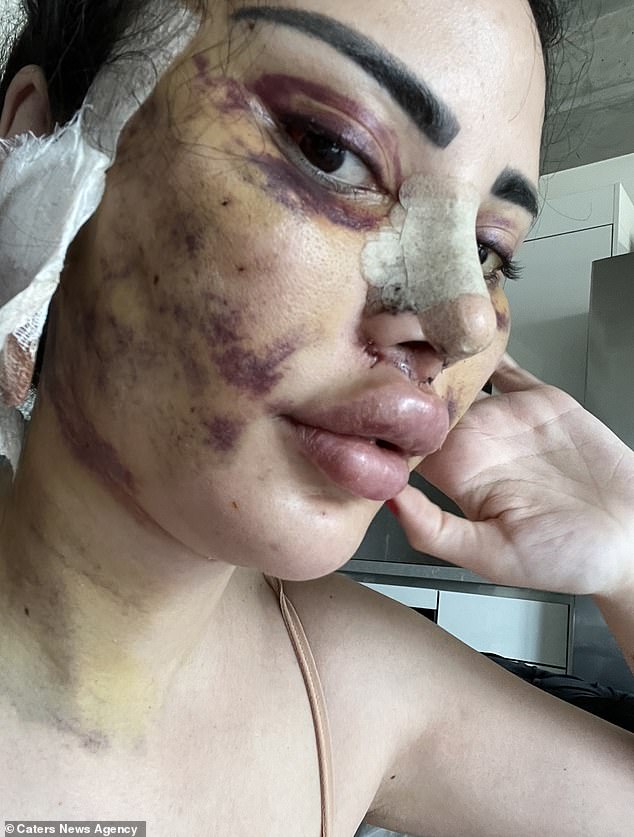 Jenniger was sore after surgery and got infections, meaning she had to stay in Turkey for a month recovering. She said that despite all the procedures she’s been through, the most recent was by far the most difficult

Jennifer explains: ‘I started bleeding a lot from my cheeks and it continued for three days. I was so scared I would get sepsis.

‘I was struggling with sickness, I have never felt so ill and when I was finally checked over my blood was very low, and my cholesterol was very high.

‘I started to panic, thought I was going to have a blood transfusion here in Turkey.

‘I was fighting for my life and my voice had gone, I thought I was dying. I was thinking to myself, what the hell have I done with my life.

‘It’s sad because people make me feel like it’s my mistake and people always judge me, but this post surgery nightmare was a medical mistake, not mine. 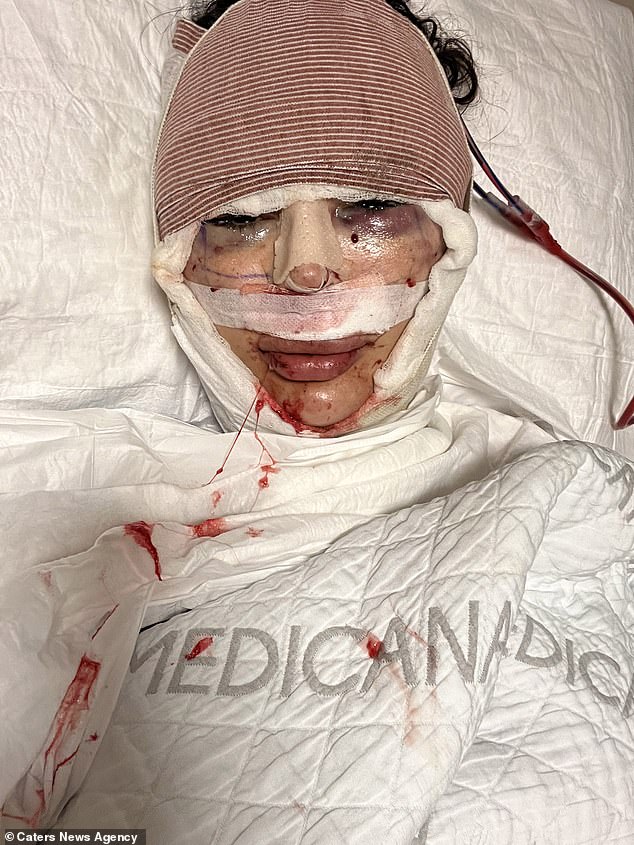 Jannifer, pictured after her most recent surgery. She admits that she felt like she was ‘dying’ afterwards, after suffering intense pain and low blood pressure 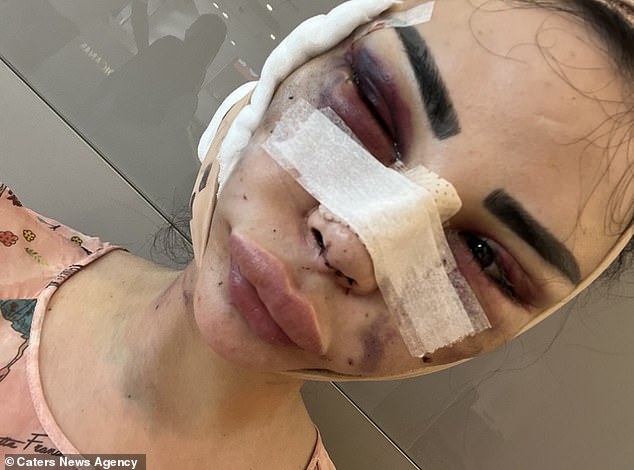 Startting to heal: Jennifer said that she;s determined to show the dark side of surgery

‘I was pushing myself to eat I needed to feed my body to continue fighting.

‘But the best feeling was knowing I wasn’t in a fight with myself anymore, I was now who I wanted to be and I really now understand the meaning of life.

‘This surgery has been a very difficult moment in my life, I don’t want people to think my life is a joke. I want to help people and inspire them. I have a teen cousin and she is following my steps with modelling and acting.

‘Those people who look up to me, they need to know that there is a dark side to life. I carry a lot of responsibility, especially for my family and my fans.

‘I will continue to be honest and show the good and the bad, I don’t filter anything I am honest and I feel like I can help a lot of people with my life story, but my face is beautiful and now I look even more beautiful.’