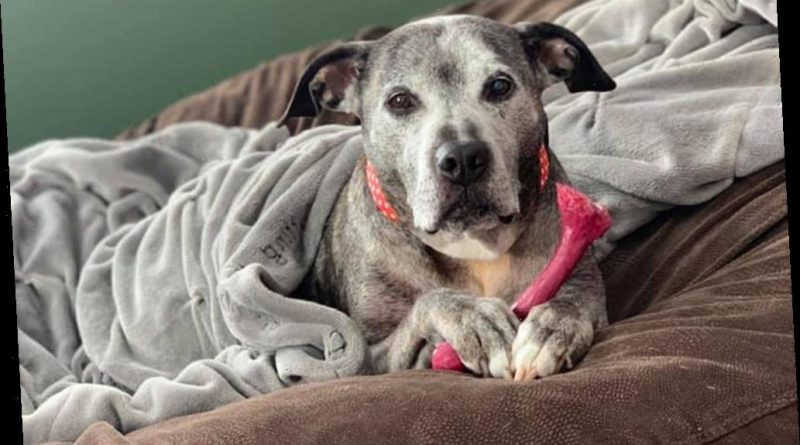 A pit bull who was found beaten, tied up, and frozen to the ground has finally moved into a forever home after spending a decade in the shelter system.

According to a release shared with PEOPLE, Tatiana arrived at Mackenzie's Animal Sanctuary in Lake Odessa, Michigan, in 2012, after she was saved the previous year. Her rescuer found the dog after she had "been beaten with a bat, her mouth muzzle-bound with electric tape and her legs hog-tied."

A man named Ernie Moss found Tatiana (nicknamed "Tater Tot" and "Taters," according to a Thursday Facebook post by the Capital Area Humane Society [CAHS]) "nearly frozen to the ground" in January 2011, and quickly freed her from her bindings.

"In less than a half hour, CAHS had arrived to the unimaginable scene. It took nearly that time for Ernie to free her limbs and mouth," the group, who cared for Tatiana for a year and a half, continued in their Facebook post.

"It was evident from the very beginning that being restrained, and left in the cold for dead, was not her only worries," CAHS said. "With only a quick glance, it became obvious that she was suffering from extensive injuries to the head. She was immediately transferred to a local veterinary office for care and diagnostic testing." Luckily, Tatiana's "X-rays came back negative and quelled fears of a fractured skull that would significantly complicate recovery," CAHS continued. "Likewise, images of her chest and stomach showed no reason to fear further damage, outside of the severe contusions to her head."

But "justice was not served" for the canine, whose abuser "pleaded no-contest to a misdemeanor animal abandonment charge, and only spent 44 of his 93-day sentence in jail," according to CAHS.

"In addition, he was ordered to pay $10,000 in fines and restitution to CAHS for the 18-months of care and medical bills. To this date, we have not received the restitution," they added.

Tatiana was transferred to Mackenzie's in October 2012, where she "has been very loved and well-taken care of by their wonderful staff and volunteers," CAHS shared on Facebook. In the release from Mackenzie's, the sanctuary said that their staff "got to work building Tatiana's trust" and helping her with her "aggression toward other dogs" as soon as she arrived.

"She was fearful around people, especially men, which was understandable given what'd she'd been through," they said. "It took many years for her to trust new people and feel safe, but she became a volunteer and staff favorite."

Once Tatiana reached senior age, it became even more of a hurdle to find her a family, as "not many people want older pitties who need to be the only pet in the home."

"That's when one of Mackenzie's amazing volunteers stepped in and offered to foster Tatiana full-time," the sanctuary shared in their release. These volunteers, a woman named Michelle and her husband, are now Tatiana's pet parents.

"Mackenzie's established volunteers are able to permanently foster the rescue's harder-to-place dogs. After everything Tatiana has been through, she'll now get to spend her golden years in a loving home," Mackenzie's added.

Those who wish to sponsor Tatiana can do so online at mackenzies.info.