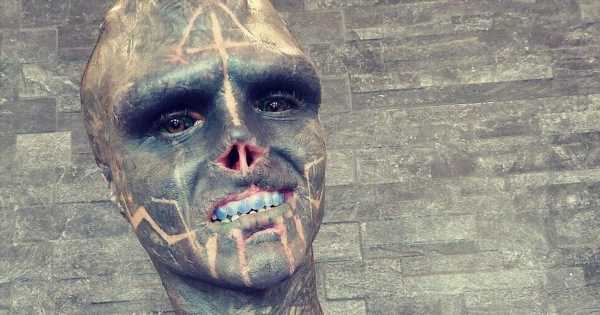 He's spent years and thousands in cash turning himself into a 'black alien'.

Frenchman Anthony Loffredo has tattooed his entire body black – including his eyeballs – had his tongue surgically snipped to appear snake-like and removed his nose, leaving a gaping hole in the middle of his face.

He's also had multiple implants inserted under his skin to enhance his extra-terrestrial look.

And now one of extreme body modification fan's million-plus followers on Instagram has asked the question which many have probably been wondering for a while – what does he have planned for his genitals.

"When are you going to cut your *aubergine emoji* off?," asked Instagram user highalpineshrimp, a question which provoked some widely different reactions from others.

"What the f***?" replied one, while another added, "How is that medically possible?"

But a third backed the original post saying, "Well, lots of people bisect their tongues nowadays, so I guess I can see where he's coming from."

Loffredo himself previously hinted back in May that he's planning to do something radical to his genitals.

Having already gone to the drastic lengths of lopping off some fingers to create a 'claw hand', the 33-year-old had alluded to cutting his manhood in half by posting an illustration of two penises attached to the same scrotum, although one which only appears to contain a single testicle.

"Besides vital organs, a lot of (body parts) can be easily bisected without causing damage," added an Insta user called personalitydinosaur.

"During pregnancy the abdominal muscles naturally split apart to allow the womb to grow. So yeah, tongues and penii can be cut in half."

Not everyone was convinced, however.

Whatever the outcome though, it's unlikely Loffredo has finished altering his appearance in eye-watering ways.

He's previously described his mission as having helped him develop "inner peace."