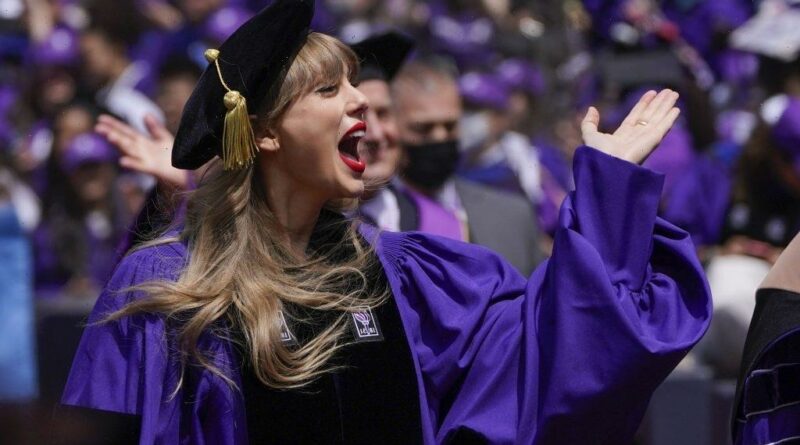 “I’m 90% sure the reason I’m here is because I have a song called ’22,’” quipped Taylor Swift, delivering the commencement address for New York University’s class of 2022 at a graduation ceremony held Wednesday. The pop superstar was awarded an honorary doctorate before giving a playful and reflective speech that was… no, not 22, but a little over 23 minutes.

“Last time I was in a stadium this size, I was dancing in heels and wearing a glittery leotard,” Swift noted. “This outfit is much more comfortable.”

Swift did not allude to many of her hit songs during the address, but did give in to the inevitable when she told out-of-town friends and relatives of the graduates, “Let me say to you now: Welcome to New York — it’s been waiting for you.”

She continued, “I’d like to thank NYU for making me technically, at paper at least, a doctor. Not the type of doctor you would want around in case of an emergency, unless your emergency” is how to come up with a hook accompanied by “an intensely cathartic bridge section. Or if your emergency was that you needed a person who can name over 100 breeds of cats in one minute.”

Swift congratulated the graduates for getting through under unusual circumstances, since “everyone in college in normal times stresses about passing tests, but on top of that,” today’s students had to think about passing weekly COVID tests.

Contrasting herself with the grads’ histories of formal education, the singer-songwriter noted that she did drop out of formal schooling after the 10th grade, at which point the rest of her high school consisted of her mother home-schooling her while they sat on the floors of airports as Swift went out on radio tours. These weeks-long visits to country radio stations consisted, she said, “of a rental car, motels and my mother and I pretending to have fights during boarding so that no one would want the seat between us on Southwest.”

Moving on to what she called “unsolicited advice,” Swift urged the graduating students to “learn to live alongside cringe. No matter how hard you try to avoid being cringe, you will look back on your life and cringe retrospectively. Cringe: unavoidable over a lifetime. Even the term cringe might someday be deemed cringe. ” She promised that even some of the things students are doing or wearing today are things they will “find revolting and hilarious. For example, I had a phase where, for the entirely of 2012, I dressed like a ‘90s housewife.”

On a more serious level, she said, “I’m a big advocate for not hiding your enthusiasm for things. It seems to me that there is a false stigma of eagerness in our culture of unbothered ambivalence. … Never be ashamed of trying. Effortlessness is a myth. The people who wanted it the least are the people I wanted to date and be friends with in high school. The people who want it most are the people I now hire to work for my company.”

Swift told the grads that all of them are writers, to some extent, like she is. “I’ve made and released 11 albums and in the process switched rom country to pop to alternative to folk. This might sound like a very singer-songwriter-focused line of attention.” But, she said, “You write differently in your Instagram stories than you do in your thesis… We are all literary chameleons, and I think it’s fascinating.”

The singer touched at length on backlashes she has received since being in the public eye starting at the age of 15. “Being the youngest person in every room for over a decade meant that I was constantly being issued warnings… Every interview I did included barbs about someday running off the rails…  I became a young adult while being fed the message that if I didn’t make any mistakes, all of the children of America would grow up to become perfect angels… It was all centered around the idea that mistakes equal failure, and ultimately the chance at a happy, rewarding life. This has not been my experience. My experience has been that my mistakes led to the best things in my life. Getting back up, dusting yourself off and seeing who still wants to hang out with you…that’s a gift.”

Alluding to the period in which much of America seemed to be taking sides in what was seen as a war of credibility between her and Kanye West and Kim Kardashian, she admitted, “Getting canceled on the Internet and nearly losing my career gave me an excellent knowledge of all the different types of wine.”

“I know the pressure of living your life through the lens of perfectionism. And I know I’m speaking to perfetcionists because you are here today graduating from NYU,” she said. “In your life, you will inevitably misspeak, trust the wrong person, under-react, hurt the people who didn’t deserve it, overthink, not think at all…. hit rock bottom, and finally address the pain you caused… Rinse, repeat… I’m not gonna lie. These mistakes will cause you to lose things.

“As long as we are fortunate enough to be breathing, we will breathe through, breath deep and breathe out. And I am a doctor now, so I know how breathing works.”

In conclusion, Swift said, harking back to that hit of some years back, “Let’s keep dancing like we’re the class of ’22.”

Swift received her Doctor of Fine Arts honor from Jason King, chair of the Clive Davis Institute of Recorded Music, part of NYU’s Tisch School of the Arts.

Earlier in the morning, Swift posted to Instagram and TikTok a short montage showing herself traveling through New York before and after donning her cap and gown, and of her father taking snapshots of her in her graduation gear.

Three graduating classes will be honored that day. Swift will be part of what is described as a “traditional” ceremony for the current graduating class on the morning of May 18. Separately, in the evening, the university will be holding a “double-header” commencement for the classes of 2020 and 2021, who weren’t able to have a traditional ceremony earlier due to the pandemic.

Disability rights activist Judith Heumann will address the graduates at Yankee Stadium at the evening ceremony. Heumann was featured in the film “Crip Camp: A Disability Revolution,” which was nominated fo best documentary at last year’s Oscars. She is the author of the 2020 book “Being Heumann: An Unrepentant Memoir of a Disability Rights Activist” and produces the podcast “The Heumann Perspective,” which features members of the disability community. Other honorary degree recipients include Lonnie Bunch III, Susan Hockfield, Jill Lepore, and Félix Matos Rodríguez.